Barcelona chief Alemany tells Dembele 'GET OUT': We expect sale before Jan 31

Rangnick revolution: What can Man Utd expect from tactician lauded by Klopp and Tuchel?

With Ralf Rangnick set to take charge of Manchester United, change is expected at Old Trafford. Rangnick is regarded as one of the major influences on some of today's best managers, including Chelsea's Thomas Tuchel and Liverpool's Jurgen Klopp. He also has a reputation for bringing a specific style of football with him to each club he manages.

Following the dismissal of Ole Gunnar Solskjaer, Michael Carrick has taken on the interim manager role while Manchester United look to confirm Rangnick's appointment, pending a work permit. Last weekend's trip to Chelsea was Carrick's first league game in the temporary position, and he made a change of defensive shape, going for a narrow 4-3-3 that saw Jadon Sancho join Bruno Fernandes and Marcus Rashford up front. Controversially, Cristiano Ronaldo was benched.

After the game, Carrick was asked if Rangnick had a say in the decision, and he denied the idea, taking responsibility for the shape. Nonetheless, it may be a nice coincidence that the man United are about to hire also has a preference for a back four, and a narrow shape. In his last managerial stint, with RB Leipzig in 2018/19, Rangnick settled on a 4-2-2-2. In the 4-2-2-2, Rangnick's United could look something like this: 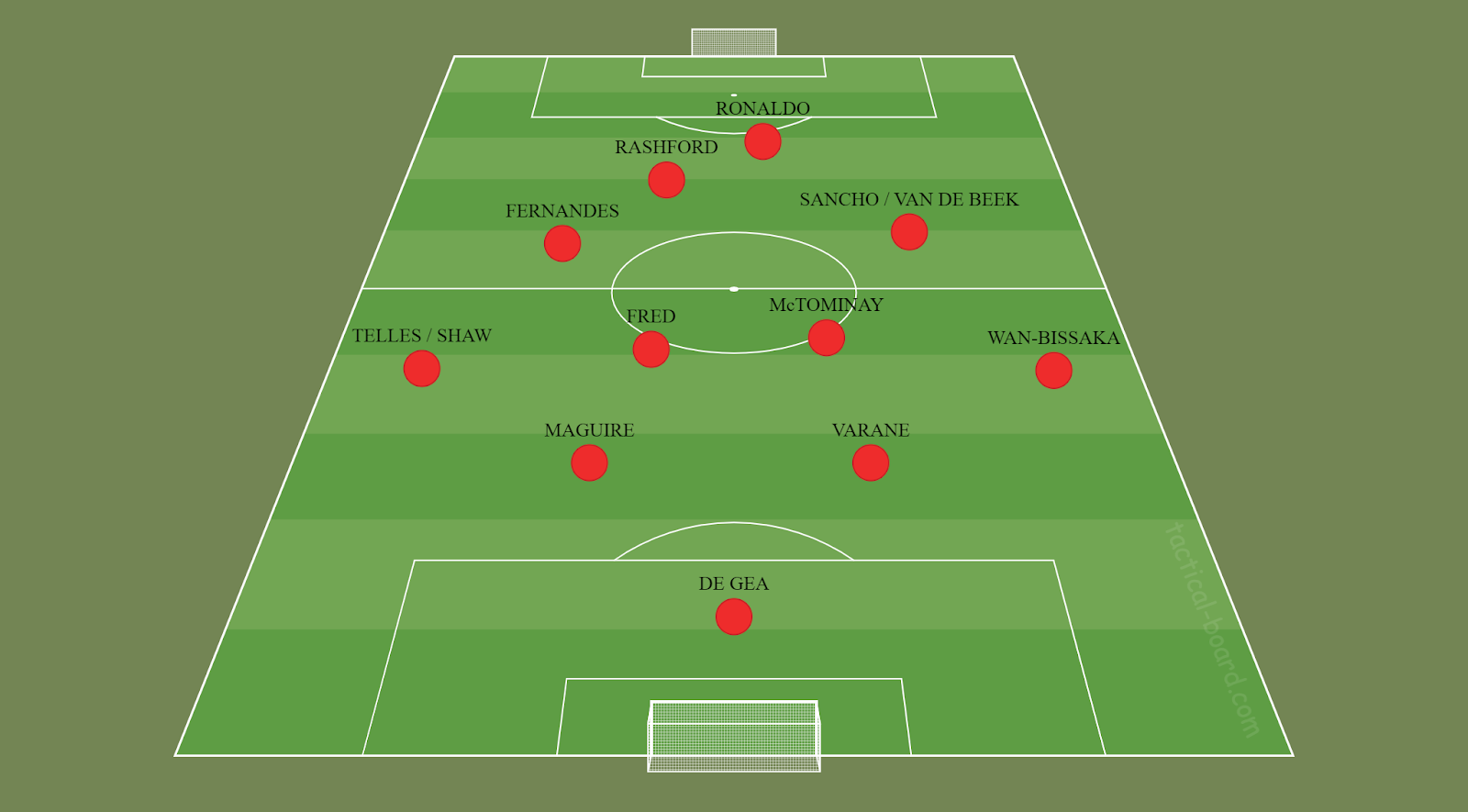 Another recurring theme with Rangnick is high pressing intensity. He has cited winning the ball back within eight seconds as an aim trained into his players. However, Manchester United are not renowned as a 'high pressing' team. According to Understat, they are 13th in the Premier League when it comes to Passes Per Defensive Action (PPDA) - a metric that shows how many passes, on average, teams allow their opponents to make before being forced into a turnover.

Against Chelsea, the narrow 4-3-3 Carrick chose also came with a renewed intent to press intensely and as a unit. United's PPDA in this game was 16.7. That doesn't sound particularly great, but it was significantly better than in previous big games against City (23.47) and Liverpool (a whopping 60.71).

Of course, the increased intensity versus Chelsea may be partially explained by a reaction from the players, who know they have a new manager to impress. It won't necessarily be repeated week after week. And there is also the reality that Ronaldo, who will not be happy on the bench, is not exactly regarded as a pressing machine.

Rangnick will no doubt look to improve the team's defensive organisation and make high-intensity pressing the standard. And if he continues with the narrow 4-3-3, it may actually alleviate the Ronaldo issue - playing in a narrow frontline with teammates close to him will reduce the distance the Portuguese has to cover laterally during pressing.

Rangnick has discussed using a tailor-made 'countdown clock' in training to enforce awareness in his players that they have to win the ball back within eight seconds. Once they have the ball, the same clock is used to encourage them to get a shot off within 10 seconds. He wants attacks to be intense, just like the pressing, and will not want United to pass backwards and sideways too often.

This is another area where Rangnick will seek an increase in tempo. Fortunately for him, United's squad is built for fast attacking play. Bruno Fernandes is an effective 'runner', playing off a striker and getting into scoring positions. The same can be said of Donny van de Beek and Jesse Lingard. Then there is Rashford, Jadon Sancho and Anthony Martial, all of whom can inject speed to the attack. And even at 36, Ronaldo can still provide a good, quick burst to get in behind.

Revitalising the quick attacking play should simply be a matter of Rangnick providing more structure and restoring confidence in the squad. It would not be a surprise to see him use a frontline like he had at Leipzig, with Yussuf Poulsen the focal point occupying the centre-backs and Timo Werner playing slightly off-left. Ronaldo could be United's Poulsen, a target for direct play, while Rashford, Martial or Mason Greenwood could be their Werner, lurking between defenders.

Against Chelsea, Manchester United used a narrow defensive shape, pressed with more intensity and filled their attack with pace. Rangnick will make his own decisions, but these themes can be expected to continue.