Berbatov warns Man Utd ace Fernandes where he must improve

Leicester City's record-breaking win at Southampton kicked off an entertaining weekend of Premier League action that saw the previous week's paltry tally of 17 goals more than doubled. The highlight was perhaps Friday's non-contest, although Liverpool and Tottenham gave us one of the most pulsating Big Six clashes of the season so far while Chelsea once again scored for fun.

The Premier League table is certainly beginning to take shape now; four points separate the current top four and the rest, and it would not be a surprise should Leicester and Chelsea remain in the Champions League spaces for the rest of the season. At the other end, a bottom three of Watford, Norwich, and Southampton also looks about right.

Liverpool dominated the game at Anfield on Sunday, never looking like failing to get the three points despite being a goal down within the first minute of the game. That was partly because they played with good tempo and urgency, Fabinho in particular ensuring energy levels remained high and the waves of attack were relentless, although Tottenham's shape was a bigger factor in the end.

Mauricio Pochettino went for a flat 4-5-1 formation despite Sheffield United and Man Utd showing recently that a 3-5-2 is the ideal way to stump Liverpool; deploying wing-backs to get tight to the full-backs reduces their impact while leaving three centre-backs to man-mark the Liverpool forwards. In a 4-5-1, Spurs were predictably pinned deep in their own half, hence the hosts' 68% possession.

The main problem was Christian Eriksen and Heung-Min Son failed to sit wide enough, meaning they did not shut down the passing line to Trent Alexander-Arnold or Andrew Robertson. They were spectators defensively, constantly allowing Liverpool to feed their full-backs with one simple pass out wide. This in turn meant Spurs were pushed deeper and deeper as Alexander-Arnold and Robertson swung crosses into the box, leading to relentless pressure on the Spurs goal and a too-wide gap from the Tottenham midfield to an isolated Harry Kane. 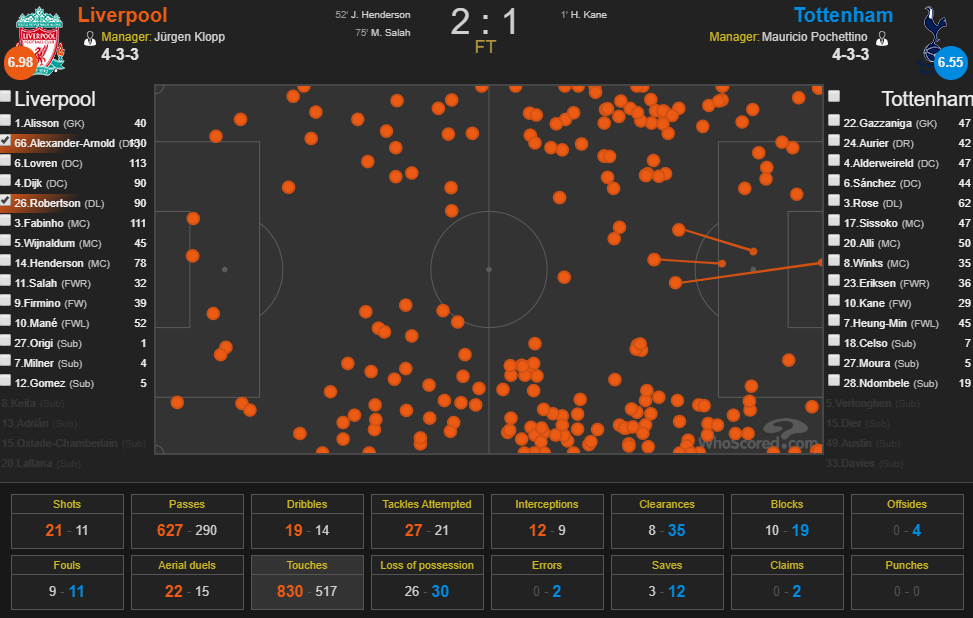 Chelsea's defensive vulnerabilities still threaten to undermine them against stronger opponents in the Premier League, and yet as fellow Big Six clubs falter it looks increasingly likely that Frank Lampard can achieve a top four finish simply by hammering the smaller clubs – as they did at Turf Moor on Saturday thanks, as usual, to the manager's ultra-attacking football.

Mateo Kovacic and Jorginho were outstanding, looking to play a quick vertical pass forward or dribble through the centre whenever possible (five take-ons in total). This put Burnley under immense pressure and prevented the hosts from hunching into a deep defensive shell; Lampard has taught his players to drive forward with line-breaking speed to avoid getting stuck making sideways passes in front of two lines of four. It could not be further from the prosaic football of his predecessor Maurizio Sarri.

What should excite Chelsea fans is that one or two new players seem to click every week at the moment. It was Michy Batshuayi last weekend and now it's Kovacic and Christian Pulisic, the latter's hat-trick exemplifying the importance of narrow wingers in Lampard's system. Pulisic frequently drifted in from the left wing to take up creative number ten positions, including ahead of his first two goals. 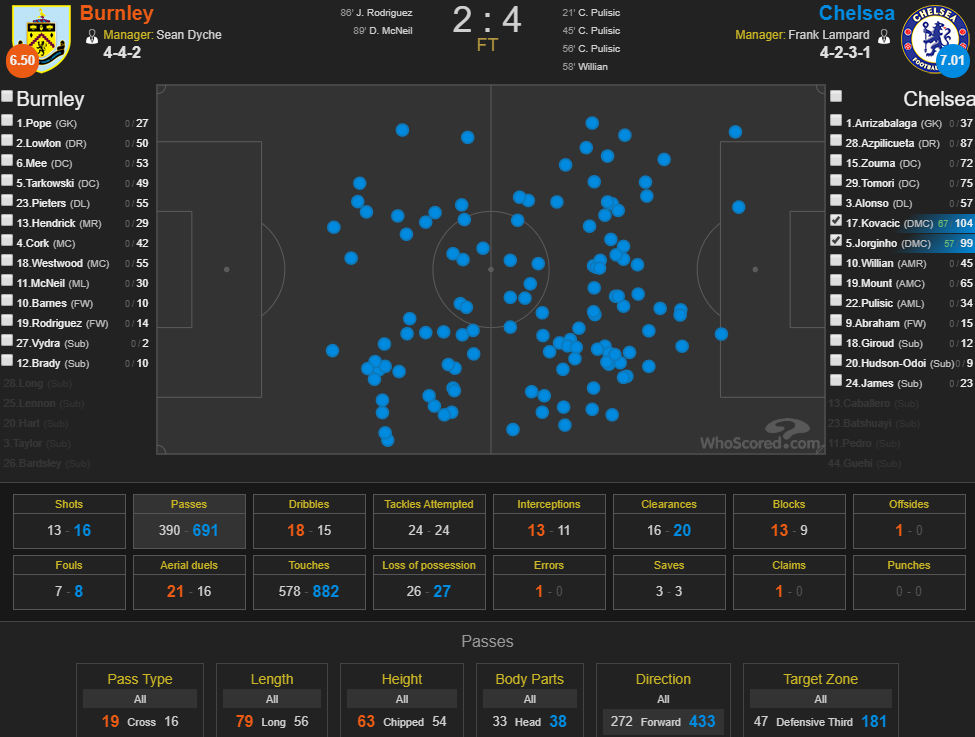 The early kick-off on Sunday might have looked like an innocuous and predictable 1-1, but it was arguably the most interesting tactical battle of the weekend. Newcastle deservedly held a half-time lead after controlling midfield in the first 45, only for Wolves to bounce back after Nuno Espirito Santo made an important tactical switch.

Steve Bruce's 5-4-1 could have been outnumbered in the middle given that Wolves set up in a 3-5-2 (and therefore with one extra central midfielder) but instead the hosts held the advantage thanks to clever positional play from Miguel Almiron and Allan Saint-Maximin.

The wingers tucked right in to act almost as extra midfielders, not only shutting down Joao Moutinho and Ruben Neves but also picking up possession in spaces on the outside of the Wolves midfield. Both wingers frequently drove forward with the ball, the opener coming from a corner after another of Saint-Maximin's mazy dribbles through the half-space column.

At half-time Nuno moved to a 3-4-3 that saw inside forwards Adama Traore and Diogo Jota take up positions in between that four-man Newcastle midfield. Suddenly there was a simple out ball for the Wolves central midfielders, swinging momentum the other way as the visitors began to hit the right flank more often. Traore and Matt Doherty teamed up repeatedly down the wing (Traore had been isolated in the first half), leading directly to Wolves' equaliser.

Southampton made things easy for Leicester first by getting a man sent off and then confusing their own defenders with frequent changes; Jan Valery went from right wing-back to right-back to left-back in the space of ten minutes, making two errors leading to goals in that time.

But Leicester should be praised for their appetite for goal, for their surges into the opposition third and commitment to attacking football all over the pitch. Ben Chilwell and Harvey Barnes shone in particular, making runs in tandem down the left, although it was Ayoze Perez who deserves to be singled out. He consistently stole the ball from a Saints defender, highlighting why his energy and technical ability can be crucial for Brendan Rodgers in the fight for a top four finish.

Worst of the week – Arsenal's collapse against Palace

Only Arsenal could turn a 2-0 lead after nine minutes into such a calamitous day. Granit Xhaka's appalling response to being substituted could yet be the defining moment of the Unai Emery era and the beginning of the end for both club and player, and although ultimately the hosts were unlucky to be on the end of a terrible VAR decision they still threw this one away.

Emery's odd use of a 4-4-2 is to blame; why, when hoping to dominate weaker opponents, did he look to mirror Crystal Palace's system with something so flat and disconnected? Dani Ceballos struggled to perform from a left midfield position, plus Xhaka and Matteo Guendouzi didn't have enough passing options from the middle. Worse still, Emery didn't change formation at any point in the match despite Palace having completed their comeback by the 51st minute. The Arsenal board might not take much more of this.