So today I am writing to you from the other side of the world. I accepted an offer from Al-Merrikh a few weeks ago and my experience so far in Sudan has been excellent.

When I was offered the position, I had a look into the club and saw how big it was. It's in the top 5 in African football, and when COVID is all clear, they'll get 45,000 people for the Champions League games and for the league anything between 20-25,000.

So the support is phenomenal, it's passionate. I realised that when I was walking around the city of Khartoum and being amongst it.

We had an eventful first African Champions League game away in Tanzania due to the COVID issues that happened there, but I'm really enjoying it.

We've been in a training camp for the last 10 or 11 days now until Saturday where we play Al-Ahly in the Champions League. The Egyptian club are massive favourites, having won the competition nine times.

I'm really looking forward to the game. We believe we've got a game plan and group of players who are ready to get a good result. We also compete in the Arab Champions League against clubs from the likes of Jordan, Saudi Arabia, Qatar and United Arab Emirates.

I admit Sudan wasn't somewhere I had thought about before the offer. But I've been positively surprised since I've got here.

The standard of the football is great and I'm really enjoying a new experience in a new country and new culture. I was brought up on the River Tyne and I'm now next to the River Nile!

The food is good, the language barrier has not been a problem as I've got a terrific sport scientist from Egypt who speaks fantastic English and a Sudanese analyst who spent his young student days in London, so he speaks brilliant English as well.

Everything has been great. I don't go out much because the heat is massive, except for when we're on the training pitch, but I've been out a few times for a bit of food. The people are so respectful and polite, they treat you well. There's nothing I can say that isn't good enough.

This move is a big opportunity. It just shows you never know what can happen. There are areas in the world where you can go manage and show people what you're about.

MY TAKE ON BRUCE

I've put forward my thoughts on Newcastle over the last few weeks into two sections.

Steve Bruce is a huge personal friend of mine. He and his wife could not have done more for my family and I when we moved to Birmingham. They looked after us so well and he's obviously a senior manager that's always been there for advice.

Steve is big enough and understands the game to accept that people will criticise him for the results and performances. He would totally get that and take that on the chin.

Now coming from a fan's perspective, and him as the manager, he has to take the responsibility for a shocking run of results, two wins in 18, two wins in 20 across all competitions.

The standard of the performances and quality of football hasn't been acceptable, the way we're sliding down the league isn't acceptable.

Steve, as the head of that, has to take that responsibility and probably most managers would be relieved of their duties with a run like that. He probably knows he is working for a different type of club.

I personally think, and history has shown that this is right, it is pointless getting rid of him now. It's too late.

The new guy, if they want to take Steve out of the firing line now, whoever comes in wouldn't have enough time. 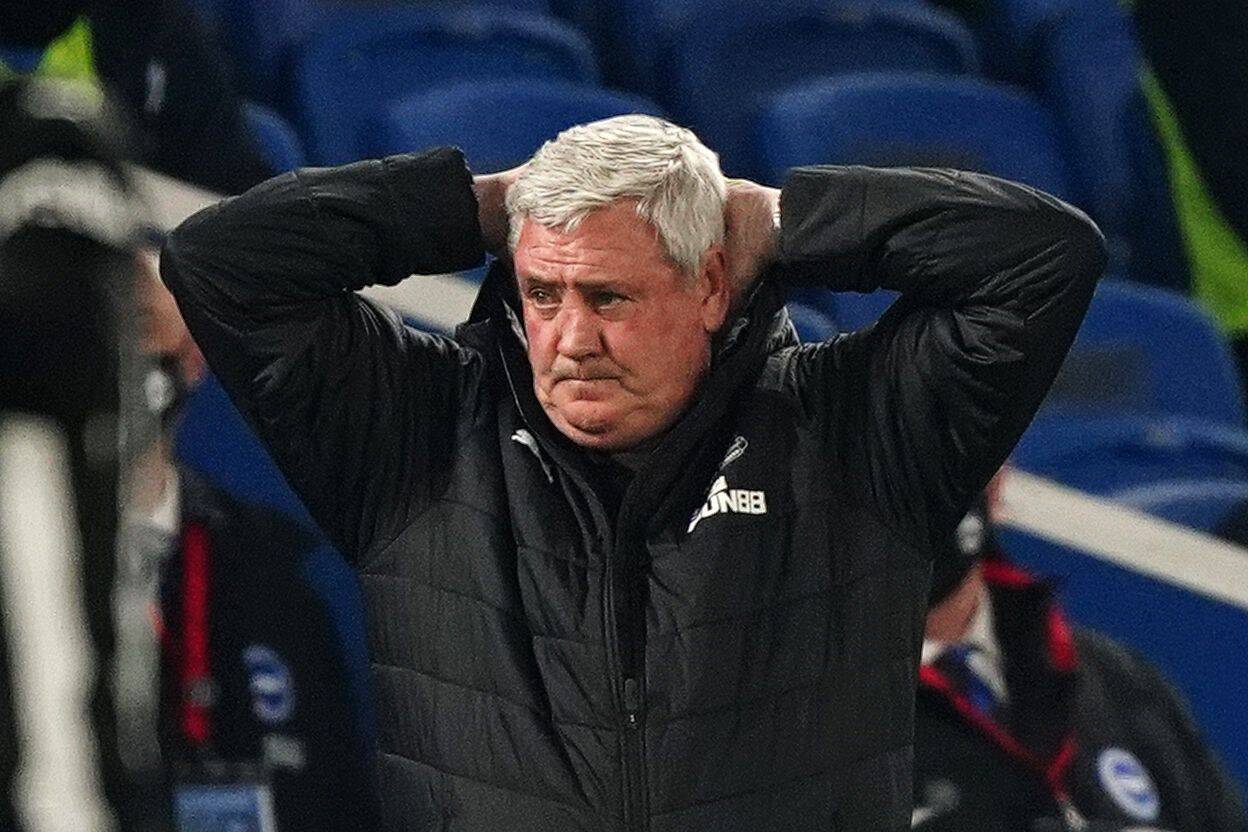 Steve Bruce during the recent loss to Brighton

Let's get it right, Newcastle are two points clear of Fulham with a game in hand. So they've got to make sure when they go to Craven Cottage at the end of the season that they are four points clear because if it's three they've got a worse goal difference than Fulham.

And I see Fulham playing with a lot more spirit, a lot more organisation, a lot more togetherness. So I'd be very concerned if it was the last game of the season and it was only a three point deficit between the two.

I'm a fan of the club and what's gone on isn't acceptable, it's been very poor. The performance levels have been poor, but also let's put this into context as well.

Steve has to take the main responsibility, it always falls on the manager's head, but also the players as well, they've got to stop hiding behind the situation with the manager. Whether they like him or not, they've got to play well.

There are all types of theories out there, the usual 'he's lost the dressing room', 'the players don't want to play for him anymore', 'there's no relationship and it's broke down'.

Well it doesn't really matter what you think of your manager, it's your own personal pride in your performance that matters.

Get out there and do the business for the club that's paying your wages and get the results that are required. Because the fans are sick and tired of having this annual relegation battle year in, year out.

They're still going in unbelievable numbers when they are able too, still pumping huge amounts of money in the football club, buying their season ticket and going to the match, but they're just getting dished up the same stuff all the time, which is what happens when your ambition is only to finish fourth bottom.

For me, Ruben Loftus-Cheek is an outstanding player.

He's got terrific attributes and is technically very gifted with great ability. He can see a pass, go past people, great vision, can deliver the pass short or long. If there is a criticism, you'd like him to score more goals for his ability in those attacking areas.

And if he goes back to Chelsea and it's difficult for him to break through, then yes, I think he has a decision to make.

He has got to decide for his own future, for his career, for his England career. He's already got caps but he can get a lot more if he's playing regularly. Ruben has got to play in the Premier League week in, week out, and be one of the first names on the team-sheet.

His ability is good enough to make sure he does that, he just needs to add the little bits to the end of it because he's certainly got the ability to score double figures in terms of goals. I think that's the missing ingredient at the moment.

I've been really impressed by him and young Ademola Lookman at Fulham. The two lads have played a big part in Fulham's resurgence.

The key for Loftus-Cheek is to add more goals to his game and speak to Chelsea and find out if he has got a position there as a regular. If not then he has to, in my opinion, find a club who can give him that.

I totally agree with Gareth Southgate's comments about Mason Mount.

I thought it was childish that people were saying that he was only getting in the Chelsea team because of his relationship with Frank Lampard.

Managers don't pick players because they like them, they know they need to win games. So they've got to pick who they believe are the best players.

Mason Mount is an outstanding young player. Let's not berate a young player and put issues in front of him that are unnecessary.

It was petty to me that 'oh Mason Mount, he always gets picked because he's a favourite of Frank Lampard'. Nonsense. Mason Mount got picked because his teammates know he is a great player, everyone inside Chelsea Football Club knows that, and now on the international stage he's proven it on a consistent basis.

From the outside I can't comment but he looks to be a lad that doesn't give the manager any trouble whatsoever. He just gets on with his work, he loves his football.

Unfortunately it's taken another manager from overseas to continue to pick him in most games for the penny to drop for everyone.

Fair play to Mason. It just shows you that he has got brilliant character as well as all an immense amount of ability.

WHY SOUTHGATE WON'T REPEAT PAST MISTAKES

It's certainly an exciting time to be an England fan.

There has been some talk recently about the Golden Generation. What went wrong with the Golden Generation, in my opinion, was the coaches tried to accommodate all the top players we had by putting them all in the starting eleven, in any position as long as they were in the eleven.

There were some top players playing in positions that they didn't want to play in and hadn't played there regularly. It was never going to work, unfortunately football is not that simple.

Southgate is doing it the right way. He has four excellent playmakers to pick from in Jack Grealish, Phil Foden, James Maddison and Mason Mount.

However, we now have a manager who is strong enough not to repeat those same mistakes from the Golden Generation days. He's going to pick the players he feels is right for certain games.

Him and his staff have to take a lot of credit about how he is nurturing these young players. It's really exciting.

Jude Bellingham is a player I know from my time as manager of Birmingham City. He was in the academy then, an outstanding player. They knew about his talent even then at the age of 9. My son was in the same group as his brother Jobe and he would come back and talk about Jude, and I used to go watch the academy almost every night. 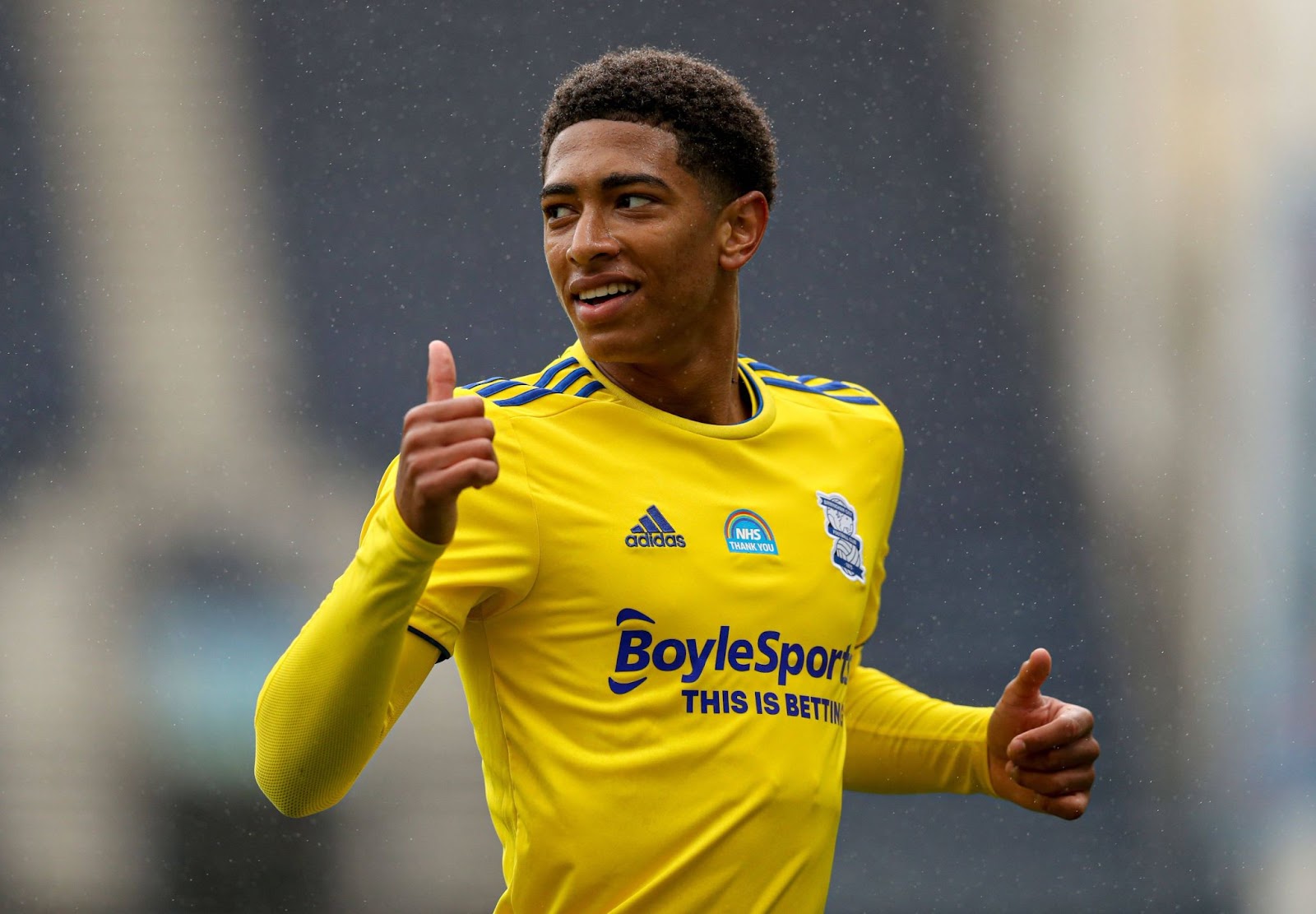 When you're talking about the whole package, here's a lad who is an unbelievable talent that is still a teenager, playing in Europe, playing international football, playing for one of the biggest clubs in Europe in Dortmund.

He has taken it all in his stride. Jude has terrific character, a brilliant lad, unbelievable mentality.

These players are getting nurtured by the current England manager because he's big into the young players, he doesn't seem to be bothered about a birth certificate, he just worries about how good the player is.

And that is both ends of the spectrum as he has also recalled Luke Shaw. He just wants players who are playing well and believe they can do well for their country.

So credit to Gareth and his staff, it's one exciting period. I just hope we aren't building them up because we've had so many false storms when we've gone to major tournaments.