REVEALED: Mourinho Bale complaints made to Spurs No2 Sacramento

An Asprilla or a Rosenthal? Will Solskjaer & Man Utd take a January transfer gamble?

​Solskjaer outlines where Man Utd must improve after Liverpool draw

This weekend a couple of young managers have their first chance to win a major trophy. Mikel Arteta is just 38 years old and has been managing for less than a year, but he leads Arsenal into Saturday's FA Cup final against Chelsea, who are managed by Frank Lampard, a 42-year-old enjoying just his second season of management.

Both Arteta and Lampard have had difficult debut seasons in charge of Premier League clubs. The former has had to deal with a team low in confidence, as well as a series of injuries, while the latter has had to work in the midst of a transfer ban. But both have earned respect for their tactical decision-making, which will be put to the test once again on Saturday.

The way the two sides set up for their FA Cup semi-finals was eerily similar. On their way to a shock 2-0 win over Manchester City, Arsenal lined up in their usual 3-4-3, with Alexandre Lacazette supported up front by Pierre-Emerick Aubameyang and Nicolas Pepe. The next day, Chelsea defeated Manchester United 3-1 using the exact same system, a 3-4-3 with Olivier Giroud flanked by Willian and Mason Mount. But while both teams defended in the same basic shape, the way they pressed their opponents was different.

Arsenal had Lacazette drop in and mark one of Manchester City's midfielders, taking away the 3-versus-2 City would otherwise have had in midfield, while wide forwards Aubameyang and Pepe pressed City's centre-backs from out to in, funnelling any short passing through the centre and into Arsenal's man-marking.

Chelsea pressed differently. Giroud and the nearest wide forward – Willian on the right, for example – would press while the far-side forward shifted over to help cover Manchester United's midfield two. Below we see an example of this – near wing-back Reece James presses the ball, while Mateo Kovacic steps up to cover Nemanja Matic and Mount shifts across to cover Fred. Neither of Manchester United's midfielders have time or space to play with. 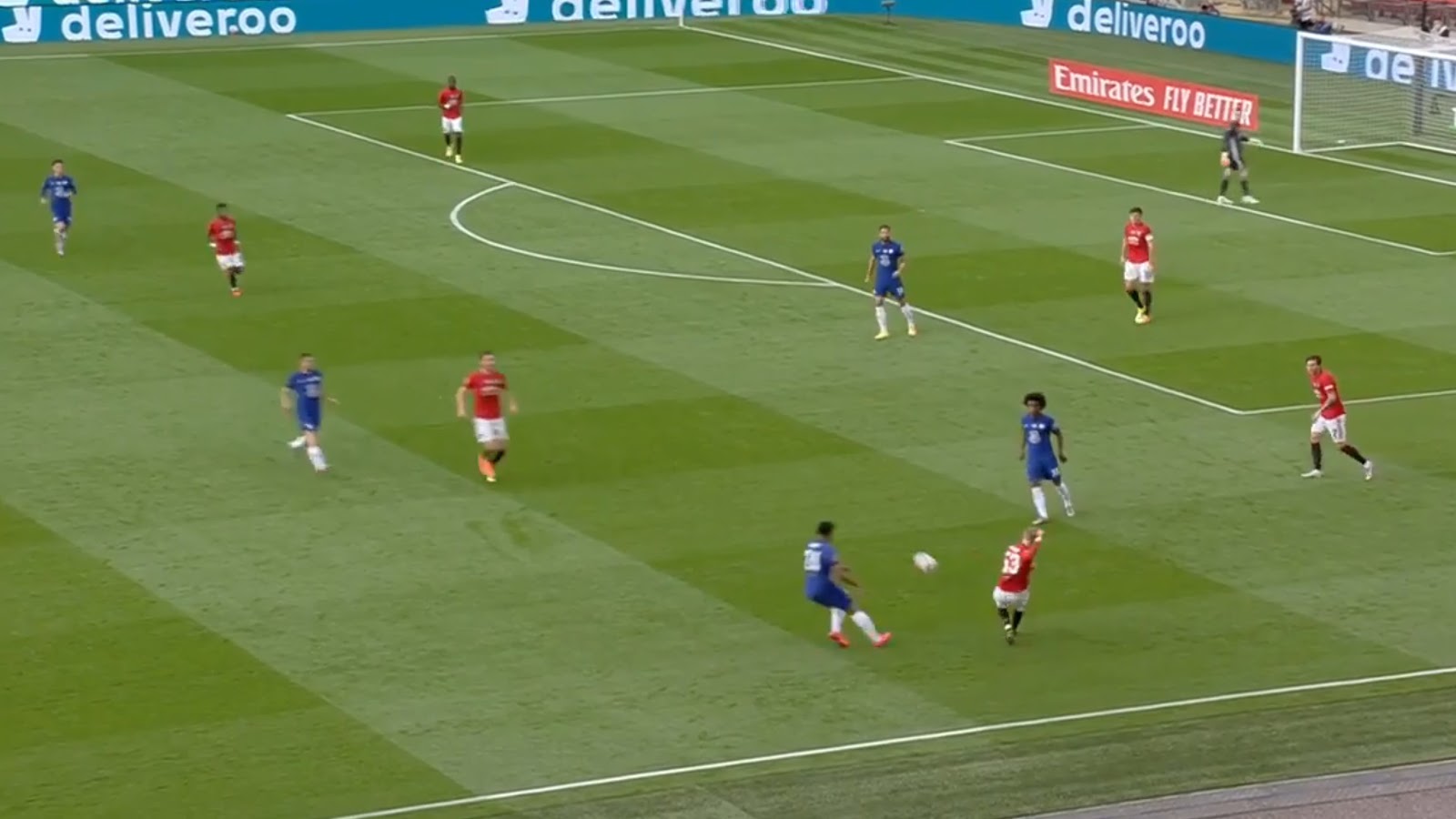 These pressing strategies worked well. Chelsea's intensity and success in 1-versus-1 defensive duels led to multiple turnovers and counter-attacking opportunities, while Arsenal's approach forced City to go long from goalkeeper Ederson, reducing their control in build-up.

However, it must be underlined that the strategies were for specific opponents. Chelsea came up against a Manchester United side also fielding a back three, while Arsenal were up against Manchester City's 4-3-3. Arsenal may not have Lacazette drop back this weekend, because Chelsea – like them – will probably field only two midfielders, not three.

So, assuming both teams continue with the 3-4-3 systems that have worked so well for them, this weekend's match may resemble a series of 1-versus-1 duels all over the pitch.

WHO WILL WIN 'THE BATTLE'?

In matches where both teams adopt the same shape and have similar defensive approaches, the contest can often be decided by who wins 'the battle'. Basically, who has the better individual players? 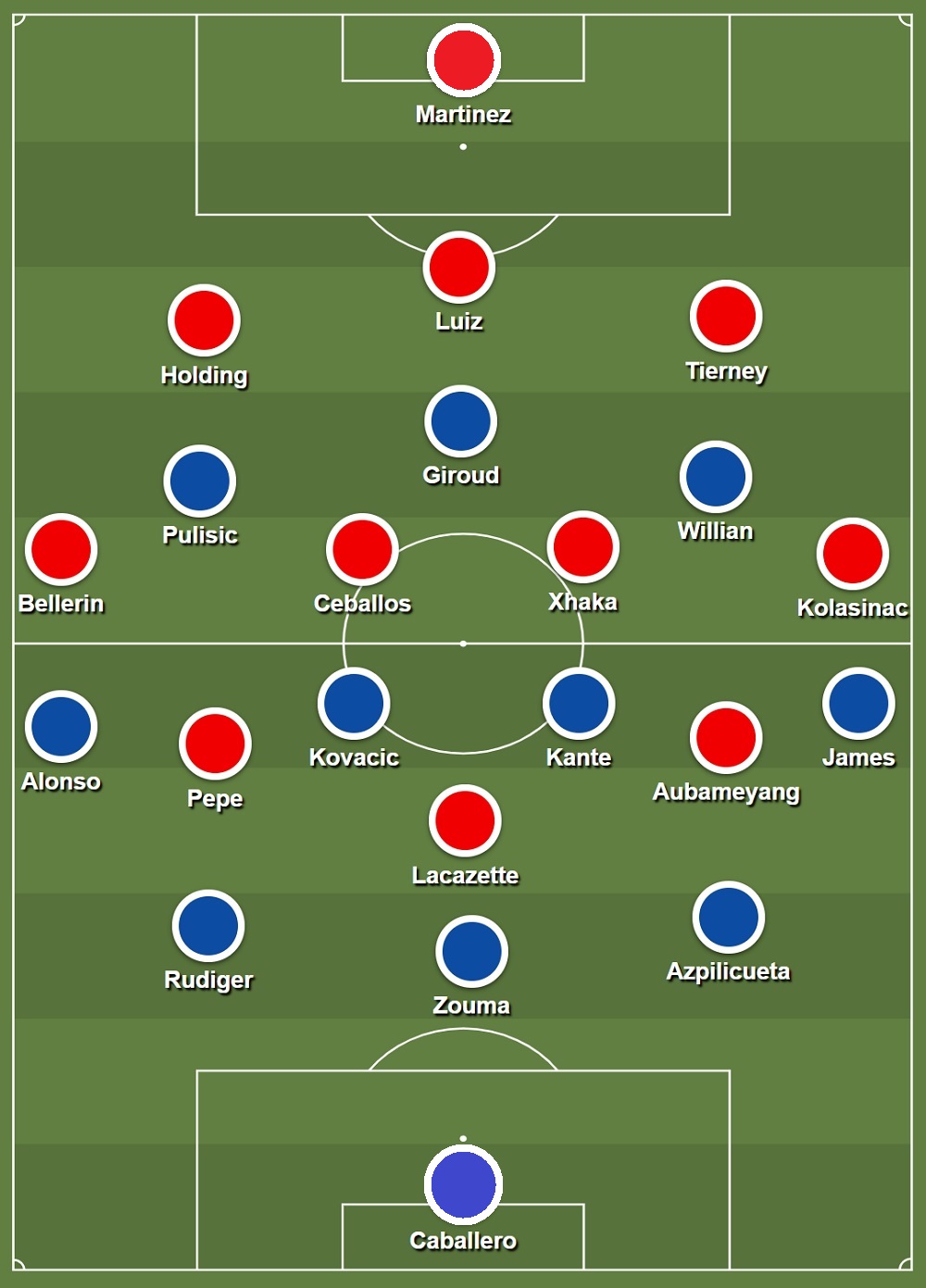 Looking at the back threes versus front threes here, Chelsea may have a slight edge. Arsenal's back three will be missing Shkodran Mustafi and so will probably include Rob Holding, David Luiz and Kieran Tierney. No member of this trident is considered a brilliant defender, and Tierney isn't even a natural in the position. Add to that the fact they are up against a proper aerial target in Olivier Giroud who can compete on long balls, and they may have a hard time establishing dominance.

At the other end, Arsenal have a potent front three in Aubameyang, Lacazette and Pepe, but Chelsea's back three looks much stronger than their rivals'. Kurt Zouma is strong in duels, while Antonio Rudiger is one of the quickest centre-backs in the country. Cesar Azpilicueta is perhaps the weak link, but even he is a decisive and reasonably mobile outside back.

On paper, Chelsea's back three looks much better placed to handle Arsenal's front three. Then, in midfield, Chelsea also appear to have the more capable players. N'Golo Kante is one of the best ball-winners in the world, while Kovacic is quite physically strong. Defensively they look better than Arsenal's pairing of Granit Xhaka and Dani Ceballos. They are also better offensively – Kante with his dynamism and ability to find pockets; Kovacic with his ability to turn opponents 1-versus-1.

With a defensively stronger back three, a midfield pairing that should win out both in defensive and attacking duels, as well as a better target for direct play in Giroud, Chelsea look the most likely of the two teams to win 'the battle' and establish dominance of territory and possession. They could enjoy a lot of the ball, and spend more time in their opponents half.

In their win over Liverpool in Premier League action, Arsenal showed that they can handle these situations. Liverpool had 67% possession and 24 shots to Arsenal's three, but still couldn't bag more than one goal. That had a lot to do with Arsenal's extra numbers (through their use of a back three) combined with basic penalty box defending. They just always had a defender nearby to throw himself in front of shots, make blocks, and head away crosses. And even if Liverpool got a shot away, stand-in goalkeeper Emiliano Martinez showed safe hands to deny them.

However, this Saturday Arsenal come up against a team with a serious weapon to hit with crosses in Giroud. Few, if any, Premier League strikers are better on attacking crosses than the Frenchman. His movement to hit the box at the right time and in the right place is uncanny, while his capacity for wrestling defenders to manoeuvre space for himself is superb. Add that to quality crossing from the likes of Marcos Alonso and Azpilicueta, and Arsenal may have more trouble dealing with balls into their box this time around.

On the other hand, they carry a genuine potency on the counter-attack. With players like Pepe and Aubameyang, who possess devastating skill and speed, not to mention excellent movement off the shoulder of the last man, the Gunners will always have that threat in behind. Combine this with Lacazette's capability to come short, control under pressure and link play, and Chelsea's back line will have a tough task controlling Arsenal's forwards in transitions. 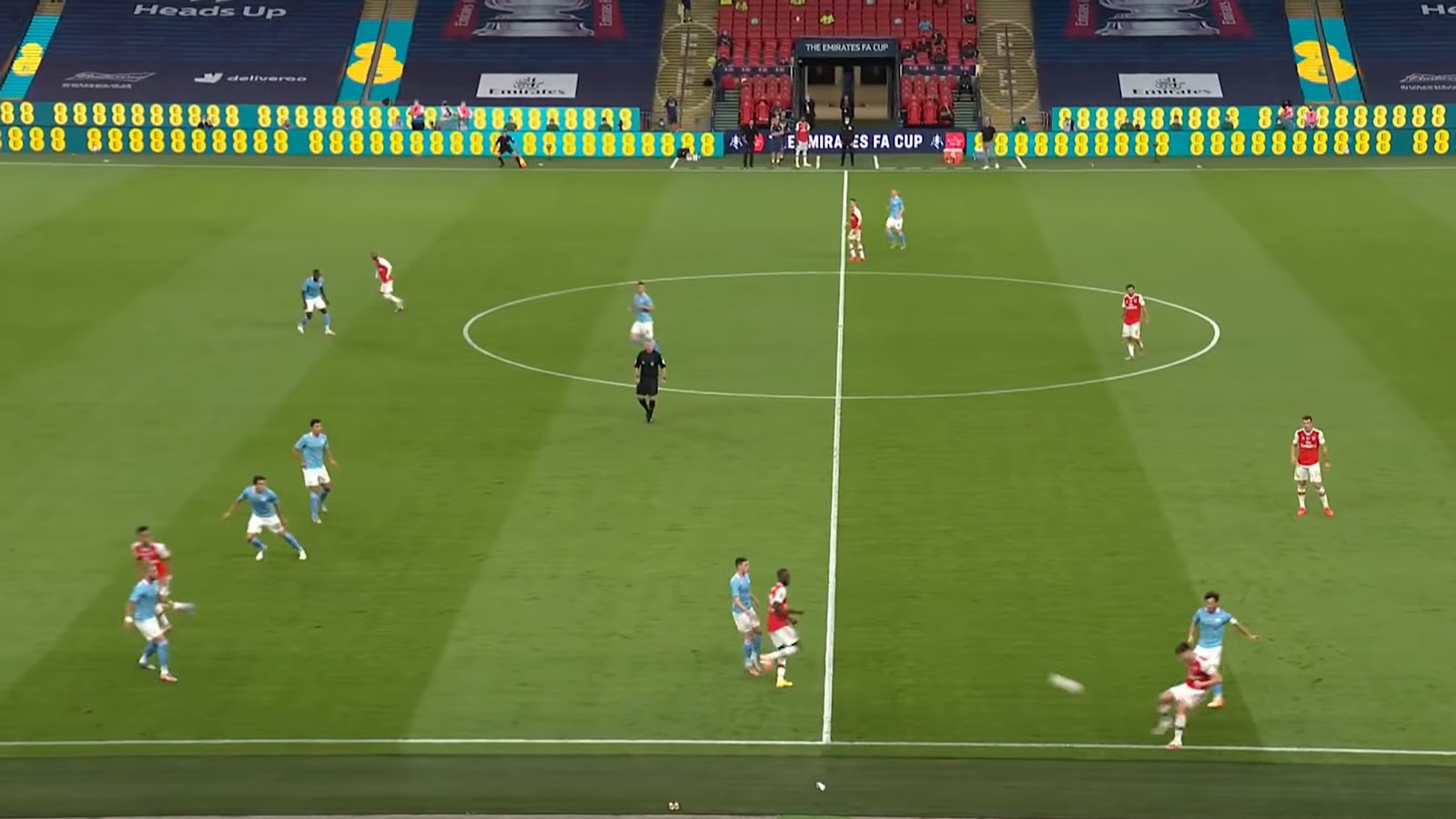 Above is a picture showing how Arsenal penetrated Manchester City's back line on the counter in their semi-final win. They break away through Pepe, and here Tierney finds Aubameyang's run in behind to score the crucial second goal.

WHICH MANAGER WILL WIN THEIR FIRST TROPHY?

Chelsea may well dominate territory and possession, but that is no guarantee of victory. As we have covered here at Tribal Football in recent weeks, they often struggle in these types of game to break the opponent down and turn their dominance into a win. And, as discussed, Arsenal are a very credible counter-attacking threat.

However, considering the similarity of these teams in terms of tactical approach and combining that with Chelsea's on-paper individual superiority, they are the best bet to win this weekend's FA Cup final. In the process, Lampard would win the clash of young managers, secure his first major trophy, and add legitimacy to his position within the club ahead of his second season in charge.