Watch: Van Dijk back at Liverpool as knee injury recovery steps up

Man Utd ace Rashford: Mourinho urged me to be 'savvy' when challenged inside penalty area

Man Utd striker Rashford: Only Prem title will stop us being FAILURES

As footballing transitions go, few clubs are undergoing a shift more dramatic than that which Chelsea are experiencing now. In the last year, they have had a transfer ban that forced them to call upon their youth academy graduates, and replaced experienced manager Maurizio Sarri with club legend Frank Lampard. They have also lost Eden Hazard, one of the greatest players in their recent history.

Other influential attackers – Pedro and Willian – will depart in the coming months. Arriving in their place will be Timo Werner and Hakim Ziyech, two of the most exciting players in Europe. Werner, who hit 28 goals in the Bundesliga last season, will join from RB Leipzig for a fee of around £50 million. Ziyech, a key member in Ajax's run to the Champions League semi-finals in 2019, will sign for just over £30 million.

The signatures of Werner and Ziyech will transform Chelsea's attack. The big questions are: how will that attack look, and will it help Lampard's men challenge Liverpool and Manchester City's Premier League dominance?

STRUGGLES IN A POST-HAZARD WORLD

Since Hazard left, Chelsea have changed in a number of ways – some good, some bad. Lampard's management has been much different to Sarri's, in that he is far more flexible than the Italian both with formation and game-by-game strategy. Under Sarri, Chelsea rarely – if ever – veered away from a heavily possession-oriented 4-3-3 system, but Lampard has also made use of the 4-2-3-1 and has occasionally introduced a back three, with more allowance for direct and counter-attacking play.

These changes have made Chelsea less predictable, which is good on paper. But in practice, there have been teething issues. Perhaps the biggest problem has been their inability to break down determined low defensive blocks, an issue only exacerbated by Hazard's departure.

The Belgian is an outstanding dribbler, and he would often open up a game for the Blues single-handedly. His capacity for driving inside from the left, eliminating several defenders along the way, was breath-taking and gave the team a way out against stubborn defences. Without his individual spark, they have frequently struggled to make their possession count.

A quick breakdown of the possession stats backs this up. Chelsea have had 50% of possession or less just four times this season, and haven't lost in any of those games, averaging two points per game. It's a very small sample size, because they do tend to enjoy the majority of the ball, but the more dominant they are in this respect, the less effective they become.

In 13 league matches where Chelsea have had a slight majority share of possession (between 51 and 60%), they have won seven and lost four, averaging 1.8 points per game. But in games where they dominate possession (61% plus) they have won seven and lost six, averaging just 1.5 points per game. It's a pretty significant drop-off, which underlines the struggle they have had in games where the opponent concede the ball completely and challenge Chelsea to break them down.

In Hazard's last season at Chelsea, he averaged 2.6 key passes per game and assisted 15 goals. This season, the team's most creative player has been the soon-to-depart Willian, who has averaged two key passes per game. The Brazilian is a brilliant player, especially in transitions, but he hasn't been able to fill the creative shortfall left by Hazard's absence. This is underlined by the fact he is tied at the top of Chelsea's 'assists column' with defensive right-back Cesar Azpilicueta, both on five.

Ziyech should be able to help in this sense. During the last four years with Ajax, he has never dropped below 3.7 key passes per game on average, and he has hit double figures for assists in every season for the Dutch champions. There is also a basic tactical similarity to Hazard, in that he is a winger that prefers to drift inside and get into more central positions where he can shoot, combine, or set up a teammate. 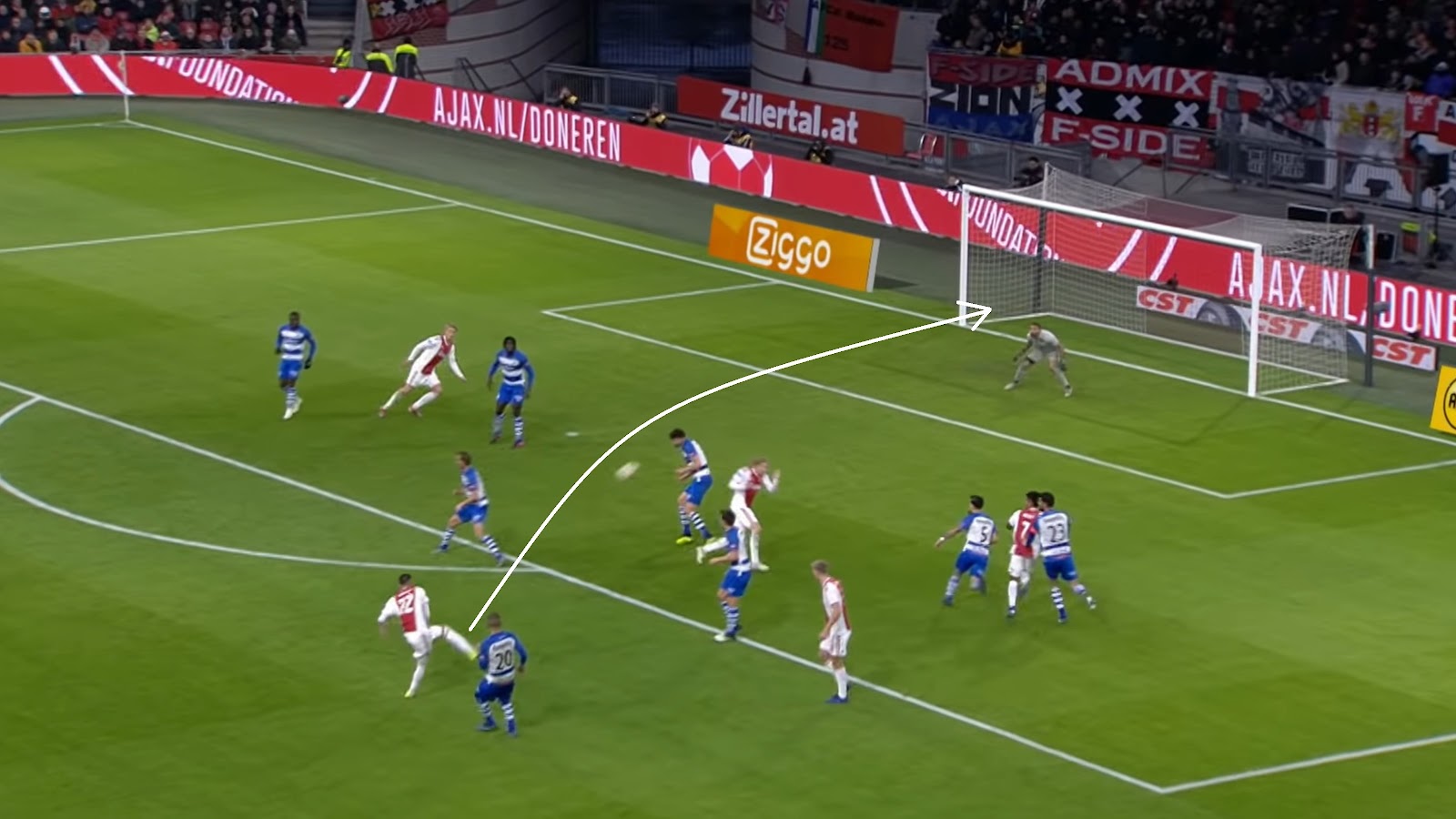 Those numbers were accrued in the Eredivisie, which isn't always the best testing ground for future Premier League talent. Just ask Tottenham fans about Vincent Janssen. Also, some of those key passes and assists relate to set pieces, not open play. But the fact remains that Ziyech possesses the sort of qualities Chelsea's final third play has lacked of late – he is an accurate passer with an eye for the final ball, with the trickery and imagination required to play through or over deep defensive lines.

Ziyech's tendency to drift inside from the right, onto his favoured left foot, could also mean that Lampard re-thinks his choice of right-back. In order for the 27-year-old to play his preferred role, Chelsea need a right-back that can overlap and provide width. Azpilicueta is a good crosser who times his forward runs well, but he may be left out more often in favour of Reece James, who is a more rounded offensive full-back and averages 1.2 dribbles per game more than the Spaniard.

HOW WILL WERNER IMPACT THE FRONTLINE?

If Ziyech has been brought in to set up goals, Werner has been signed to score them. He has hit double figures in the Bundesliga in each of the last four seasons, helping cement RB Leipzig's status as one of Germany's top clubs.

Chelsea's primary goal threat this season has been Tammy Abraham, who has hit the net 13 times in league action. But he is a very different type of striker to the incoming Werner, and it's possible the two may not be direct rivals for a place in Lampard's starting line-up.

Abraham's height offers Chelsea a direct route in build-up, allowing them to get up the pitch quicker when they are struggling to play through midfield. He also offers an aerial threat in the box on crosses, which prove particularly useful against low blocks. On top of that, the youngster has a decent knack for being in the right place at the right time.

Werner, on the other hand, is not a threat in the air. He also rarely plays as a lone striker – usually Leipzig deployed him on the left side of a front two or three. His main quality is electric pace, which makes him a threat both in transition and in behind higher defensive lines. Additionally, his movement is intelligent and his dribbling is good, which gives opponents problems when he comes inside from wider starting positions, with or without the ball.

In matches where the plan is to counter-attack, Lampard may play Werner as a lone striker. But in the majority of games, where Chelsea dominate or control possession, he won't want Werner playing central with his back to goal. Rather, he'll want him pulling deep or wide, getting on the ball and dribbling at defenders, or making out-to-in runs behind to get on the end of Ziyech's killer passes. 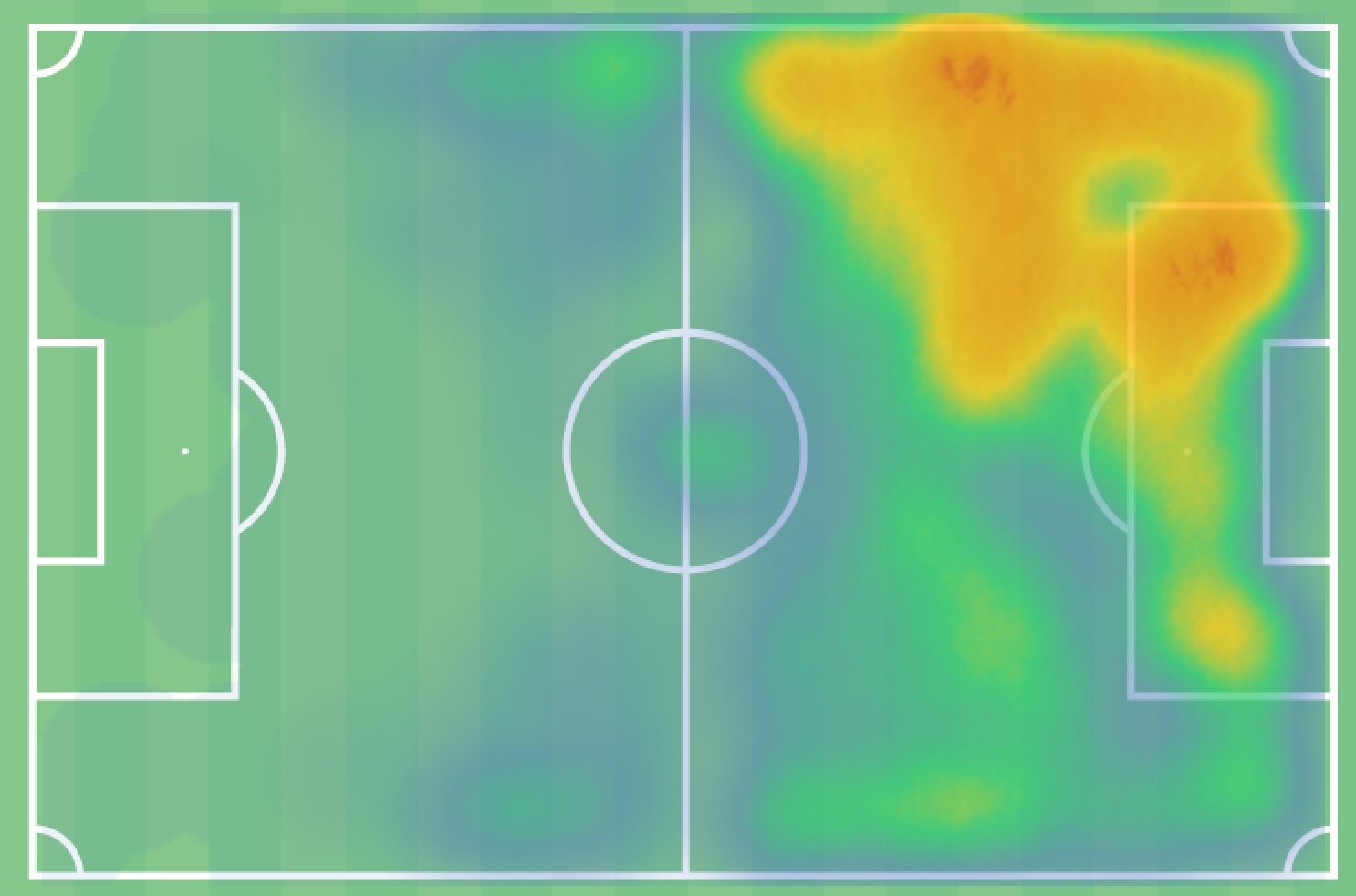 The heat map above, courtesy of Wyscout, highlights Werner's preferred areas on the pitch. It looks ominous for Christian Pulisic, who has impressed in spurts on the left side of Chelsea's attack. The chances are that it is his position, not Abraham's, that is most threatened by Werner's presence.

This season, Werner scored more goals per game, had a direct hand in more goals per game, averaged more shots, converted more of his shots into goals, and played more key passes per game than Pulisic. And he did all of that while playing in similar zones to those the American tends to occupy.

In Lampard's preferred 4-3-3 system, in the majority of matches where Chelsea have more possession than their opponent, it is fair to expect Werner and Ziyech will slot in on either side of the front three, with Abraham between them. This would allow for the least amount of disruption elsewhere in the team, with Mateo Kovacic, N'Golo Kante and Jorginho all keeping their preferred roles in midfield. 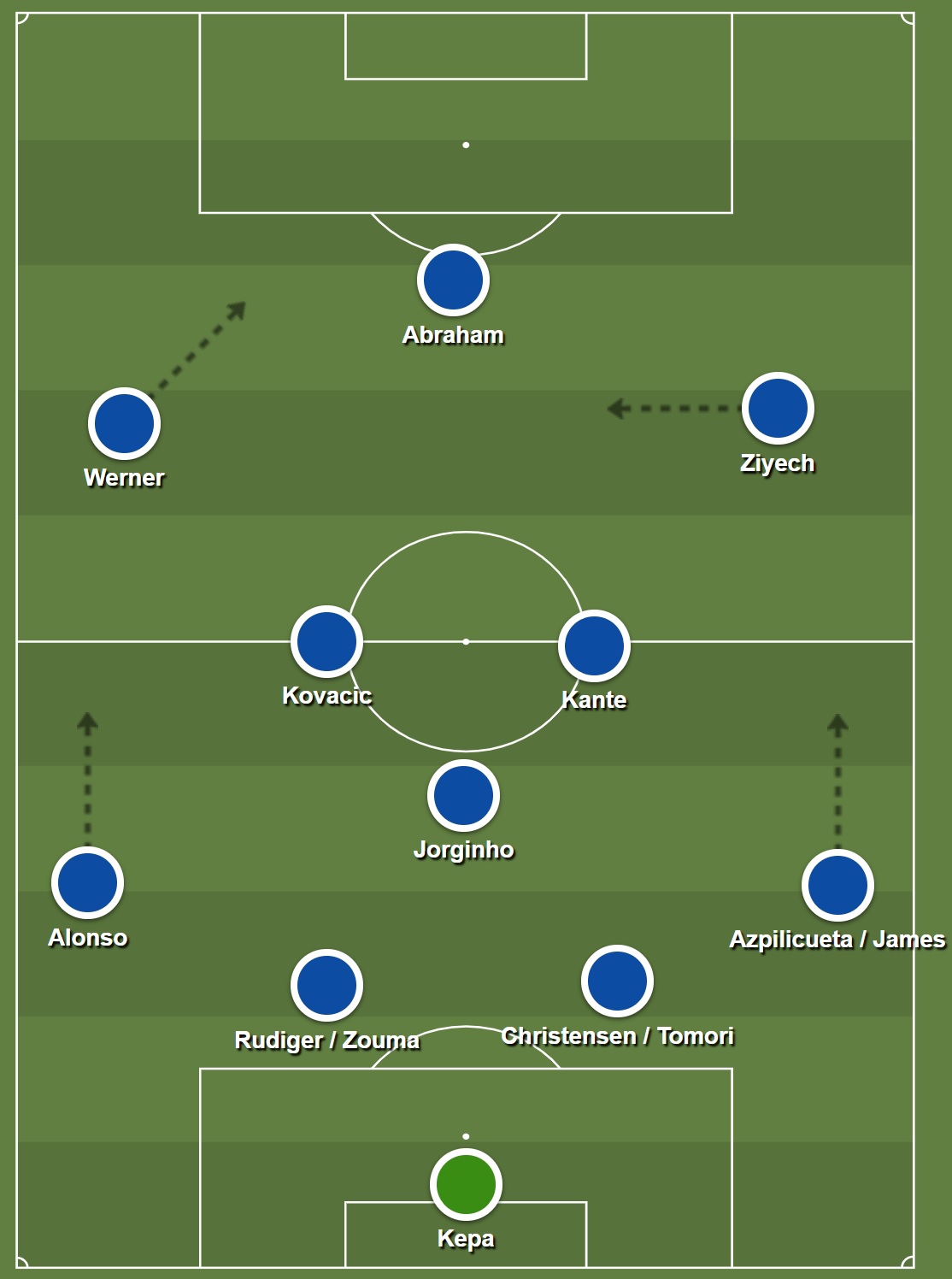 There may be occasions, however, where there is a need for more threats in and around the box to break down opponents. In those circumstances, where Chelsea have around 70% of possession, it is possible that Lampard may revert to his 4-2-3-1, dropping Kovacic, and bringing Pulisic into attacking midfield on the left or right, meaning Werner plays closer to Abraham, or Ziyech comes in and acts as a more traditional No.10.

Then, against top-six rivals, there may be another change, with Abraham dropping to the bench and Werner leading the line with Pulisic and Ziyech flanking him. That would give an injection of mobility that could seriously threaten in attacking transition in games where Lampard's side have the minority share of possession.

The arrivals of Ziyech and Werner massively boost the quality and options in Chelsea's frontline, making them a more productive attacking force. They should score more against low block opponents, which will in turn improve their points tally. However, as long as Kepa Arrizabalaga is making goalkeeping errors, and uncertainty persists around who plays in defensive midfield and what their best centre-back partnership is, Chelsea will not be defensively strong enough to keep up with Liverpool and Manchester City.

All data courtesy of WhoScored.com, unless otherwise stated.