The new Atletico Madrid: Why there is cause for optimism in Simeone transition

Atletico Madrid are one of the most easily identifiable clubs in Europe.

Beyond their red and white stripes, they have a tactical approach that has been ingrained over the last eight years. With Diego Simeone at the helm, they have devoted themselves to 4-4-2, exceptional defence, and purposeful counter-attacking. However, while the manager and his approach remains in place, they are now in transition.

This summer, they said goodbye to an entire back line, with stalwarts Juanfran, Filipe Luis and Diego Godin moving on. Lucas Hernandez also departed, joining German giants Bayern Munich. On top of that upheaval, two of their key players left – deep-lying midfielder Rodri signed for Manchester City and attacker Antoine Griezmann signed, rather contentiously, for Barcelona.

Several new players have arrived to help fill the voids, but it's unclear what Atletico will look like going forward.

Here, we at Tribal Football break down what their line-up may be in the 2019/20 season.

Simeone is committed to a back four, and that is highly unlikely to change in the wake of Godin, Juanfran and Filipe's departures. Solid centre-backs Jose Gimenez and Stefan Savic remain, as does right-back Santiago Arias, so there are some familiar faces to ease new additions in during the transition period.

Jan Oblak will remain in goals, which is key. The Slovenian is one of the best shot-stoppers around today, and his imperious presence is outstanding backup behind the back four. In front of him, several positions appear up for grabs.

Savic and Gimenez may well take up the centre-back berths. Both are good in the air and understand what Simeone is looking for at the heart of defence. However, the recently signed Felipe (from Porto) and Mario Hermoso (Espanyol) could be utilised.

The latter brings a different profile to the defence with his quality on the ball. When it comes to progressing possession from the back, he averages more dribbles per game than Savic, more key passes per game than Gimenez, and more through balls per game than both.

These numbers are not inflated by a team tactical difference. Hermoso played for Espanyol last term, who averaged 0.3% more possession than Atletico and played 35 fewer short passes per game. Added to his greater ability to play accurate forward passes or switches, the 24-year-old is left-footed, which Atletico otherwise lack in their centre-back options.

At full-back, Simeone has less of a headache in selecting his starting pair. Renan Lodi is the only available left-back at present, so is almost certain to start as it stands, while on the right-hand side Kieran Trippier should start ahead of Santiago Arias.

Trippier's signing raised eyebrows, but he is an experienced campaigner who has played at the highest level for club (Tottenham Hotspur) and country (England). He's also a positive attacking force, averaging two crosses and 1.8 key passes and offering the energy to get up and down the flank. For context, Juanfran and Arias combined didn't accomplish those numbers last season.

Atletico's midfield four is difficult to predict game to game. This is primarily because there are an array of different options for each position, but is also related to the versatility in the players available. Koke and Saul are capable of playing both centrally and out wide in Simeone's middle four, while Thomas Lemar and Vitolo can take on either wide role. Meanwhile, Thomas Partey provides more individual ball progression to the team, averaging 1.1 dribbles per game.

None of these players are natural fits for the hole left by Rodri's departure, though new signing Marcos Llorente is. The playmaker thrived on loan from Real Madrid at Alaves two years ago, but was unable to dislodge Casemiro from the base of midfield at the Santiago Bernabeu. Fortunately for Atletico, his numbers from that loan spell are intriguing.

During his 2016/17 campaign with Alaves, Llorente averaged 54.7 passes and found a teammate 87% of the time. Last term with Atletico, Rodri averaged 56.7 passes and completed 91.1% of his pass attempts. Those numbers slightly favour the new Man City pivot, but not by much. But Llorente's Alaves numbers were higher than Rodri's Atletico stats when it came to key passes (0.6 to 0.5), and dribbles (0.8 to 0.6). To summarise, Real Madrid's loss could be Atletico's gain, as Simeone's Rodri-shaped hole could be immediately filled by Llorente.

Hector Herrera has also arrived from Porto on a free transfer, and the Mexican will add energy and non-stop box-to-box running in the centre of midfield. He is likely to compete with Partey for a spot in the line-up, though it isn't a guarantee that either will start.

And now to the attack. Griezmann's presence will be missed, but the long term future of Atletico's front two looks exciting thanks to the arrival of Joao Felix. The 19-year-old Portuguese is regarded as one of the finest young talents in football, and became the fourth-most expensive transfer of all time when his £113 million move from Benfica was completed.

Felix has taken Griezmann's number seven shirt and will be expected to perform a similar function in the side – providing link-up play, drifting between the front line and the midfield four, and bringing quality in the final third. Last season, in 26 league outings, he scored 15 goals and set up seven for his teammates. He also averaged 2.6 shots per game, 1.1 key passes and 0.7 dribbles.

Those stats are impressive for a teenager, though the step up from Portuguese to Spanish top-level football should not be underestimated. Felix has a lot of pressure on his shoulders, and one good season in a sub-elite European league isn't quite enough to state he is categorically ready to handle that pressure. Nonetheless, his talent is clear and he should at least help to ease the goalscoring blow of losing Griezmann whilst continuing his development.

Felix will likely play behind Alvaro Morata, who found the net a respectable six times in 15 league outings after joining on loan from Chelsea midway through last term. The 26-year-old is the type of striker Simeone loves – he's hard-working, runs the channels, is direct on the ball, and injects pace on the counter-attack. Atletico is exactly where Morata, who has never been a truly prolific finisher, needs to be to fulfil his potential.

HOW THEY COULD LINE UP

Simeone may want to partner Gimenez with left-footer Hermoso in central defence, to aid in build-up situations. Oblak, Trippier and Lodi all look probable or certain to start at goalkeeper, right-back and left-back respectively.

In midfield, Saul could take on the right wing berth with Koke on the left. Llorente will replace Rodri in the number six role, while Partey may just edge Herrera to start alongside him. For games in which Atletico will see more of the ball, a more attacking midfield formation may be used. Saul could come infield, taking Partey's spot alongside Llorente, and allowing Lemar to come in on the right-hand side.

Up front, Felix will play just off of Morata. This means Diego Costa's aggression will be limited to cameos from the substitutes' bench, which may be beneficial for both player and team. 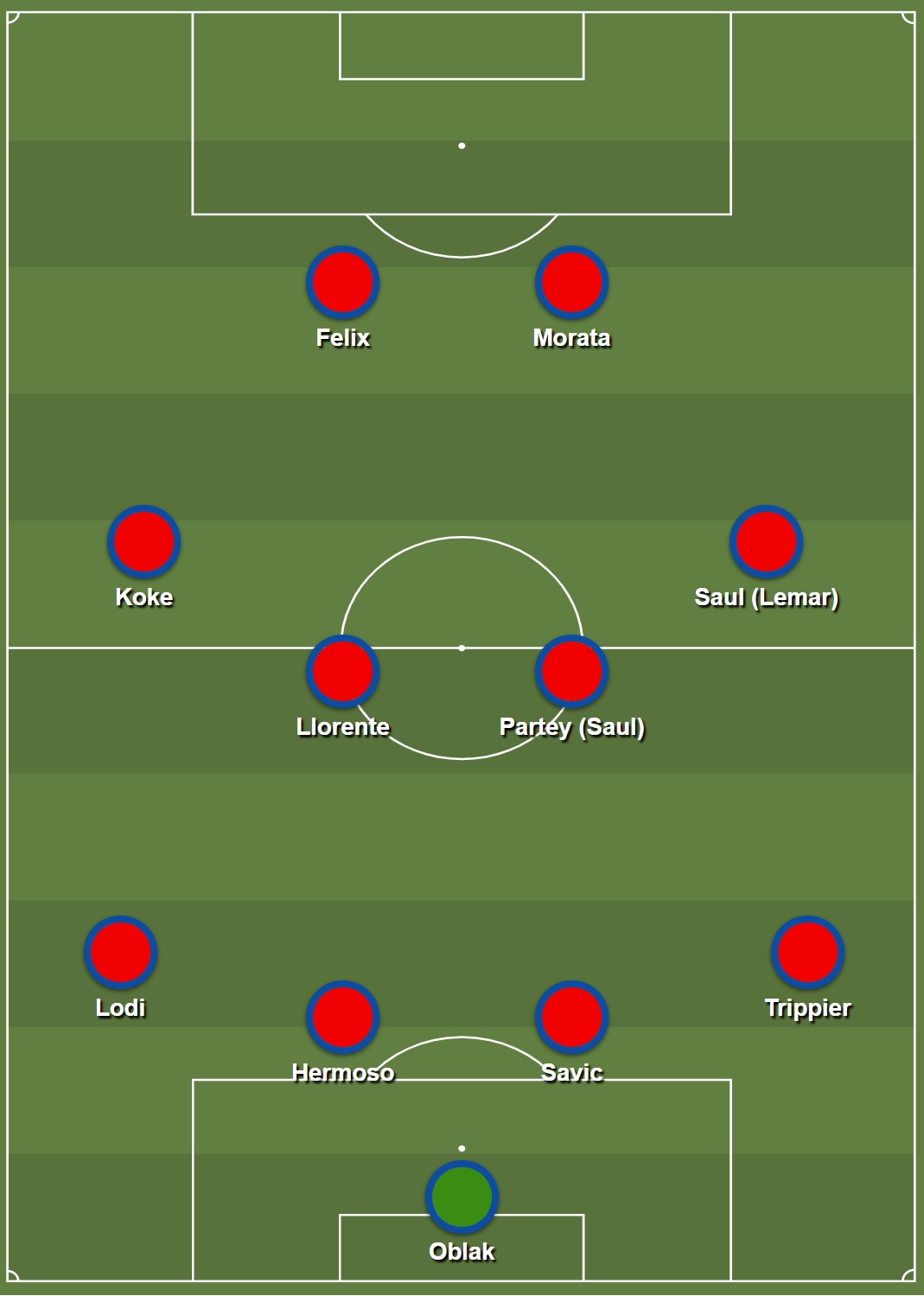