COMMENT: It was lost in the aftermath of Wednesday night's dramatics, but a major shift in the relationship between Paul Pogba and his manager was seen in midweek...

Ole Gunnar Solskjaer dropped his No6. For a Champions League tie at home. After just the one victory in their past five games, Pogba was dropped to the bench by his Manchester United manager for the clash with Atalanta. There was no easing him back from injury. No rotating the Frenchman to keep him fresh. This was stark. Blatant. Pogba had been dumped.

Solskjaer couldn't find room for him. Again, this wasn't about circumstances. Solskjaer wasn't setting up his team to nick a score draw away from home. This was Atalanta at Old Trafford. In front of a full house. The routine XI would include Pogba's name in midfield. But not this night.

Solskjaer had warned after defeat at Leicester City that "something will have to give". And that "something" was Pogba's status as an untouchable. The World Cup winner is no longer a Manchester United first-choice. And the ramifications should be felt right up to the United board room.

Even at halftime, with his team two goals down, Solskjaer didn't turn to Pogba for help. Instead, it was a rejig of his midfield structure, the manager accepting a suggestion from Bruno Fernandes to drop him deeper. To get the Portuguese on the ball. As Pogba watched on, Fernandes and Solskjaer thrashed out their positional change. More possession. More responsibility. Two goals in arrears and with the press sharpening their knives, Solskjaer leaned on Fernandes to shake up the midfield. To shift the momentum of the game. Everything Pogba had been brought back to the club five years ago to do, Solskjaer felt more secure in entrusting Fernandes to carry out.

And of course, the manager wasn't let down. Fernandes creating the opening for Marcus Rashford to pull the first goal back ahead of United eventually winning the tie 3-2. Another magical European night for the Old Trafford support. Another night of legend for the game's matchwinner, Cristiano Ronaldo. But also a chastening one for Pogba - and particularly his support team.

£350,000-a-week. £400,000-a-week. £450,000-a-week. These are the numbers being bandied about for what United must come up with to convince Pogba to stay. Mino Raiola, his long time agent, has been in touch. He'd rather move him out of Old Trafford and place him back on the continent. Raiola can spy another massive broker's fee. But the word from Old Trafford is the board wants Pogba to stay. And they'd be willing to make him the club's highest paid to do so.

But after Wednesday, can those in charge of the purse strings justify such a stand? Particularly while they're locked in negotiations with Fernandes about a new deal? For the moment, Pogba is demanding over FOUR TIMES what Fernandes is currently earning to re-sign. And the terms Miguel Pinho, the Portuguese's agent, is asking fall well short of Raiola's demands. 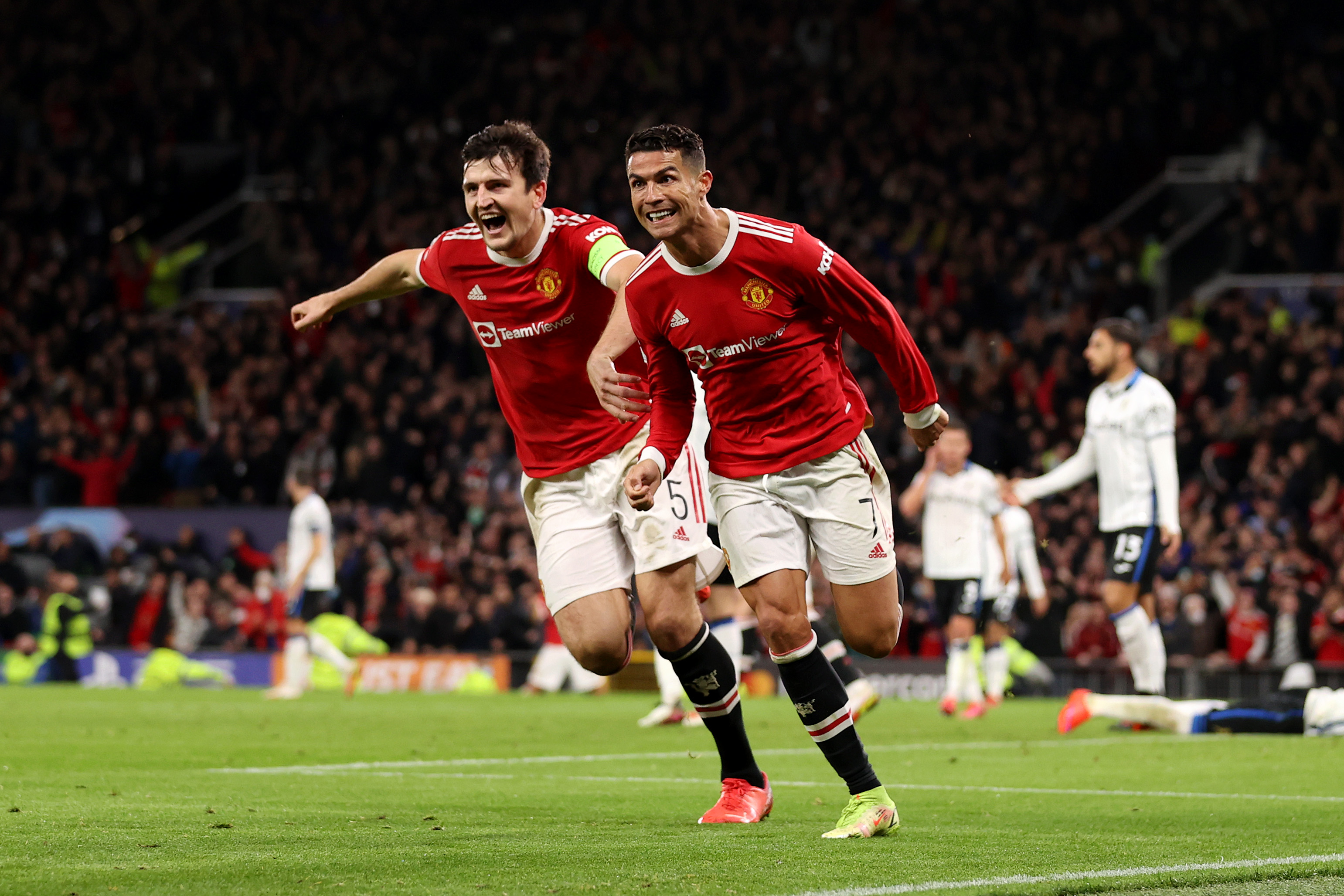 Harry Maguire and Ronaldo celebrate his winner against Atalanta

Pogba has been effective this season. His start, in terms of consistency, his best since his return from Turin. On paper, the Premier League assists record affirms that. But it runs deeper than simply stats. The Frenchman has performed well. He has shown he can be a key part of a team in it's final building phase. But in the clinches. In a key moment for careers. The manager couldn't trust him. Those defensive lapses simply could not be overlooked when it came to the crunch.

At 28, those deficiencies are clearly there to stay. Concentration. Positioning. Discipline. All aspects in Pogba's game that hurt those around him when not in possession. On the ball, as mentioned, he's looked the brightest he has in a United shirt. But defensively, nothing has changed since that night against Southampton five years ago.

Wednesday night's decision was a long time coming. Raiola isn't happy. And it'll be interesting to hear what the Italian says the next time a microphone is put in front of him. But the signs are, he and Pogba may've missed the memo. It appears United are preparing to move forward without the Frenchman.

The noise coming out of Carrington is Solskjaer does want another midfield addition. Indeed, there's some frustration that management failed to deliver such signing over the summer market. What's significant, even as Pogba's contract runs down, is the players being mentioned: Declan Rice of West Ham United and Leeds United's Kalvin Phillips. The prospect of a direct replacement for Pogba isn't high on the agenda. While negotiations with Raiola have been put on standby - via Pogba's request - there's nothing coming out Carrington about contingency plans. Indeed, it's been agents who have been approaching United intermediaries about replacements. Lorenzo Insigne, the Napoli captain, for one being offered to United last week.

Instead, Solskjaer and United appear to be going in a different direction. And his decisions on Wednesday night reinforce that. There's no place for Pogba in his best XI. And he's not drawing up any plans to go forward with such a player should Raiola fail to reach terms with Richard Arnold and co.

This week, the relationship between Solskjaer and Pogba experienced a major shift. But it's not like any of us weren't warned. After Leicester, something clearly had to give...