Liverpool are continually streaking faster and faster towards the coveted Premier League trophy as they beat rivals Manchester United, and the chasing pack of Leicester and Manchester City both slipped on banana peels in the form of Burnley and Crystal Palace.

It was draws galore around the League, with the big clubs of Spurs and Arsenal being well held, along with Frank Lampard's men losing to a defensively solid Newcastle. Eddie Howe at the other end of the table also has problems with his side crumbling to bottom placed Norwich, putting his club well and truly into the furnace.

We here at tribalfootballlook at the top performers from Matchday 23 in the Tribal Football Team Of The Week. 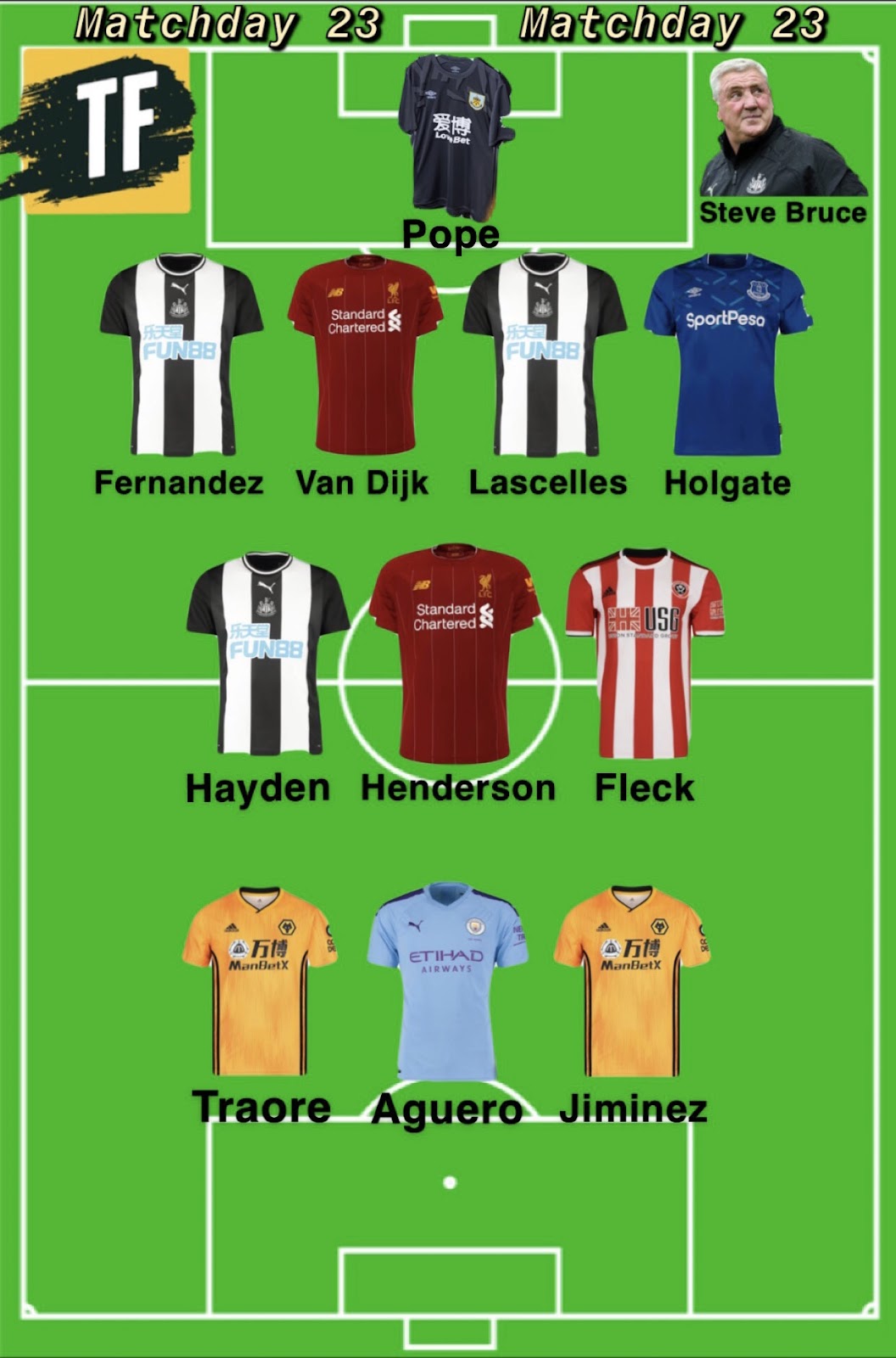 Pope between the sticks produced a man-of-the-match heroic performance in Burnley's 2-1 victory of Leicester.

Pope made 7 saves, none more impressive than his denial of Jamie Vardy from the Penalty Spot.

Liverpool's defensive rock produced another dominant display as the Reds fly further into the distance towards the long awaited Premier League title.

Van Dijk was defensively robust with 8 clearances and winning 3 aerial duels, however he made his presence most felt with a towering header, when he bullied the United defence to power the ball into the back of the net and open the scoring.

Newcastle's extraordinary smash-and-grab win at home to Chelsea was built off the back of a rigid defense, clearly bolstered by the return of their Captain, Jamaal Lascelles.

The skipper was superb on return from injury, continually abrogating the Chelsea front-line, making 11 clearances and winning 5 aerial duels.

His commanding presence in the backline is certainly key to the magpies going forward.

Despite carrying a knock coming into the game, Holgate was defensively astute at the back, rising to be one of the key players in Ancelotti's side.

Holgate made 5 clearances and 4 tackles along with a flicked on header at the near post for Calvert-Lewin to tuck home and equalise the scores.

The Argentine has been in fine form at the back all season for Newcastle, and the weekend was no exception as he was hugely influential in quelling the likes of Willian and Abraham.

Fernandez made 6 clearances, 2 tackles and 2 interceptions in a strong defensive display, however he also provided a spark going the other way with 1 key pass, 2 dribbles and 8 long balls.

The Liverpool Captain is certainly not shirking his responsibilities in the midfield, Leading his side well and truly from the front.

The Englishman was dogged in midfield, making 6 tackles and winning 7 ground duels, as well as generally controlling the game along with his impressive partner Gini Wijnaldum.

Another tireless performance from Isaac Hayden in midfield, whose impressive tackling and pressing often goes under the radar.

However this week along with his usual defensive duties against Chelsea, Hayden grabbed the headlines with an injury-time header to steal all three points for the Magpies.

The Blades pocket-powerhouse was once again a bundle of energy in the Sheffield midfield and a key part of their draw away at the Emirates.

It was a true midfield performance from the Scotsman, who was tireless in defence making 4 tackles and 2 clearances, but also dangerous going forward, grabbing the equaliser to gift the Blades a well-deserved point.

The marauding Malian winger is tearing up the Premier League now on a consistent basis, with his flowing hair and powerful tree-trunk legs terrifying the League's defences.

Wolves' win at St Mary's was no different, with Traore a key player in the club's impressive come-from-behind victory.

Traore completed a staggering 9 dribbles along with 2 assists to lead his club to all 3 points.

Form is temporary but class is permanent as Kun Aguero continues to prove to the Premier League with another brace, this time against Palace.

Manchester City may have fallen short against their opponents from South London, however the Argentine was dangerous with 6 shots on goal and 2 finding the back of the net.

Another of Wolves' in-form front men, Jiminez again put in a high-class performance against Southampton.

The Mexican front-man had 5 shots on target, 2 of which hit the back of the net, one a steely penalty and the other the winner to secure a famous 3 points at St Mary's.

MANAGER OF THE WEEK: STEVE BRUCE

Steve Bruce may have been in the industry for a very long time, but that sure hasn't made anything easier for 59 year old, who has certainly copped his fair share of adversity since taking the reigns of his boyhood club.

Forget about the fallout from Rafa Benitez, Bruce has had to deal with an injury toll that would make you think his side has gone to war.

With as many as 13 first-team players unavailable for the match against Chelsea, the chances of Newcastle taking points off the Blues seemed slim.

However despite losing Jetro Willems to an ACL injury early in the game, his side produced a defensively outstanding performance to keep Chelsea at bay, and even managed an injury-time winner to snatch all 3 points.

GOAL OF THE WEEK: JACK GREALISH

Grealish with another great finish Which club would you like to see him at? pic.twitter.com/MKAnsRia1d — ROOTE SPORTS (@Rootesports) January 19, 2020