December is upon us which in Premier League language translates to "Welcome to a month jam-packed with football".

This week provided a taste of what is to come this month with 30 matches played in the last 11 days.

This eventful week has seen Liverpool and Leicester fly through without a blemish, with the former leading the chasing pack by a considerable margin.

Champions Manchester City did however slip on multiple banana peels, held first away at Newcastle and then trounced at home by their cross town rivals who in turn have experienced a micro-revival, taking maximum points from Tottenham.

Newcastle and Palace leave the week slightly dumbfounded with an excellent 7 point dividend, as well as Southampton managing 2 wins against fellow relegation rivals.

Not only where the results tantalising, but there were some particular spectacular goals scored across the week, from thunderous volleys to absurdly special runs, as well as a handful of terrific goalkeeping displays.

We here at tribalfootballlook at the top performers from Matchday's 14-16 in a mega edition of the Tribal Football Team Of The Week. 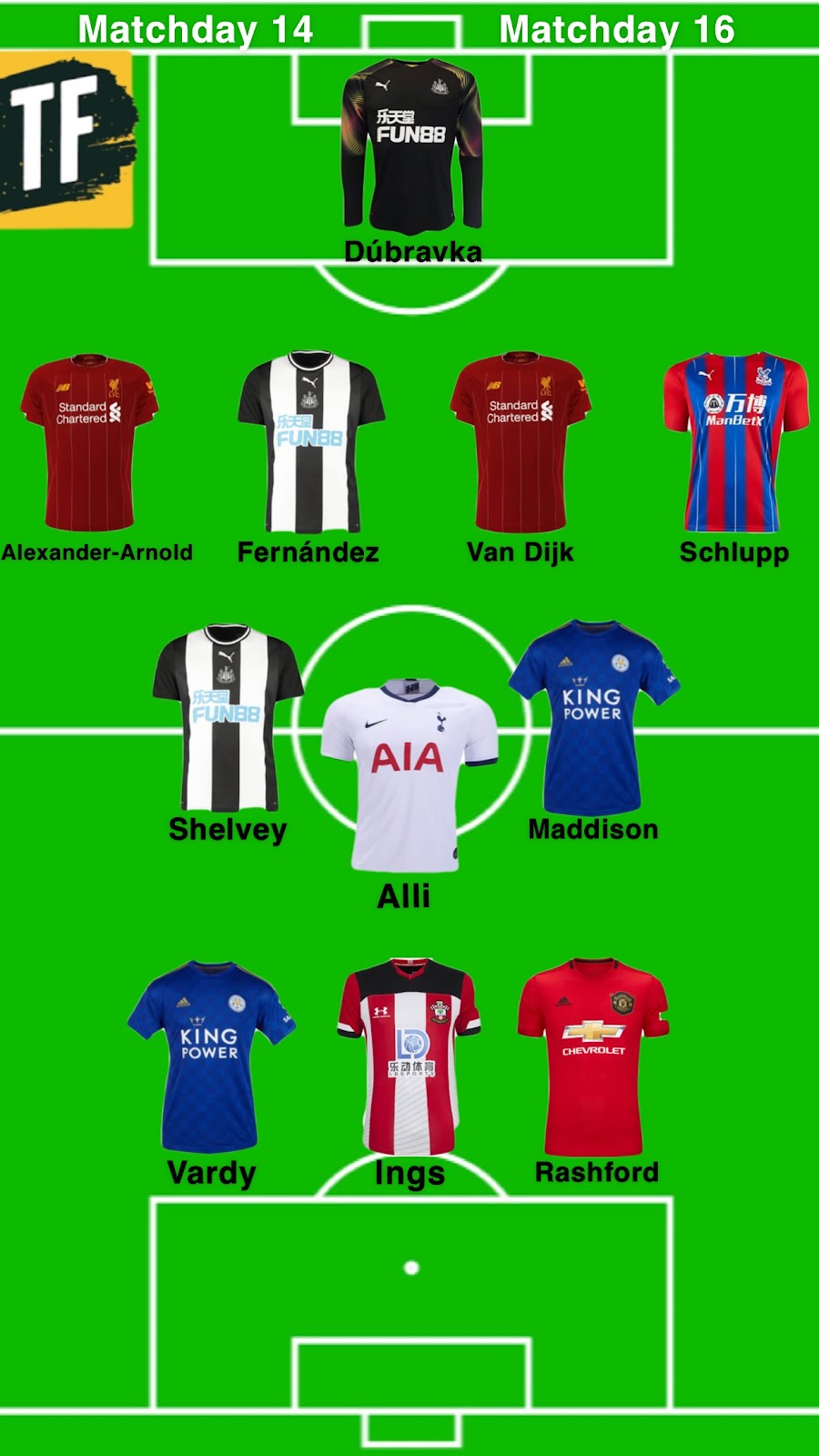 In a week that has propelled Newcastle United up the table, keeper' Martin Dubravka showed why he has played every game since signing for the club 66 games ago.

The gloveman has been vital to Newcastle's fortnight, producing three performances of the highest order, all including magnificent saves.

In total Dubravka made 17 saves across the three matchdays, earning man of the match honours against Sheffield United, and without him, there is no chance Newcastle would have gleaned 7 points from their 3 outings.

A player who every week continues to inflate his global reputation, Trent-Alexander Arnold again played an integral role in another perfect week for the seemingly unstoppable Reds.

Across the 3 matchdays, the full-back nonchalantly notched up 3 assists, constantly finding himself at the core of many of Liverpool's dangerous attacking moves.

A Steve Bruce side is always founded in a sturdy defence, and that defence in the wake of various injuries has been championed by Federico Fernandez.

The Argentine was a standout at the back over the three matchdays, making a total of 26 clearances and 9 interceptions, curbing the offensive prowess of Manchester City, and an in-form Sheffield United side.

There are many reasons why this Liverpool side has simply dominated the League so far, however, one would find it difficult to dispute the enormous role played by Virgil Van Dijk.

This week seems to have boasted all of the Dutchman's terrific talents, towering over defences to score a match winning brace against Brighton, and being particular defensively rigid against Bournemouth.

In total across the three matchdays, Van Dijk won 18 aerial duels and made 14 clearances in Liverpool's perfect 3/3 week.

In what has been a surprisingly successful week for Crystal Palace, the cameo role of Ghanian Jeffrey Schlupp has gone a long way to his side racking up 7 points in 3 matches.

With the game in the balance, Schlupp twice came off the bench to net home a goal that ensured 3 points for his side.

Rewarded for his efforts, Schlupp started at left-back against Watford aiding his side in claiming a clean sheet to finish off a successful week.

The mercurial midfielder is certainly flourishing under the tutelage of Steve Bruce, producing 3 commanding performances in his sides terrific week.

Shelvey headlined his performances with a goal in all 3, a long-range stadium-lifting belter against Manchester City, a clever goal at Bramall Lane when everyone had switched off, and a rousing header to start the revival against Southampton.

He truly has risen in stature, now sporting the captains armband, with his extraordinary vision and passing ability gifting his side that extra bit of quality to lift them into winning positions.

In a perfect week for the Foxes who are now on a daring run of 8 wins in a row, skilled midfielder James Maddison remained at the attacking heart of this electrifying side.

Maddison scored the match-securing goal at Watford and provided an assist in the foxes' dismantling of Aston Villa at Villa park. In total Maddison racked up 9 key passes, consistently breaking down defences with his ability to tell the ball what to do with his foot.

The Mourinho era has brought forth a flurry of exciting matches, filled with many goals and shows of individual skill, however most notably the revival of Dele Alli.

Alli seems to have benefitted the most from Mourinho's managing, appearing to be chosen as chief talisman.

Over the three matchdays, Alli scored 3 classy goals along with two assists, showing all the flair and skill that has taken him to the top level.

The quality of Marcus Rashford and his creative eye for goal has stood out as the driving factor for Manchester United's Lazarus-like week.

Rashford produced a man-of-the-match performance in his sides shock victory against Tottenham, where he scored two match winning goals. Across the week he has scored 3 goals, tallying 11 shots on goal with two rattling the woodwork, looking to be a figurehead to drive forward this youthful side.

Jamie Vardy is certainly having a party with this brilliant Leicester side that went 3/3 from the week. Scoring is simply a given for the foxes frontman, who has notched home 4 goals in 3 matches, taking him to a tally of 16 goals, sitting pretty at the top of the pile (5 goals clear).

His ability to sprint in behind defences and punish opponents is becoming a hallmark of this Leicester side who are breathing down the necks of the marauding Liverpool frontrunners.

Life might not be so glamorous at the bottom of the Premier League table, but the last week has done a world of good for Ralph Hasenhüttl's men.

In a week where they produced 2 huge wins over relegation rivals, the saints looked to their frontman Danny Ings who did what he does best and netted goals in all 3 matches.

His goals have dragged his side to the brink of the relegation zone in an inspired week for the likeable Englishman.

Whenever the United manager seems to be falling into a pit of insurmountable pressure, the Norwegian always somehow manages to drag his side out of the depths of despair to raise the moral of Old Trafford.

After a relatively insipid performance against Aston Villa, things looked rather dour for United with huge games coming up against a fired up Mourinho-led Tottenham and the Champions Manchester City. However, the Red Devils managed to turn things around with back to back 2-1 wins, shocking the league with a recuperated dynamism led by the likes of Rashford and Fred.

Ole's United problems may not be over, but these two huge results certainly go a long way in the hearts of United fans and potentially the United boardroom.

Wow. There are simply no words to describe the magnificence of this goal. Enjoy.