The final round of Premier League fixtures takes place this Sunday, and there is a lot left to decide. One of the biggest uncertainties is who seals Champions League qualification for next season, with Manchester United, Chelsea and Leicester in third, fourth and fifth place respectively and separated by just one point.

While Chelsea host Wolves in a game they are expected to get something from and all but ensure a top-four finish, Leicester City welcome Manchester United to the King Power Stadium in what essentially looks like a straight shootout for a place in Europe's elite club competition come 2020/21. Here is our tactical preview of the game.

Leicester go into this game knowing they probably need a win to crack the top four, but they haven't enjoyed a lot of wins lately. Since the turn of the year, they have won just five of 17 Premier League games. Their complete record in this time is five wins, five draws, seven defeats, with a goal difference of +4. It's more mid-table than Champions League, and there haven't been many positive signs of change recently to inspire optimism of a glorious finale.

Brendan Rodgers has brought in a back three system, with two inside forwards supporting Jamie Vardy up top, but it hasn't arrested the team's slide. And, with some of his best defenders out – Ricardo Pereira, Ben Chilwell, and Caglar Soyuncu – the new-look defensive line has looked incredibly shaky.

The problem is two-fold, both attacking and defensive. In possession, the likes of Ryan Bennett, Wes Morgan and Jonny Evans don't look comfortable playing out from the back. Out of possession, they are struggling to clear their lines.

Leicester's shocking 4-1 defeat away to relegation-threatened Bournemouth exemplified both of these issues. Some comically bad decisions in build-up led to the home side's first and third goals, while an inability to win the first ball was at the heart of Bourmemouth's second.

Away to Tottenham last weekend, these issues arose once again. Below we see an example of the lack of organisation present in Leicester's new back line. Evans goes up for what should be a simple headed clearance of a long ball from Hugo Lloris, but left wing-back Luke Thomas runs into him. Either Evans didn't shout, or Thomas ignored the call – either way, it's not good. Their collision means the ball runs free with Lucas Moura sprinting onto it. Evans is forced to foul. 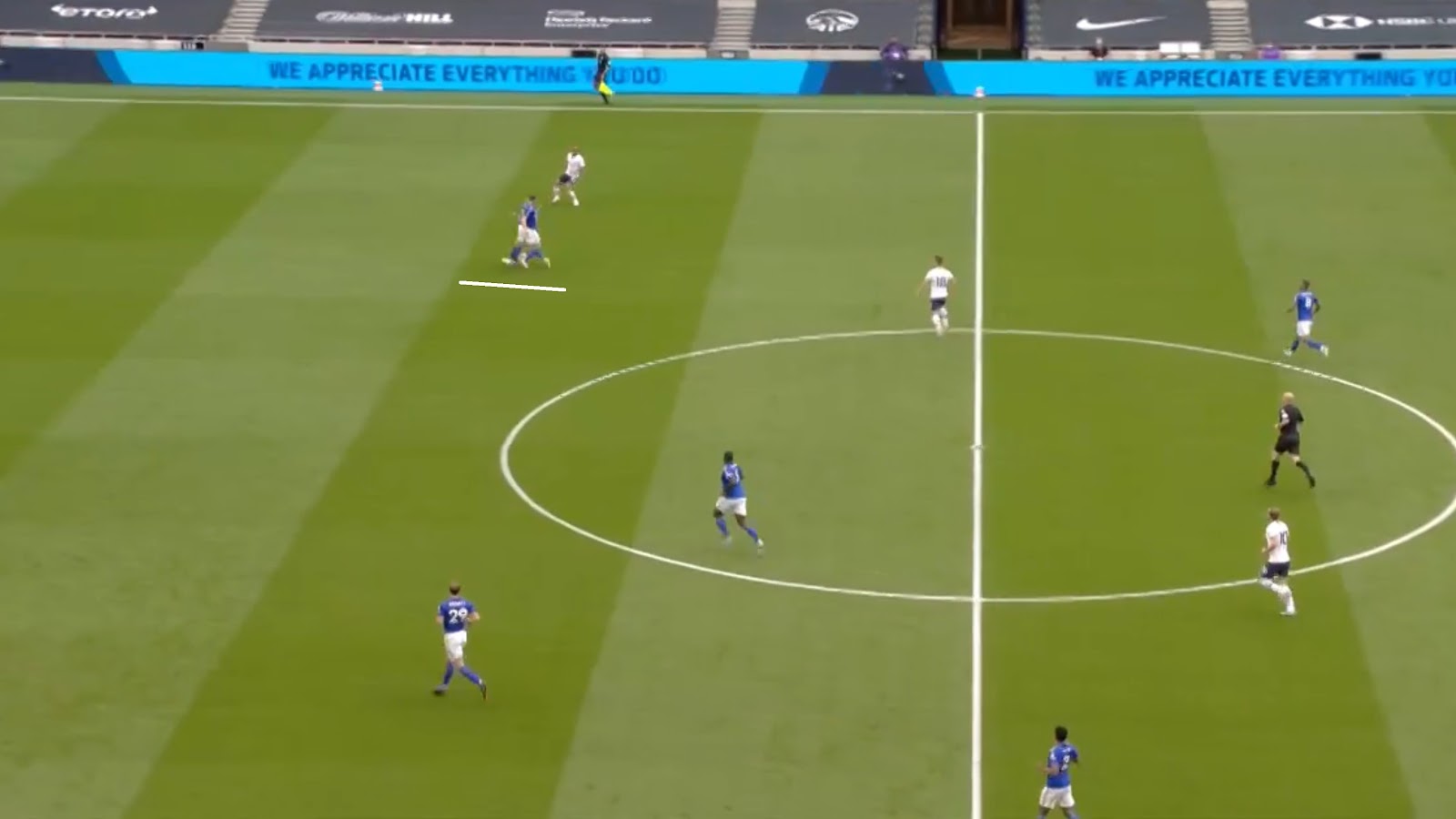 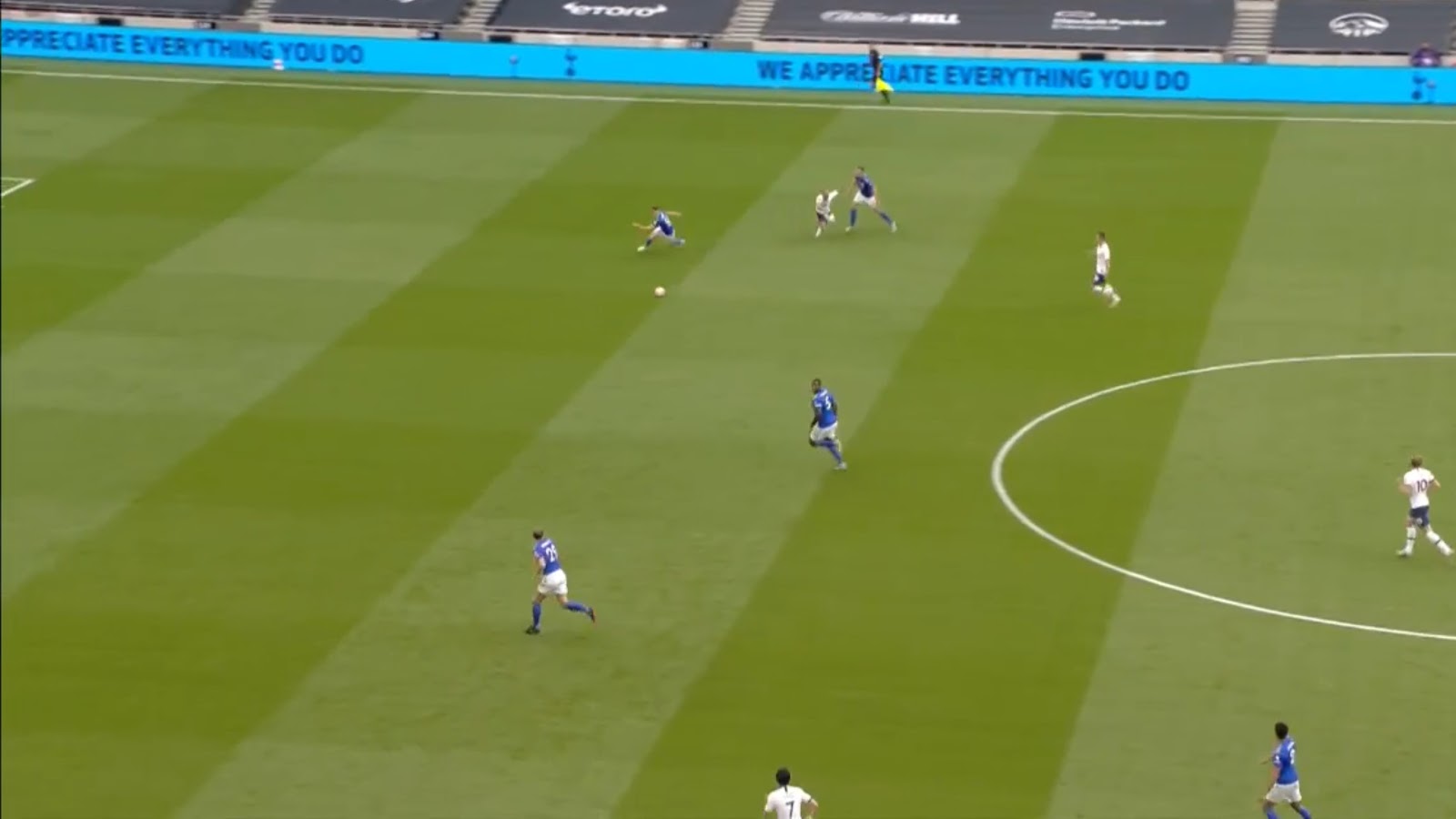 SHOULD SOLSKJAER COPY HIS PREDECESSOR?

Fortunately for Leicester, Manchester United aren't in great form either. A 3-1 defeat to Chelsea in the FA Cup semi-finals last week was followed up by an underwhelming performance in a draw with West Ham. Couple this with the fact that Leicester are – for all their poor form – undefeated in their last four home league games – and this weekend's match starts to look more even.

Against West Ham, Solskjaer moved away from the counter-attacking 3-4-1-2 system he used in the cup clash with Chelsea and in many other 'big' games this season, reverting back to the 4-2-3-1. The aim was to build out, break the first couple of lines of pressure, and get a very dangerous front four on the ball in the central and inside channels. The full-backs overlapped, allowing Mason Greenwood and Marcus Rashford to come in, receive on the half-turn, and dribble at the last line or shoot.

An example of this is seen below. United build out with Maguire driving forward into space, and Rashford finds a pocket between West Ham's winger and central midfielder to receive in. From here, he dribbles in onto his right foot and fires a shot at goal that can only be parried. 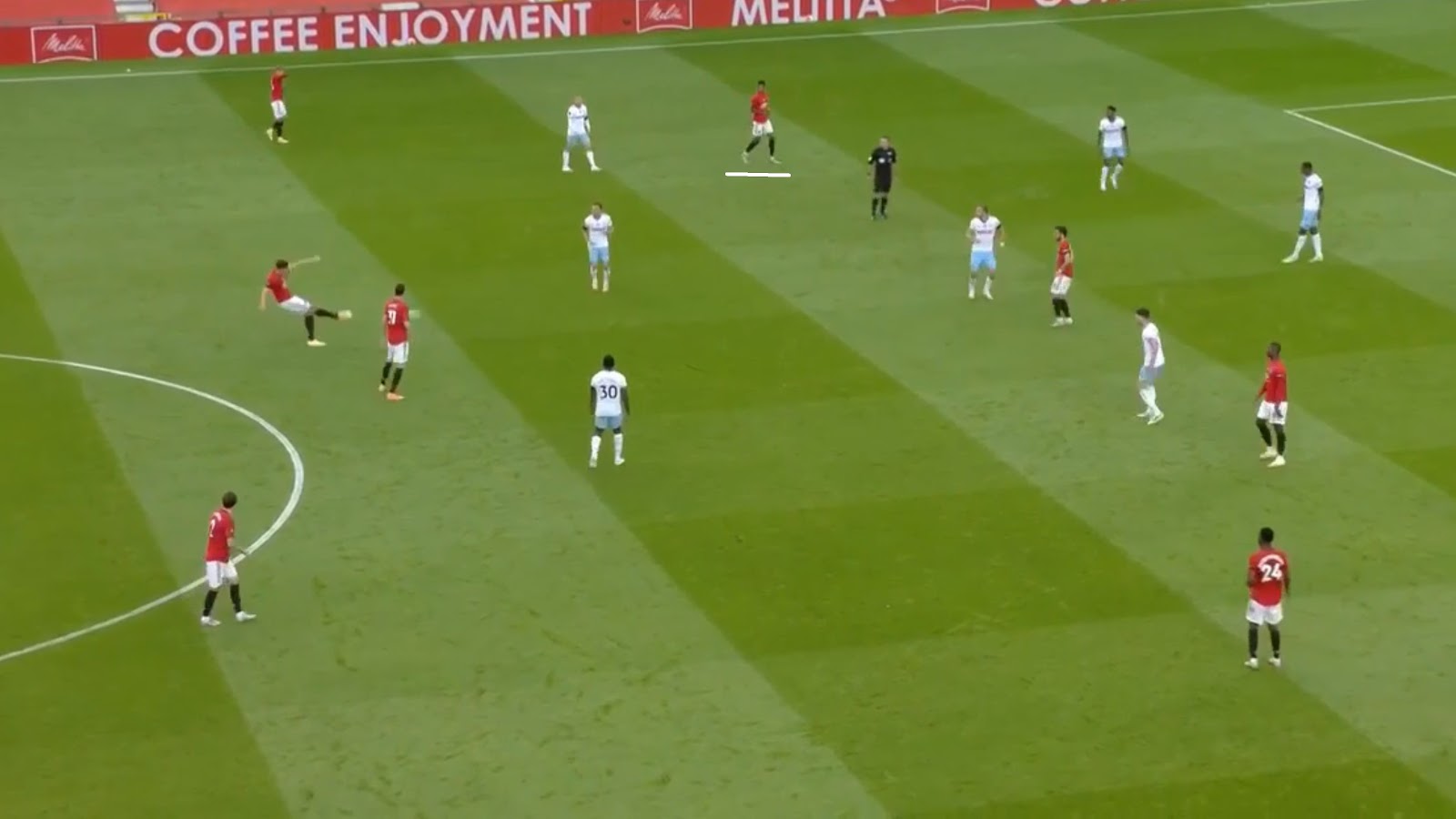 This might be the way many United fans want their team to play this weekend, but Solskjaer might be wise to ignore that pressure and set up with a counter-attacking approach again. He might even draw inspiration from his predecessor in the Manchester United hot-seat.

Jose Mourinho guided Spurs to the 3-0 win over Leicester last week with a passive low block. His side sat deep, took away the space behind, allowed Leicester's centre-backs to bring the ball out, and pounced on mistakes before counter-attacking clinically.

Here, Spurs let Evans have the ball and bring it forward without real pressure. They are in a 4-2-3-1 system with man-marking on Youri Tielemans, Leicester's best playmaking midfielder. Unable to find Tielemans, Evans attempts a more direct pass through the lines, which is cut out by Spurs' midfielders. Another counter-attack is initiated. 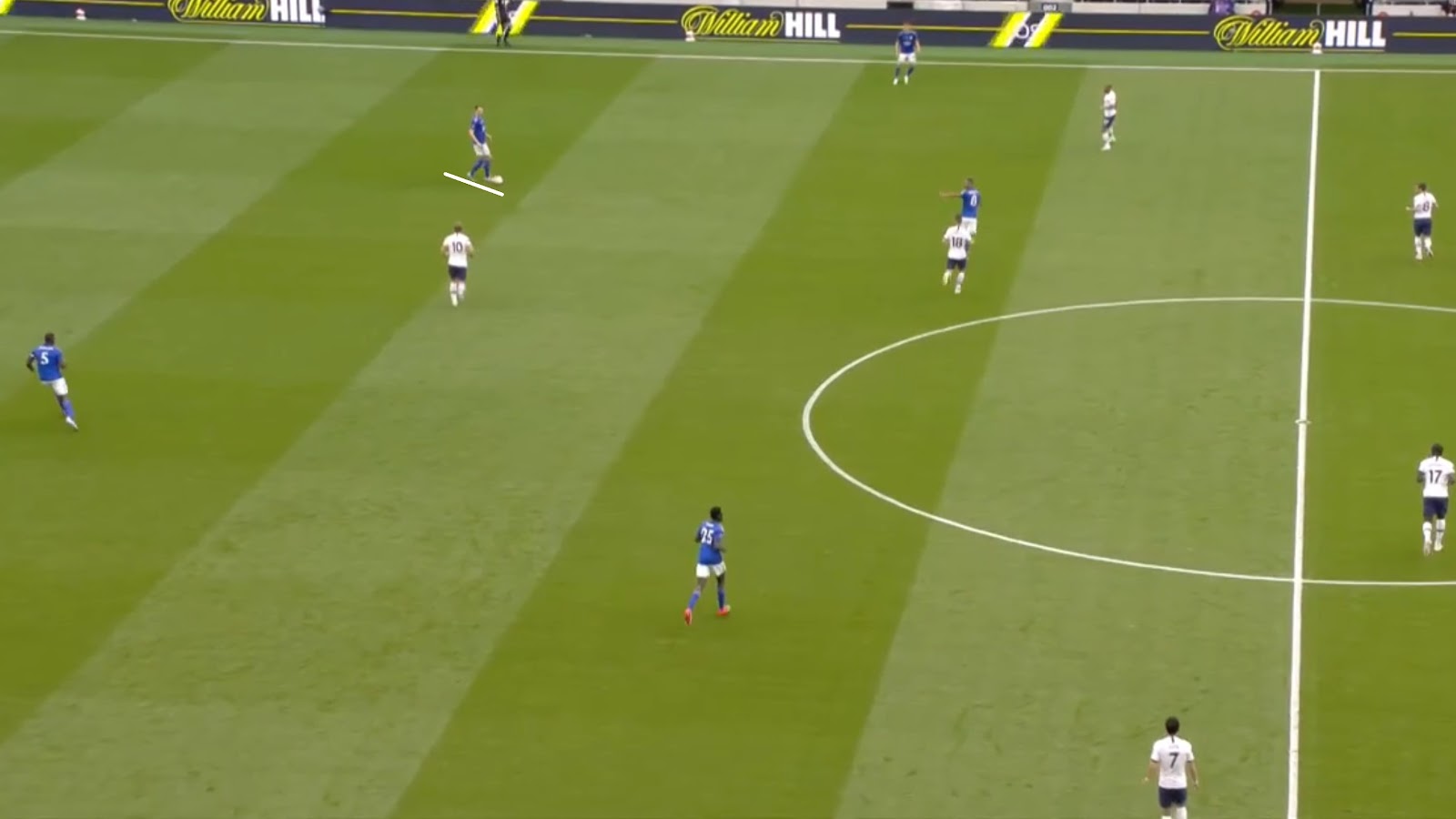 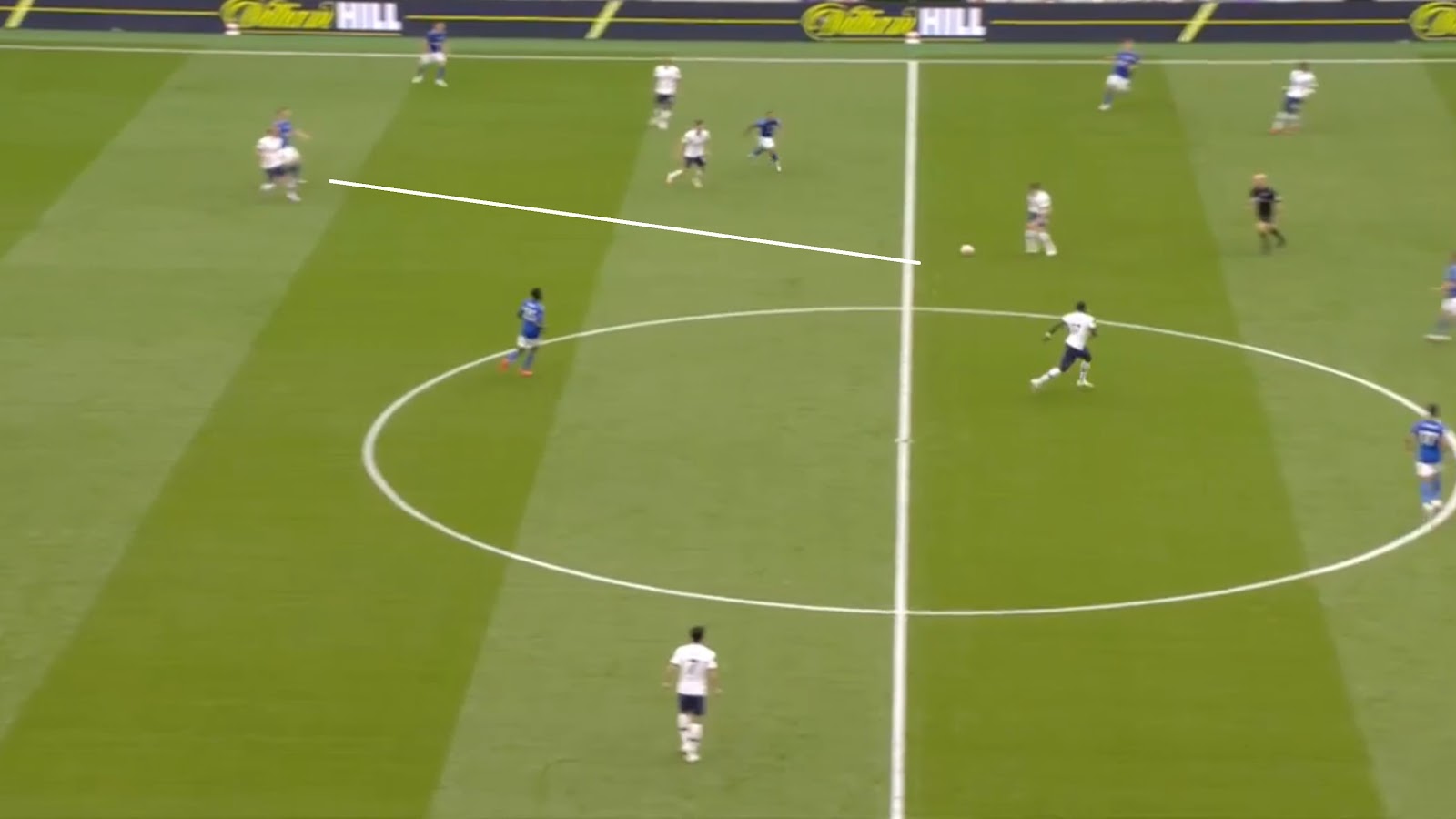 Manchester United aren't as well-drilled on the break as Spurs, but they do have options in transition. Bruno Fernandes and Paul Pogba can open up back lines with passing, while Rashford's dribbling, Anthony Martial's pace and Greenwood's deadly finishing ensure a multi-faceted counter-attacking threat. This is also a team that plays predominantly in a 4-2-3-1 and doesn't press *that* intensely.

With all of this in mind, Solskjaer may want to copy his predecessor's tactics, opt for a 4-2-3-1 with Fernandes behind Martial, sit back, wait for the mistakes and counter to end Leicester's Champions League dreams.