COMMENT: Saul Niguez is a good player. A player with the grounding to have him readymade for the Premier League. But whether that fit includes Chelsea and Thomas Tuchel, well that's another question altogether...

In black and white. It hasn't worked, has it? Well, at least until now. Another halftime hook for Saul in a Chelsea shirt - this time against Watford. Tuchel would later emphasise the booking he collected for reason to bin him at the break. Though Chelsea's manager also conceded for the style of player Saul is, he couldn't risk the Spaniard for the second-half.

"He was on a yellow card," Tuchel said. "We had two options, [the other was to] take Marcos [Alonso] off and put Saul as a wing-back. I had this in my mind before the game if something happened to Marcos, but it wasn't the right match to try new positions.

"It was him [who went off] to change the shape a little bit and have Thiago [Silva] on the pitch with the quality of organising, and Trevoh [Chalobah] in the six who is more physical.

"Unfortunately Trevoh injured himself so we ended up with Ruben in the single six. It was a tactical decision and we go on from here."

So mix and match. Read and adapt. Certain players to move into certain positions. But for all that Tuchel's explanation involved, in the end, when you cut through it all, it came down to trust. His manager couldn't trust Saul to stay disciplined and avoid another booking. And he also couldn't trust Saul to work in an unfamiliar position. A second roll of the dice and it's flopped again.

The first attempt came in September. Again, Saul would last a half of football before being hauled off during victory against Aston Villa. Tuchel, in the aftermath, didn't sugar-coat his reasons: "We could see Saul struggle to adapt to the intensity, instructions, style of play and intensity of the Premier League.

"It was hard to do, I had a feeling he struggled. He made some mistakes, passing mistakes and errors and struggled with the intensity." 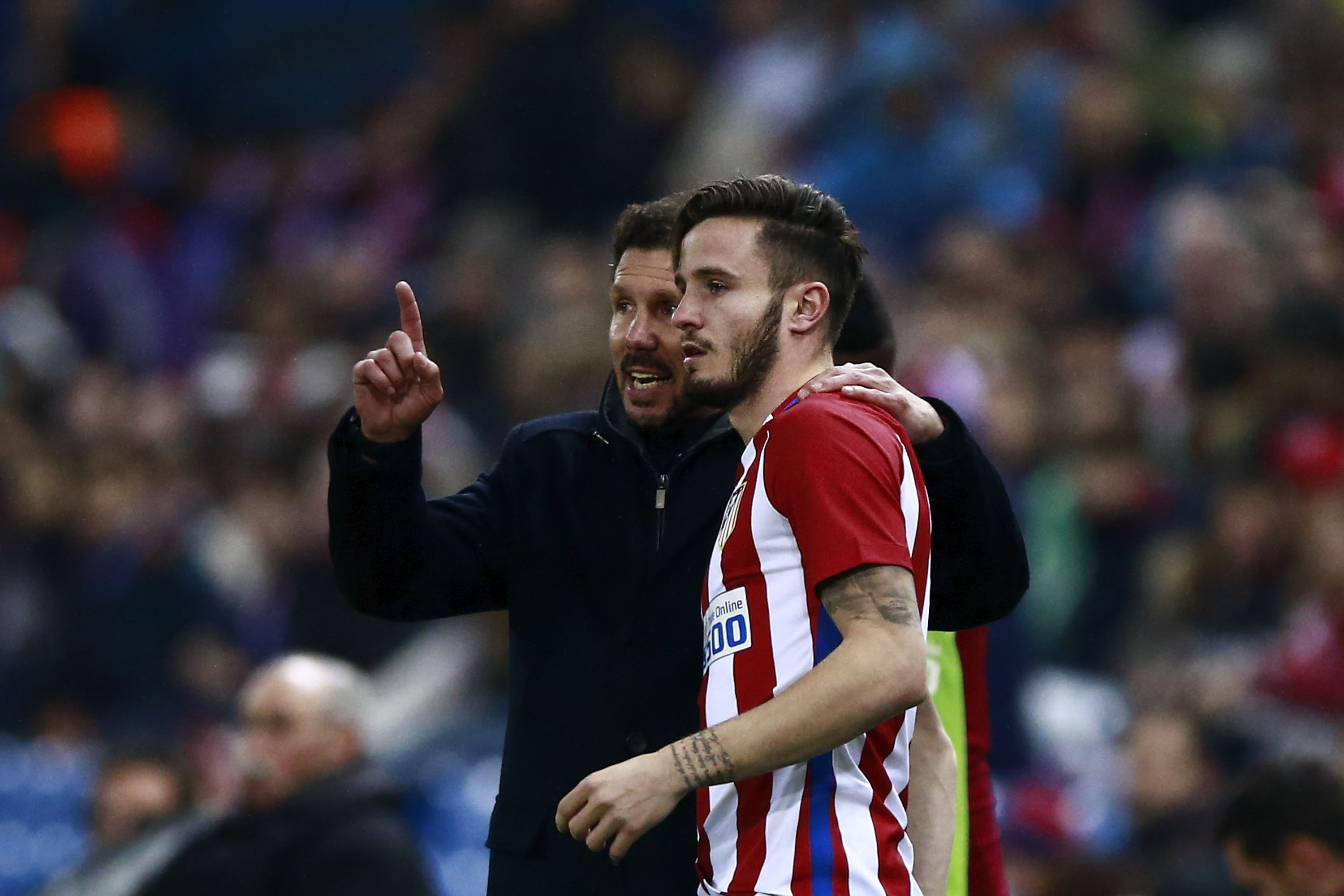 Simeone and Saul together with Atletico

Cycle three months forward and it appears little has changed. It just hasn't happened for Saul. And it's a crisis. A career crisis. Saul isn't just any old player. In Spain, we're talking a phenomenon. The best of a generation. A player to carry a club - a country - on his shoulders. Yet now reduced to scrapping for bits and peices off the bench, or needing to live down the ignominy of a halftime hook.

He's even been branded a charity case. Rumours out of Madrid claiming Chelsea took on Saul as a favour for English agent Jonathan Barnett - all with the approval of Tuchel. The situation is so acute for the Atletico Madrid loanee, that Tuchel addressed - and rubbished - the speculation last week. And of course, it was rubbish. In this age of Financial Fair Play, that such a line of thinking could gain any traction is ridiculous. More so when we're talking about a player of Saul's ability and reputation. If you're offered Saul - and you have a need - you take him. But that's with an emphasis on the need.

Before all the drama of deadline day at the Bridge, Saul was also offered to Pep Guardiola. A good fit. A player long coveted by Barcelona, where Guardiola's legacy continues to be felt. But Manchester City's manager turned the approach down. With Bernardo Silva having been convinced to stay put. With Phil Foden, Kevin De Bruyne and Riyad Mahrez all available and willing to play in that central attacking midfield role. Guardiola didn't see the point of overkill and so passed on taking Saul off Atletico's hands.

And this goes some way to reason why we're seeing Saul struggle as he is in London. Unlike how he was sold by some scribes, the Spain international isn't a box-to-box midfielder. He isn't one to win it and give it. His strengths are in the final third. Creating and scoring chances. He's Bernardo with a greater physical presence. Or, should we say Mason Mount, Hakim Ziyech or Ross Barkley. You get the picture...

He is good enough to play in that position for Chelsea. But without a preseason with his new teammates. Without any chance of adjustment. Given the options in front of Tuchel, Saul is way, way back in the queue. And as coaching staff at Atleti watch on, the great irony is if he is to find a place in Tuchel's XI, it won't be in his preferred position.

This was the barb Saul fired back at Atleti after inking his season-long deal, "I have been playing in different positions for three seasons," Saul stated, "I wanted to take up other movements and positions that I could not perform from the other positions I was being played in."

But now, given Tuchel's thoughts of a wing-back role, Saul finds himself back at square one. And FIFA exemption apart, he's also stuck at Chelsea for the remainder of the season after turning out for Atleti in the opening weeks of the campaign. Indeed as it stands, Saul has seen over three times more action as an Atleti player this season as he has with Chelsea... This really hasn't worked, has it?

Chelsea just aren't that. And as Tuchel acted in midweek, with the options available to him, there is no reason to persist. Saul has everything in his locker to succeed in England, but on current evidence, it won't be with Chelsea.