COMMENT: Ralf Rangnick and Manchester United. For the German, the question has been doing the rounds this week: why United and not Chelsea? But a similar one can be leveled at United's board: why Rangnick now and not then...?

The 'then' we're referring to is around two years ago as United were in the midst of seeking to appoint a first ever technical director. Of course, in the end they chose to promote from within, with John Murtough and Darren Fletcher now sharing the responsibilities. But before then, at least how it was sold, United were apparently considering an outside hire and Rangnick featured heavily amongst the candidates. Indeed, this column wrote at the time of the German publicly touting himself to United as it was claimed Ed Woodward was prepared to water down his powers as vice-chairman and bring in a football man to work the market.

How serious the whole exercise was... well, you can make your own assessment of that. But at the time, with Rangnick available and enthusiastic about the job, he was passed over. Now two years on, not only do United want him, they want him as manager. A position he hasn't held since the end of the 2018/19 season with Red Bull Leipzig.

Instead, since then, rather than being on the training pitch, he's been working as Red Bull's global manager. That is, before leaving this year to take up the technical director's position at Lokomotiv Moscow. Now less than six months into his contract, he's skipping out on Loko to take up the manager's position at United - to June.

At least that's what's planned. At the time of writing, even with Loko having agreed compensation terms with United, negotiations with Rangnick have hit a stumbling block. Those involved are keeping things tight. Watertight. Though there is speculation Rangnick is seeking guarantees beyond the end of the season. Many citing comments made about turning down Chelsea post- Frank Lampard as a guess as to why talks have slowed down.

"I said: 'I would like to come and work with you, but I can't do it for four months. I'm not an interim coach," Rangnick would later explain. "It would have to be something special (working in England). It depends on the club and whether you want to work with a German coach."

One flyer is United are prepared to offer Rangnick a role as 'consultant' once he's fulfilled his manager duties. His potential input two years ago was rejected, but now United's board are willing to have him involved... 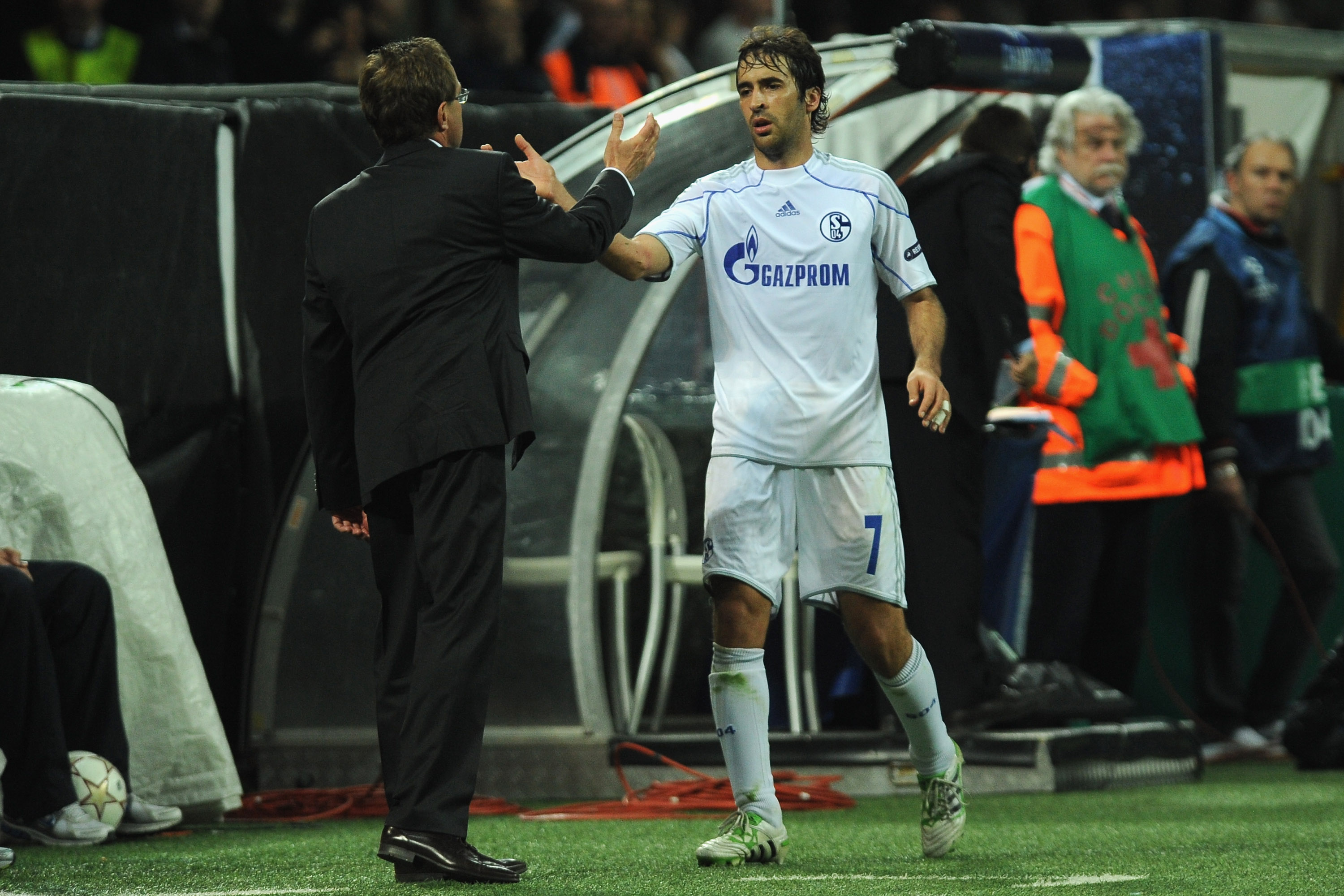 Rangnick and Raul together at Schalke

Alexei Kirichek, a former executive director at Loko, can understand United's approach, likening it to Chelsea working with Guus Hiddink, whom twice was installed as caretaker manager at Stamford Bridge: "Probably Manchester United didn't find anyone better, they decided to follow the path of Chelsea when they invited (Guus) Hiddink. During these six months they will not lose anything. And then they will choose a new coach or again agree with Ralf."

Indeed, just as Hiddink became available to Chelsea thanks to a good relationship with their Russian owner Roman Abramovich, we're hearing Woodward has long admired Rangnick and would be the driving force inside the board room to bring him in as short-term manager.

But Rangnick isn't Hiddink. He's not even close. Yes, he has a good reputation inside German football and amongst their celebs. But he doesn't have the honours that Hiddink achieved during his career. Nor does he even have the coaching experience. Yes, there's been nice soundbites from the likes of Thomas Tuchel and Jurgen Klopp. And there's been the inevitable flowery predictions from the 'anyone-but-Ole' press. But the last time Rangnick was managing a dressing room, Jose Mourinho was still in charge of United. Ernesto Valverde was leading Barcelona. And Cristiano Ronaldo was in his first season with Juventus.

Watching from the outside at Loko, there's a sense that Woodward and United are doing them a favour. Since news broke of United's approach, while those inside the club have maintained a professional silence, former directors and presidents have been climbing over eachother to tell us what they think of the German.

Olga Smorodskaya, a former president, stated: “I was expecting something like this. I didn't think it would be Manchester United. He will not find any glory there. It was obvious that he would leave the club.

Another former president, Nikolai Naumov, stated: "Rangnick is a merchant.

"He absolutely does not care about football, because he only does business around him. And the more countries, leagues and football clubs he covers, the more he will earn.

"He's absolutely indifferent to Lokomotiv. He did not come here to raise football, but to earn money."

For this column, as much as we were bullish two years ago about the prospect of Rangnick moving to United, the admiration has since tailed off. His contact with Ivan Gazidis, AC Milan's former Arsenal chief exec, last season was a disappointment. Gazidis openly working to replace Stefano Pioli with the German, going behind the backs of directors Paolo Maldini and Zvonimir Boban in the process. Boban would eventually pay with his job; Gazidis lobbying to have the Rossonero legend sacked after Boban had publicly criticised his actions.

And while this column would reject criticism at this stage of Rangnick's summer dealings for Loko, we've learned that he never resided in Moscow. He worked hard to convince the likes of Tino Anjorin, a Chelsea loanee, and Gyrano Kerk, formerly of Utrecht, to make the move. But he never thought of being on the ground with these young players day-to-day to help the adaption process. Now he's skipping out on them altogether. In Moscow no less. And given the opinion of Smorodskaya, an environment hostile to Loko's summer arrivals.

Instead, he's about to land on his feet. Welcomed by an enthusiastic support. A relieved board. And an incurious press. But the question still remains for Rangnick and United: why now and not then?