Premier League preview: Why Arsenal & Arteta on the verge of breakthrough

There is a widely held view that Mikel Arteta over-coaches his players; that he is a robotic tactician without the nuance to create a fluid and dynamic team; that Arsenal staggered through last season; and that no real progress is being made. It is entirely inaccurate.

When Arteta first arrived at the Emirates it was universally understood it would take a long time to clear the deadwood and re-energise a club that has been stagnating for well over a decade, and yet the young manager has not been given the sort of patience we all knew he needed. Granted, his first full season in charge ended with Arsenal outside the European places for the first time in a quarter of a century, while for long stretches of the campaign the football was dreary and a little aimless looking.

But there is one pretty big caveat to apply to all this: the pandemic. For Arteta, a tactician who coaches with immaculate detail like his mentor Pep Guardiola, the lack of training time both during the season and in the summer of 2020 has severely disrupted his plans – plans that, in the three short months he was in charge before the first lockdown in England, were going rather well.

His fine start at Arsenal was defined by sophisticated rhythms of possession and a general maturity following the chaos of the last days of Unai Emery. The fact that this fell apart as Arsenal began to play with brain frog can be attributed, at least in part, to the physical and psychological effects of the pandemic.

What's more, despite the perception of poor performances things have actually been steadily improving at Arsenal. They won 18 points from their final 10 Premier League games of 2020/21, putting them fourth in the form table, while the club's rolling xG under his management shows an upward trend: 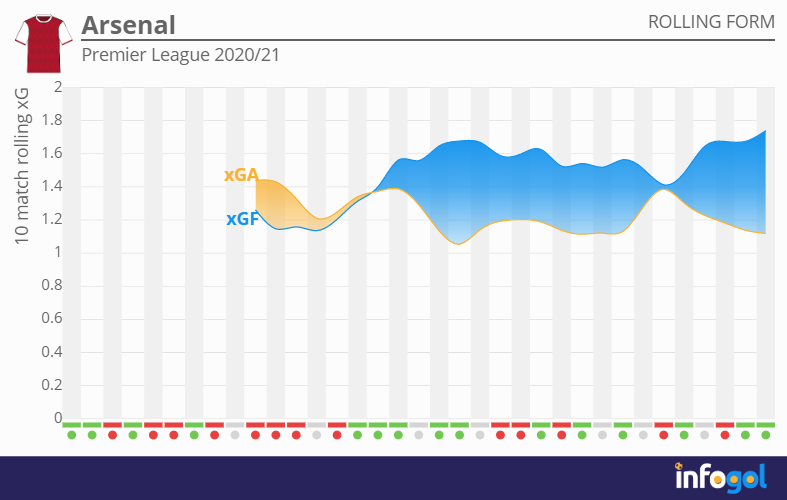 And so there is good reason to believe Arteta's first uninterrupted summer at the club could make Arsenal the surprise hit of the season. Tacticians like the Spaniard demand a full pre-season to get their ideas across, while those freed up midweeks – Arteta will be delighted to avoid the Thursday-Sunday schedule – only adds to the sense Arsenal can play with clarity throughout 2021/22.

Some smart acquisitions are also cause for optimism, even if Arsenal could do with fresh faces in the final third. Ben White is clearly overpriced at £50 million and yet his passing range should significantly improve Arsenal's ball progressions out from the back, fixing a long-standing issue under Arteta. He likes to play through the lines, starting from the centre-backs, in order to draw the opposition press and work carefully through it, but over the last 18 months individual errors have seen the system unravel.

White is a crucial piece in this complex puzzle, as is midfielder Albert Sambi Lokonga. The 21-year-old is just the sort of weaving, wriggling midfield creative presence Arsenal have been craving to play alongside Thomas Partey in the middle, and like White he will add verticality and line-breaking dynamism to a team that too often passed sideways last year.

Arteta was often criticised for this stagnancy, as if Arsenal's U-shape passing around the back was a deliberate strategy when in reality he simply lacked the right players to deploy his Guardiola-influenced ideas. Clearly the Gunners could do with another striker, and will hope to add Martin Odegaard before the window is out, but with White and Lokonga they are much closer to being a top-four side.

The Arsenal of 2021/22 ought to be faster, slicker, and more direct than the team we saw last year, which can only help bring the best out of Bukayo Saka and Emile Smith-Rowe, not to mention Pierre-Emerick Aubameyang after a poor season by his own standards.

In other words, there is a lot for Arsenal supporters to be optimistic about. In recent years both Chelsea and Leicester City have won the Premier League title the season after finishing outside the European places, and while Arsenal are incapable of such a feat they should similarly benefit from seven-day breaks between games.

Arteta will relish the extra time on the training ground to drill his tactical ideas into a talented young team that, slowly but surely, is beginning to form into a coherent whole. The brilliant form at the back of last season flew under the radar, but if they carry it into the 2021/22 campaign then pundits will finally take notice. That Everton and Tottenham Hotspur look weaker this year can only help the cause.

It is often difficult to spot progress until the final pieces click together, the tactical patterns seeming disordered until the last cog is in place. Arsenal, just maybe, are on the verge of a breakthrough.