Osimhen, SMS & Judge: Why past week can be watershed for Arnold's Man Utd

COMMENT: A massive striker bid made; talks underway with a long-term midfield target and the club's prime 'fixer' is resigning. Under this new chief exec, it's all kicking off at Manchester United...

At least that's what we're getting from the Italian press. In the week that Matt Judge's resignation emerges, United fans received news of a €100m offer for Victor Osimhen now being in front of Aurelio de Laurentiis, Napoli's movie mogul president. Then 48 hours later the agent Mateja Kezman, a Premier League winner with Chelsea, announced he's speaking with PSG and Manchester United on behalf of his client, Sergej Milinkovic-Savic. And furthermore, the Lazio midfielder actually favours a move to England.

"Sergej has no shortage of offers for the summer transfer window," declared Kezman. "At the moment we are dealing with Manchester United and Paris Saint-Germain. He is focused on the end of the season with Lazio, but Sergej wants to go to Manchester."

Kezman's camp have since distanced themselves from the quotes. Though a good 72 hours since being made, we've not had any direct denial from Kezman, himself.

So we're off. The green light is on. Under Richard Arnold, the club's new chief exec, United are shaking trees. Bids are in. Negotiations have begun. Whether deals can get over the line, only time will tell. But for United, with the market still weeks away from swinging open, it's action, action, action.

Of course, Erik ten Hag's appointment and the speculation around how the departing Ajax coach will approach the job has filled the room. But United have been making massive changes behind the scenes since the turn of the year. Arnold's predecessor, Ed Woodward, is now a memory. The former vice-chairman exec being completely cut loose by the club. Chief scouts Jim Lawlor and Marcel Bout have been removed. And now Judge, effectively United's dealmaker and boss of football operations, is walking (or was he pushed?) too. This overhaul of United's approach to recruitment and the market cannot be underestimated.

Nor can Arnold's influence in all this. Pushing out Lawlor and Bout. Accepting Judge's resignation. Someone has made these calls. Lawlor had been with United for 16 years. Bout for eight. Judge for ten. Removing such identities doesn't come easy. But these decisions were made. And you can bet more are on the way.

Is Arnold driving this? Well that's his brief. To make these calls. Identify weaknesses. Act on them. As the team splutters and stutters under Ralf Rangnick - a Woodward hire - it's cloaking what is happening behind the scenes. 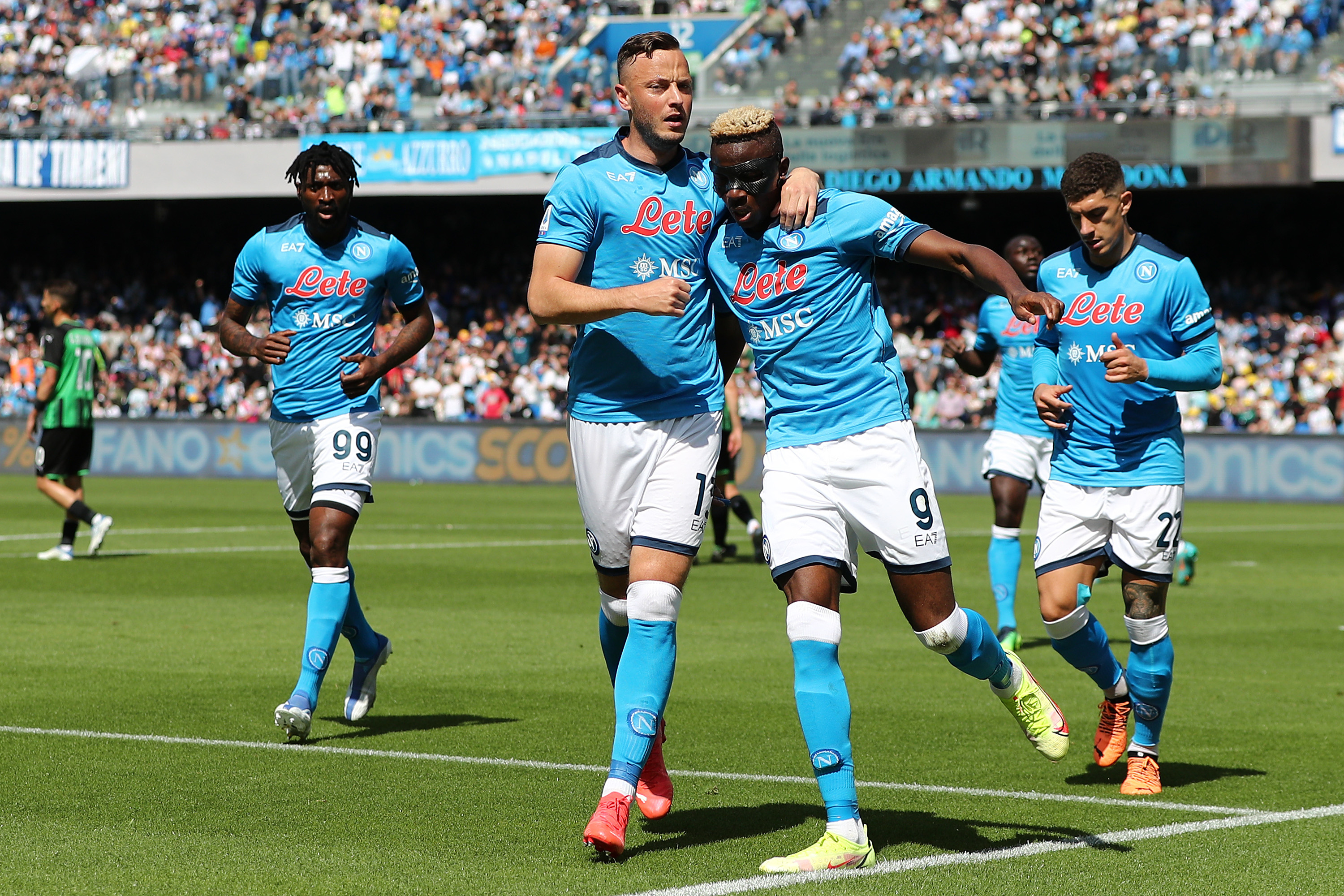 Osimhen scores in victory over Sassuolo on Saturday

Given the state of the squad as they lurch towards the end of this season, it can be reasoned that any decision - any change - is a good one at this stage. Particularly when it comes to scouting and recruitment. With new eyes and a fresh approach, things can quickly be recovered - even at United.

We've had our pop at Rangnick in this column, but the German was spot on when discussing what was needed for management to turn the club around. It needn't be years. It could be months. Twelve at most. Three excellent transfer windows, building on what the squad already boasts, and United can find themselves back amongst the elite. Rangnick effectively giving those paying attention an insight into what we've seen this past fortnight.

"It's not the manager's quality - it's changing all the other things that have brought the club into a position we are in right now," said Rangnick. "The good thing - one of the few - is it's crystal clear. You don't even need glasses to see the problems.

"Now it's only about how you can solve them. Not minor cosmetic things. This is an open heart operation. If everyone realises this has to happen and works together, it doesn't need to take years. It can happen within one year. Other clubs have shown it's possible within three transfer windows."

The caretaker manager's comments were made a fortnight ago - before Lawlor and Bout's departure. And also before Judge's resignation. The recruitment had to improve. It had to change. And that is only going to happen with different personalities in such roles.

There'll be restructure, for sure. But we'll also see new identities arrive to strengthen recruitment. Judge's departure has been claimed in some circles as a blow. But this is the same Matt Judge who was previously pulled apart by fans favourite Patrice Evra.

The Frenchman declared in a 2am rant: "A sporting director from a top football club called me and asked me to tell Matthew Judge to answer his phone.

"People need to understand we [United] send lawyers to talk to players. So when we send lawyers they talk about numbers, they are not people from the football world."

Two years on and maybe the penny has dropped? An early bid tabled for Osimhen. Terms now being discussed with Milinkovic-Savic. Two players to instantly improve this squad's strongest XI - and with their best years ahead of them. Grabbing both players - and before the market has even opened - would represent good football decision-making.

And that's something which has been in short supply at Manchester United. Not always. But it has been a constant theme. And the culmination of these regular market mistakes is the state of the squad this season.

Things had to change. Positions. Methods. It's all fallen short in recent years. Perhaps in the week we saw stories of €100m in for Victor Osimhen. Talks underway with Sergej Milinkovic-Savic. And the resignation of Matt Judge... Perhaps this is the week when Manchester United fans see things finally change for the better.