We're just two months into the 2021/22 season, but already Manchester United look nowhere near Premier League title contention. Domestically, they are four games without a win. Knocked out of the League Cup at Old Trafford by West Ham, they have since lost to Aston Villa, drawn with Everton, and been hammered 4-2 by Leicester.

With four wins from eight games, United sit sixth in the table. After another big summer of spending, Ole Gunnar Solskjaer is under serious pressure. The results aren't good enough, but what are the tactical issues underlying them?

FRONT TWO NOT PRESSING TOGETHER

One of the recurring themes for Manchester United this season is that they have been far too easy to play through. They are struggling to keep clean sheets, and the defensive problems start at the front. Solskjaer usually picks a 4-2-3-1 system, with the attacking midfielder supporting the striker in pressing. But at the moment, these players aren't working together.

This issue was prevalent as early as the second Premier League fixture of the campaign, away to Southampton. Solskjaer started with a front two of Anthony Martial and Bruno Fernandes, but they didn't look organised as a unit. An example of this can be seen in the following sequence.

As Bruno goes to press the centre-back, Martial leaves his position too early and allows an angle for the pass through to the midfield. This allows James Ward-Prowse to get on the ball, play forward, and open up United.

Most teams that defend in this formation either have their attacking midfielder mark the opponent's base midfielder, or they have their front two work as a pairing to deny passing lanes and press the opponent's centre-backs. Manchester United don't have this basic level of organisation, and this was glaringly evident in the recent defeat to Leicester.

In the following images, we see Cristiano Ronaldo and Fernandes failing to affect the situation whatsoever. They aren't covering a midfielder, nor are they putting pressure on the centre-backs, and they aren't compact as a unit. Leicester have time to play out, and space to exploit. This puts extra responsibility on United's midfielders (Nemanja Matic here) to close down.

Not only do Manchester United's front two fail to work effectively in pressing, but there is a lack of organisation in midfield. Whoever Solskjaer picks in the centre, they are too easy to play through. This means the defensive four aren't getting proper protection from those in front, and are drawn out to close down threats, leaving themselves open at the back. It's the domino effect of poor pressing and shape.

Below, we see how slow United's midfielders are at re-organising after a failed press. There is no pressure on the ball, while Paul Pogba and Matic are not in position to block the ball through to James Maddison. Leicester can split the midfield and attack United's back four.

The same thing happened against Villarreal. Below, Pogba and Scott McTominay are too far apart. Again, there's no pressure on the ball, and they're easily split. Raphael Varane has to leave the back line to compensate, and Villarreal go on to exploit the extra space in United's defence to score. 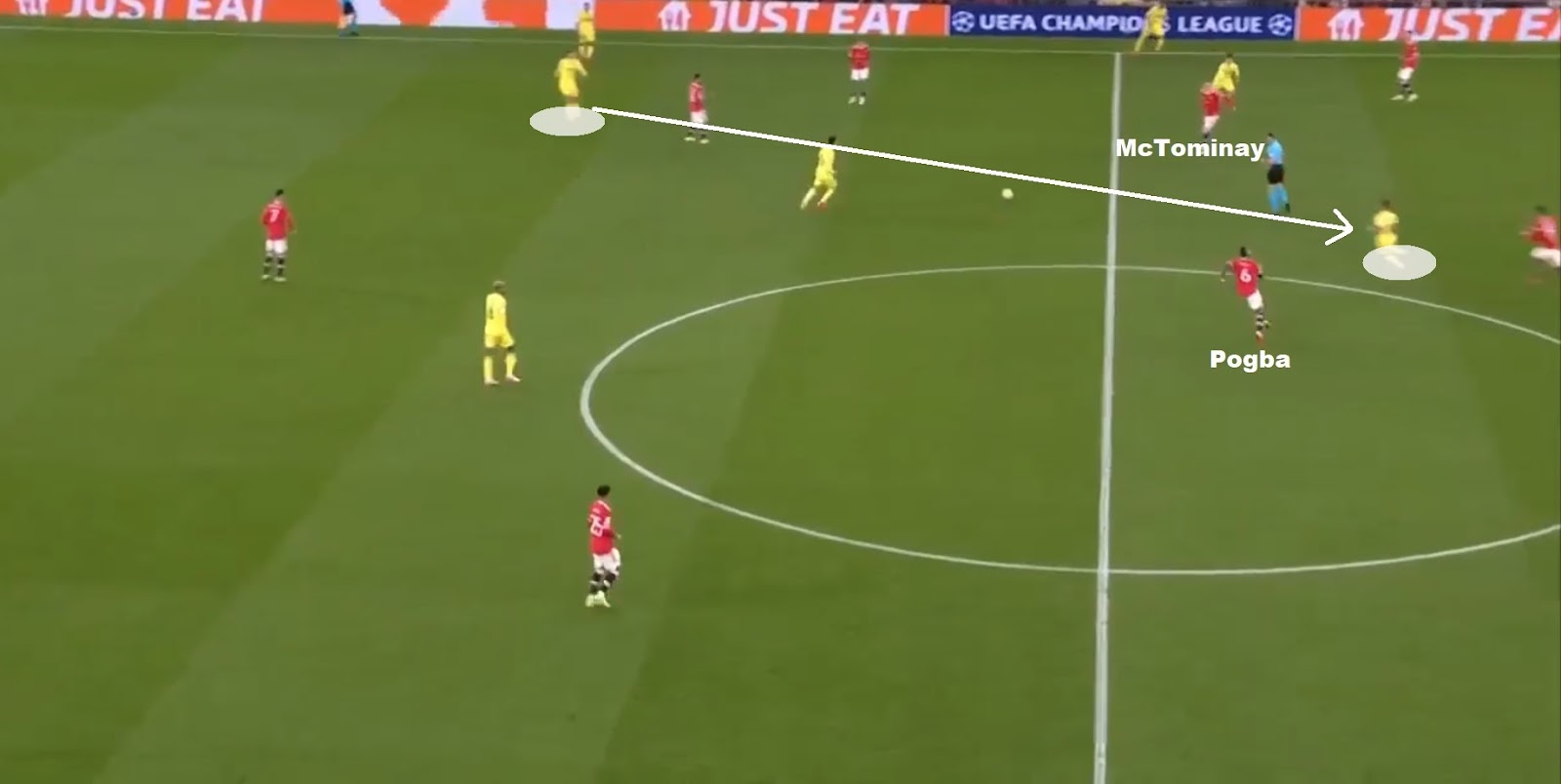 The biggest tactical problems for Solskjaer to solve are defensive, but his team's attacking has flaws too. There may be a lack of confidence right now due to form, which might explain why the tempo of passing has been so slow. United invited pressure upon themselves against Leicester because players took too long to release the ball and played a lot of under-hit passes.

Slow tempo passing led to the opponent's opening goal, as David De Gea played an under-hit pass out to Harry Maguire, who was robbed of the ball by Kelechi Iheanacho. The Leicester striker set up Youri Tielemans, who produced a wonder goal.

Low confidence and slow tempo may be temporary, but lack of options when building possession from the back is a theme that goes back years. Manchester United just don't have many players making themselves available in central areas, and the ones that do, such as Bruno Fernandes, don't always thrive under pressure with their back to goal.

United's poor attacking setup was evidenced in the draw at home to Everton. Here we see Fred on the ball, between the centre-backs. His midfield partner, McTominay, is so high up the field that he's out of shot. Fernandes is marked. Cavani is not showing for the ball. There is no availability between the lines from the midfielders or wingers. 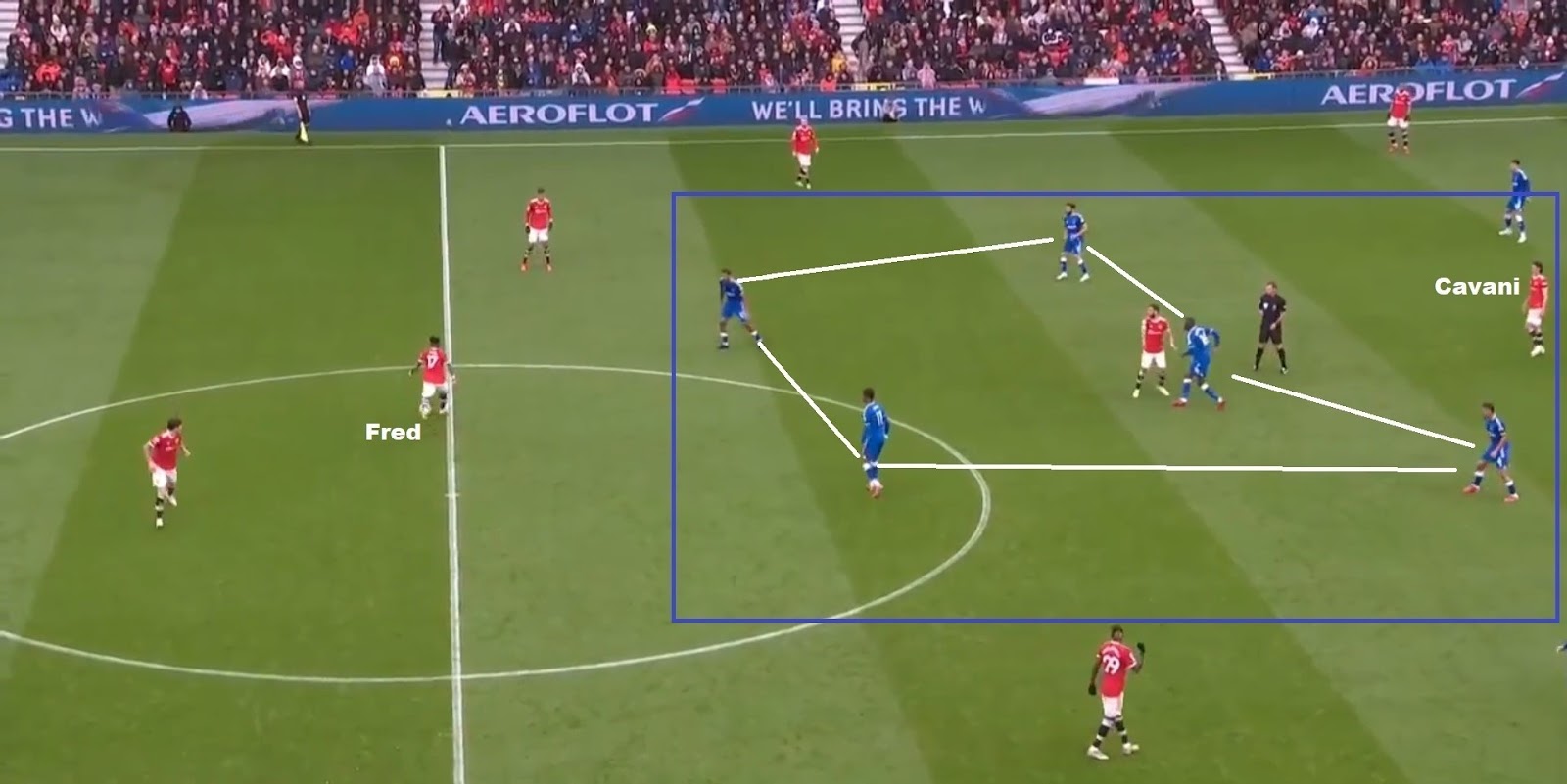 This setup leads to forced passes that are easy to intercept whenever Manchester United try to play through the lines. A lot of their progress comes through combinations out wide between the full-back, the nearest midfielder, and the winger.

Solskjaer's side are easy to force wide, and they lack ideas even when they get into the final third. Outside of a ball over the top for Fernandes, Greenwood or Rashford to run onto, or a high cross into the box for Ronaldo or Cavani, there isn't a lot of penetration.

It's possible that there are too many soloists for the attack to function as a whole. While United generate just over 17 shots per game (the third-highest in the league), only 5% of those come from inside the six-yard box. For context, Manchester City, Liverpool and Chelsea get between 10 and 12% of their shots from this area.

Manchester United's attack may lack the cohesion or speed of their peers, but they still have enough quality individuals to score goals. The big priority for Solskjaer right now is pressing and defending. His side have kept one clean sheet in eight Premier League games this term, and that needs to change.

There are, however, limited resources with which to produce something more solid. As wealthy as United are offensively, their only defensive midfield options are Matic, Fred and McTominay. None of the three have impressed consistently. In addition, dropping Ronaldo isn't a serious option, considering both his status and the fact the club just bought him. With Ronaldo up front, high pressing isn't a realistic scenario.

If Manchester United can't press high and they lack quality defensive midfield options to counter-balance the likes of Fernandes and Pogba, it may be time for Solskjaer to move away from the 4-2-3-1 system entirely. Like Thomas Tuchel has done with Chelsea, a back three may help to stem the flow of opposition attacks.

As for work rate and availability from the attacking players, it could be worth investing more time in Jesse Lingard and Donny van de Beek. They might help when it comes to showing for the ball and building a more coherent attacking approach, as well as helping cover for Ronaldo's lack of intensity in pressing.

All data is courtesy of WhoScored.com.