COMMENT: Eden Hazard knew this going in. Joining the biggest club in the world. The most demanding. The glare. The spotlight. It never burns as brightly - or harshly - as it does at Real Madrid.

Hazard knew all this when he pursued the move. At Chelsea he had it all. Not just a team, but a club built around him. To his needs. His habits. His personality. Everything was done with Eden in mind.

And to be fair, it brought the best out of him. Good trainer, but not great. Good teammate, but not always involved. Good leader, though not by example. It was enough for Chelsea. And the platform they offered was enough for Hazard to reach as far as he wanted in terms of fulfilling his potential.

But Real Madrid is something else. The day-to-day workings are scrutinised unlike any club in the game. Everything is pored over once, twice and then repeated. The scrutiny is not just intense, but exhausting. And it's an environment that has clearly taken Hazard aback - and with little sign of turning things around.

Just consider what Kris van Crombrugge, Belgium's team doctor, said of their captain in December: "They have high expectations in Madrid with him and Eden treats this externally in a playful and spontaneous way, but each person, and he too, is subject to a certain stress.

"That mental stress can translate to the muscles. And right now I think the muscle tension is a little higher right now, which makes Hazard now a player a little more prone to injury."

After the week he's just endured, what chance for Hazard of getting clear of all these injuries now?

From a Madridista perspective, the images were terrible. Awful. Hazard's laughter and smiles with his former Chelsea teammates barely minutes after a final whistle and elimination from the Champions League not the stuff of a Real Madrid leader. Indeed, not the stuff of Real Madrid player. As much as the backlash is being criticised in some quarters (and there is a good point to be made) amid claims of a smokescreen for the overall limp display over the two legs, he still did it. Hazard still showed remarkably poor judgment. If it had been Sergio Arribas or Miguel Gutierrez laughing and joking at the final whistle, the reaction back home would have been just as aggressive and venomous.

The problem for Hazard is that patience was already wearing thin before Stamford Bridge. He had arrived primarily to replace Cristiano Ronaldo. He'd taken his number. But the comparisons have been a disaster for the Belgian. 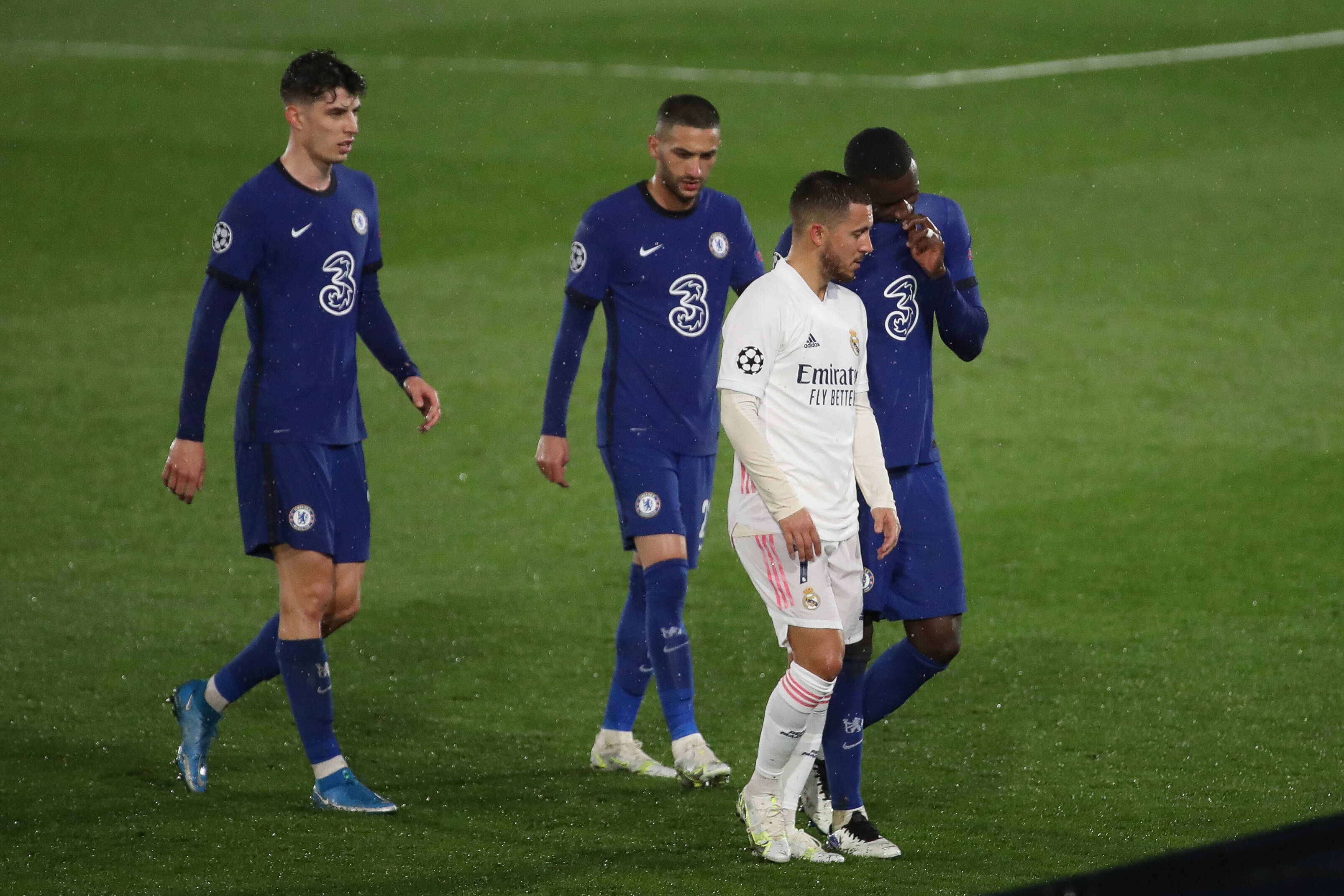 Hazard mixed with his former Chelsea teammates both home and away

As his old agent, John Vico, laments: "He should have gone a year before or later but never the year Ronaldo left. Passing after him is like scaling the Himalayas with bare hands."

Hazard is nothing like the now Juventus striker. In training. In leadership. In that absolute CR7 desire to draw every bit of potential God has give him. The pair are opposites. And it's something Hazard has failed to live with ever since his 2019 move.

It's what this column warned upon Hazard's arrival. And it's now something that has dawned upon the local media in Madrid.

In the aftermath of Stamford Bridge, Josep Pedrerol, of El Chiringuito fame, launched an attack on Real's No7 that has since gone worldwide. Close to Florentino Perez, the Real president, you can bet his reaction to Hazard's behaviour at the final whistle reflects much of the opinion inside the Santiago Bernabeu boardroom.

"The best players in the world come to Real Madrid, but only the most committed win," declared Pedrerol. "In Madrid, only those who leave their souls on the field, who live football 24 hours.

"Hazard has been missing for two years. 100 million (euros), injuries, problems with weight, more injuries ... Yesterday (Zinedine) Zidane gave Hazard an opportunity that he did not deserve.

"Hazard's laughter echoed in the hearts of all Madridistas.

"Hazard will never triumph in Madrid. Why? Because commitment is a word he does not know."

And that's it in nutshell. Not so much the criticism of Hazard from Pedrerol, but the comparison. When Pedrerol talks of "commitment". Of "living football 24 hours" a day. He's not talking about qualities, but personalities. He's talking about Ronaldo.

Hazard is no villain. And he's no mercenary. But he's also no Ronaldo. Again, Van Crombrugge: "Eden often says: 'I want to do everything possible for my fans, for (Belgium coach Roberto) Martínez, for (Real coach Zinedine) Zidane ...' He always wants to be ready to play, so he puts a little pressure on himself. This is not externally visible, but Hazard is just a person, a good person. Eden wants to get the best out of his body for everyone."

Hazard is a family man. He's committed to his career - without being obsessive. But at this stage in Real Madrid's history, post-Ronaldo, this isn't what the Madridista support were hoping for.

Hazard knew this going in. He knew he would be scrutinised relentlessly - unlike anything before. A bad judgment call suddenly becomes a career crisis. But he knew this, at least should've known it. The spotlight is never so harsh as it is at Real Madrid.