With Euro 2020 about to kick off, we at Tribal Football will be breaking down the runners and riders. We will analyse the tactics, key players and plot out each team's chances of success. Today we move onto the main contenders, beginning with Belgium, England and France.

With Eden Hazard's form and fitness in doubt, Lukaku and De Bruyne will be Belgium's star men going into this tournament. Lukaku arrives on the back of a scudetto-winning campaign at Inter, where he has averaged a goal every 1.5 Serie A games to re-cement himself as one of the world's best strikers. De Bruyne had a similarly successful season with Manchester City, hitting double figures from midfield and playing well in a variety of different positions.

Roberto Martinez lines his side up in a 3-4-3 that is designed to ensure defensive strength in numbers alongside options between the lines when they try to build possession. The front three plays narrow, with Lukaku supported by two of Hazard, Dries Mertens, Yannick Carrasco or De Bruyne. Martinez has the options to be flexible here and pick a front three to suit the game ahead. 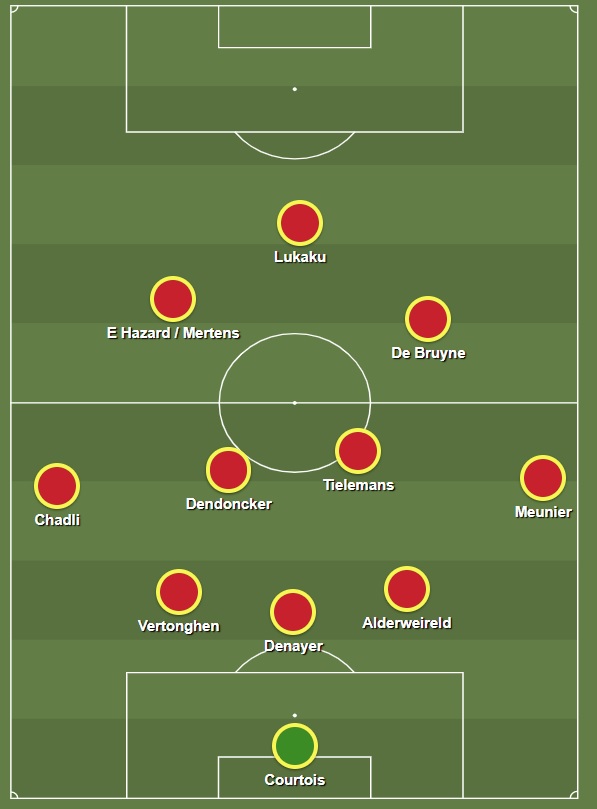 Belgium build patiently, using the back three to set up attacks, but they can hit Lukaku directly. The Inter man has the strength, control, speed and shooting ability to make a goal all by himself. De Bruyne is similar in that he can make something from nothing with a visionary pass or a shot from outside the box. A fully fit Hazard would be a bonus, but this team is full of goals without him: the last time Belgium failed to score came three years ago, in a pre-World Cup warm-up against an obstinate Portugal side.

One issue is depth of options, particularly in midfield. Marouane Fellaini and Moussa Dembele retired post-World Cup and Axel Witsel's fitness is uncertain. There are question marks around whether Youri Tielemans has adequate support, so injuries in this area could be devastating. Another weakness is pace in the back line. Toby Alderweireld and Jan Vertonghen play as outside backs either side of Jason Denayer, but neither is particularly quick. They could be exposed 1-versus-1 by quick wingers, particularly in transition.

This may be the last stand for a golden generation. The draw offers them hope, as they should top a group containing Russia, Denmark and Finland. That will give them momentum going into a second round clash with a third-place team. A potential quarter-final with Italy would be a real acid test of their title credentials. Can they finally win a major tournament? If not, it's all eyes on the next generation. But this one will be a tough act to follow.

While Tottenham struggled this season, Kane notched a career-best 37 goal involvements in 35 Premier League games, scoring 23 and setting up 14. He is now officially England's talisman, and his prowess in front of goal will be vital to the team's hopes of success this summer. His fellow Harry, Maguire, will be equally important at the other end of the pitch. Dominant in the air, the Manchester United centre-back is the most assured player in a vulnerable defence.

Gareth Southgate has plenty of attacking options, and will probably field a 4-3-3 to try and get the most out of them. Mason Mount will act as a go-between, linking midfield and attack, but Kane is the only certain starter in the front three. Phil Foden's superb end to the season could see him nab a wide spot, but Raheem Sterling, Marcus Rashford, Jadon Sancho and Jack Grealish all offer something different. 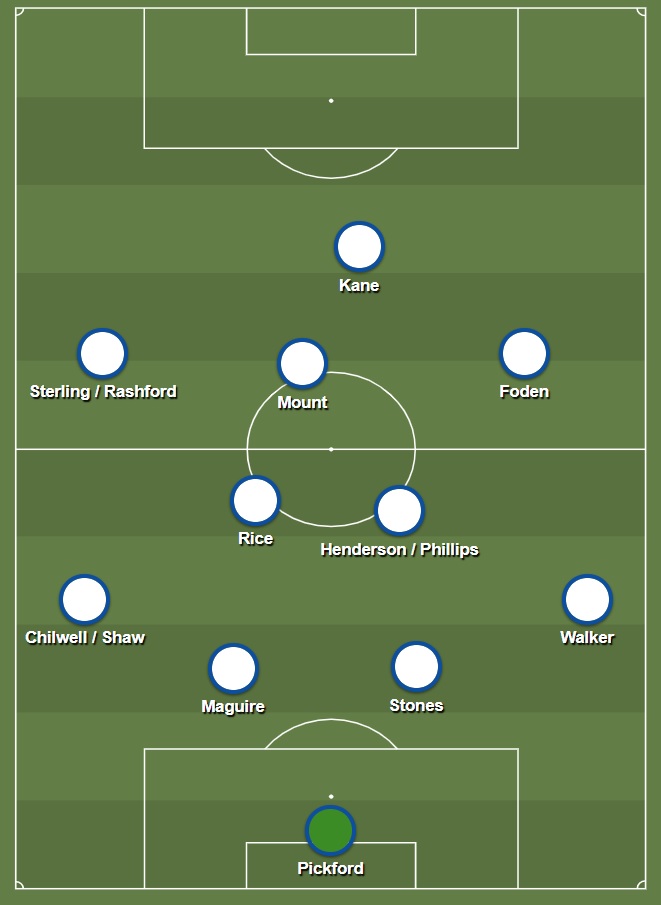 Moving away from the 3-5-2 that helped England to the 2018 World Cup semi-finals, where midfielders like Jesse Lingard and Dele Alli burst forward to support Kane, this is a more open, creative and attack-minded side. They have the potential to score against anyone, but Southgate will have to make sure there is a balance to the team.

There are glaring weak spots, one of which is the goalkeeper position: Jordan Pickford can induce panic coming off his line, and he isn't necessarily well-protected. For all Maguire's strengths, he is slow on the turn, while his centre-back partner John Stones is prone to lapses in concentration. The fitness of Jordan Henderson will be key, as his experience could help to marshall a new-look midfield and give that defence the screening it requires.

It's difficult to assess where this England team will end up. They should top Group D, but that would almost certainly mean a second round clash with France, Germany or Portugal. All three are among the tournament favourites, and have the attacking arsenal to exploit defensive vulnerabilities. Expectations are high, and England don't always deal well with them. With tough opponents coming quicker than usual, a shock early exit could be on the cards.

Kante vanquished any doubts about his level this season, helping Chelsea to a Champions League win. At 30 years of age, he remains as energetic as ever, going from box to box, breaking things up and making clever runs from midfield. He will likely play a more restrained, sitting role for France, letting the talent ahead of him do the creating and scoring. Mbappe is the cream of that attacking crop, though Antoine Griezmann, Paul Pogba and a returning Karim Benzema might argue otherwise.

Didier Deschamps led France to 2018 World Cup glory with a lop-sided 4-4-2 that saw Mbappe pushed up on the right wing while Blaise Matuidi played more defensively on the left. That dynamic looked set to continue with Adrien Rabiot taking Matuidi's place, but the return of Benzema could force Deschamps into a late re-think. In the recent friendly win over Wales, he went with a midfield diamond, with Griezmann behind Mbappe and Benzema. 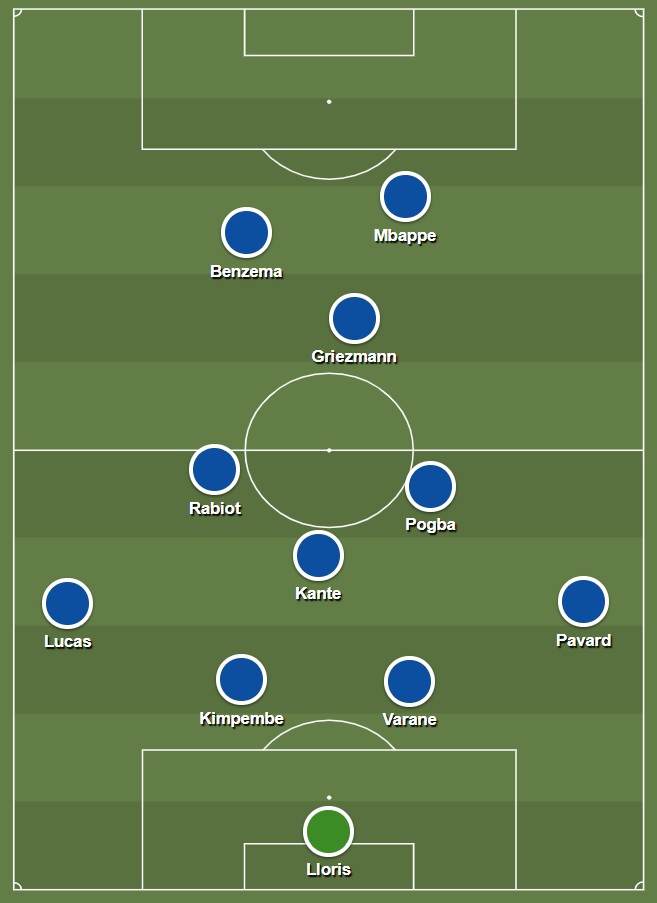 The 4-4-2 with a diamond midfield could well be France's starting formation at the Euros, and it allows for an even more fluid, multifaceted frontline than the one that won the World Cup. And even if it doesn't work, they still have the option to re-introduce Olivier Giroud and play more directly around a central focal point.

No team at this tournament has more individual quality than France. Kante is arguably the finest defensive midfielder in the world, Mbappe and Benzema are among the top strikers, Lucas Hernandez is one of the best left-backs, and Raphael Varane is in the same bracket at centre-back. There is a good mix of flair and solidity. The only question mark is over goalkeeper Hugo Lloris, who has not been in top form for Tottenham.

France's toughest test, as remarkable as it sounds, might be getting out of the group. They are up against Germany, Portugal and a Hungary side that will enjoy home advantage when they meet. Assuming they get through in decent form, the knockout stages - and potential clashes with England or the Netherlands - won't look so daunting. Not only does this team have the quality, but they know how to win a major tournament. They're favourites to win another one this summer.