Erling Haaland and Man City: Why Pep's tactical change more precarious than most are presuming

Most managers who had won four league titles in five years would opt for continuity over the summer, or at the very most a few minor tweaks; a topping up of the talent pool to ensure they remain in control of the domestic setup. Pep Guardiola is not 'most managers'. He is a restless innovator, believing in his own ideas but also deeply anxious about where the game is heading. It is a blessing and a curse, no doubt, and it has made this summer the most interesting since his arrival in England.

Manchester City ought to be in an obvious position of strength. After winning the Premier League title last season with 94 points they have added the best young striker in the world at the bargain price of £64 million. Most observers see this as an easy equation and a guarantee of further success, but there is reason to believe Guardiola's incessant thirst for progress will prove to have destabilised the team on this occasion. At the very least, the signing of Erling Haaland has dramatically altered the tactical principles that have underpinned Man City's successes over the last five years.

The Community Shield was an ominous sign of the teething problems we may see, including a slow start that could give Liverpool an unassailable advantage in the title race. Haaland looked lost, disconnected from his team-mates as he made runs on the shoulder of the last defender whenever Man City's midfielders wanted him to come short. He had a meagre 16 touches and completed seven passes. He caused Kevin de Bruyne to twice throw his arms into the air in frustration, wondering why Haaland had sprinted full pelt away from him. 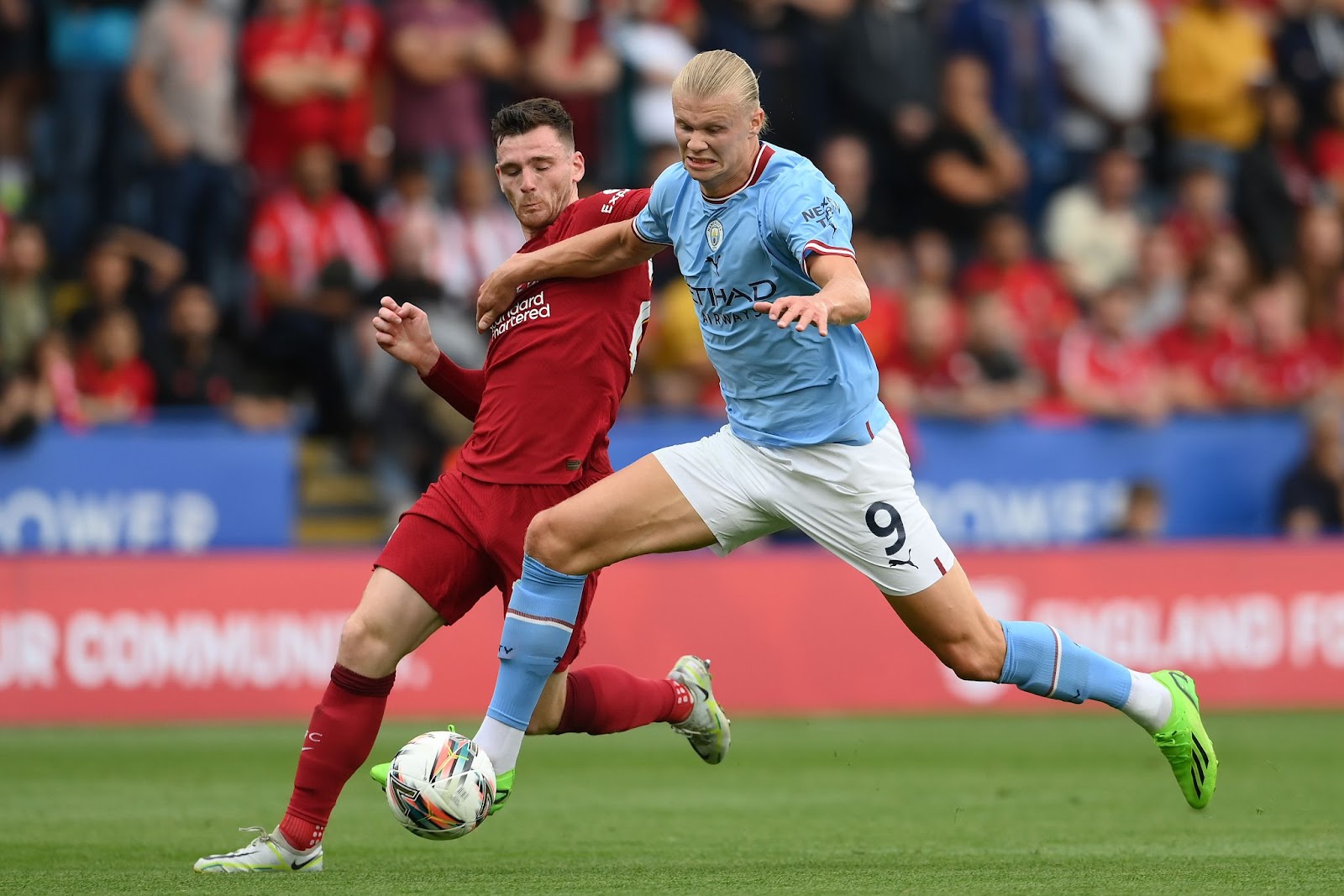 Man City will have to adapt to Haaland and Haaland will have to adapt to Man City. This is a team obsessed with possession recycling and the measured control of matches now led by a player of transitional speed and verticality; a penalty-box poacher in a team that has always wanted a false nine. There is no guarantee of success here, not in the short-term at least. It is possible Haaland's movement will see City moves break down and become disjointed – and he is arguably an even worse fit from a defensive standpoint.

Haaland ranks in the 27th percentile for pressures when compared to all forwards in the top five leagues over the past 365 days, per FBRef. He won't press like a Guardiola player should, and without the counter-press Man City could face further problems as opponents are given time to get their head up and counter-attack, picking a long ball over the top of the high defensive line. It is a problem potentially exacerbated by Guardiola's most surprising decision this summer: allowing Raheem Sterling to join rivals Chelsea.

Riyad Mahrez and Jack Grealish are considerably weaker than Sterling defensively, hitting pressure, tackling, and interception numbers well below the average for a Premier League winger. When combining with Haaland they could create a forward line incapable of leading the press, creating serious problems for the defending champions. 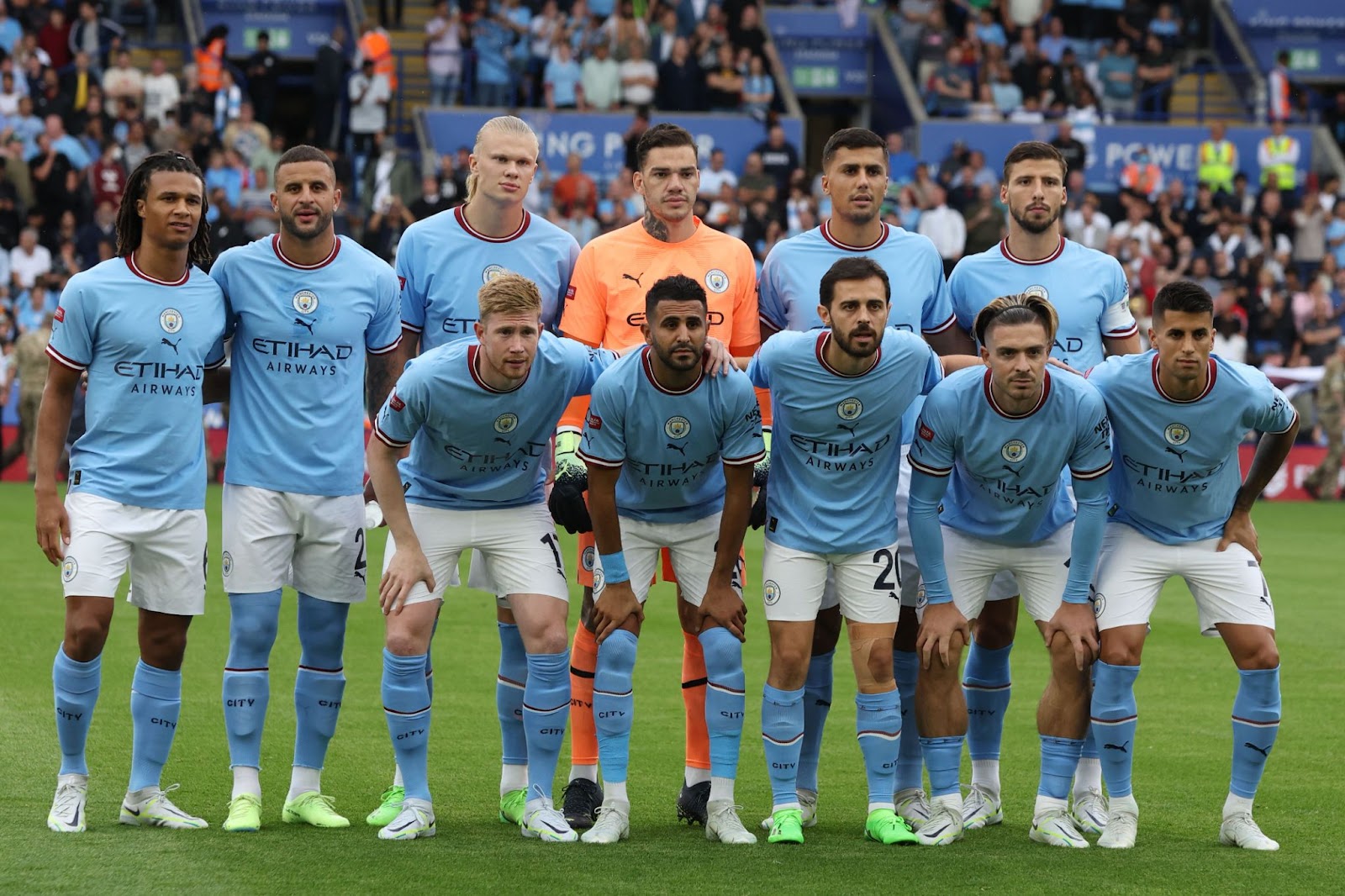 But that is just one side of the story, of course. Guardiola loses Sterling's relentless buzzing energy on the left and his poacher's instinct, and yet he most likely gains a new partnership as Grealish features more regularly in support of Haaland. Grealish, if his confidence returns, can be one of the best players in the world and his pure creativity from that side will move up a notch with a striker like Haaland making intelligent runs. It did not help Grealish that City player without a centre-forward last year, and he could develop an exceptional partnership with Haaland.

It is worth noting that Guardiola did not want to deploy a striker-less system last season but acted out of necessity after his summer-long pursuit of Harry Kane was fruitless. In fact, Guardiola may actively want to recalibrate his team's attacking tactics and build a more direct, straight-lined approach through Haaland. Last season Man City were often slowed down by deep-lying opponents such as Crystal Palace and Southampton, but with Haaland's runs there will be opportunities this year to get in behind before defensive teams have a chance to retreat into their shell.

Plus there is that simpler equation, the one in which Haaland's 86 goals in 89 games for Borussia Dortmund shows he will score ruthlessly when the ball drops to him in the area – which it is bound to do given Man City's quality in all areas. Even a poor performance in the Community Shield yielded three decent chances. Nobody creates more than Man City and nobody attempts more crosses either. Haaland's movement should lead to goals even if City's build-up play is a little more chaotic.

Nevertheless it is a more precarious situation than most are presuming. Man City could well be more vulnerable, on and off the ball, while Haaland and his team-mates adapt to each other. West Ham United will be quietly confident of getting off to a strong start on Sunday.