No matter how often we are proved wrong, we are always quick to write off new signings if they cannot immediately adapt to the Premier League. There are countless examples of footballers who ghost about the field for a year or so, only to eventually settle and come to life… and yet when the next supposed superstar fails to hit the ground running we cast them aside.

At Chelsea, this has happened to two of their new signings, Timo Werner and Kai Havertz, with few people giving them the benefit of the doubt or acknowledging just how disruptive and impactful it must have been to move countries in the middle of a pandemic. But finally we are seeing flickers of life from both players, and while this is partly because time has helped them settle (or in Havertz's case, overcome Covid-19) their adaptation is also thanks to the new manager understanding their roles.

Frank Lampard got Havertz completely wrong, playing him in an ill-fitting number eight role that required the youngster to occupy midfield spaces, and track back, in a way he has never, ever been asked before. In the complex tactical landscape of the modern game, to expect a highly-specified forward like Havertz to drop into midfield is about as strange as asking Ben Chilwell to play the Makelele role.

By contrast, Tuchel is using Havertz in the same role – and, broadly speaking, the same tactical system – as he enjoyed at Bayer Leverkusen. In the 2-0 win over Everton Havertz created both of the hosts' goals with his subtle darting movements off the front line, dropping cleverly into the half-spaces to create room for others as well as making intelligent runs in behind.

His runs pulled the pitch open for others, unclogging the final third at a time when Tuchel's possession-centric 3-4-2-1 had started to look a little bit stale and unpredictable. Havertz's long-term future lies in this position. 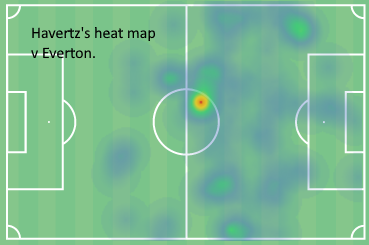 Ole Gunnar Solskjaer has a fantastic eye for games like these, regularly outwitting Pep Guardiola in the tactical battle, and by and large Saturday's match followed the pattern of their recent meetings: Manchester United sat back for long periods, nullifying Manchester City's possession, before playing a direct game to get their quick forwards going on the counter-attack.

However, there was one crucial difference this time. Fred and Scott McTominay nominally started in their usual roles in a 4-2-3-1 but the two central midfielders were actually unusually stretched, leaving a big gap between them (that was covered by the front three) in order to directly shut down the half-spaces. Solskjaer was aware that Guardiola's playmakers all like to operate in this particular channel and simply closed it down, bravely leaving space in the middle to do so.

He was helped by a City team selection that did them no favours. Guardiola's side have been at their best recently when deploying a false nine and ensuring both wingers hug the touchlines, but instead they were too narrow on Saturday with Gabriel Jesus and Raheem Sterling on the pitch. Things improved when Kyle Walker came on for Joao Cancelo to give City some width on the right, but they were 2-0 down at this point and it was all too late. 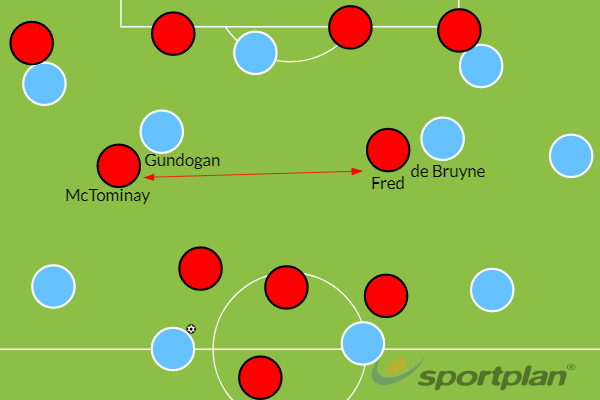 Most visitors to Anfield, even within Liverpool's appalling recent run, will sit back and look to absorb pressure before hitting them on the counter-attack. There is a good reason for that: Liverpool's forwards look exhausted, and are therefore creatively stumped by a deep shell, and once Jurgen Klopp's side are drawn forward there is extra space for long balls over the top.

But Fulham bucked the trend. Scott Parker attacked from the off, pushing high, pressing hard, and playing quick two-touch football through midfield to take advantage of the psychological vulnerability infecting the Anfield dressing room. Consequently Liverpool were outplayed in the first half and were lucky to only be one goal down at the break.

The winner, scored by Mario Lemina, was the reward for Parker's courageous tactics; the midfielder stole the ball from Mohamed Salah on the edge of the box, symbolising how their progressive and energetic response had made Liverpool even more timid than usual. 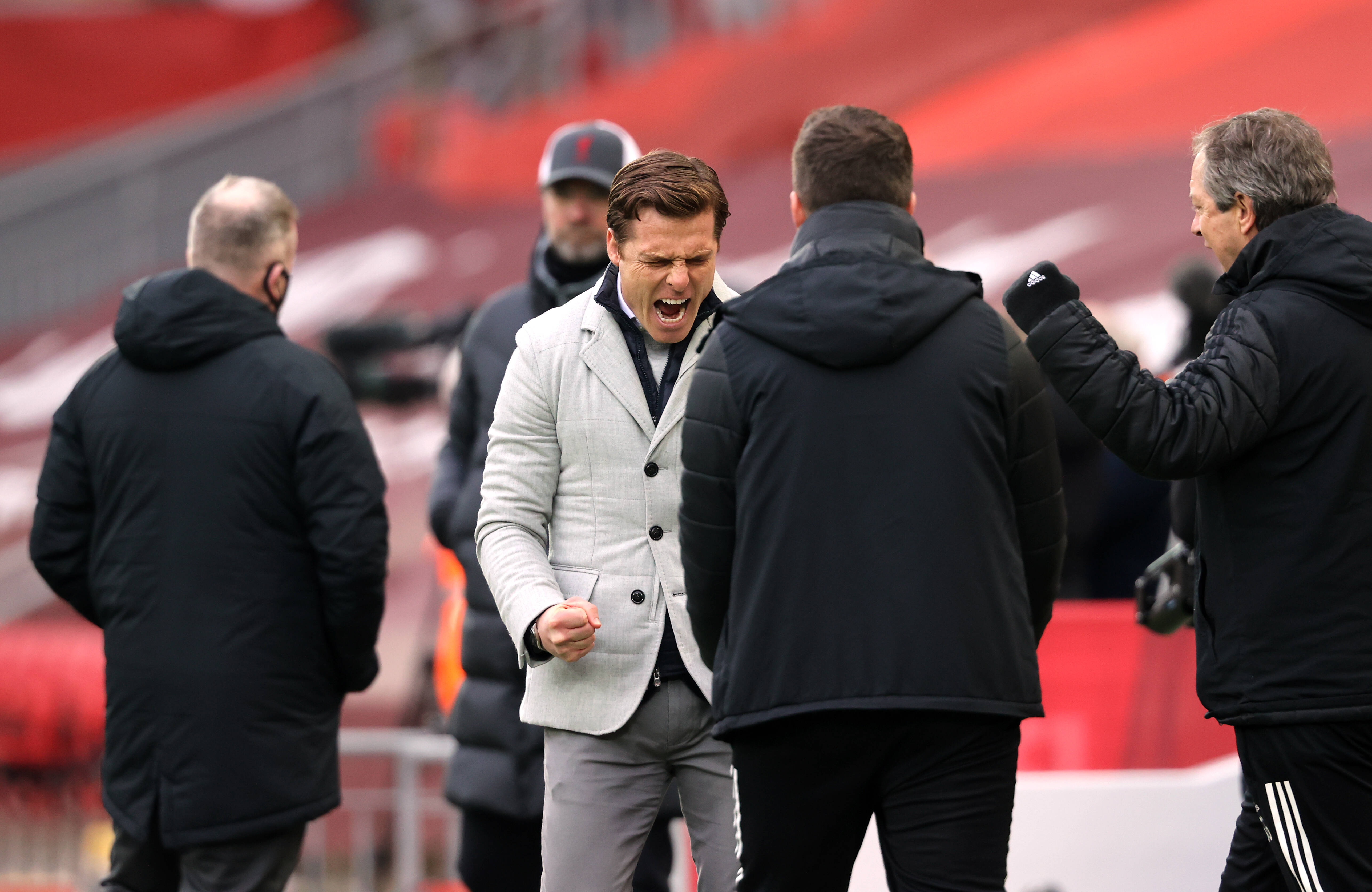 Perhaps it is unfair not to credit Joe Mourinho for the upturn in Tottenham Hotspur's form, but then again having seen them improvise their attacking lines all season, drifting from good form to poor depending on the confidence levels of the players, it seems likely their 4-1 win over Crystal Palace was simply a continuation of individualism reigning at Spurs.

Gareth Bale has finally come good and has been a joy to watch of late. Again, he was the inspiration for the victory that puts Spurs within five points of the Champions League places, and it wasn't just his goals that made the difference. The Welshman is dropping intelligently between the lines to get on the ball, offering the Tottenham midfielders a passing option through the lines that had been notably absent before.

Bale, alleviating creative pressure from Kane, then turns and drives at the heart of the defence, disrupting the defensive lines and causing enough chaos for Kane and Heung-Min Son to then be brought into the game. If there is a set pattern for which Mourinho is responsible, then perhaps it is the frequency with which Bale comes short, draws defenders to the right, and then switches the play out to Son. Where previously Son was denied space by wary opponents, now Spurs have a threat on both flanks, pulling the defence in all directions. 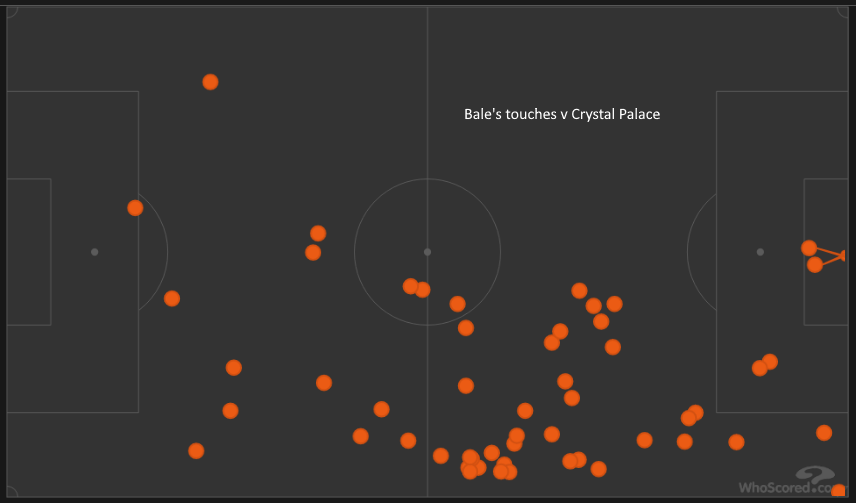 There were a lot of interesting results and fascinating headlines from this round of Premier League action but it was hardly the most thrilling football to watch. Before Tottenham's 4-1 win over Palace on Sunday evening we had witnessed 16 goals in the last 13 games – a slog that proved beyond doubt the players desperately need a break from this exhausting season.

Hopefully most clubs will refuse to let their players go on international duty, giving the chance for a rest and some time on the training field – and giving us back some more tactically interesting football; players cannot respond to their coach's detailed instructions if they are too tired to listen or move.

It is telling that the weekend's best performances came from the freshest legs. Bale (five starts this season), Lemina (11 starts), Jesse Lingard (six starts), and Havertz (13 starts) were the stars.