Understandably, this was one of the nerviest meetings between these two teams we've seen. With so much on the line, hesitancy regularly reigned in a match defined by slow football injected with sudden bursts of attack, as both defences sat off the press while retaining their respective high lines; a holding pattern that would suddenly collapse into chaos.

The most interesting tactical element was how Pep Guardiola instructed his players to play a much more direct game, hitting longer passes over the top of the Liverpool defence in search of runners from deep – with Raheem Sterling and Gabriel Jesus the best at this. It was textbook Jurgen Klopp. Manchester City could have been out of sight in the first half before eventually one of these balls, from Joao Cancelo, led to Gabriel Jesus's goal.

City's first had been the result of Liverpool looking too rigid, nerves slowing them down as a panicked clearance, then a foul, led to Guardiola's team scoring via a quick freekick. However, Klopp's side woke up thanks to Thiago Alcantara managing to gain control, his expert passing and coolness under pressure making up for a pretty dreadful performance from Fabinho. Thiago's world-class pass set Liverpool away for their first equaliser and helped ensure this was, ultimately, a fairly even game. 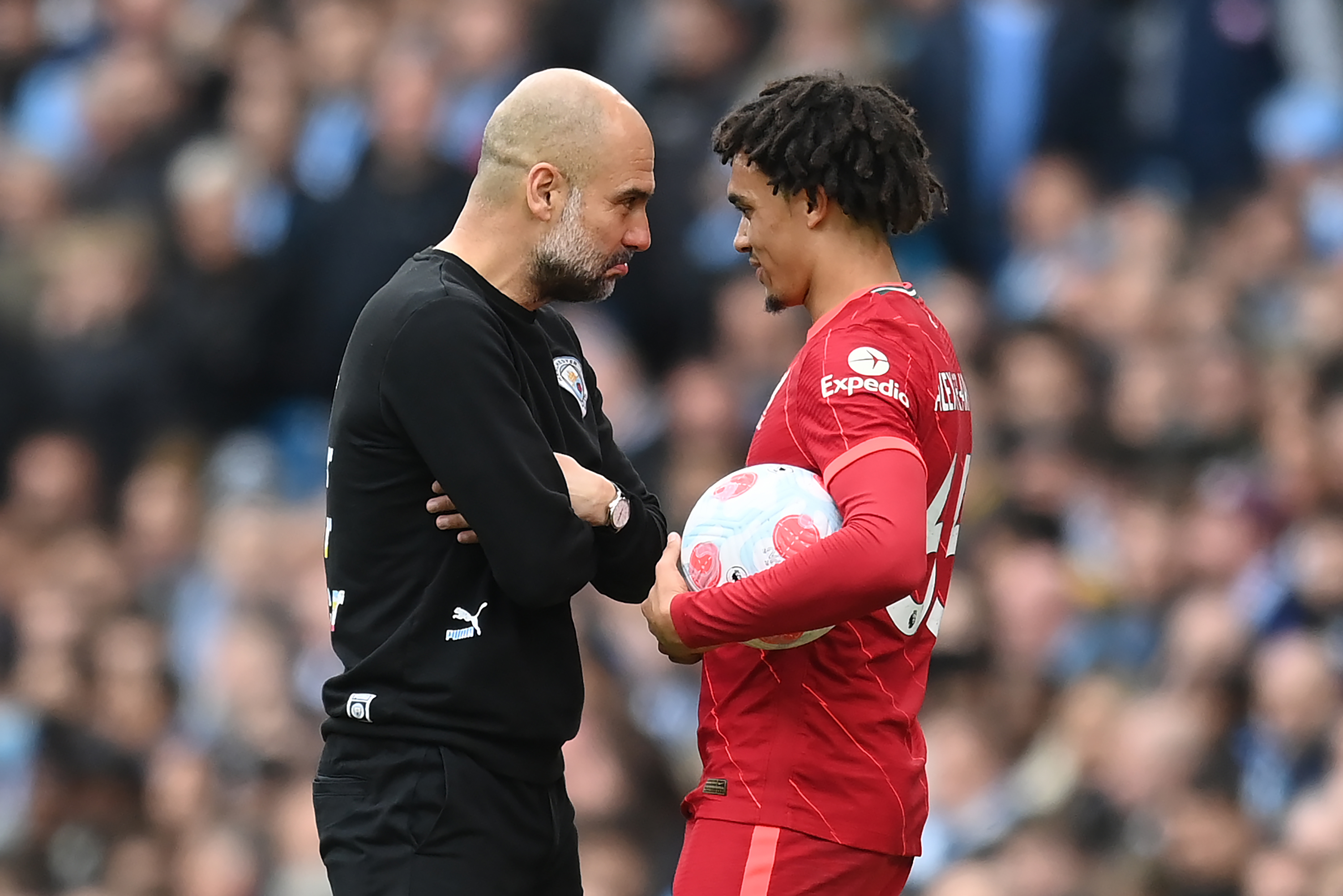 For the second game in a row, Tottenham Hotspur looked poor in the first half as their slow build-up play out from the back was swarmed by an opponent's high press, leaving Antonio Conte's low block looking just too deep to give his team any attacking threat. For the second game in a row, Conte told his players at half-time to play a far more direct game, launching long balls forward to bypass that press and get Spurs into the final third.

What was most striking in the 4-0 win over Aston Villa was how Harry Kane was consistently hit with a forward pass by the Spurs defenders, with the number ten dropping nicely to play a first-time pass on to Hueng-Min Son or Dejan Kulusevski. The two wide forwards made diagonal runs towards the centre of the pitch and were found time and time again by Kane; Conte's work on this partnership is bearing fruit, with an almost telepathic understanding developing due to the detailed tactical training.

But Spurs will not make top four this season, or build on that over the coming years, unless they can follow Conte's instructions for a full 90 minutes. Poor finishing was the only reason Villa were not two or three goals up at the break; Conte knows he needs better players in his back five for the system to work long-term. 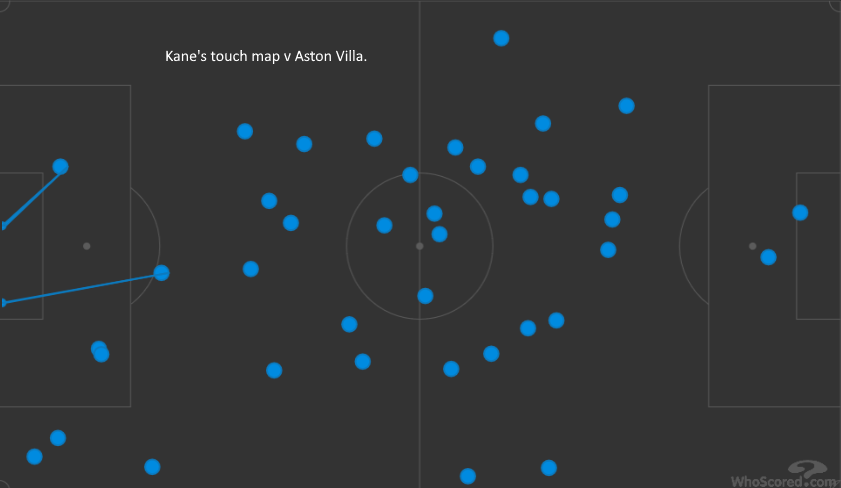 Timo Werner put in his best performance in a Chelsea shirt, and while it felt like a caricature of the man that he hit both posts and the bar, Werner's excellent movement and dribbling shows he can be the direct forward Thomas Tuchel has always wanted, especially with Mason Mount in such brilliant form behind him. It points to a successful future that does not require Romelu Lukaku coming good.

Mount has been up and down this season, his talents sometimes getting lost due to the fact he is usually locked out to one side as one of Tuchel's dual number tens in a 3-4-2-1. Chelsea's switch to 3-4-1-2 for this game helped the England international roam across the width of the pitch, coming into his own and enjoying working with Werner's exceptional runs; few players have the acceleration or positional intelligence of the German, and even if his finishing does not improve he ought to be utilised more often by Tuchel.

Werner makes things happen, and injects an energy into Chelsea's attacking play that nobody – certainly not Lukaku – can match.

Graham Potter's Brighton deserved their win. His 3-5-2 formation was subtly different from versions gone before, presumably in order to take advantage of the growing injury list at Arsenal; Mikel Arteta had to play Granit Xhaka at left-back and Albert Lokonga, only just back from injury, in left central midfield. That meant there was a clear weak point – the right half-space - for Brighton to target.

This explains why Enock Mwepo was so impressive, grabbing a goal and an assist by playing halfway between a right-sided central midfielder and a right wing-back. He consistently made bursting runs in between where Lokonga and Xhaka were sat, happy to either overlap down the flank or control the tempo of the contest from a more central position.

Arriving late in the move Mwepo was largely unseen, allowing him to contribute the two most important moments of the match. 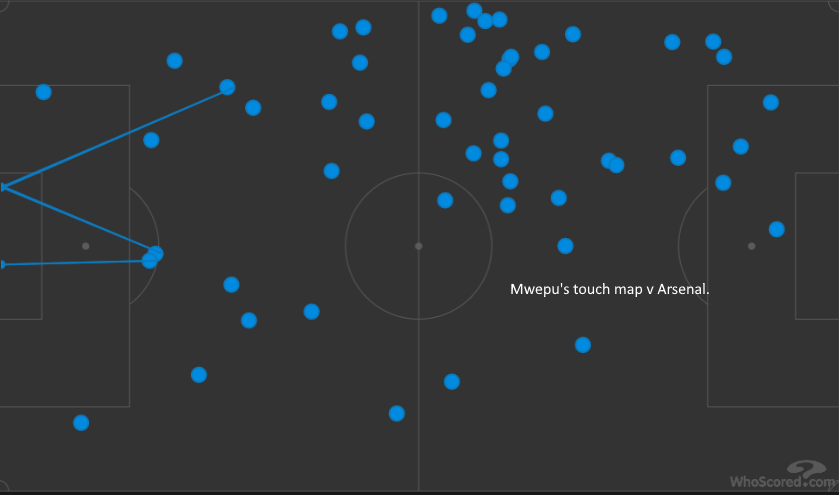 Frank Lampard has struggled as a manager when trying to play on the front foot. The consistency of this issue – being far too open and vulnerable when trying to attack with a high line; being suddenly more coherent when forced into a deep shell – is becoming rather embarrassing, because it really does seem as though Lampard does not realise how he should adapt his tactics.

Manchester United were awful, yet again, and clearly the players have given up on trying to listen to Ralf Rangnick's instructions. They are even more disordered, even less energetic, than they were under Ole Gunnar Solskjaer and that means they can be completely nullified by a deep block. Everton were forced back by United's possession, holding just 33% of the ball.

It was Everton's third good performance under Lampard, after a 1-0 win over Newcastle in which they held 40% possession and an unfortunate 1-0 defeat to Man City in which they held 31%. Lampard does not have the ability to coach an expansive and adventurous system. If Everton are to survive, he needs to accept that backs-to-the-wall defensive caution is the only way to go.