Cristiano Ronaldo presses less than any striker in the Prem, Claudio Ranieri is already confusing Watford and Steve Bruce has no authority at Newcastle - here are five lessons we've learned from the weekend's Premier League round:

Ole Gunnar Solskjaer's team have always been unstructured, unable to play with any clear pattern when in possession and instead reliant on individual moments of quality to win matches. It is why they will not win major honours while he is in charge, but until now his ability to organise a defence when tasked with sitting back has kept him in a job. When defending deep, they pull out big results right on the brink of crisis.

Not anymore. Cristiano Ronaldo's arrival has badly disrupted their defensive shape and the 4-2 defeat to Leicester City was the starkest example yet. Ronaldo has made the fewest pressures in the Premier League this season among forwards to have played at least three games, and the figure is nearing three times lower than the player second bottom in the table. He does not press and does not cut off the passing lanes into midfield.

This is a major issue and on Saturday Youri Tielemans was able to get on the ball, then play a vertical pass into dangerous areas, far too easily. United are bad at pressing at the best of times – decompressing as they go in ones and two, with no instructions from the dugout – but with Ronaldo at the front it is catastrophic. His presence has damaged the balance of the team, not least in shunting Mason Greenwood out wide, Paul Pogba deeper in midfield, and Marcus Rashford or Edinson Cavani to the bench.

Solskjaer, then, is unlikely to get good results over the coming weeks. United's counter-attacking strategy won't work with Ronaldo failing to do any defensive work, meaning they will likely lose to Liverpool and Manchester City in their next two. After floating in limbo for so long, Solskjaer's tenure is about to finally reach crisis point. 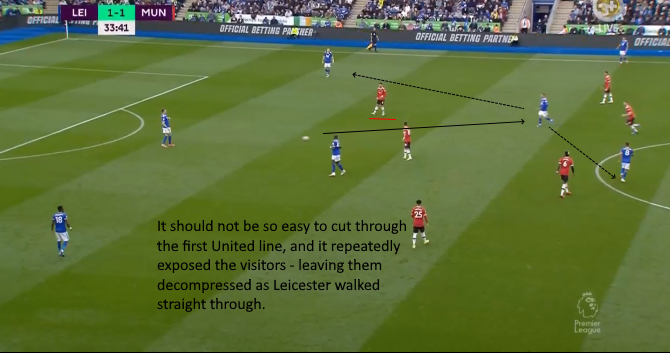 Xisco had been attempting to play a deep-lying counter-attacking system at Watford, in which the ball is played quickly out to wingers Emmanuel Dennis and Ismaili Sarr to break down the flanks. Claudio Ranieri's appointment seemed a savvy one, then, since the Italian generally likes to play in this tactical strategy.

So it was very strange to see Ranieri experiment so much for his first Premier League game in charge. He lined Watford up in a back five, and unsurprisingly they looked very uncomfortable in a setup they had not used this season. Worse still, Watford weren't anywhere compact enough, holding a too-high line that led directly to Sadio Mane's opening goal.

Ranieri also put Sarr through the middle, inexplicable not only because he had been performing well from the right but because he was a star player in Watford's 3-0 win against Liverpool in 2019 – when the Hornets, you guessed it, countered quickly down the wings. It's worth remembering Xisco hadn't done much wrong and Watford looked fairly secure before his sacking. Why on earth did Ranieri change so much?

It is hard to pinpoint the details of what went wrong tactically for Newcastle in this game, but it's worth noting that when motivation is low, players are unlikely to follow instructions. Steve Bruce's authority has been fatally undermined while the players will know they are no longer wanted by the new owners, and unsurprisingly this has simply exacerbated their on-field issues.

Throughout the game Newcastle were unable to get close to Spurs, rarely closing players down or showing any fight in open play; it was far too easy for Sergio Reguilon and Pierre-Emile Hojbjerg to assist for the first two Tottenham goals. Newcastle, attempting a higher line this year, are stuck between two systems – failing to press properly or compress space by sitting deep. In other words, they are hopelessly open and low on quality. 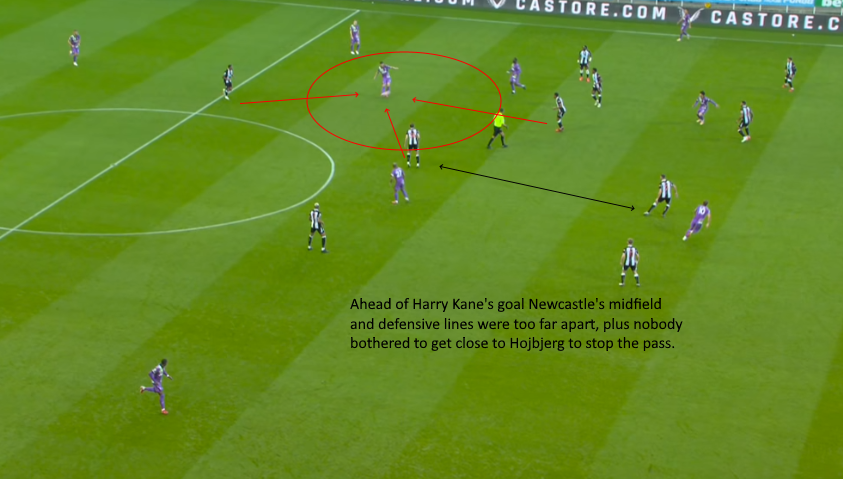 Even at 2-0 up, Aston Villa hadn't looked particularly convincing. Without Jack Grealish to break the lines from the left and give the team a sense of structure and purpose, we are starting to see that Dean Smith – despite doing an outstanding job at Villa – doesn't quite have the tactical detail required to give purpose and order to the team's build-up play.

They drift about the pitch too much, and things are exacerbated by the use of a 3-5-2 formation that has too few players operating between the lines. On Saturday, Emiliano Buendia slipped into the the number ten space intelligently, and yet he couldn't do much because Ollie Watkins and Danny Ings were static – failing to work together, make runs in behind, or drop short to help Villa build.

Villa need to move back to 4-2-3-1. There is no need to have three centre-backs on the pitch and no real value in Ings and Watkins playing together.

After a sharp first 15 minutes Arsenal withdrew into themselves again, although Crystal Palace deserve great credit for their hard-pressing midfield swarming the hosts and causing all sorts of problems. They are led by the brilliant Conor Gallagher, who completed four tackles in midfield and led by example with an energetic performance that saw Palace target an overworked Thomas Partey.

Crystal Palace rank fourth in the league for pressures, while only Southampton and Leicester apply more in the central third of the pitch, per FBRef. This was in full force at the Emirates as the visitors completed 22 tackles, their most in a single game this season. Patrick Vieira's side deserved to win, and despite winning just eight points from their first eight games it is likely Palace will finish in the top ten. 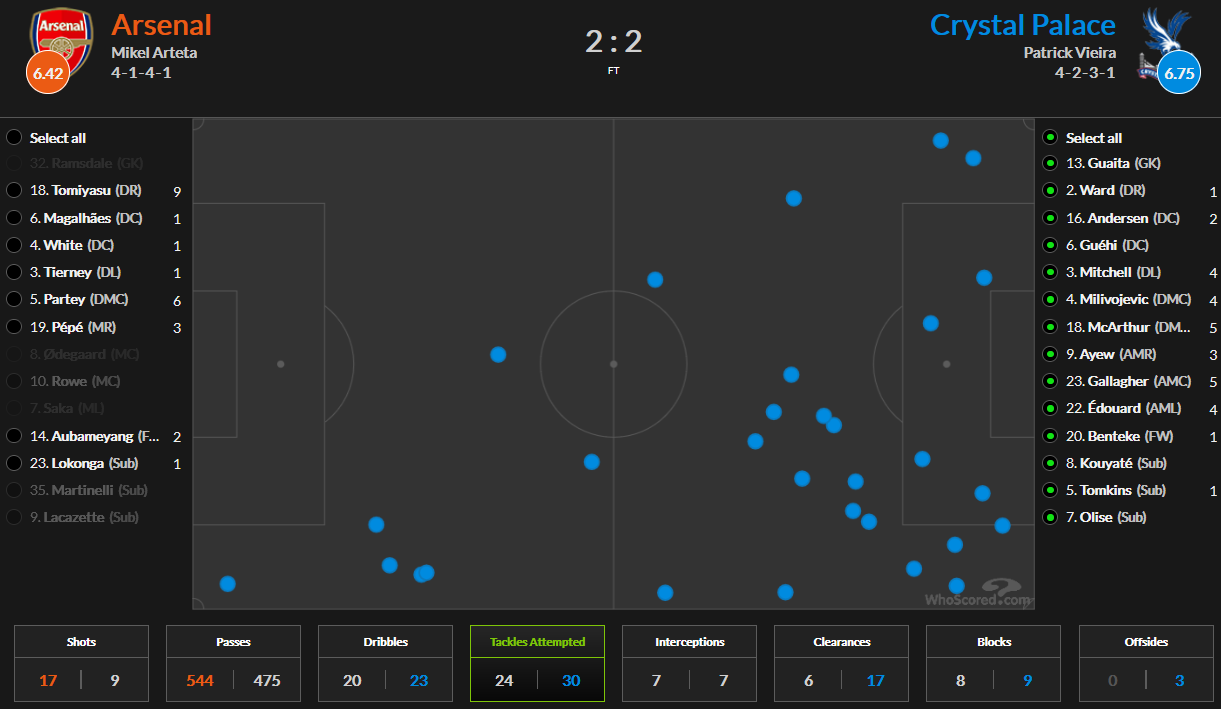