Winning the European Championship was a masterclass, there is no doubt about it and no one will ever be able to take that trophy away from Roberto Mancini, that joy and the merits for a journey that will rightly remain in the history of football…

What happened later, however, and therefore the failure to qualify for the World Cup in Qatar, the second consecutive time for Italy, can only see the Italian national coach as the man responsible.

The victory of the European Championship remains and this flop does not cancel anything, but the defeat against North Macedonia is an unacceptable stain on the history of Italian football and the worst thing is that it was absolutely avoidable.

Going out against Portugal would still have been disappointing, but it would have been more understandable than a 1-0 loss at home, in front of a stadium that was finally 100% full, after years of restrictions for covid. 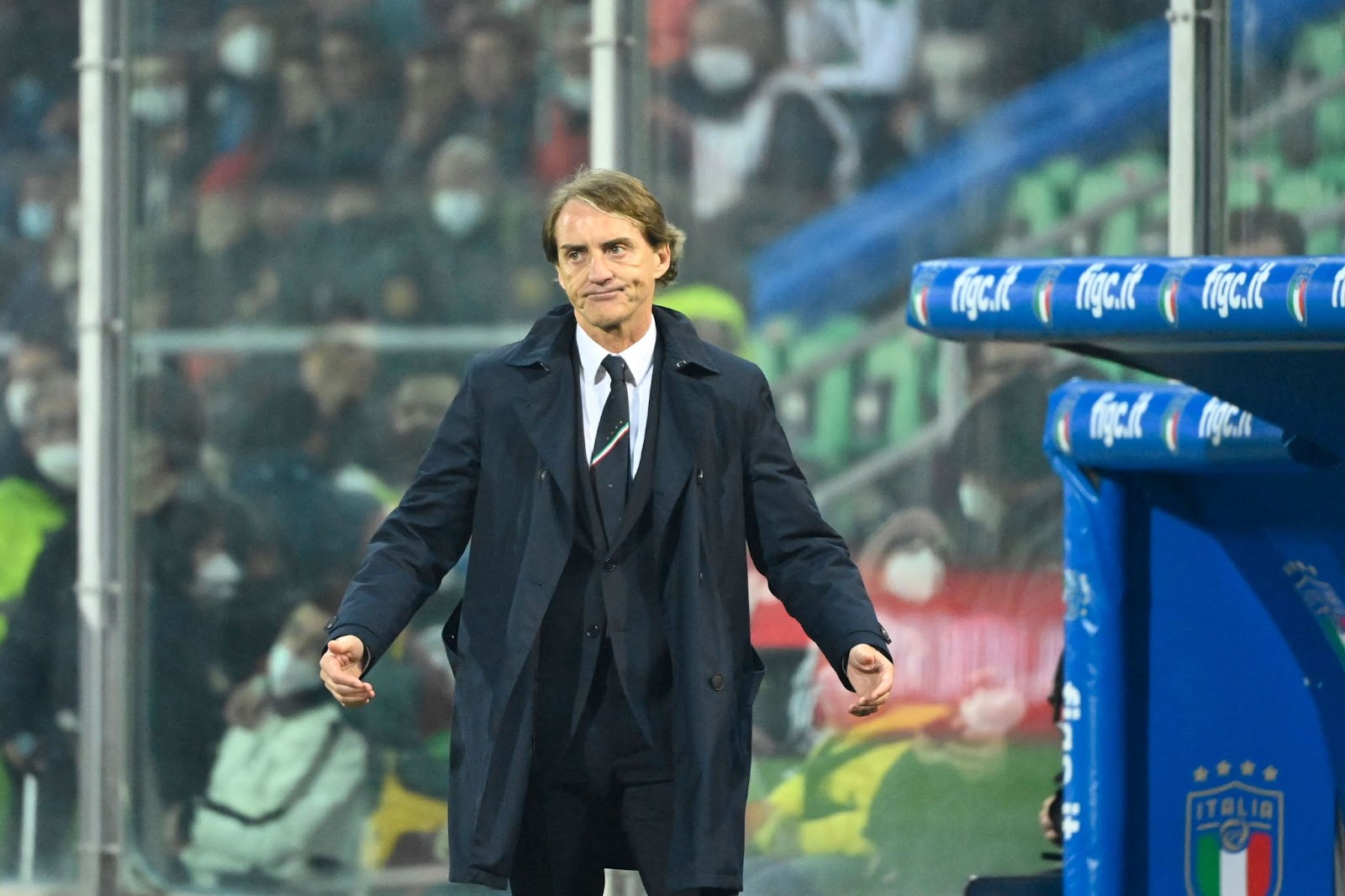 To the eyes of the most observant, the first crunches of Mancini's national team had absolutely not escaped, which after Euro2020 has struggled a lot from the point of view of results and of performance. Italy were first in the standings in their group and there were absolutely winnable matches with Bulgaria (1-1), Switzerland (0-0), Lithuania (5-0), Switzerland (1-1) and Northern Ireland (0- 0).

In these matches, 4 draws and a victory (against Lithuania). The Azzurri lost all the advantage they had accumulated over Switzerland and were forced to go to the playoffs, which, after winning a European championship, is absurd and unexpected. A series of disappointing results, both in terms of the play and the opportunities created (although we continue to talk about Jorginho's missed penalties), which undoubtedly weigh, but Italy has done too little in general, the absence of Leonardo Spinazzola made an important, a real secret weapon of the national team that triumphed at Wembley, but there can be no justification in any way.

Mancini knows this, he is disappointed and admitted that the failure to qualify for the World Cup is the biggest disappointment of his career. We do not doubt it and he will certainly be the first to be disappointed and angry, but the Azzurri crisis comes from a long time ago and this flop took shape match after match under the eyes of everyone, with a lack of corrective interventions by the coach.

On the contrary. Mancini dusted off a great classic of the Italian national football team: gratitude for the winning group. A mistake made by Enzo Bearzot first, by Marcello Lippi then and now also by Mancini, who chose to continue to rely on his "heroes", on the guys who took him to the top of Europe and didn't try anything new, he didn't build anything new. 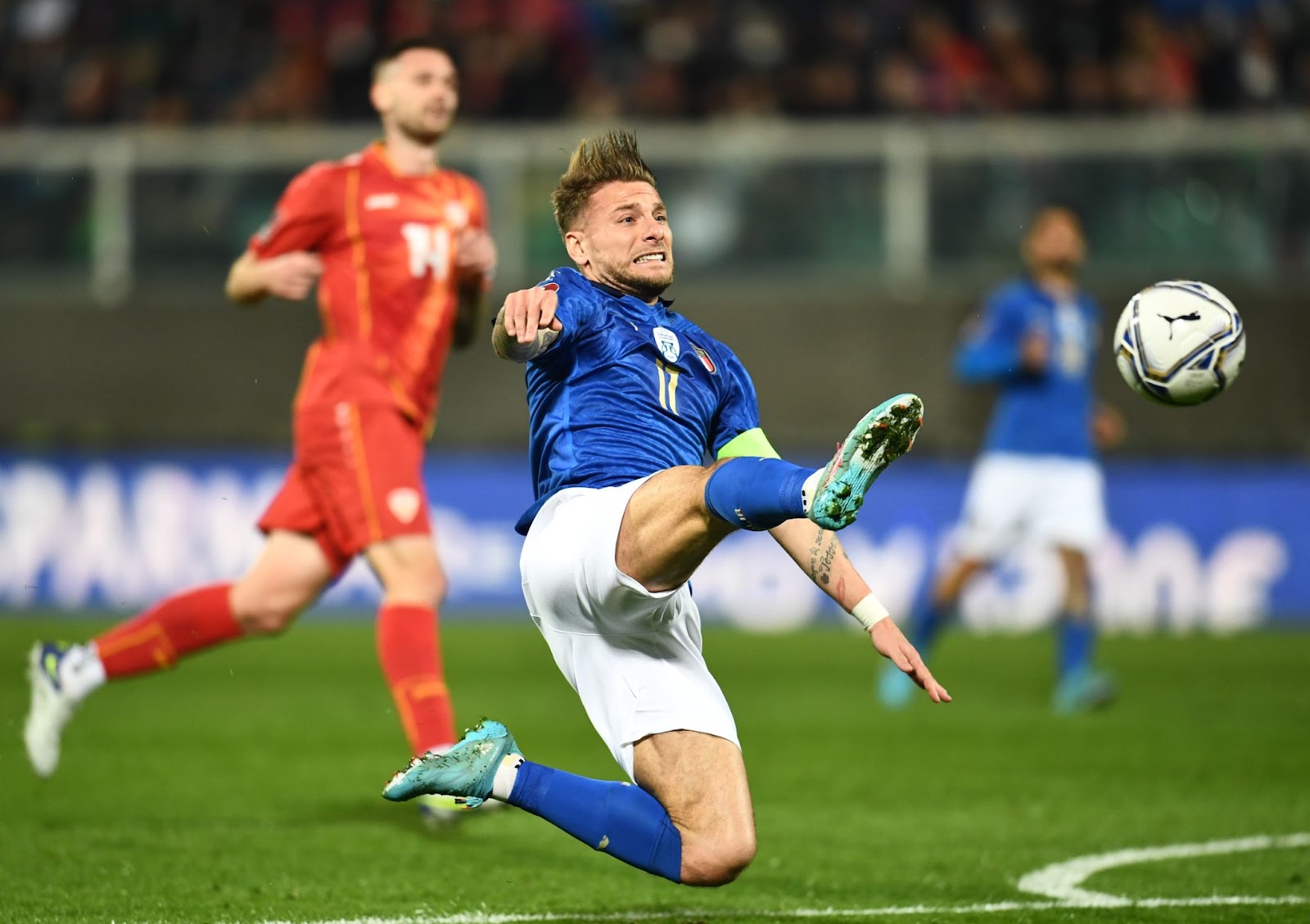 Italian football offers many talents today, the time of talent shortage is far away, but after Euro2020 the choice was never to include players such as Davide Calabria, Mattia Zaccagni, Gianluca Scamacca, Nicolo Zaniolo, and so, Mancini must take responsibility.

Lorenzo Pellegrini missed the European Championship due to injury, it is true, but Mancini practically never launched him and even in the decisive match against North Macedonia kept him on the bench for almost 80 minutes, while Zaccagni and Zaniolo were even in the stands, together with Scamacca (in theory not at his best, but on Tuesday evening against Turkey he will play as a starter, so…). They are all players who are playing well with the club's shirt, as well as Sandro Tonali, who was left on the bench for almost the entire duration of the match against Macedonia.

Relying on the players who have won the European Championship is understandable, the feeling of gratitude is human and it is also appreciable, but if you see that the players you are betting on do not give you answers, indeed they are leading you to hit a wall you must intervene. Insisting with Ciro Immobile as a starter was a mistake: after the failure against Sweden, another bitter national team disappointment for the Lazio goalscorer and this time too he is among the most responsible.

Immobile is a great player and the numbers with Lazio prove it, but at 32 it is legitimate to take stock and Ciro's career says that away from Lazio (and apart from the two years with Pescara and Torino) he doesn't have the numbers of a great striker. With Borussia Dortmund and Sevilla it did not go well, with the national team scoring few decisive goals. Mancini chose to bet on him with blind confidence and it was a mistake. The match against North Macedonia may have been Immobile's last match with the national team. Another very disappointing player, who has given little and nothing to Italy in recent games, is Lorenzo Insigne, who is struggling like never before with the Napoli shirt and has only scored two live-ball goals since the beginning of the year. Only two, the rest were penalties. A little bit to be considered the absolute starter of the national team, right? 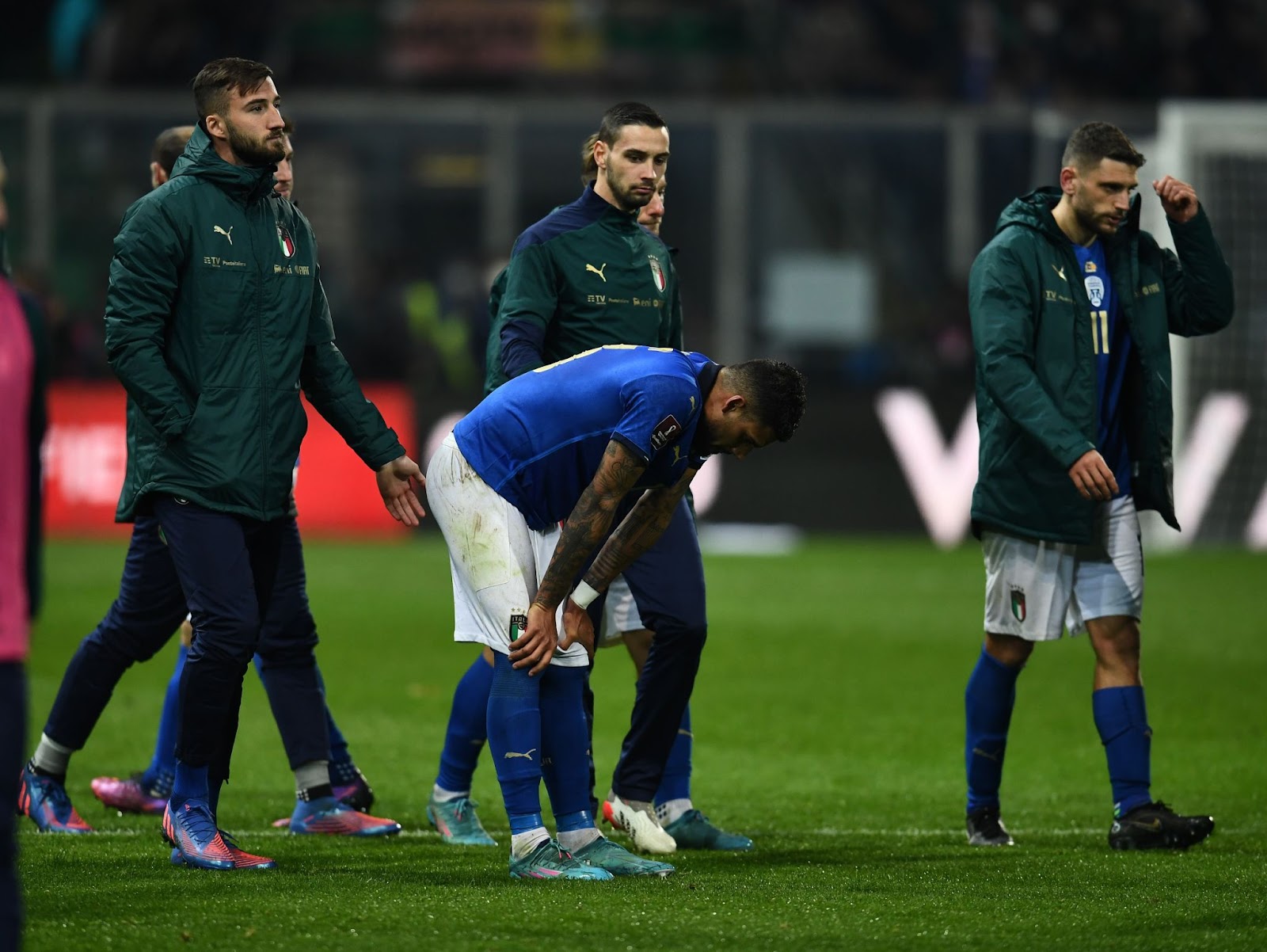 Another player who disappointed a lot was Nicolo Barella. This year he never touched the peaks of last season, during which he certainly played to the best of his ability thanks also to the work of Antonio Conte. Mancini made the first substitutions in the 77th minute, by which most of the time had been wasted, despite the fact that the team was practically building nothing. Looking at Mancini's choices, it almost seems that this year he has never followed Serie A, that he has not seen any Italian football match, so illogical were his choices in recent months.

For days there has been talk of a crisis in the Italian football system, but the truth is that there was enough talent to allow Mancini to overcome an obstacle like North Macedonia. The coach's wrong choices made the difference, unfortunately. It is not clear what will become of the national team, what will happen, if Mancini resigns or if he will remain in his role. It is time for reflections, now more than ever, to understand whether or not there is the will to continue as Italy coach, which is very different from that of the classic club coach, who works with the players every day on the field.

Mancini's Italy melted like snow in the sun under the eyes of Roberto, who in a few months went from being (rightly) a national hero to being the first accused for this huge disappointment. Not only did he pay for his gratitude towards the players, but also for his arrogance: not using Leonardo Bonucci with the idea of playing him in the decisive match shows arrogance. Every match must be played and won on the pitch, there is no divine right in football, you have to write every single page of your story. And that's the beauty of football. Not using the fittest players in the league (Pellegrini, Zaccagni, Calabria, Tonali...) to drive his ideas shows arrogance. And a coach's ego can never come before a team's needs. Never. Especially when you coach a national team. 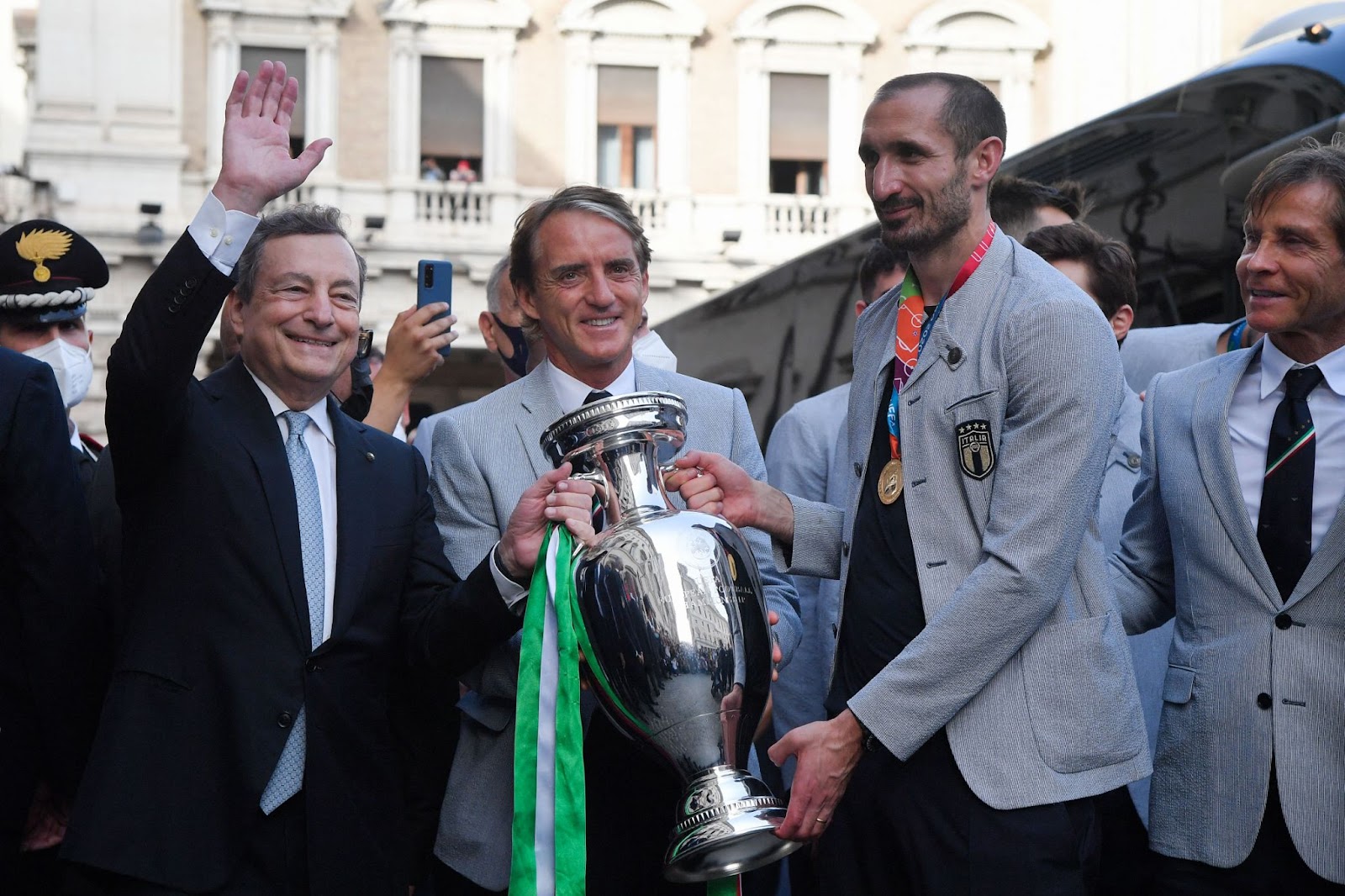 The truth is that Mancini has done and has undone. Winning the European Championship was an extraordinary result, because Italy is a team full of underdogs and there are few real champions, if you compare the Azzurri squad with that of other great national teams the comparison is almost merciless, but between making a good path and losing in the final stages of a competition and even missing the qualification for the World Cup, for the second consecutive time, there is too big a difference to ignore it.

It is impossible to compare Giampiero Ventura's work to that of Mancini, who was able to win Euro2020 and for this all Italians will be forever grateful to him, but the result is the same. Italy, which has won the World Cup 4 times in its history, will not be in Qatar. It has caused gigantic damage to the image of the country, also economic damage to the country and for the football movement.

If possible, this time it hurts even more, because Italy came from an incredible journey and there was the illusion of having built something, of having laid the foundations for a different future. Instead, in front of North Macedonia, a decent team that played a good game, Italy collapsed.

The Euro triumph was not an illusion or a soap bubble, but for this reason this fall hurts even more, because it was avoidable and after the extraordinary success of the Euros it feels like a betrayal.

At this point the question for Mancini is easy: to stay and work in order to redeem himself or to leave and hope that over time the memory of the joy of the won European Championship will erase the disappointment of the lost World Cup pass ticket? The coach enjoys the trust of the Federation, apparently of the group and is certainly a very good coach. The future, however, is all to be written. And that's the beauty of football.