Man Utd to include Alexis in bid for BVB whiz Sancho

Once again the Premier League shows everyone why it is the best league in the world, with Norwich beating Manchester City headlining the weekends results.

32 goals, 2 red cards, 5 clean sheets and some terrific highlights tell the tale of a thrilling weekend of football.

We here at Tribalfootballlook at the top performers from Matchday 5 in the Tribal Football Team Of The Week. 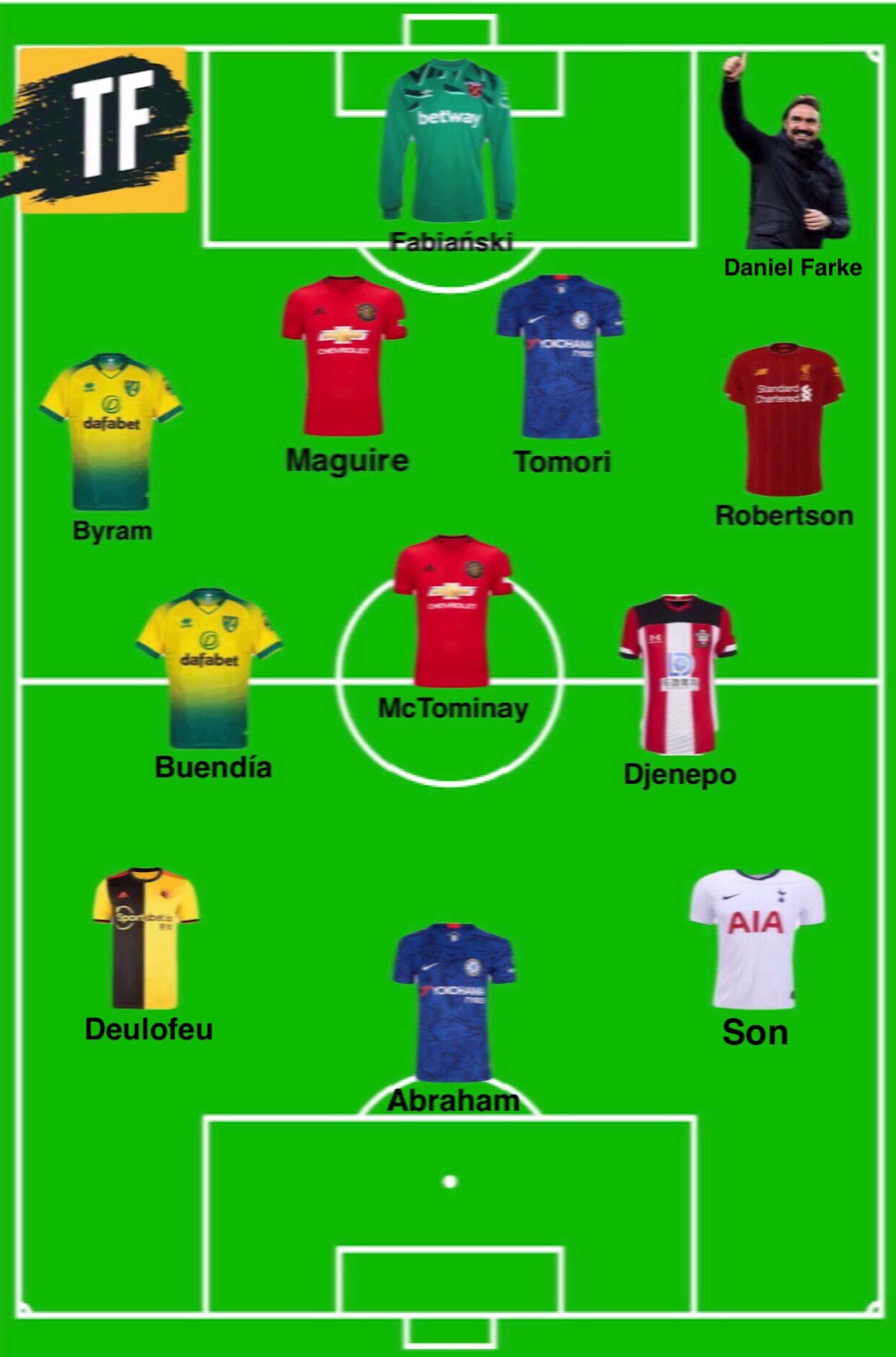 In Monday night's goalless affair, Lukasz Fabianksi was crucial between the sticks for the 10-man West Ham side that held on for a point away at Villa Park.

The Pole was at his alert best, when in the 40th minute he came out of his goal decisively to punch away a tantalising Jota cross.

In total, Fabianski made 5 saves, including a superb reflex save down low to his right as a deflected McGinn shot bulleted towards goal.

In a 14th straight win for the Reds, their Scottish left-back once again produced a top performance.

Dangerous as always bursting down the left wing, Robertson set up multiple chances, the first of which being a quality run fooling Emil Krafth and setting up Mane to equalise.

With 3 dribbles and 2 key passes, Robertson nearly scored himself late on as he tried to tuck the ball passed Dubravka.

As one of the starring acts in Frank Lampard's young English brigade, Fikayo Tomori was terrific in Chelsea's 2-5 win away at Molineux.

Playing on the Left-hand side of the back-three, Tomori was solid in defence making 3 tackles, 3 clearances, 8 interceptions and winning 3 aerial duels.

However it was his offensive contribution that stole the show, when in the 30th minute the ball came to the defender 30 yards from goal, where he let fly with a first-time shot that curled into the top left-corner, giving the blues the lead.

Playing against his old side, Maguire might have felt like Atlas walking onto the pitch at Old Trafford, however this didn't show as he was solid in defence in United's crucial 1-0 win over an exciting Leicester side.

Keeping a clean sheet and holding the foxes to only 3 shots on target, Maguire made 2 tackles, 5 clearances and won 4 aerial duels.

In offence Maguire was typically tidy on the ball operating at 83.3% pass accuracy, as well as registering 2 shots on goal.

In Norwich's heroic performance to snatch 3 points from title-favourites Manchester City, it seems cruel to not have room for all members of the back 4.

However it was the home-debutant who was most impressive, faced with a baptism of fire, having to deal with the likes of the inform Sergio Aguero and Raheem Sterling.

Without talisman Paul Pogba in the side, McTominay stepped up to the plate and showed terrific leadership, producing a best-on-ground performance in United's huge 1-0 win over Leicester.

In his best game of the season for the Red Devils, McTominay was strong in both facets of the game, looking assertive on the ball with 4 successful dribbles and 6/6 accurate long balls.

In Southampton's important 0-1 victory away at Bramall Lane, it was Moussa Djenepo who provided the attacking spark that edged the saints to all 3 points.

When in possession, Djenepo made things happen registering a whopping 6 successful dribbles. The Malian's quality on the ball was on show, with his goal the product of a super jinking run, beating all defenders with extraordinary skill and strength, to then cooly finish it past the keeper.

The talented and technical Argentine was at his best in Norwich's marvellous upset, playing with a ruthless tenacity on and off the ball.

Buendia was intricately involved in all three goals, whipping in the corner for Kenny McLean to head home, producing some terrific control to set the second goal in motion, and lastly poaching the ball off otamendi to tee up Puuki, claiming all three points.

Along with his 9 recoveries and 4 tackles, Buendia registered 3 key passes, 5 successful dribbles, 5 crosses and operated at a pass accuracy of 81.3%.

It's no wonder that Deulofeu was mixing it with the likes of Messi at Barcelona not too long ago with superb performances like that against Arsenal on the weekend.

The Spaniard was creating chances for fun at Vicarage Road, registering 8 key passes, and 7 shots on goal, untouchable on the ball with 7 successful dribbles and clean in possession with 93 touches at 85.9% pass accuracy.

Along with those superb stats, it was Deulofeu who intercepted Sokratis' pass inside the area to tee up Cleverly's goal, inviting Watford back into the game.

In the fluid Tottenham outfit that cut Crystal Palace to shreds, it was the South-Korean excitement machine that once again dominated the headlines.

With 2 superb goals, the first a smart finish after running in behind from a long Alderweireld ball, and the second a first time volley at the back post from Aurier's deep cross.

Along with his 5 shots on goal, Son was terrific in setting up chances. It was his pass to out to Aurier that set up the second goal and his terrific outside-of-the-boot ball through to kane to set up the fourth.

Tammy Abraham has well and truly answered the critics with a hat-trick at the Molineux taking him to the top of the Premier League Golden Boot tally.

It was a magnificent hat-trick for the young Englishmen. The first, a clinical twisting finish, the second a smart header and the final goal, some classy control followed by a bit of trickery to bamboozle Coady and smash the ball past the keeper to claim the matchball.

Abraham was also a presence in the air winning 7 aerial duels.

Beating the seemingly unstoppable Manchester City side is improbable enough let alone without almost all key defensive personal. This was the inconceivable task that Daniel Farke was faced with.

The Canaries faced up to the league's top scorers without Klose, Zimmerman, Hanley, Trybull, Roberts, Leiner, Vrancic, Aarons and both Krul and Godfrey under injury cloud. Lining up with home debutant Sam Byram and defensive midfielder Ibrahim Amadou playing at CB, to even get a point would seem impossible.

However with the dynamic front 3 of Puuki, Cantwell and Buendia (who were all excellent), the Canaries found chinks in the Man City armour and managed to pull off one of the greatest wins in the club's recent history.

Coming on in the 36th minute in place of Divock Origi, Firmino was so excellent off the bench that arguments could be made to include him in the starting team of the week.

The Brazilian's touch was simply genius (especially in the second half), creating chances out of thin air to tear holes through the Newcastle defence.

Firmino registered 4 key passes, one of which a sensational roulette turn playing through Salah to ice the game.

Despite a cluster of quality goals from around the league on the weekend, it was Djenepo's run that gets the cake on Matchday 5.

Picking up the ball 30 yards from goal, the Malian charged forward moving past Norwood with strength and skill, and baulking the central defenders to get in on goal, smashed it past the keeper to win the game.

Djenepo with a beauty of a solo goal!

Gets fouled, stays on his feet, and scores to put the Saints ahead!#OptusSport#SHUSOU#PLpic.twitter.com/Z2mSyc4NWM

Buendia dispossessing an unsuspecting Otamendi on the edge of the area leading to the winning goal is symbolic of the broader impact of this game.

Despite having a centre-back pair worth around 85 million pounds, the absence of Aymeric Laporte left behind a shaky defence that faltered against newly promoted Norwich.

This mistake, this result, has certainly blown the title race open for Liverpool, who now have a significant lead at the top.

City need to remove these defensive frailties from their game if they want to reclaim their title for a third year running.