As we have come to expect in the English Premier League, it was a dramatic weekend, filled with late goals with major ramifications.

Both frontrunners Liverpool and Man City fell behind but managed to claw their way back to somehow claim 3 points.

Leicester produced another top performance to cement themselves in 3rd spot and Sheffield United blazed through Burnley to move into the top 6.

We here at tribalfootball look at the top performers from Matchday 11 in the Tribal Football Team Of The Week. 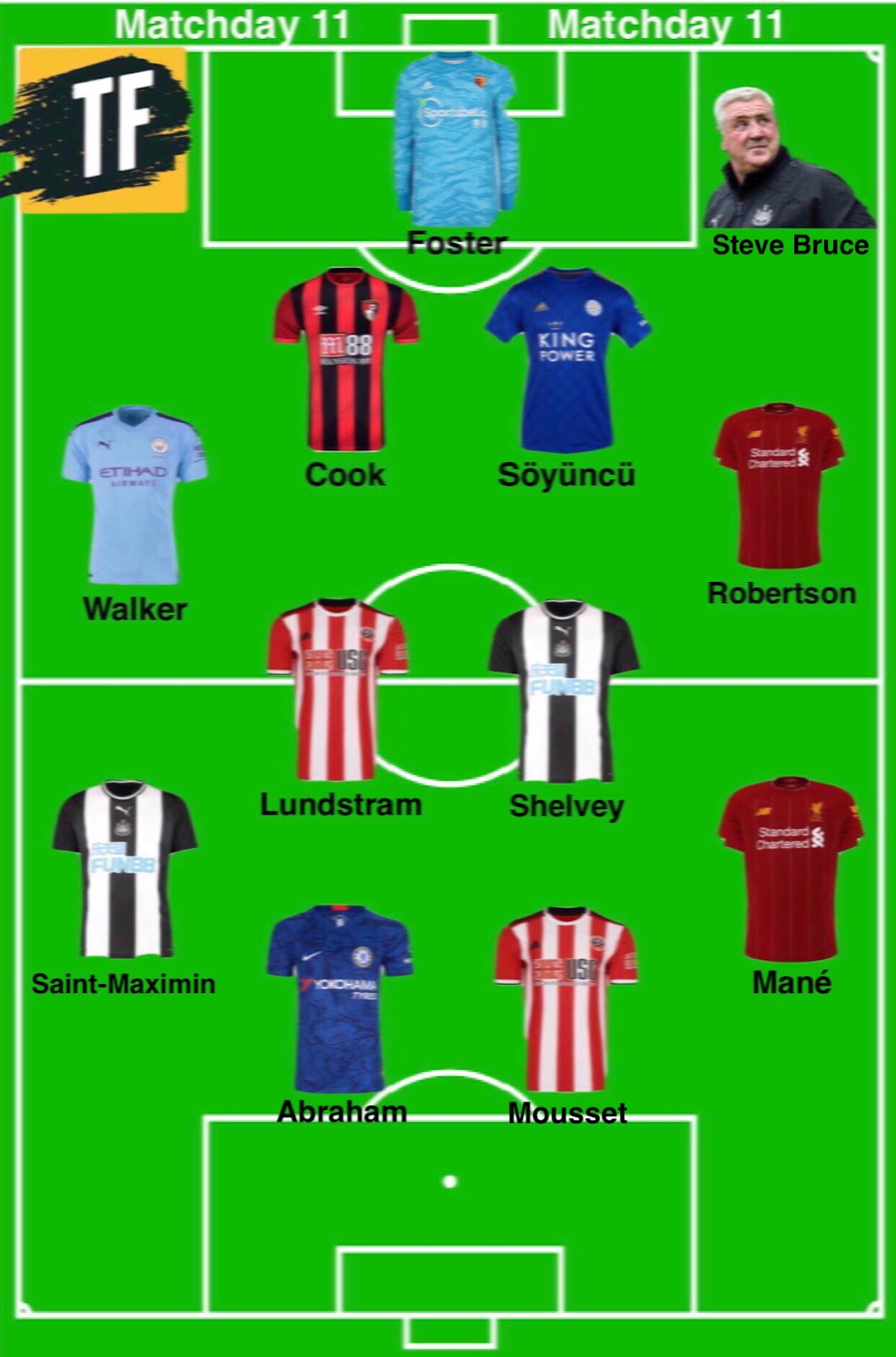 Despite a disappointing narrow loss to Chelsea, keeper Ben Foster was crucial between the sticks for the hornets, keeping his side in the match for the entirety of the 90 minutes.

Foster made a huge 8 saves, continually keeping the blues at bay, both from close and long range.

He even nearly snatched a point for his side when he went forward deep into stoppage time and fired a bullet head at goal, only to be denied by his opposite number.

A lot of the focus of this segment, as well as world football, falls upon the skill of individual players. However, what often goes under the radar is appreciating top footballing mentality.

Andy Robertson clearly has bucket loads of ability, with the Champions league winning left-back well and truly in the discussion for being the best in the world at his craft. However when the game looked lost for Liverpool, it was his desire that once again put him in the spotlight.

In the 87th minute Robertson flew past his marker El-Ghazi and busting his gut made a run to the far post, rewarded by Mane who set up the Scotsman to head home. It was an inspired goal worthy of a title-contender.

Steve Cook was at the centre of a rigid Bournemouth defence that gave very little away to a visiting Manchester United side.

The Leicester cult-hero is ever ingraining his name deeper into the hearts of foxes' fans after another commanding performance in their 0-2 win at Selhurst Park.

As always the Turkish defender was robust at the back, preventing the dangerous duo of Zaha and Ayew from registering a shot on target. Soyuncu also won 7 aerial duels and made 8 clearances in his sides impressive clean sheet.

However his headline moment came in the 57th minute when he willed himself at the ball from a corner, stooping to steer his header into the back of the net, giving the foxes a precious 0-1 lead.

With another Man City upset on the cards, the pacy full-back almost single handedly pulled his side across the line in City's 2-1 comeback win.

In the 70th minute, the England International drilled in a ball along the ground, expertly picking out Aguero in the box who had the simple task of turning it goalwards to equalise for City.

Again in the 86th minute, Walker arriving late in the box found himself on the end of Angelino's deep cross and managed to score on the half-volley, seizing all 3 points and capping off a terrific performance.

Recalled to the starting line up for the first time in 6 games, the mercurial midfielder was at his creative best on return.

Controlling the Newcastle midfield, Shelvey showed-off his set piece prowess, putting in a beautiful cross for Joelinton to set up the first goal and then scoring a world class goal from a 35 yard free-kick.

Shelvey could've scored one before as well when he hit one first time with the outside of his boot, which smashed against the frame of the goal.

The Englishmen is certainly developing an eye for goal, scoring the opening brace in his sides 3-0 win over Burnley. It was a case of 'right-place right-time' on both occasions for Lundstram, who got on the end of attacking moves after intelligent runs, showing composure and skill to cooly put away both chances.

With 5 shots on goal and 3 tackles, it was a strong performance from the midfielder who sees his side move into the top 6.

You'll hear it right across the footballing world, but Liverpool's late comeback was the sign of a side ravenous for a Premier League trophy.

The architect of this superb win was the ever dangerous Sadio Mane.

With the game looking all-but lost at Villa Park, the Senegalese winger floated in a perfect cross for Andy Roberston to head home.

With the away support still celebrating a salvaged point, Mane in the 94th minute attacked the Liverpool corner and headed home into the far post, snatching a historic 3 points from no-where.

In total Mane had 6 shots on goal and 3 key passes.

Every time Saint-Maximin touched the ball, something exciting happened, either blistering past defenders or bamboozling them with his immaculate skill on the ball.

With 5 successful dribbles and 3/3 shots on target, despite not being able to find the back of the net, it was certainly a stand out performance.

With only 3 Premier League goals in 58 appearances coming into the 19/20 season, eyebrows were raised when he was signed by Sheffield in the summer, with not many expecting Lys Mousset to be a strong attacking threat.

However the Frenchman has hit a purple patch of form under Chris Wilder and with 3 goals from his past 5 games, managed a hat-trick of assists against Burnley in the blades 3-0 win.

Mousset showed his more creative side with his 3 assists (4 key passes), providing a sagacious touch to set up the first goal and a cutting through ball for the third.

The youngster was at his clinical best leaving his mark on both Chelsea goals in their 1-2 win at Vicarage Road.

After being played through by a simply mouth-watering Jorginho through ball, Abraham was alert to get to the ball before the keeper and cooly dink it past him with a single touch.

Again in the 55th minute Abraham was played through on goal and again with a one-touch pass rifled it into the path of Pulisic who hardly had to move his feet to double Chelsea's lead.

Following the mounting pressure from England's North East, the Veteran manager needed a big performance to lift his side, who hadn't managed to score more than a single goal per game all season.

Recalling the more attacking Jonjo Shelvey alongside Isaac Hayden from suspension, the Longstaff-less midfield dominated proceedings at the London Stadium.

Furthermore, sticking with the much criticised Joelinton and Almiron paid off, as them alongside Saint-Maximin produced a devastating performance.

Although the scoreline may have read a tight 2-3, the Magpies where miles ahead of their opponents, with the Hammers lucky not to find themselves 5 or 6 goals down.

RT NUFC " Jonjo Shelvey spoke frankly to NUFC TV after his second goal of the season - an inch-perfect free kick at WestHam yesterday.

Coming on in the 58th minute, the young Belgian once again provided a much needed attacking spark, turning the match in favour of the Seagulls.

10 minutes after coming on Trossard got onto the end of a Montoya cross and flicked it past the goalkeeper at the front post to break the deadlock.

Then in the 84th minute he flighted in a terrific set piece for Shane Duffy to ice the game.

A goal and an assist along with 4 key passes is certainly the impact Graham Potter would have dreamed of.