It was a dramatic weekend of Premier League football, with many of the top sides held to draws, and some of the promoted sides notching crucial wins early in the season.

We here at tribalfootball look at the top performers from week 2 in the Tribal Football Team Of The Week. 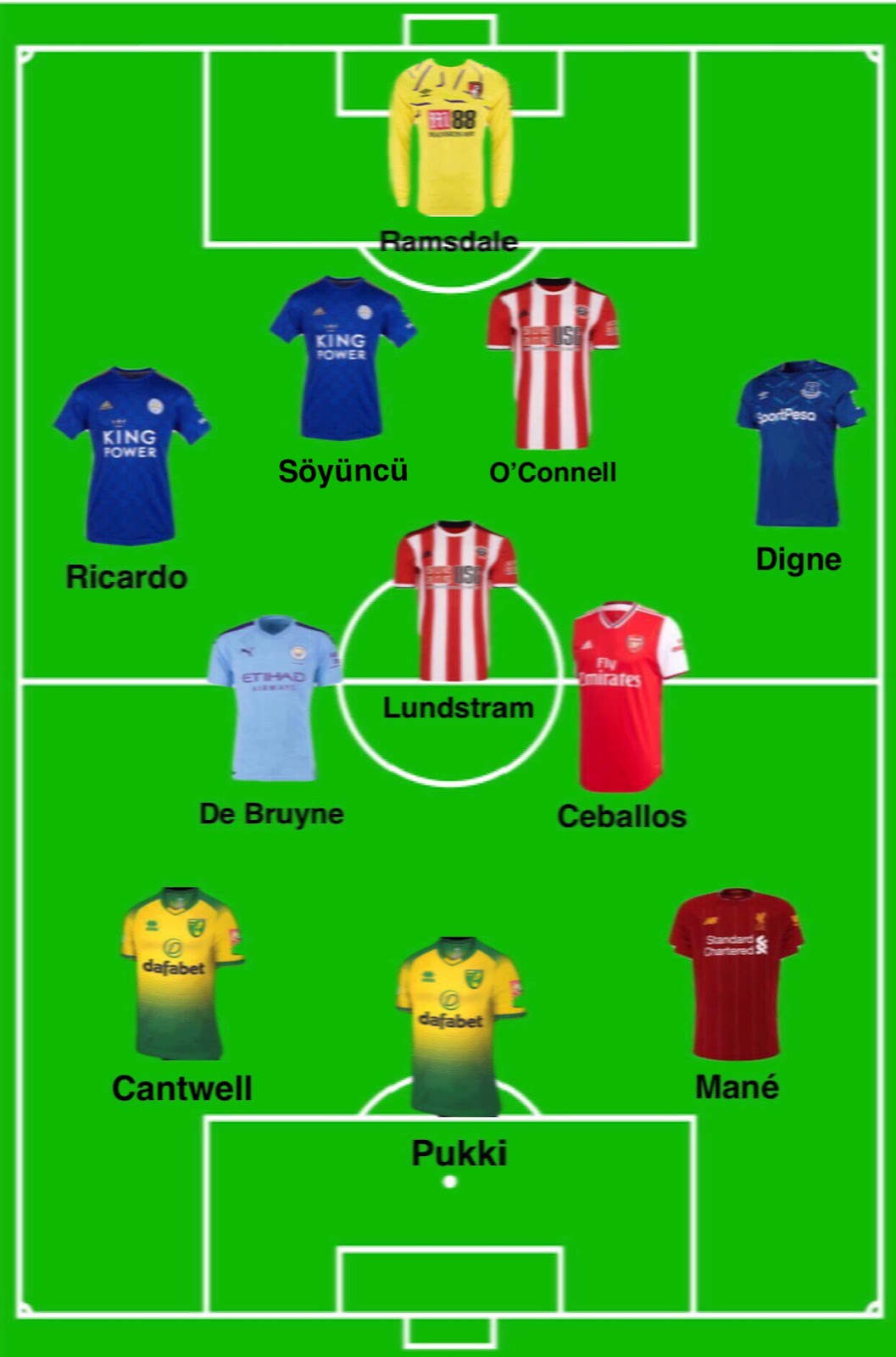 The young goalkeeper surprised most when he started the season between the sticks for the Cherries, but he has certainly taken the opportunity with both gloves. In Bournemouth's huge 2-1 win away at Aston Villa, Ramsdale was imposing making 6 saves, 2 claims and 2 punches.

Sheffield's 1-0 win over Crystal Palace was of course founded on the sturdy defensive structures of Chris Wilder, but also the expansive play from the centre-backs (Won't see this written too often). It is certainly exciting to see centre-backs charging down the wings, and this is exactly what O'Connell showcased at Bramall Lane.

Along with his huge 11 clearances, O'Connell had 3 shots on goal and was played a crucial pass from the wing in the build up to the goal.

The young Turkish defender certainly has big shoes to fill, designated to replace Harry Maguire at the heart of the Leicester defence. However Soyuncu has emerged as a fan favourite, as he nullified the threat of Giroud, Abraham and Willian, keeping the Blues at Stamford Bridge to a solitary goal.

He made 6 clearances, 2 interceptions, 1 tackle and registered 65 passes (the second most on the pitch).

Digne continues to grow in stature every week and is quickly becoming one of the top fullbacks in the league. Keeping a clean sheet against Watford in the 1-0 win at Goodison Park, the Frenchman was one of the top performers.

Digne made 3 tackles and 6 clearances, registered 6 crosses and 1 assist, a superb long ball to Bernard who converted the only goal of the game.

After a shaky start in the opening 10 minutes, the Leicester team and settled and slowly grew into the game. Ricardo at right-back was crucial to the comeback, in a mature performance that saw Leicester pick up an unlikely point.

Pereira made a huge 8 tackles, 3 interceptions and 5 clearances and was responsible for keeping the likes of Pulisic and Willian to relatively quiet games.

The loanee from Real Madrid immediately endeared himself to the Arsenal faithful on his home debut at the Emirates. In Arsenal's 2-1 win over Burnley, Ceballos was pulling the strings for the gunners, with everything seeming to go through the Spaniard.

Lundstram, along with the excellent contributions of Oliver Norwood and Luke Freeman, completed a midfield trio that dominated Crystal Palace. On the Blades' Premier League return at Bramall Lane, the Englishman was dominant in both aspects of the game.

He made a terrific ball across the box which McGoldrick should have put away, and of course cooly finished the deflected Guaita parry in the 47th minute to put the Blades in front, a goal that would give Sheffield all 3 points.

The Belgium midfield maestro was back to his very best at the Etihad in City's bewildering 2-2 draw against Tottenham. De Bruyne's passing and movement were simply world class, with 2 gorgeous assists. 2 crosses, with immense pace and accuracy that carved up the Tottenham backline.

Mane was the main attacking threat in the deadly Liverpool frontline, on his return to St Mary's Stadium. He scored a superb goal in the first-half, cutting in from wide and curling his shot from the edge of the area, finding the back of the net from a situation of little promise.

In the second-half he robbed the ball off Bednarek and played in Firmino who put the game beyond Southampton. In total Mane had 5 key passes and 2 shots on target, along with his goal and assist; a star performance.

The Local Lad was instrumental on the right-wing for Daniel Farke's side on the weekend, with his attacking nous key to the offensive football displayed in the 3-1 win over Newcastle.

Cantwell set up 2 of Pukki's goals with a total of 5 key passes, his pace and composure on the ball on show.

His success certainly answers the critics who have questioned Norwich's lack of investment in the summer.

Who else but Teemu Pukki? The Finish finisher was on song in Norwich's return to the Premier League at Carrow Road. Questions were raised whether Pukki could carry on his goal scoring record after a scintillating season in the Championship, and boy did he answer the critics.

Following a late goal last week at Anfield, Pukki has taken his tally to 4 with a superb hat-trick against Newcastle. A superb first time volley and two clinical finishes saw Pukki take home the matchball in a historic win for the Canaries.

A week is certainly a long time in football. Despite a solid display against Liverpool, Norwich walked away from Anfield with their tails between their legs losing 4-1.

All eyes fell upon Carrow Road against a Newcastle side also desperate for a win.

With criticisms circling about the lack of new signings, Farke stuck to his guns, and backed his Championship stars to shine at the top level. The likes of Pukki, Cantwell, Aarons, Krul, Stiepermann and others were all excellent and gifted their side a cherished 3 points, emphatically beating Newcastle 3-1.

Two masterstrokes off the bench in two weeks for Mauricio Pochettino, who brought on Lucas Moura in the 56th minute with his side 1-0 down. Albeit somewhat unconventional to bring on a 5'7'' striker on for a corner, the move paid off as the Brazilian rose in the pack and headed home the ball to grab a surprise equaliser with his first touch.

A name likely to find itself alongside 'goal of the week' many times throughout the season, Ruben Neves produced a cracking goal at the Molineux on Monday night.

Trailing to United 1-0, the Portuguese midfielder received a rapid pass at the edge of the area, and with the United defenders clambering towards him, he managed to get the ball out of his feet and score off the underside of the crossbar, somehow curling his shot past De Gea, giving Wolves a valuable point.

In Chelsea's blistering start at Stamford Bridge, Mason Mount on his home debut, showing vociferous exuberance, pounced on a lazy Wilfried Ndidi touch and almost falling to the floor, rocketed his finish past Schmeichel.

It was a lovely moment for Mount as he celebrated in front of the home fans, finally enjoying Chelsea-first team football after numerous loan spells, and great for Lampard who mentored him at Derby last season.