The voices of dissent are growing louder. Jose Mourinho's time at Tottenham Hotspur may or may not be coming to an end, but there is a troubling familiarity about the club's poor form and his reaction to it, namely scowling press conferences and throwing players under the bus. As for the supporters, the tediousness of the performances and the absence of a discernable direction have badly affected morale. We have been here before, and we all know how it ends.

Tottenham have lost three games on the trot and face dropping below Arsenal this weekend. If that was to happen, the discontent from the fan base might just reach fever pitch.

Chelsea, meanwhile, have adapted remarkably quickly to the demands of their new manager and appear to be playing with a clear tactical structure – a testament to Thomas Tuchel's excellent attention to detail and to the intelligence of his players. They thoroughly deserved their win on Thursday evening, the only complaint from Tuchel being their inability to convert their dominance into more goals.

Tottenham have struggled to find any rhythm regardless of the formation picked recently, largely because in the absence of Harry Kane – their talismanic striker and best creator – they lack any sense of purpose in possession. Mourinho does not coach attacking patterns, instead expecting his players to improvise, and frankly this is not suited to the modern game.

In an attempt to shut down Chelsea's narrow 3-4-2-1 under Tuchel, Mourinho threw the dice with a surprise switch to an ultra-narrow 4-2-2-2, in which Stephen Bergwijn and Tanguy Ndombele played directly in front of a midfield two and directly behind a front two. The box-shape this created in the middle of the park was designed to mirror Chelsea's four of Matteo Kovacic, Jorginho, Mason Mount, and Callum Hudson-Odoi, and the Spurs players were clearly instructed to man-mark these four.

That in itself is highly unusual, because it meant they were pulled out of shape into whatever eclectic pattern was created by the Chelsea midfielders' movement, but that wasn't the main flaw. Tottenham had nobody in the wide areas, or even the inside channels, which allowed Chelsea to play simple passes through these wide-open spaces and feed the forwards.

This led directly to the penalty from which Chelsea scored the winner; with Tuchel's forwards making excellent runs in behind, it was easy for Chelsea's unmarked players to thread the ball through the absurd gaps on the outside of Tottenham's 4-2-2-2, as the image below shows: 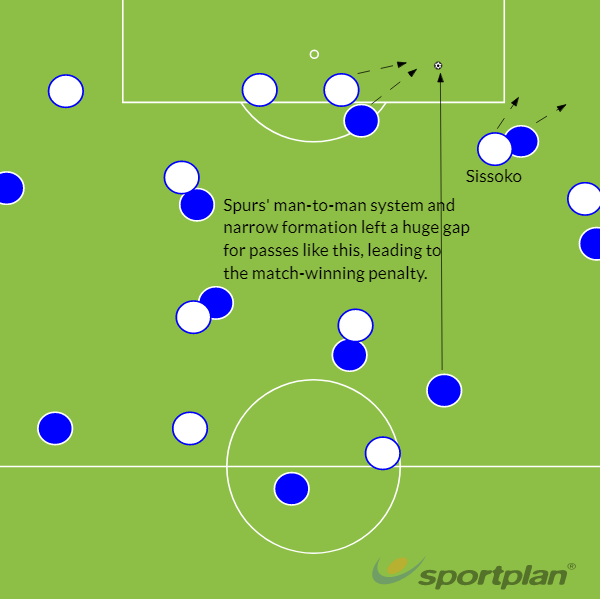 It seems unlikely Mourinho's experiment would have worked even if Tuchel had played the same 3-4-2-1 formation as against Burnley and Wolves, a system that saw Chelsea play far too frequently in front of the opposition defence. With so many bodies behind a lone striker, not enough Chelsea players were making runs beyond the defence, causing some staleness.

However, Tuchel threw a curve ball on Thursday night by selecting a 3-4-1-2 for the first time: Mason Mount had a free role playing as a number ten, while Callum Hudson-Odoi started alongside Timo Werner. The split strikers made lots of runs in behind, hence the goal, and were happy to split wide or come together centrally, responding intelligently to how Mount managed to control the game.

It should come as no surprise that someone as smart and hard-working as Mount would adapt so quickly to a manager's complex tactical instructions, and indeed he dominated this game by consistently dropping into pockets on the outside of Spurs' 4-2-2-2. It has only taken three games for Tuchel to see that Mount is Chelsea's most important player.

Clearly Tottenham were not ready for the system switch, which not only gave Chelsea that out-ball through the lines to Mount but ensured the Spurs full-backs were caught without any help: 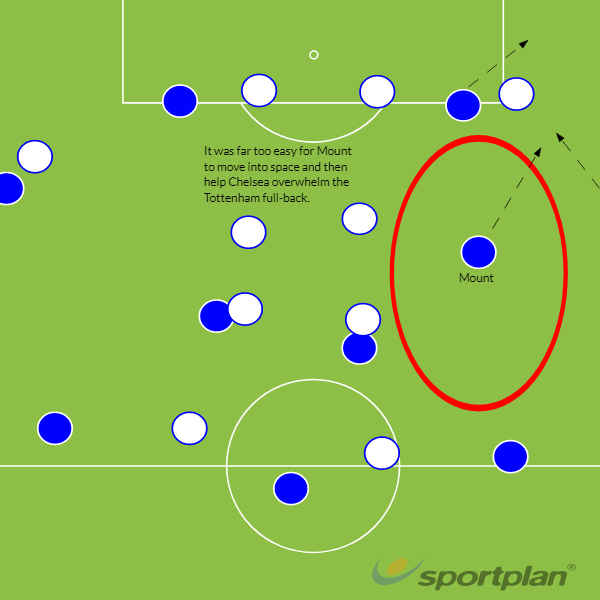 CHELSEA AGAIN STRUGGLE TO SCORE AS SPURS RECOVER IN SECOND-HALF

But Chelsea couldn't take full advantage, and in fact didn't manage a single shot on target from open play in the first half despite playing very well. There is a curious mismatch at the moment under Tuchel between their strong structure in the first and second thirds but inability to get things right as they approach the box.

This is most likely a simple case of needing more time to build relationships and solve attacking problems on the training ground; it is the one aspect that Tuchel will want active input from his players, and therefore it will take time to come together.

On Thursday, it allowed Spurs to get in at half-time and still believe they could get something out of the match, hence their sudden upturn in form after the break. In an extraordinary change of attitude, their PPDA (the number opposition passes between each defensive action, measuring pressing intensity) dropped from 42.6 in the first half to 10.3 in the second.

But as their formation became a narrow 4-3-3 when on the ball, Spurs still couldn't produce anything even with more possession and territory.

It leaves Spurs on the verge of drifting into mid-table, without a clear tactical direction or any sense of how to regain their attacking purpose without Kane. For Chelsea, they are moving at remarkable speed under Tuchel and, once Werner hits form and their interplay in the final third comes together, Chelsea will be a serious force in the Premier League.