Liverpool's unbeaten home record is over. Burnley's 1-0 win on Thursday night ended a 69-game, 1370-day run without defeat at Anfield that stretched back to April 2017. But the significance of the result has little to do with breaking records. It was a breaching of the fortress that symbolises and accentuates a serious issue taking hold.

Jurgen Klopp's side have failed to score in four consecutive league matches – the first time that has happened since Gerard Houllier's endgame almost two decades ago. They have gone five Premier League matches without a victory, and have won just four of their last 12 in the competition. After the brilliance of their title-winning 2019/20 season it is very much a 'massive punch in the face', as Klopp described it on Thursday night.

It is certainly too early to declare a crisis, like the one Kopp endured in his final season at Borussia Dortmund, but supporters could be forgiven for starting to worry. Liverpool have now won 60 points from their last 30 Premier League matches and although there are numerous caveats to that statistic – Covid-19's impact on the game; the fact Liverpool won the title so early last season – it is a troubling record.

What has gone wrong? Given that their drop in form coincides almost exactly with the pandemic, it is quite possible that the loss of the Anfield crowd has been enough to knock the club off course. After all, the margins were always slim: Liverpool won many games by a single goal last season, and according to understat.com over-performed their xG to a total of 24.72 extra points.

But there is a growing sense there is something deeper, even if this is currently just a small run of bad form. Things could very quickly get back to normal for Klopp's side. Then again, in a season like no other, it feels just as likely Liverpool's struggles will continue for some time.

Here's what has gone wrong, and how to fix it.

Although Liverpool's defensive record hasn't got worse since the injuries to Virgil van Dijk and Joe Gomez, their absence has nevertheless been hugely disruptive. A lack of centre-back options have forced Klopp into picking Fabinho and/or Jordan Henderson at centre-back, removing two vital cogs from central midfield and consequently dramatically weakening his side's attacks.

As previously mentioned, the margins are very thin at Liverpool: Klopp's is a fine-tuned tactical system and like a grain of sand in a microchip it only takes the slightest error for the structure and rhythm to collapse. This is what we are seeing without Fabinho and Henderson in their best positions.

Fabinho's presence at the base of midfield, screening against the opposition counter-attack with his superb defensive positioning and possession recycling, is the main reason Liverpool are able to sustain attacks. Liverpool like to attack in waves, gradually wearing down the opponent through constant suffocating pressure – and without Fabinho to prevent counters, that is no longer happening.

Teams can now begin to break and move their defensive line up the pitch, diminishing Liverpool's psychological stranglehold on encounters and leading to stale performances from the front three. Similarly Jordan Henderson is crucial from the right side of central midfield, probing expertly and setting the tempo with high-energy vertical passes to create those waves of pressure.

Given that Liverpool's pressing has dropped off this year (a natural consequence of an exhausting fixture list), Henderson and Fabinho are more important than ever, and yet neither player has performed in his preferred position throughout this five-game winless run. Henderson was left out of the squad altogether for the defeat to Burnley. 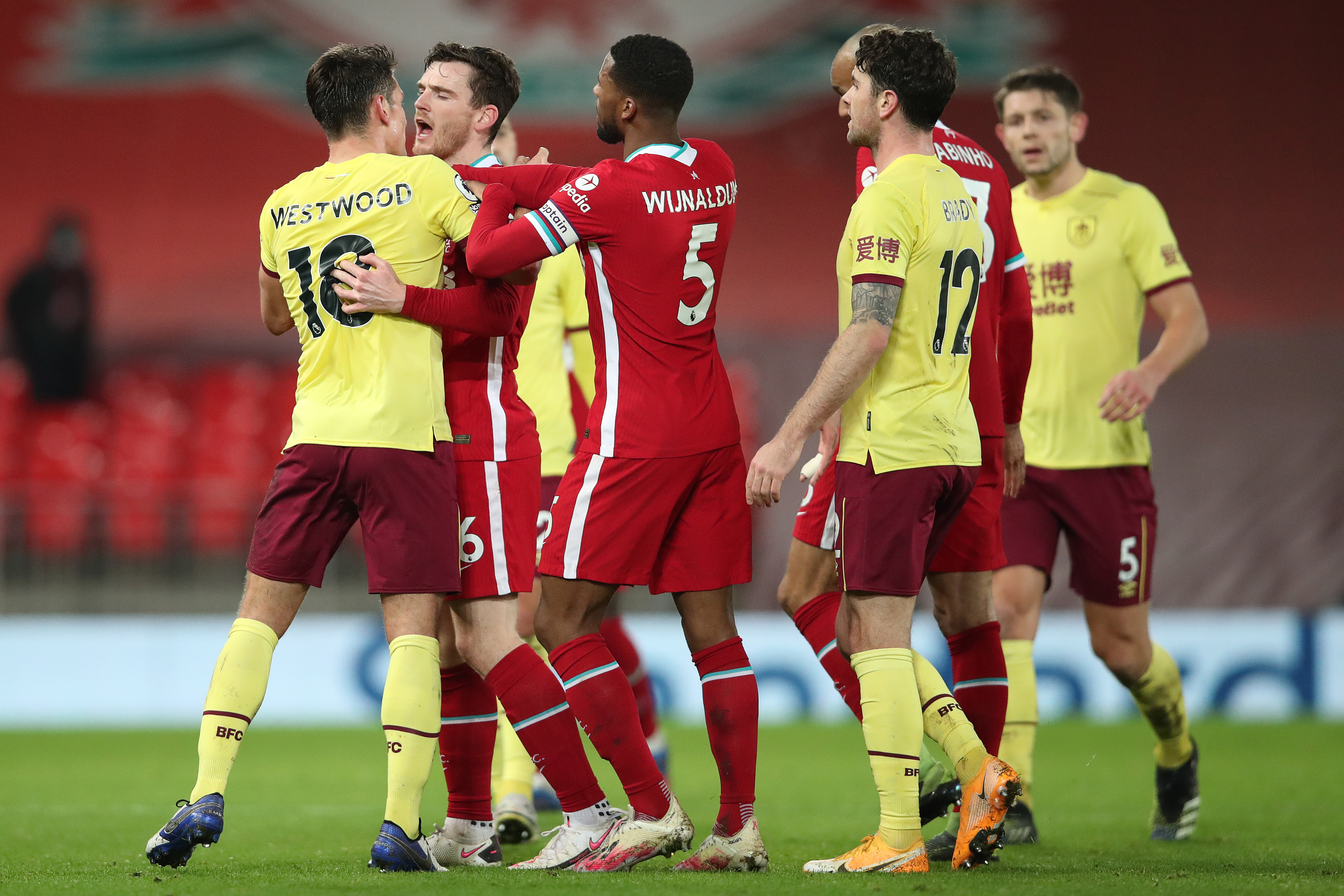 This territorial shift, with opponents now able to move up the pitch and relieve the pressure on their goal, has meant Klopp needs to be more defensively cautious too; last season he could instruct both full-backs to push forward, safe in the knowledge Fabinho was holding down the fort, but he no longer has that safety net.

That is why Trent Alexander-Arnold and Andrew Robertson are both sat a little deeper this year, rarely going forward together. Unsurprisingly, those sweeping cross-field passes between the two full-backs have disappeared, while Liverpool are no longer a reliable threat from out wide.

Klopp's 4-3-3 is predicated on a dual threat: if the opposition defenders stretch wide to deal with the full-backs they leave Mohamed Salah and Sadio Mane free, but if they stay narrow to cope with Liverpool's front three then Alexander-Arnold and Robertson can run the game.

With this line of attack diminished, Liverpool are more one-dimensional; it is has become easy for teams to sit back, stay narrow, and keep a clean sheet.

SOLUTION: GIVE FRINGE PLAYERS A CHANCE AND SWITCH UP THE SYSTEM

When managers are in a difficult situation like this one they need to dramatically shake things up in terms of both personnel and tactics, as Mikel Arteta has expertly shown this month. The young Arsenal manager introduced some academy graduates and abandoned his preferred 3-4-3 – with superb results.

Liverpool have deployed the same 4-3-3, with the same rhythms and attacking lines, for three years now and perhaps the system is a little tired. Some innovative thinking is needed, at least on a temporary basis and if only to shake the players out of their slumber. Sometimes changing things up is a solution in itself.

Klopp also needs to start trusting his fringe players more. First and foremost he should give Rhys Williams and Nat Phillips more chances in the first team since this would allow Henderson and Fabinho to move back into midfield.

Elsewhere, Curtis Jones has been a bright spark throughout this season and his youthful energy could spark Liverpool into life. Xherdan Shaqiri has looked useful over the last two games and ought to continue to feature regularly, while it is time Takumi Minamino is given a proper chance in the first team.

The Japan international has scored a goal and assisted another in his last two Liverpool games, and considering how poorly Roberto Firmino has been playing this is surely the right moment for Minamino to make the breakthrough.

It is possible that Klopp does not need to do any of these fixes. He was correct in his post-match analysis to highlight that Liverpool are still playing well in the middle third but are simply making bad decisions as they approach the penalty area. That is usually just a sign of low confidence. One win could be enough to rekindle the title challenge.

And yet… there is a lurking sense that Liverpool have been gradually slowing down for some time, and the comparisons with Klopp's final season at Dortmund are not without merit. Liverpool face Tottenham, West Ham, and Manchester City in their next four Premier League games. By this time next month we will know if this is just a blip – or a full-scale crisis.