While Real Betis have stumbled in the first weeks of the season, Nabil Fekir is happy with how he's settled. We caught up with the midfielder to discuss his first impressions...

Question: Well... to begin with, thank you very much for welcoming LaLiga to your new home, here at Real Betis. First of all, welcome to LaLiga, Nabil, it's a pleasure that you are here. What attracted you to LaLiga?

Answer: Well, everyone knows this championship, it's one of the best championships in the world and coming here to play was something I was really looking forward to from the very beginning and well, now I have been able to make that challenge come true.

Q: What did you see in Real Betis' project that brought you here?

A: I had a meeting with the directing board and it went well, they explained me the project they had and that they wanted to be on the top of the table, and also take a ticket to Europe next season, I liked that and I did not hesitate one second.

Q: How do you see the team now, not having had a perfect start?

A: Frankly, we have a great team. It is true that in the two first games, the results were not the expected but there are new players and a new coach and a new technical staff. We need to let time go by so that everyone learns to get to know each other and learn to work together and I hope that we do that very soon. 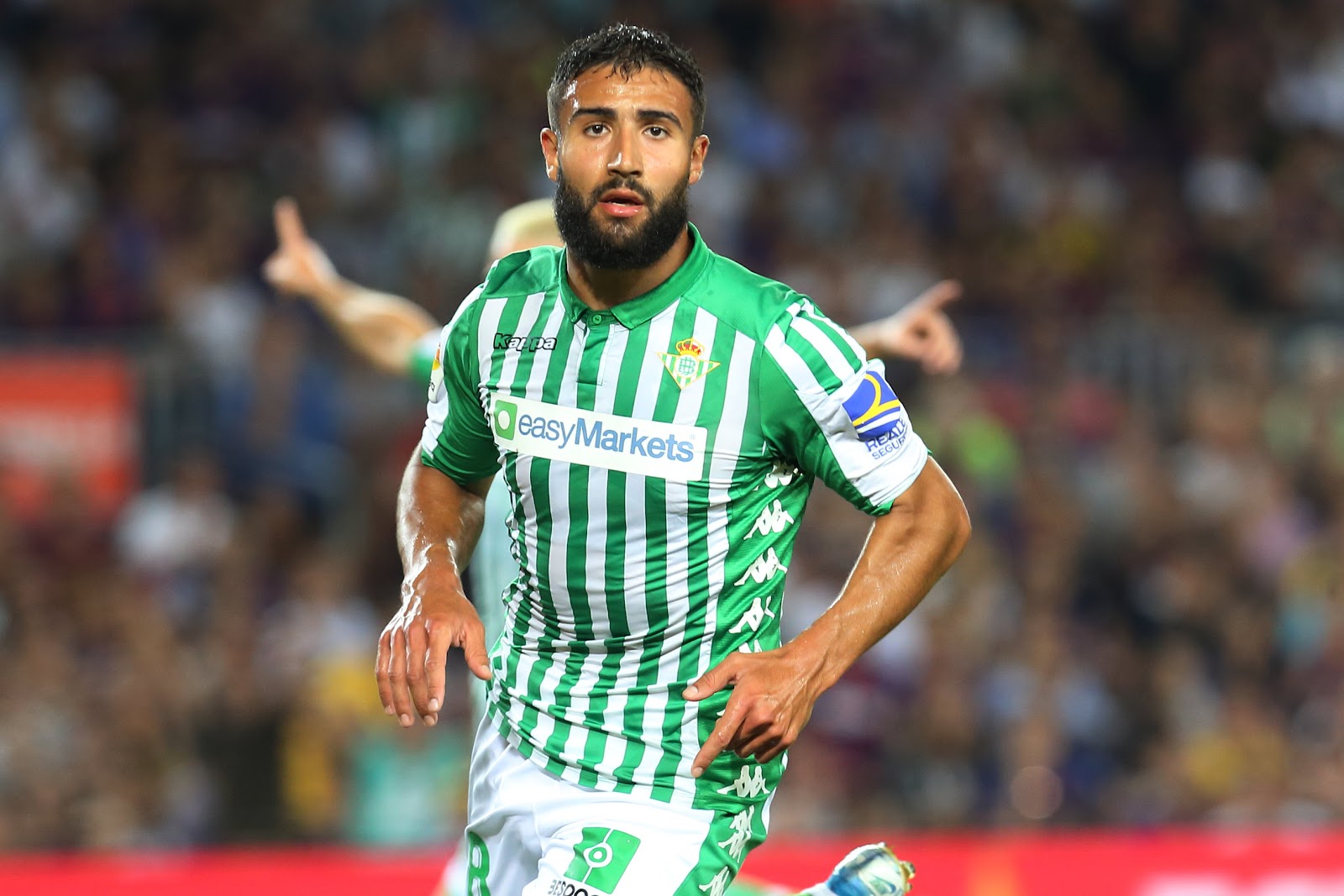 Q: Before the interview we spoke about Sevilla, a very sunny, hot city, very attractive to live in. What do you think about your new home?

A: I like it very much, frankly, it's very, very good. It is true that it is a bit hotter than in France but it's a pleasure to be here. It makes me happy. This is a calm city, there are many fans and it is a pleasure to see that so many people are involved with the club.

Q: Have you had the time to visit around the city a bit?

A: Yes, I have, and as I said, it's a nice city, very calm, small and very comfortable to live in.

Q: How did you adapt to the club and how did they welcome you here?

A: To be honest, the welcome to the club was really, really good. They all welcomed me very well: the players, the board and the technical staff. They all did their best so that everything worked out well and it's great they put so much effort in making a player feel good.

Q: We have already talked about the first two games of the season, that left a bitter taste, but you all showed a good level. What's there to improve in the team?

A: We can improve it all, as I have said, this is the beginning of the season and I hope that the team is able to play together, finding the automatisms needed and that we are on a good mood. I don't have any doubts on the way we train and I know that there's great quality so I hope that we start winning from Saturday on and that the machine starts working perfectly.

Q: Back there we can see the Benito Villamarín, how do you feel the support of Real Betis fans?

A: As I said previously, they are amazing fans. We need them and we will need them all throughout the season. It's now our turn to do everything we have to do so that they are happy and everyone is satisfied. 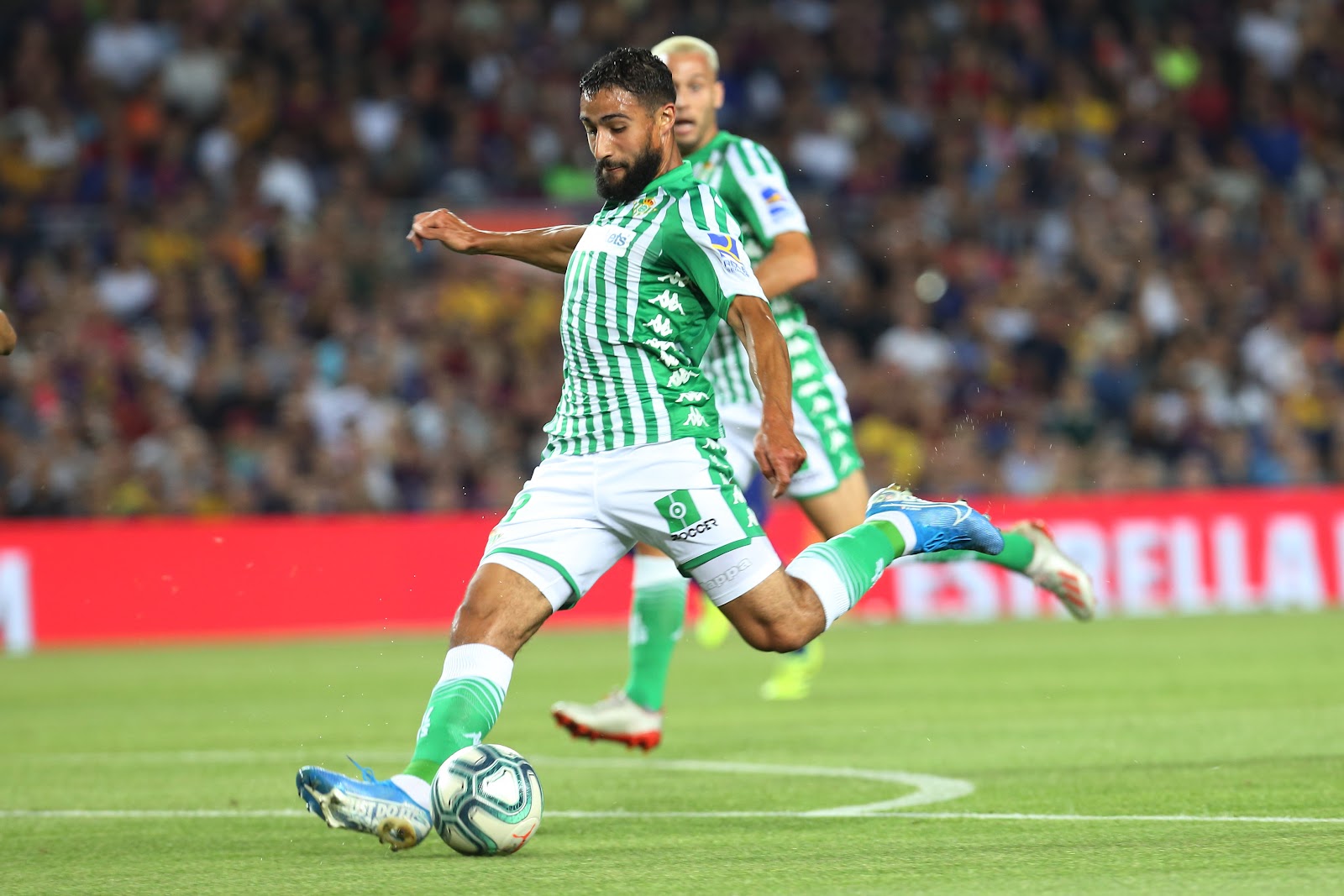 Q: You have played under Rubi and you have completed the pre-season with him, you know him a bit better now. What have you learnt from him? What is he asking from you?

A: He asks for me to play with freedom. We are working on the tactics and the positions. He is a new coach and that is brand-new for us. But, so far, everything's going well and we home that we continue working in the same way we are doing now. We are working well and that's the important thing.

Q: Individually, you have shown a great level and you have marveled the world of Spanish football with your good game against Real Valladolid and your superb goal at Camp Nou. How are you feeling?

Q: Can you tell us more about the goal you scored at Camp Nou?

A: We recovered the ball upfront, after, Sergio gave it on to Loren and then Loren gave me a through pass and I put the ball where I had to put it to' be able to score.

Q: When you scored, you seemed relieved, is that a correct feeling?

Q: What do you think is the team's goal for the season?

A: The goal for the season is that we do well on the pitch, that we are focused and on a good mood, and that we can have the chance to fight for the upper spots of the table and to return to Europe, because we have a group with great quality and that is the goal we have set at the beginning of the season.

Q: We have talked about Europe, I imagine that's a dream for the team, playing in Europe and, if possible in the Champions League, right?

Q: We all know that Real Betis have an astonishing midfield: Canales, Guardado, William Carvalho, Tello and yourself… How do you connect with each other and how do you play together?

A: We understand each other well, as you said, it's a high-level midfield, with great players and in a great club and now, I will have been here for a month already, we are starting to get to know each other well and everything is going better and better. 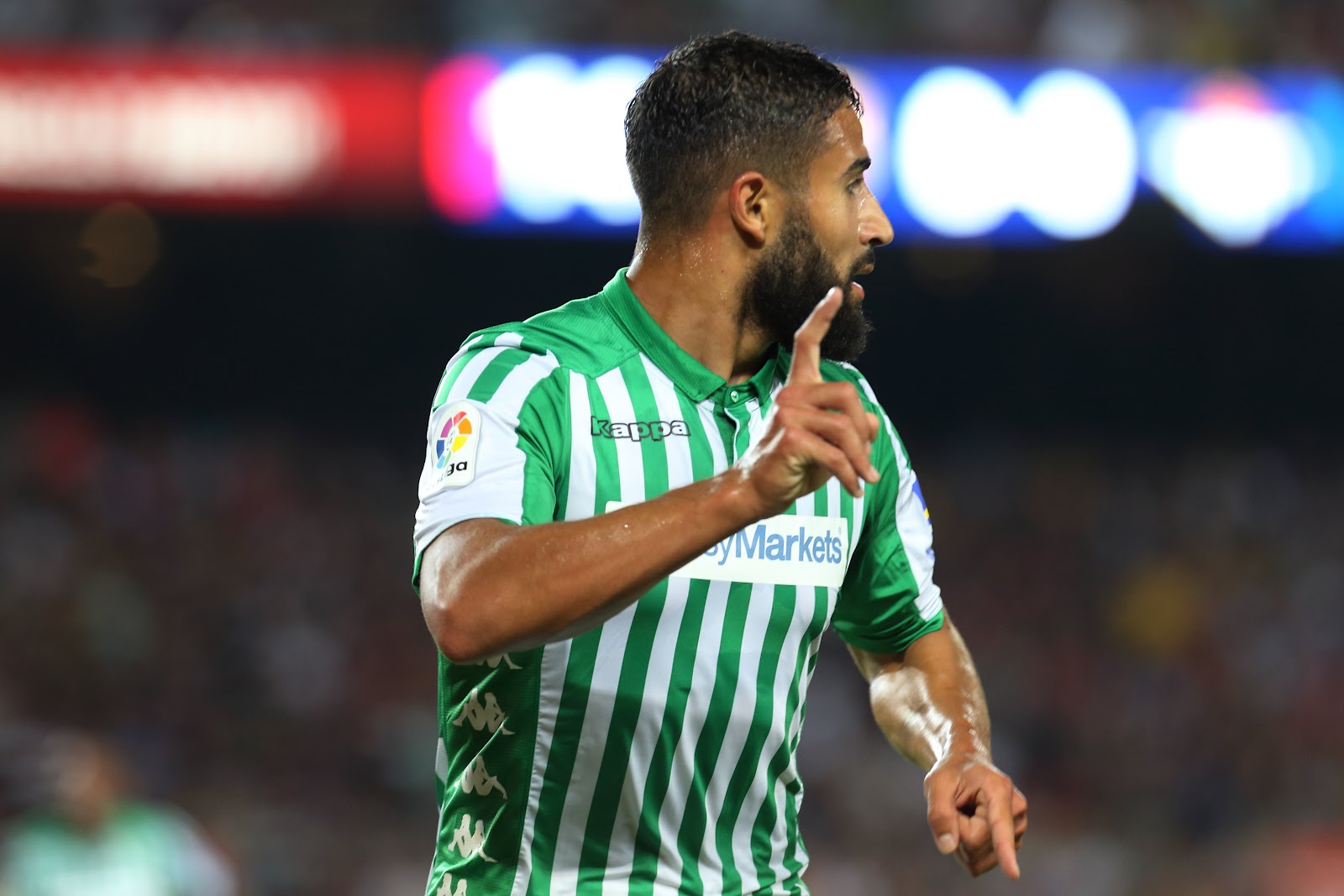 Q: Joaquin is probably the most charismatic player at Real Betis and he is a club legend. How is he personally and as a player?

A: He is very good, I have no complaints. He gives us his good humor and it is important to have someone like him on the team that gives his support to everyone. He has a good spirit and the mood you always have to have and in spite of being a 38-year-old he still has great quality and you can see that on the pitch.

Q: Let's go back to talking about your way of playing. We can see that it has maybe varied a bit from Lyon to Betis, because it seems as though here you have more freedom to do whatever you want and to move around freely. Is that so?

A: Well, in Lyon I had a lot of freedom too, but I had been a long time there and I needed new challenges. I came here with great ambition and they paid a high amount for me and so I will give my all to show the level that they are expecting from me.

Q: How do you explain the fans of Real Betis the that the team will have on the pitch under Rubi and after the great signings of Borja Iglesias and yourself?

A: Well the is based on the possession. We try to hurt the opponents and we use the spaces in the best way possible with Borja upfront, intriguing them with the attackers. I hope that we can already express everything we have on the pitch.

Q: Now, in LaLiga you have met many teammates from Les Bleus: Griezmann, Dembélé, Varane. Lemar, Umtiti… it seems as though LaLiga is in vogue in France.

A: Yes, that's good. As I said, this is a very attractive championship that attracts the greatest players and I hope that it continues being as it5 is and that we always have great players in this championship. 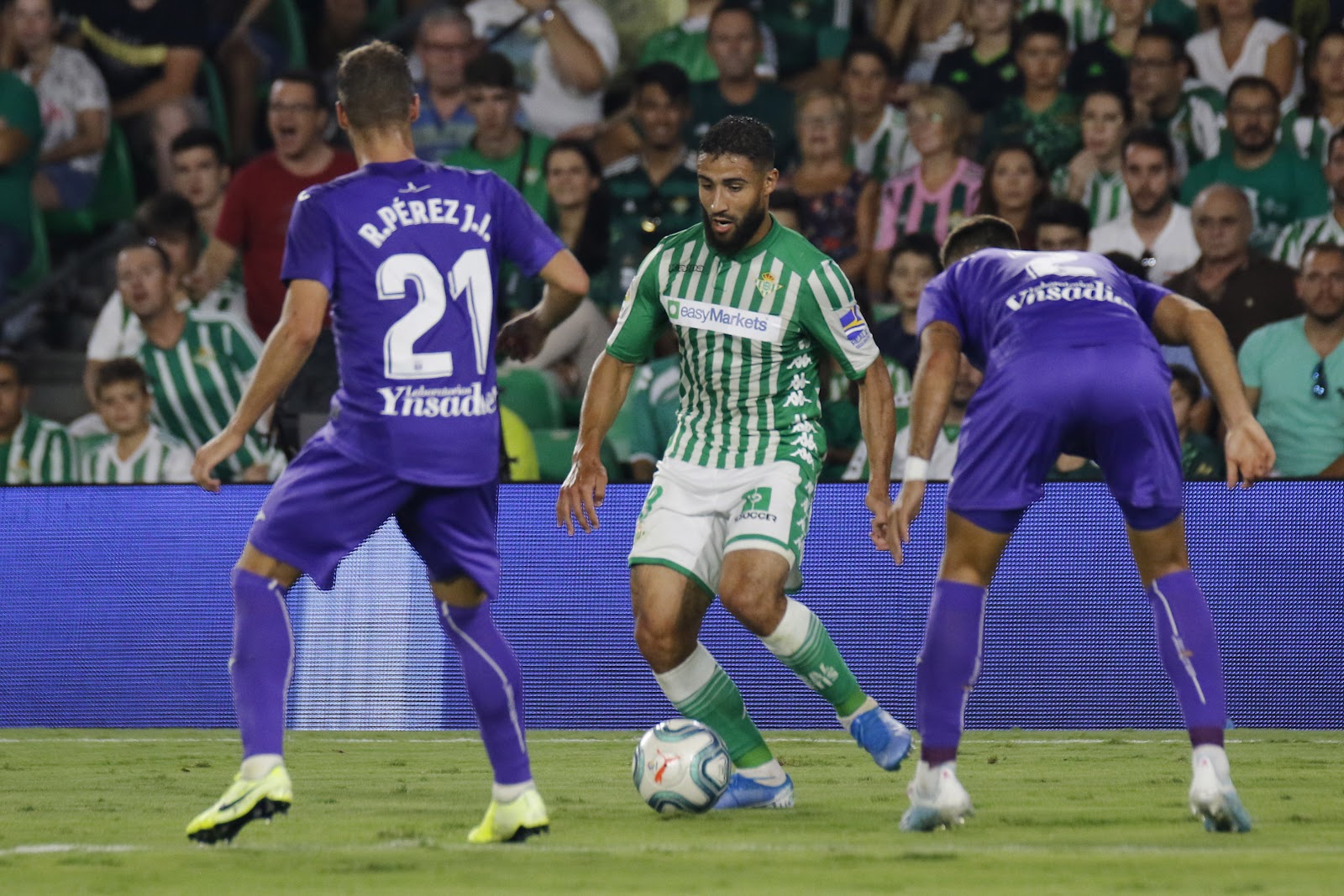 Q: I imagine that the people in the club have told you about the great rivalry there is between Sevilla FC and Real Betis, how do you see Sevilla FC?

Q: Have they already explained you that the city is divided between the red and the green colours in the derby days?

A: Yes, they have told me something about it, but there is nothing better than just seeing things by yourself and as I said, I am at ease, there are many games before the derby and we are preparing them, when we get to the derby week, we will focus on that game.

Q: What would be the dreamt result for you in both derbies?

Q: To finish, What's the coolest or funniest thing that happened to you ever since you arrived at Real Betis?

A: Ever since I arrived at Betis… I think it was the hazing in the stage in Mexico, when they made me sing.