Man Utd won't win anything with this attack: Why Ole can't shut door on striker signing

COMMENT: Raphael Varane. Jadon Sancho. And £100m-plus spent. Great players. A great improvement. But they still won't get near it. Manchester United won't win the league with this attack...

United will kickoff this 2021/22 campaign in better shape than this time last year. Varane will lift the quality - and mobility - of United's back four. Sancho will offer the pace and ability to break lines that United have been lacking for so long. But up top? Well, that's a different story. And if United fail to act before this market shuts, it'll end up costing them - again.

Edinson Cavani will perform. He'll stun. He'll inspire. But he won't do it week-in, week-out. He can't. Not at 34 years of age. And certainly not at 34 years of age without any serious preseason in his legs. Marcus Rashford won't be seen until October - at the earliest. Again, he'll be another one with no preseason. And there's no telling how his body will react to this surgery. Indeed, for this column, there's doubts about Rashford's long-term potential as a genuine Manchester United No9.

So - as it stands today - it'll be odds and sods for the first weeks of the campaign. Manchester City could have Harry Kane through the doors in the coming days. Certainly a deal between Chelsea and Inter Milan has now been struck for Romelu Lukaku's return to London. Liverpool have a fully fit Diogo Jota to lean on. And even this season's Community Shield winners, Leicester City, are excited about what Patson Daka has shown in preseason. Every team around United will have a stronger attack than what they had last season. Again, Varane and Sancho will get United closer to the champions. But with no outstanding No9 to lean on, the story of this nearly enoughManchester United team threatens to repeat.

For the moment, there's a break. Intermediaries close to United stating there's been no soundings from the club about a striker pursuit. At least an aggressive one. They're involved. They're keeping tabs. But the public campaigning. The bold, forceful efforts that we saw waged against Borussia Dortmund and Real Madrid this summer. They're off the table. Unless things dramatically change, United will go into the new season with this current attack. 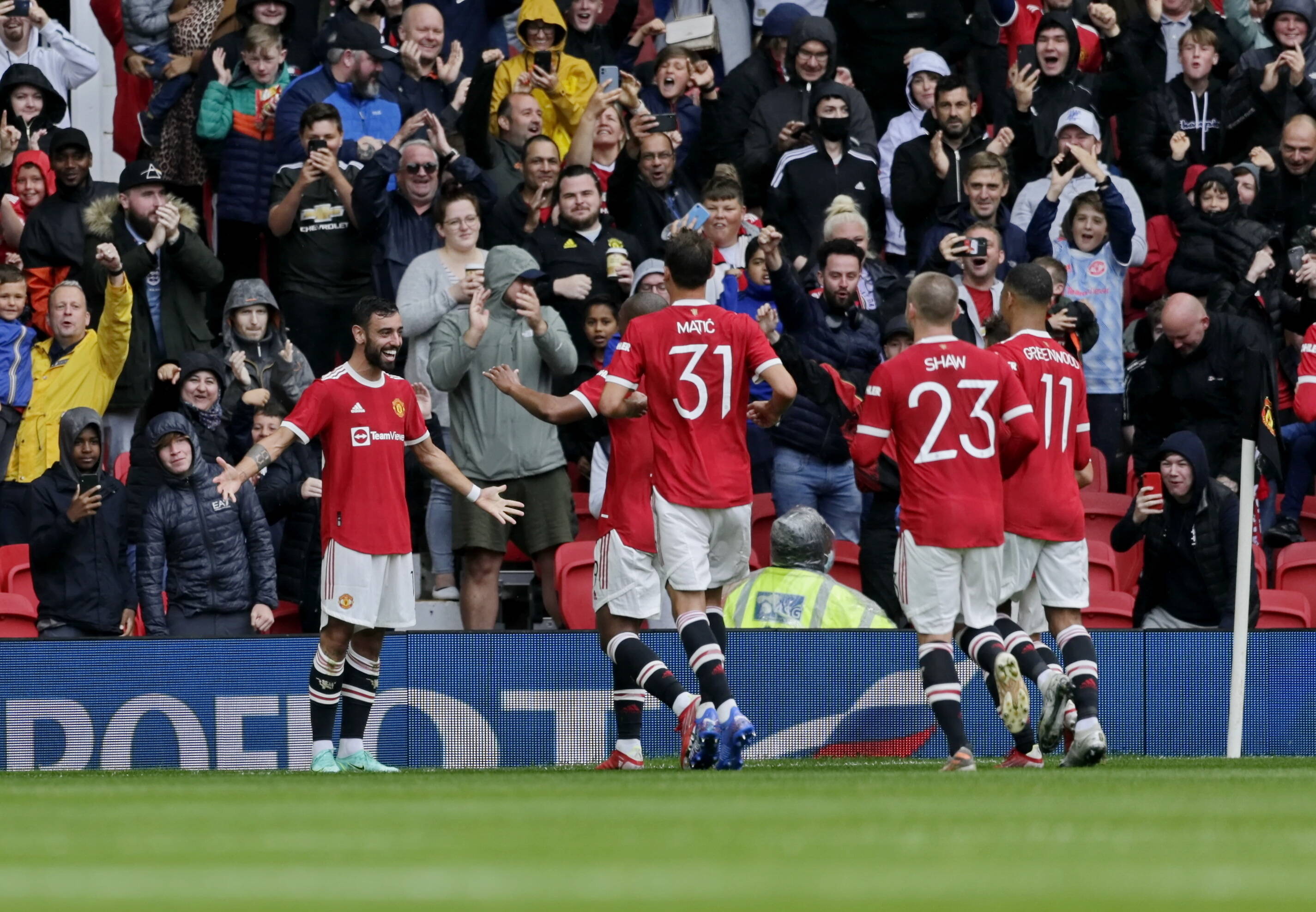 But to be clear, Solskjaer knows he needs more. The door is ajar. But it'll be something from left-field. Opportunistic. A bolter. The Norwegian wasn't playing bluff when he discussed the situation last week.

"Anything from now is a bonus," Solskjaer said. "I have to say that with the two signings we've got, we've strengthened where we wanted to strengthen.

"Let's see what happens. You never know in football. Anything can happen, ins and outs."

As it stands, the "outs" are the problem. Solskjaer needs to lighten the wage bill and swell the coffers if he is to make that late centre-forward swoop. As we mentioned, targets are being discussed. Kane. Lukaku. The feelers were sent out. But the response has been the same as City and Chelsea have found. It's cash - and cash only. United, as they did when offered Jack Grealish a fortnight ago, are willing to do business, but only if players can be included in the exchange.

So it's alternatives that are now on the white board in Solskjaer's Carrington office. Luka Jovic, for one, is again being discussed. A player with great potential. Still young enough to rediscover why Real Madrid paid €60m for him two years ago. But a gamble. At least from the outside. United know the Serb inside-out. They looked seriously at him while with Eintracht Frankfurt. They made an attempt 18 months ago - pre-Odion Ighalo. And Solskjaer and his staff have kept a watch on his situation ever since. It'll be a roll of the dice, but Jovic's price and availability has him front of mind inside Carrington HQ. As a player, Solskjaer rates him. He has everything United's manager wants in a centre-forward. The question is, given his problems in Madrid, can he handle the big stage? Was it Zinedine Zidane or temperament that failed him?

So it's not over. Solskjaer isn't ruling it out. As he states, "anything can happen". And there is work ongoing behind the scenes. He knows this team isn't the finished article. Far from it. But a lot needs to happen between now and deadline day for United to successfully address a weakness long identified by their manager.

Varane and Sancho will bring great improvement to this Manchester United team. But they still won't get near it. United won't win the league with their current attack...