Live streaming Man Utd vs Liverpool: how to watch every second of this massive clash

Manchester United will host their great rivals Liverpool on Monday night at Old Trafford with both teams in need of a victory.

Always full of passion and fury, this looming meeting promises all that and much more given the circumstances surrounding both Man United and LFC.

Traditionally the most anticipated clash in English football, this season's early meeting of the two Northwest giants have both teams in desperate need for a first win of the campaign.

And for fans around the world, we have great news for you wanting to stream the Premier League live.

No matter where you are around the world, access to a Premier League stream is just a few clicks away thanks to ExpressVPN. Geo-blocking is a constant problem for football fans wanting to see their favourite teams in action. But we will show you how ExpressVPN allows you to stream live games, match analysis and football news from anywhere in the world.

United are in crisis, with new manager Erik ten Hag yet to find his first point in the Premier League after dismal defeats to Brighton at home and away at Brentford. However, Jurgen Klopp's Liverpool haven't fared much better.

The Reds drew at Fulham in their opening game of the season before doing so again on Monday night at Anfield against Crystal Palace. Further concerning for Klopp was the red card shown to striker Darwin Nunez. The dismissal means the Uruguay international is suspended for Liverpool's trip to Old Trafford.

So stakes are high for both teams. At United, doubts are already emerging about Ten Hag's job security. While inside Liverpool, they know they're already losing ground on title rivals Manchester City after their back-to-back wins from their opening two games.

Watch Man Utd against Liverpool from any country with a VPN

Geo-blocking is often a problem that many face when trying to catch a Premier League live stream where content is restricted to certain countries, but a VPN allows you to do so with ease, both legally and safely.

A VPN is a service that allows you to securely relocate your device to any country to watch streams from anywhere in the world.

For its speed, ease of use and reliability to access streaming services, we recommend ExpressVPN. Using it will not just give you access to Manchester United vs Liverpool but also all football leagues including Premier League, Bundesliga, World Cup games, Serie A and streaming services like BBC iPlayer, ITV, Hulu and US Netflix. 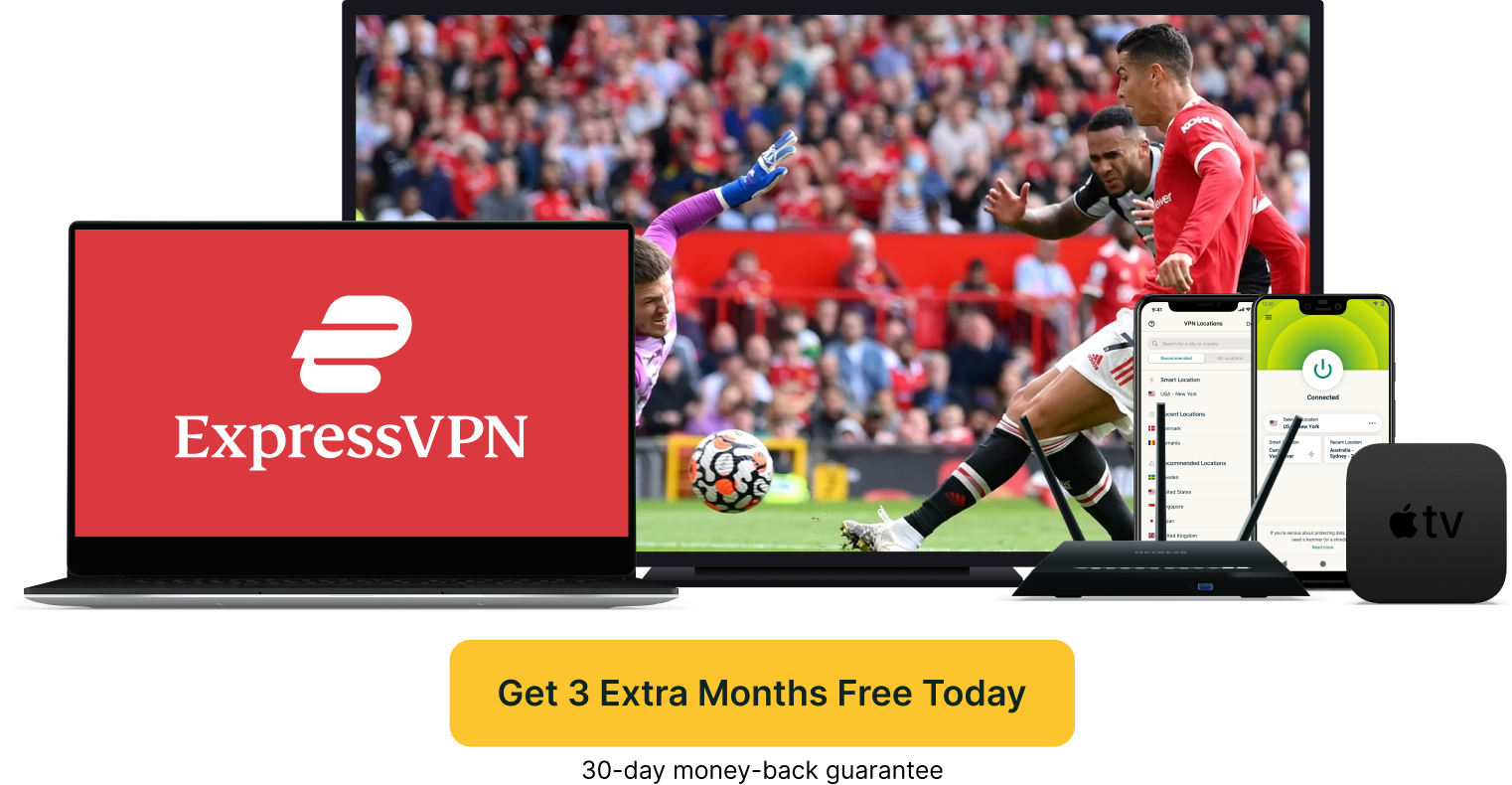 2) Select 'choose location', and choose the country location of the broadcasting stream you want to watch - it really is that easy

4) Enjoy the game, wherever you are in the world

Subscribe to ExpressVPN now to make the most of an extra three months free when you take out the annual 12-month plan (a saving of 49%!). All plans come with a 30-day money-back guarantee if you change your mind. Try it now, risk-free for 30 days, it's a no-brainer!

How to access Man Utd vs Liverpool live streaming in the USA for 2022/23:

In the USA, soccer fans can see every Premier League game across NBC's various broadcast and streaming platforms for season 2022/23.

On television, NBC and the USA Network will broadcast games. For Spanish language TV, Telemundo and Universo will cover the Premier League. And for streaming, Peacock, NBCSports.com and fuboTV will give fans full EPL streaming coverage.

Using a VPN you can easily access one off games streamed by NBC.

Simply connect to the VPN server and change your IP address to a US location. Then visit one of the streaming platforms listed above and create an account. Then simply log in and stream the Premier League live as much as you want.

If you're outside the USA and want to access these streams, ExpressVPN makes it so easy! Just follow the step-by-step guide above. 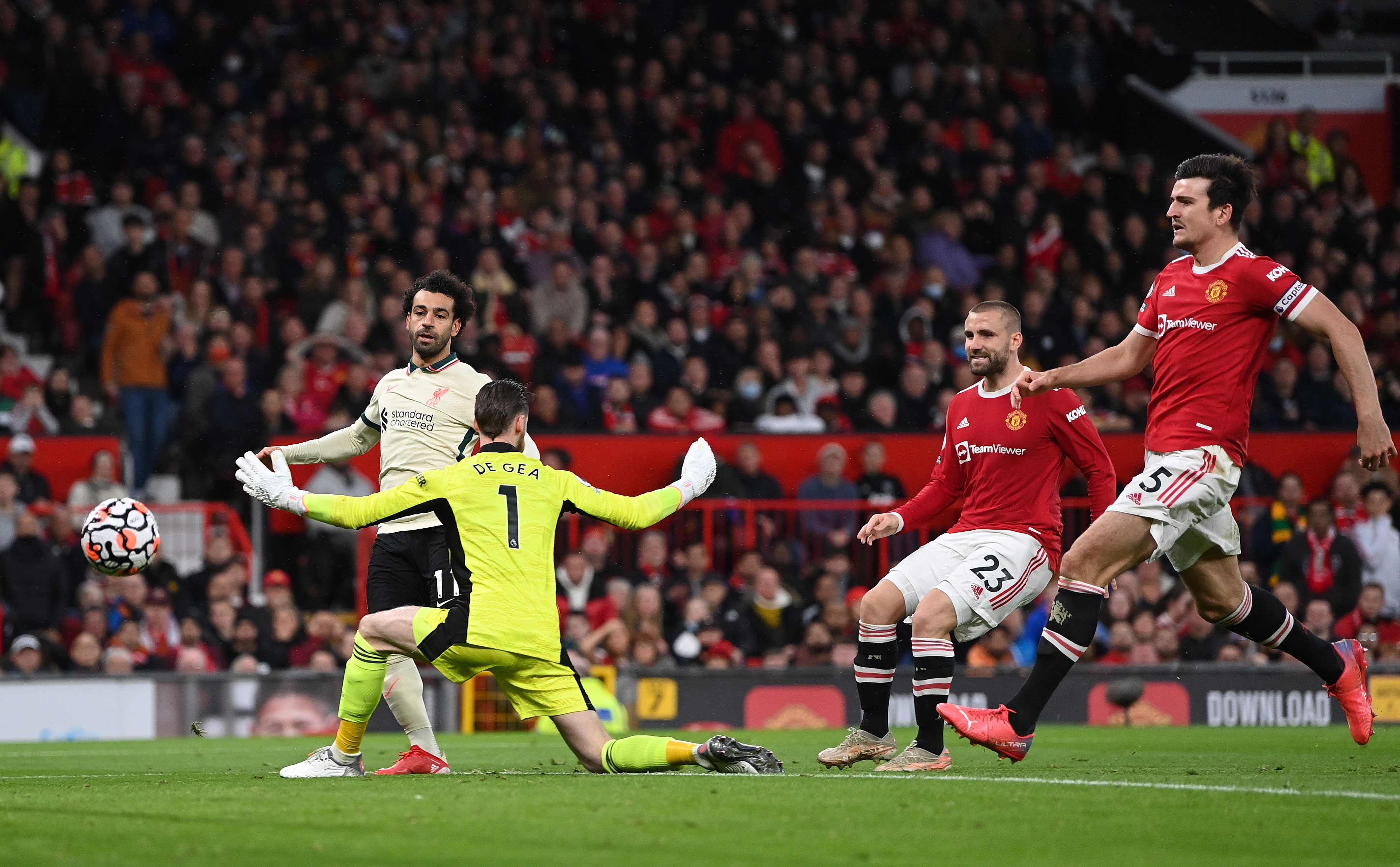 How to watch Man Utd vs Liverpool live in the UK:

In the UK, Sky Sports have exclusive rights for the Premier League season 2022/23.

Several platforms will be showing Premier League games live for season 2022/23 in the UK and the Republic of Ireland.

Using a VPN you can easily access games streamed by Sky Sports.

Simply connect to the VPN server and change your IP address to a UK location. Then visit the Sky Go website and create an account. Then simply log in and stream the Premier League live as much as you want.

If you're outside the UK and want to access these streams, ExpressVPN makes it so easy! Just follow the step-by-step guide above.

But that's what makes FuboTV Canada so appealing at $CAD25/month you can watch every single game (all 380) and anyone, anywhere can access it (with a VPN if not in Canada).

How to watch Manchester Utd vs Liverpool live in Australia:

In Australia, Optus Sport will show all the Premier League live for season 2022/23.

Using a VPN you can easily access one off games streamed by Optus Sport.

Simply connect to the VPN server and change your IP address to an Australian location. Then visit the Optus Sport website and create an account. Then simply log in and stream the EPL live as much as you want.

If you're outside Australia and want to access these streams, ExpressVPN makes it so easy! Just follow the step-by-step guide above.

How to watch Man United vs Liverpool live in Canada:

In Canada, fuboTV will show all the Premier League live for season 2022/23.

fuboTV is now the exclusive rights holder for the Premier League in Canada.

Using a VPN you can easily access one off games streamed by fuboTV .

Simply connect to the VPN server and change your IP address to a Canadian location. Then visit the fuboTV website and create an account. Then simply log in and stream the EPL live as much as you want.

If you're outside Canada and want to access these streams, ExpressVPN makes it so easy! Just follow the step-by-step guide above.

How to watch Manchester United vs Liverpool live in India:

In India, Star Sports hold the rights to the Premier League for season 2022/23.

Star Sports has exclusive streaming coverage of the Premier League in India and will stream games via Hotstar.

Using a VPN you can easily access one off games streamed by Hotstar.

Simply connect to the VPN server and change your IP address to an India location. Then visit Hotstar and create an account. Then simply log in and stream the EPL live as much as you want.

If you're outside India and want to access these streams, ExpressVPN makes it so easy! Just follow the step-by-step guide above.

For both sets of supporters, when Manchester United meet Liverpool it is always their biggest game of the season. No matter their position on the Premier League table, their form or the talent on the respective team sheets, nothing is taken for granted when United meet the Reds.

Even the trophy count can spark debate, as while Man Utd boast a superior number of domestic league titles - 20 to Liverpool's 19 - LFC have been crowned European champions as the winners of the Champions League or European Cup six times compared to the three won by Man United. Two of those three were achieved by United's former manager Sir Alex Ferguson.

In terms of their head-to-head record, Manchester United boast a clear superiority. United have 81 wins to Liverpool's 70; the remaining 58 matches have finished as draws.

However, Liverpool go into this clash the undoubted favourites, particularly based on recent success. While United haven't won the Premier League since Ferguson's retirement in 2013, Liverpool have been both Premier League and Champions League winners under Klopp. 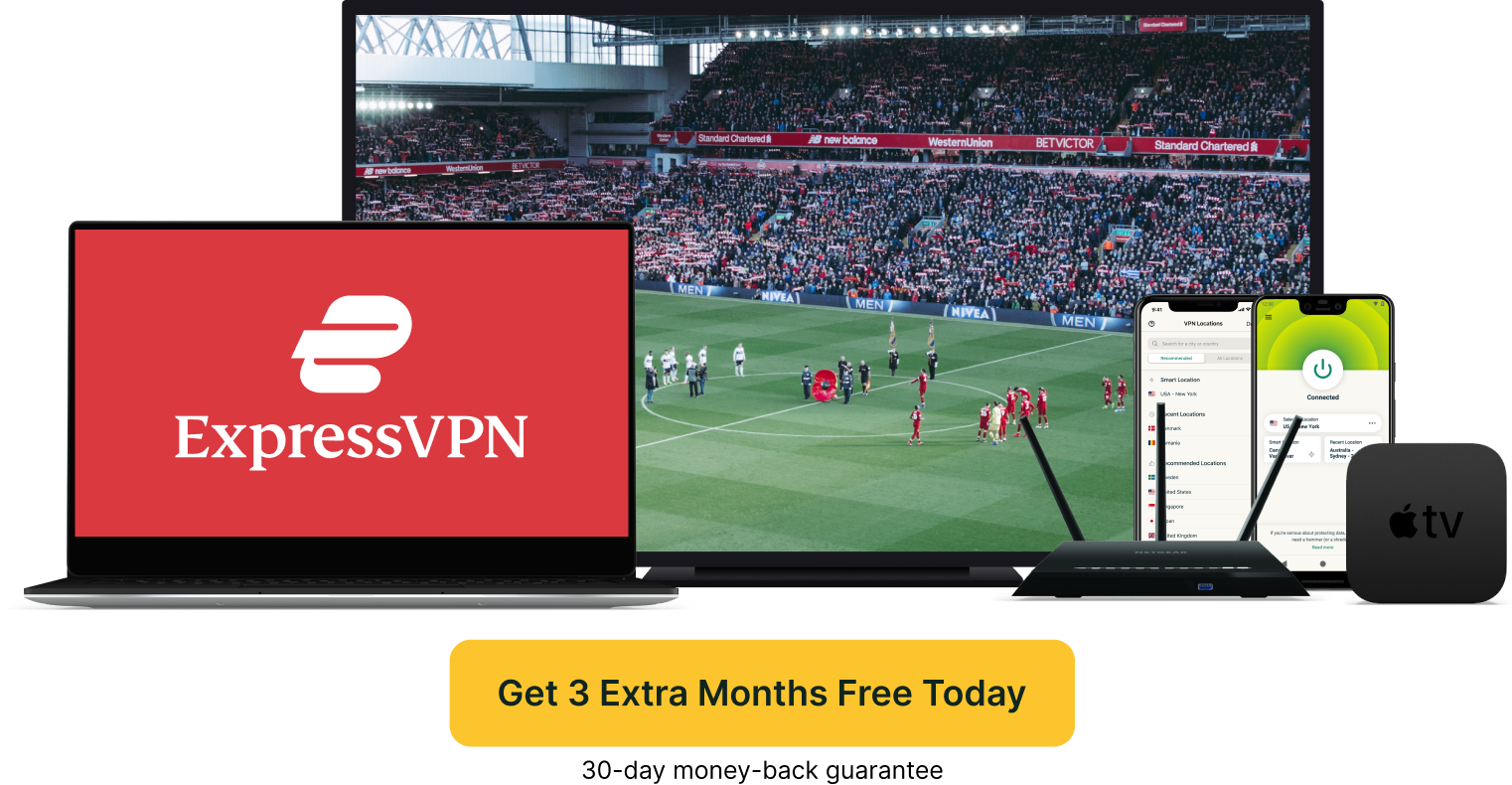 UK broadcasters Sky Sports, BT Sport and Amazon Prime Video will stream the Premier League online to the tune of over 200 matches this season. And with ExpressVPN it's so easy to catch an EPL live stream from anywhere you are in the world. It's as simple as:

2. Connect to a server location that's nearest to you

Using ExpressVPN and a server in the UK to access English coverage of the Premier League allows you to stream and experience the top of the English game wherever you are. 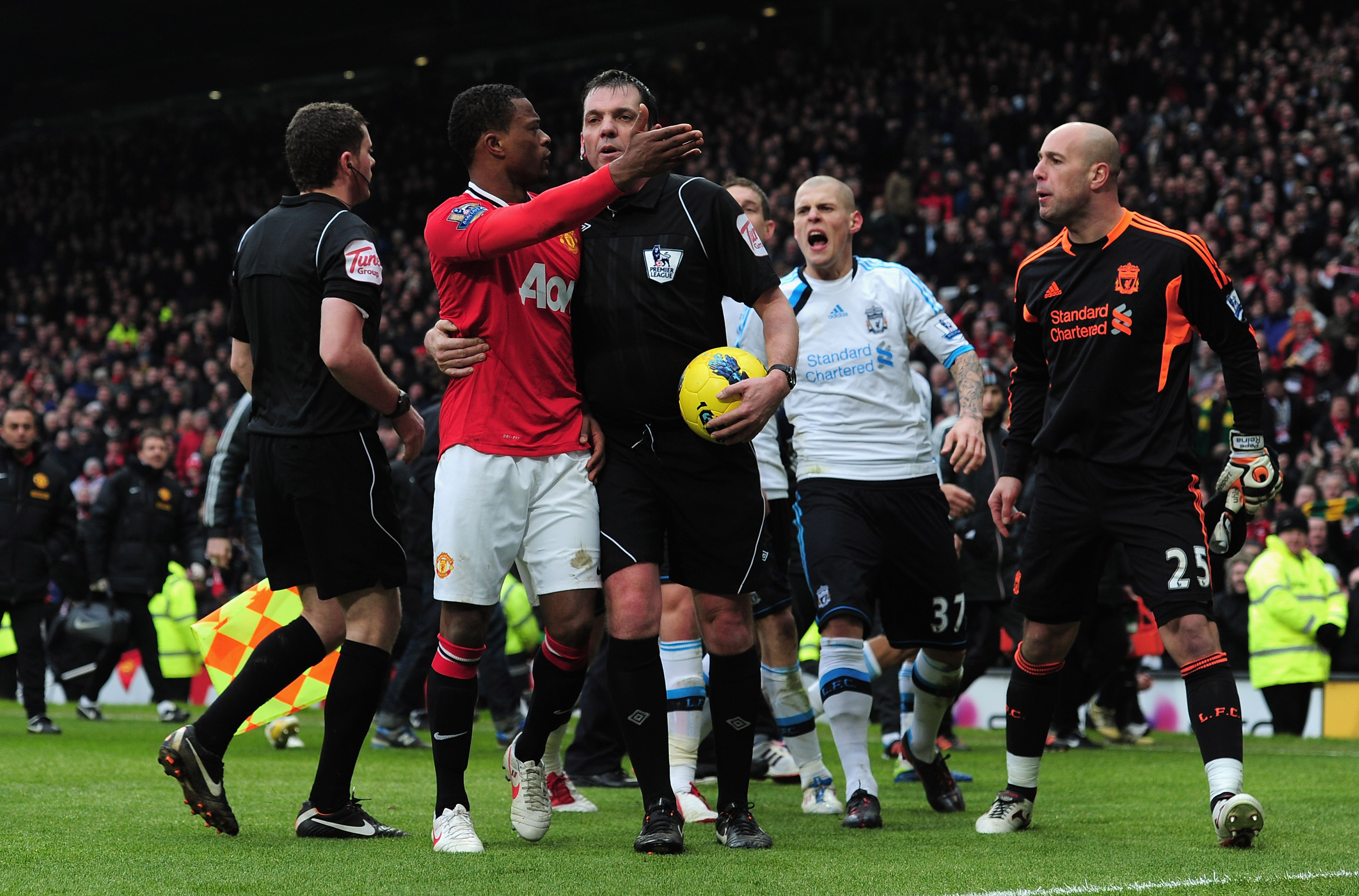 When will Manchester United vs Liverpool be held in 2022/23?

Manchester United will face Liverpool in the Premier League at Old Trafford on August 22, 2022.

When will Liverpool vs Manchester United be held in 2022/23?

Liverpool will face Manchester United in the Premier League at Anfield on March 5, 2023.

When did Manchester United and Liverpool first play eachother?

The first time Liverpool faced Manchester United in a competitive game was in 1894. Known as a 'test match', the meeting was essentially a playoff between the team which finished bottom of the First Division and the winners of the Second Division.

Man Utd were then known as Newton Heath and faced Second Division champions Liverpool in a play-off at Ewood Park. Liverpool won 2-0 to reach the First Division and relegate Newton Heath.

Has any player ever moved between Manchester United and Liverpool?

Phil Chisnall remains the only player to move directly between the two clubs. The winger switched from Liverpool to Manchester United in 1964. Liverpool did make an attempt to sign Gabriel Heinze from Manchester United in 2007. The Argentina international defender had agreed to make the move, but was ultimately blocked by Sir Alex Ferguson. Heinze would eventually be sold to Real Madrid. 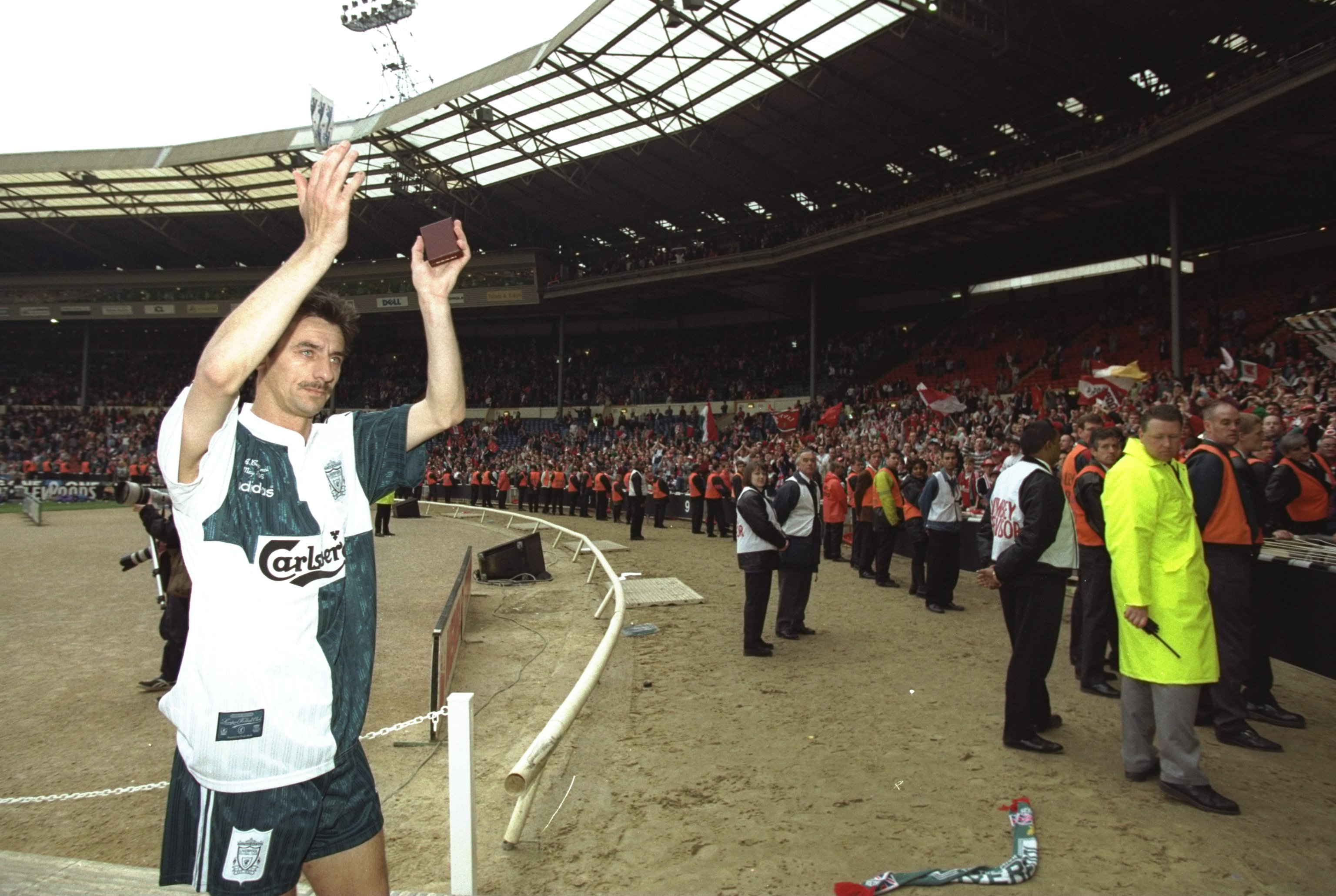