Havertz: Chelsea fans expected me to be new Ronaldo

With Euro 2020 about to kick off, we at Tribal Football will be breaking down the runners and riders. We will analyse the tactics, key players and plot out each team's chances of success, starting today with four outside contenders. They aren't the favourites, but with some momentum and a bit of luck, they could mount a challenge...

At 35 years of age, Modric remains Croatia's captain and the heartbeat of their possession game. The Real Madrid man can play-make from deep, with great skill and passing range, and also get forward to support the attack. It's important that he stays fully fit on the back of a long and gruelling club season, while Perisic will be a crucial source of pace and directness in a forward line otherwise lacking verve.

Tactical overview: 4-3-3 with lots of possession

Croatia are a highly technical team. They will likely line up in a 4-3-3, with Modric and Marcelo Brozovic in the centre of midfield. The third man alongside them could be Mateo Kovacic or the more attacking Nikola Vlasic, depending on the opponent and situation. 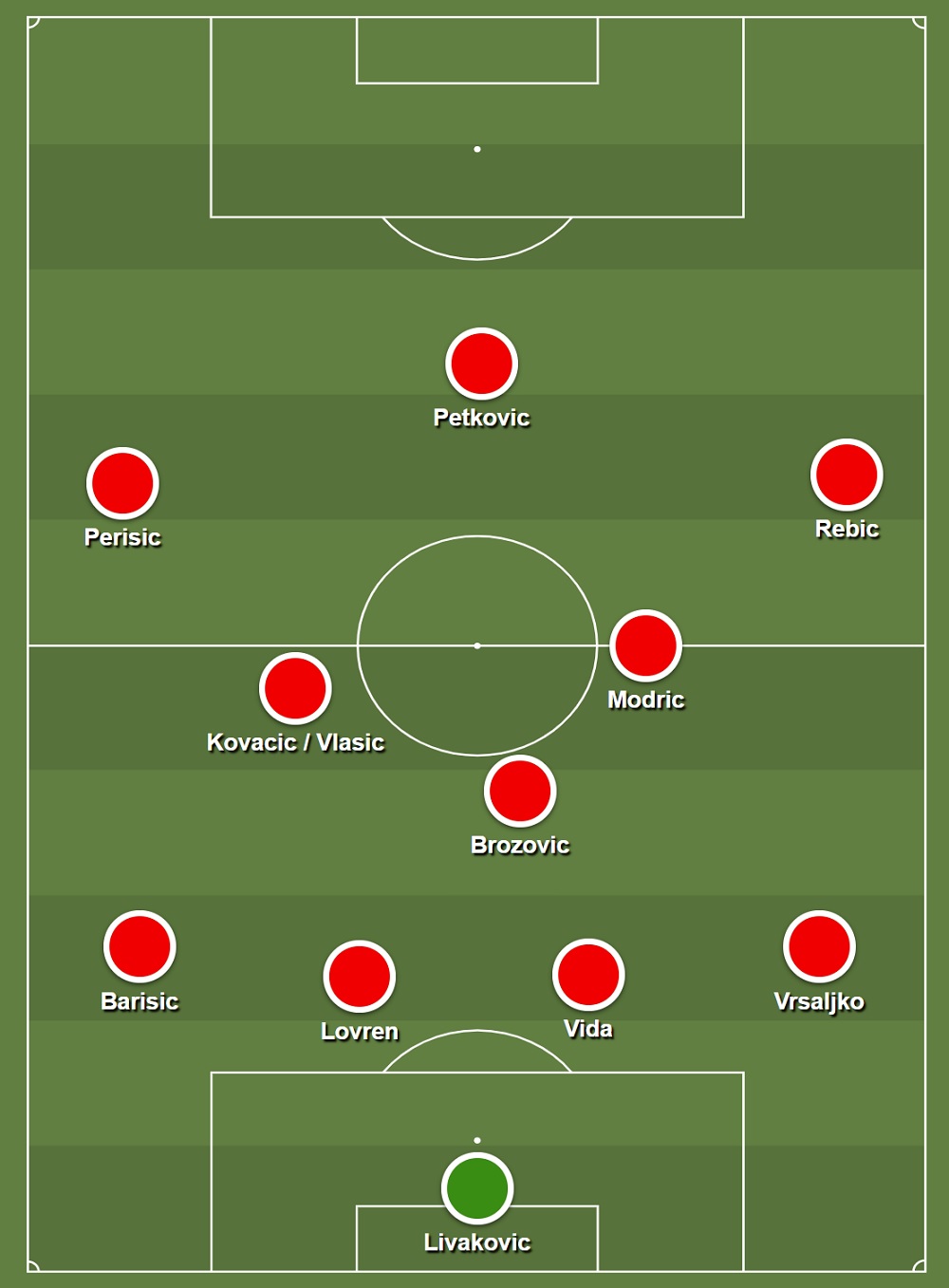 Keeping hold of the ball is one of Croatia's strengths, as they try to control the tempo of the game. In Modric and Kovacic they possess two of the world's finest midfielders when it comes to playing under pressure. Opponents will find it hard to rush them into turnovers. However, they can be complacent in build-up and there is a real dearth of cutting edge up front.

The retirements of Mario Mandzukic and Ivan Rakitic have left the side lacking dynamism going forward. Perisic and Ivan Rebic can contribute from the wide positions, but a lot of responsibility may fall on the shoulders of Bruno Petkovic, who is yet to prove he can score consistently at this level.

Croatia are in a tough group with England, Scotland and the Czech Republic. They may find it hard to consistently match up with their opponents physically. However, they should have enough to make it through the group and into the knockout stages, either in second or as one of the best third-placed teams. A quarter-final finish isn't impossible, but anything beyond that would be a surprise.

Italy boss Roberto Mancini has brought in a lot of young talent over the last few years, but his defence is still built on experience. Chiellini, at 36, has been representing the Azzurri for 17 years and has played at four major finals. His leadership and reading of the game will be key in guiding those around him. By contrast, Immobile will be hoping to make his first real impact at an international tournament after years of exceptional scoring form at club level.

Mancini has made changes in tactics as well as personnel. Out has gone the back three, in has come a back four, along with a more possession-based of football. This Italy side can retain possession and like to build controlled attacks along the ground, with wide men that come inside to help them break the lines. 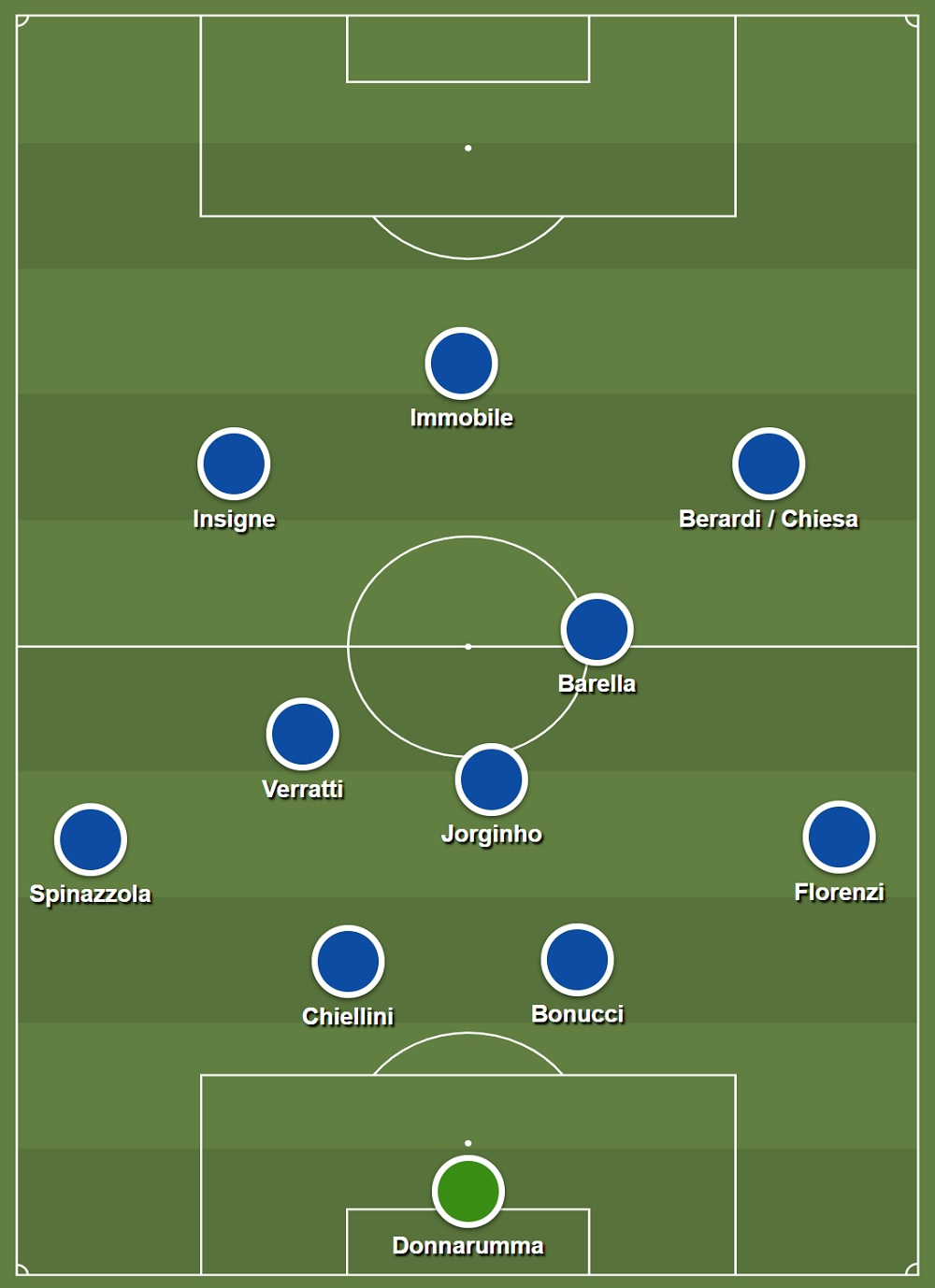 When they have possession, the 4-3-3 becomes more of a 2-3-5 as both full-backs push high. That allows players like Lorenzo Insigne and Domenico Berardi to come inside and play closer to Immobile, whose movement in and around the penalty area is superb. Marco Verratti will likely be the team's fulcrum, with possession moving through him, while Nicolo Barella offers more dynamism, moving wide and hitting the box.

While this Italy side are more comfortable on the ball and possess a number of different types of goal threat, they do lack one consistent finisher. Immobile hasn't always taken his club form to the international arena. There may also be concerns about an ageing central defence, with Chiellini next to 34-year-old Leonardo Bonucci, and the lack of protection they get with advanced full-backs and a lightweight midfield. Defending counter-attacks could get problematic.

Italy are favourites to top Group A, though there are no easy games against Turkey, Switzerland and Wales. That could put them into a winnable second round game against, say, Austria or Ukraine. Afterwards it gets tougher, with Belgium potentially awaiting in the quarters. Mancini has built a real team, but absence of individual star power may hurt them just as it did at Euro 2016, where Antonio Conte's well-drilled side fell to a more talented Germany in the last eight.

Manager Frank de Boer has turned to a three-man back line with De Vrij at the heart of defence. De Vrij was a key member of the Dutch 2014 World Cup team, which made the semi-finals playing a back three. They will need his organisational skills to keep clean sheets, while Depay will provide the creativity and scoring threat. Depay has a free role in De Boer's 3-5-2, dropping off to link play and running behind from deep. Set to move on from Lyon this summer, Euro 2020 could be a showcase tournament for the 27-year-old.

The Netherlands have played a back four and a back three in their warm-up games, though the three looks to be De Boer's preference going into the tournament. He will be hoping the extra defender masks the absence of Virgil van Dijk - the team's most commanding centre-back is unavailable due to injury. 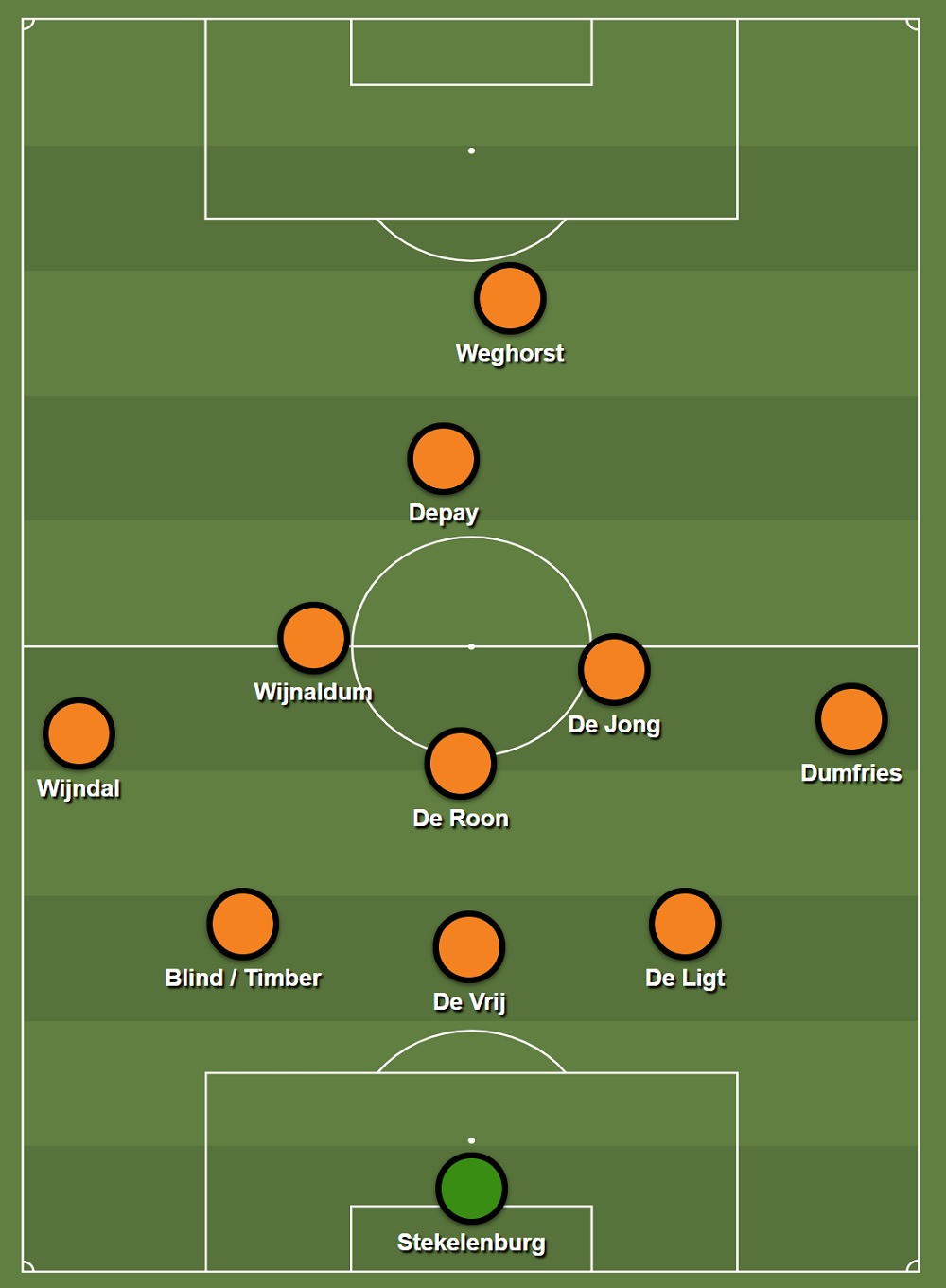 Wout Weghorst, standing at 6ft 6in, has the presence to occupy defenders, but a lot of the goal threat is likely to come from those moving underneath or beyond him. Depay wanders to find pockets, link attacks and make things happen, while Georginio Wijnaldum makes great runs from midfield and offers scoring threat on crosses. All of this, combined with the powerful runs down the right of Denzel Dumfries, means the Netherlands always have someone causing problems off the ball.

However, the injury to Van Djik has hit an already shaky defence. The Netherlands haven't kept a clean sheet against strong opposition for a while. They conceded two against Scotland recently and four against Turkey in March. This will probably kill their hopes of going deep in the tournament.

They may be suspect defensively, but the Netherlands should have enough to beat Austria, Ukraine and North Macedonia to top spot in Group C. Assuming they do, a third-place team awaits in the second round. The draw has been kind, but that won't be enough to get them beyond the last eight. Still, Depay in a free role at a major finals will be immensely fun to watch.

Yilmaz is Turkey's captain and, fresh off a Ligue 1-winning season with Lille, he is in form. He banged in a goal every 129 minutes in the French top flight and plays with surprising athleticism for a 35-year-old striker. He will lead the line, with support coming from Calhanoglu. A pinpoint passer who offers a shooting threat from outside the box, Calhanoglu can also be devastating from set pieces.

Senol Gunes, who previously led Turkey to the 2002 World Cup semi-finals, sets the team up in a 4-2-3-1 that defensively becomes more of a 4-4-2, with Yusuf Yazici supporting Lille teammate Yilmaz in the frontline. They don't put on a lot of high pressure, but they do keep their shape and can be tough nuts to crack. 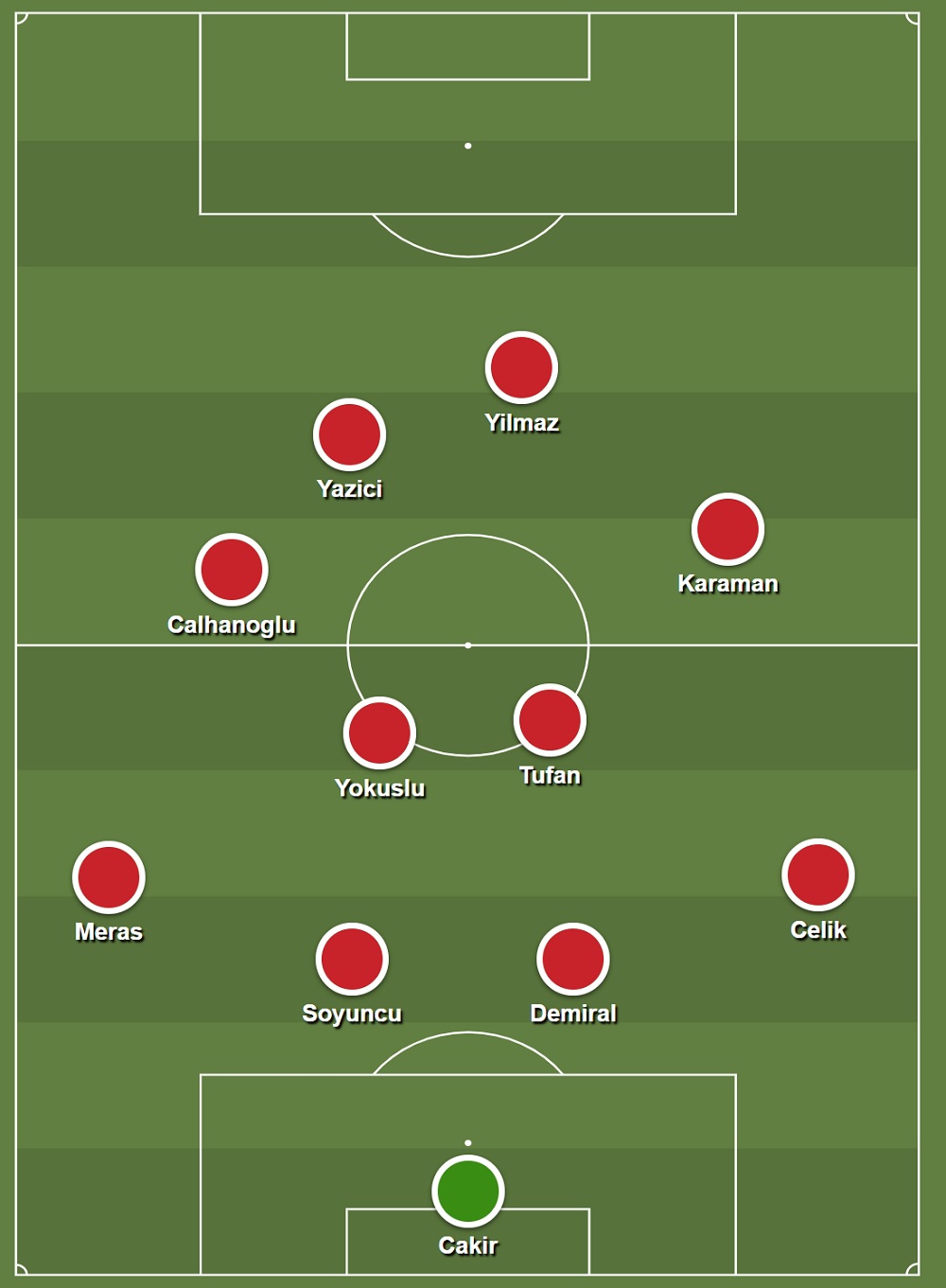 Turkey can mix and match, varying between defend-and-counter, patient possession and more direct play based around a tall frontline. Both Yilmaz and Kenan Karaman are over 6ft and can win the aerial duel, but Yilmaz can also come short and contribute to neat interplay through midfield.

The centre-backs are playing at a high level for their clubs, and possess plenty of pace and aggression. However, they can make individual errors. There is only so much protection the system can afford them, and stronger nations with top class attackers may exploit this weakness.

It's worth noting that Turkey have only kept five clean sheets in 14 games over the last two years. They conceded three goals against Germany, Croatia and Lativa, two against the Netherlands, Hungary, Russia and Serbia, and recently conceded in a friendly win over Azerbaijan. They're organised, versatile and have plenty of firepower, but there's a limit to how many opponents they can outscore.