Liverpool humiliated Manchester United with the handbrake on, Nuno is struggling to meet expectations at Tottenham and Phil Foden dominated Brighton - here are five lessons we've learned from the weekend's Premier League round:

What is there left to say about this disorganised Manchester United team? Ole Gunnar Solskjaer simply isn't good enough and hasn't been for three years. He is incapable of coaching with anything like the tactical detail and organisation of his peers, and finally – thanks to the disrupting influence of Cristiano Ronaldo – this view has gone mainstream. He is now odds-on favourite to leave next, and while the board will likely stand by him for a while yet it is only a matter of time.

The chief concern on Sunday was how United pressed in ones and two, erratically, manically, and with zero coherence. For the first goal, Mason Greenwood inexplicably charged down the ball, moving too far out of his base position, before Aaron Wan-Bissaka made the same error later in the move. Gaps appeared all over the pitch in a domino effect and Liverpool eased into the lead. Something similar happened for the second and third goals.

In years gone by, Solskjaer has managed to pull off a big win just at the point of crisis, but not this time. That's because he has abandoned the deep-lying, counter-attacking system he used to deploy for big games like this in favour of an attacking and confrontational approach. The problem is that he is not coaching his players how to do the latter, and so inevitably United are disastrously open and disjointed. Had Liverpool actually played well, this could have been 10-0.

If all that wasn't bad enough, a serious discipline problem developed in the game. Bruno Fernandes, Ronaldo, and Harry Maguire should all have been sent off before Paul Pogba's red card. If this indicates the dressing room is starting to turn on Solskjaer then he doesn't stand a chance. Things are about to get really ugly.

Brighton's half-time formation change to a diamond 4-4-2 led to an improved second-half performance in which their hard pressing caused Manchester City a few problems, but this match was over long before then – thanks to the overly-complicated system Graham Potter had deployed from the start.

Nominally a 3-5-2, Pascal Gross often dropped out of central midfield to follow a Man City runner and create a 4-4-2, while in possession Brighton swung into a complex shape that looked to create passing triangles through midfield. Unfortunately, all it really did was leave two Brighton central midfielders covering a very large area of the field, and so once Man city pinched the ball they could attack sharply through big patches of grass in the number ten space.

Phil Foden's brilliance was an important factor, with Pep Guardiola's striker-less system causing an overload in midfield as Foden dropped off the front line to run the game. Man City are back to their ruthless best; it is a mistake to do anything other than compress space in your own half and hope for chances on the break. 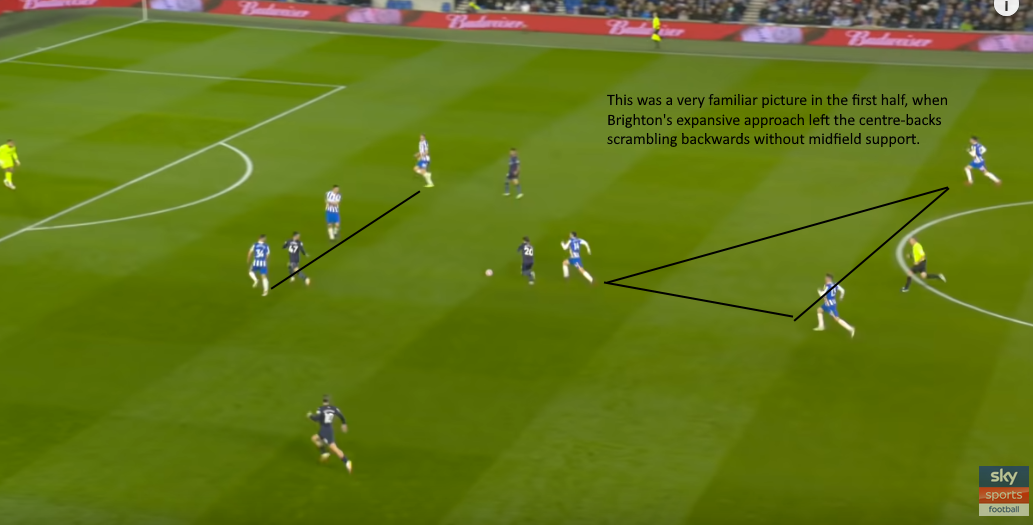 3) Spurs don't seem to have an attacking plan under Nuno

Tottenham Hotspur failed to have a single shot on goal in the second half at West Ham. That is an extraordinary statistic, especially with Harry Kane, Heung-Min Son, Lucas Moura, Bryan Gil, and Steven Bergwijn having all been on the pitch at some point. Nuno Espirito Santo's side frankly looked like they had no plan, no idea of what the manager wanted them to do.

There was always the danger that Nuno was another Jose Mourinho, someone who doesn't have the capacity to work on attacking interplay or build-up and instead expects his players to improvise these aspects of the game. After years of this under Mourinho, we know it doesn't work in the modern game, when opponents are too savvy to Spurs' threat to give them space to attack individually.

Nuno is discovering that the approach he used at Wolves, who were able to play on the counter-attack by opponents expecting to dominate possession, does not translate to a big club. Tottenham's midfielders are jogging about the pitch, disconnected and hesitant. It suggests they will be changing manager again very soon. 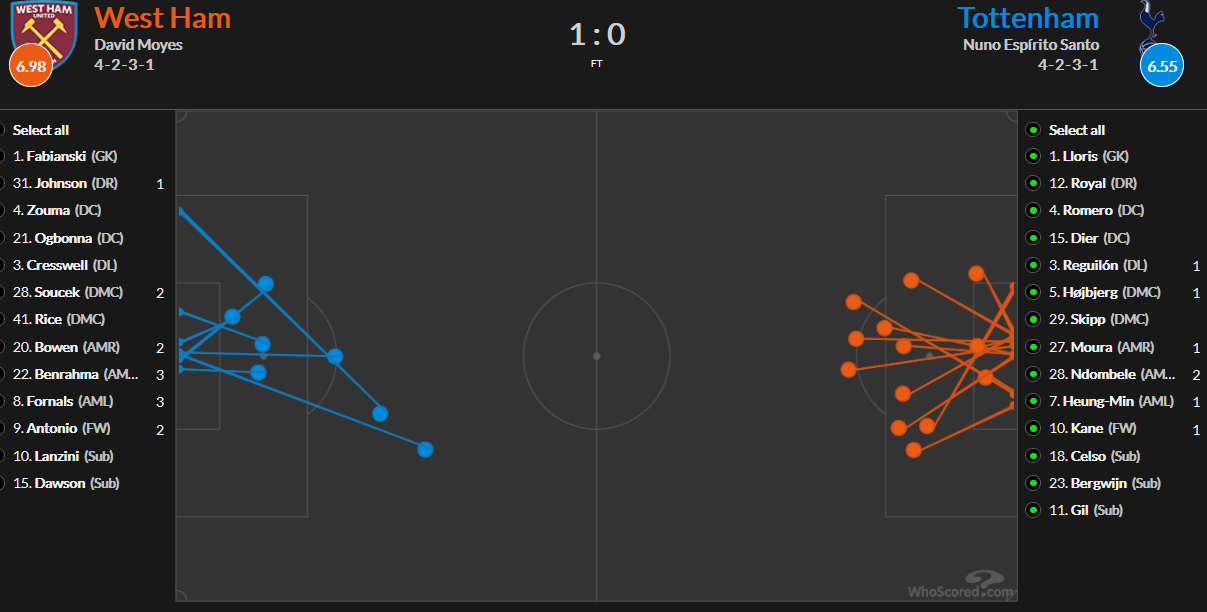 4) Weary Leeds could be in serious trouble

Leeds United have just ended a run of games against bottom-half clubs and emerged with five points from five games, a record that leaves them in the relegation zone and potentially facing a harsh winter. Marcelo Bielsa's team are hitting similar numbers to last year defensively – their PPDA and challenge intensity remain the best in the country – but this is not leading to goals in attack, most likely because opponents are now sitting a little deeper against them and taking fewer risks.

People often suggest that Leeds will burn out, become weary of Bielsa's methods as teams have done in the past. But while that hasn't happened yet, Leeds do seem somewhat jaded in the final third: they have only scored five goals this season and two from open play. Patrick Bamford has lost his goalscoring touch.

It is too early to panic, although Leeds rather huffed and puffed through a 1-1 draw with Wolves at the weekend and were ultimately saved by a last-gasp penalty. Soon, heads will drop. And that is when Bielsa teams tend to unravel.

Aston Villa were absolutely hopeless at the Emirates on Friday night and for the second time in three Premier League matches Dean Smith found himself switching the 3-4-1-2 out for a back four. Surely now, after so many poor performances, he will get rid of the system that is causing the team to fall apart.

The back three leaves Villa without any real wide options - the wing-backs are struggling on their own, leading to clunky performances in which the team cannot build from the back – and a strike partnership that has very little chemistry. Neither Danny Ings nor Ollie Watkins work as a two, and increasingly it feels as though Smith is cramming square pegs into round holes.

Villa need to get back to basics, back to a shape they instinctively understand. Any further experimentation with the 3-4-1-2 might just end in a relegation scrap.