This game was every bit the tactical chess match we anticipated, complete with surprise formations and in-game tactical tweaks as Thomas Tuchel and Pep Guardiola engaged in a high-brow tussle at the Etihad. The Manchester City manager appeared to land the first blow with his shock 3-1-4-2 formation in which wingers Ferran Torres and Raheem Sterling essentially split the difference between playing as free eights and inside forwards.

For a short while, Chelsea couldn't get to grips with their unusual positioning as Rodri spread confusion as the sole central midfielder on the pitch. Sterling frequently found pockets of space on the inside left, occupying the zone on the outside of Chelsea's two-man midfield and running the game from there. Man City were decisively on top, but that all changed within the first 20 minutes as Tuchel, scanning frantically for solutions, dropped Timo Werner onto Rodri.

Chelsea went more man-to-man through midfield than they usually would: with Werner now sat on top of Rodri, N'Golo Kante and Billy Gilmore were now free to spread wide to track Sterling and Torres. It shut City down, creating the tense and cautious tactical battle we had expected before the team sheets came out. 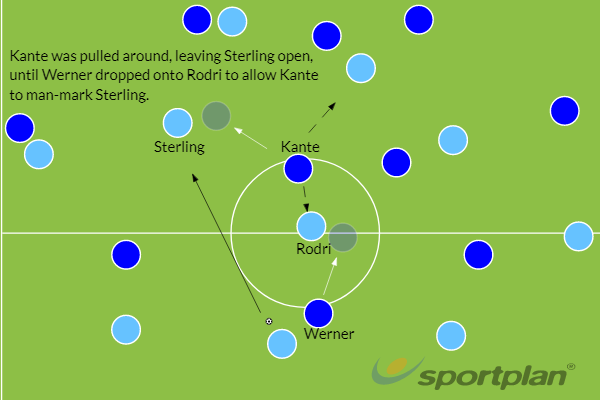 In the second half it was again Tuchel who out-thought his opposite number. Chelsea's inside forwards had been unable to get into the game in the first 45 because Gabriel Jesus dropped to make a narrow three-man wall alongside Sterling and Torres when Chelsea had the ball – cutting off the passing lanes through to the forwards.

Tuchel responded by instructing Christian Pulisic and Hakim Ziyech to drop deeper after the break, meaning Chelsea crowded the space around the three-man wall to get playmakers in possession. It helped Chelsea build through the pitch, although it probably wouldn't have made much difference without a general upturn in tempo from the visitors – characterised by the advancing roles of Reece James and Marcus Alonso.

James in particular went on the attack, beating Benjamin Mendy repeatedly to force Man City onto the back foot. Yet again it was Tuchel, not Guardiola, who took the initiative, bringing Callum Hudson-Odoi on as a right winger to capitalise on Mendy's vulnerability and go for the kill. It worked brilliantly as Hudson-Odoi made the pre-assist for Alonso's winner. 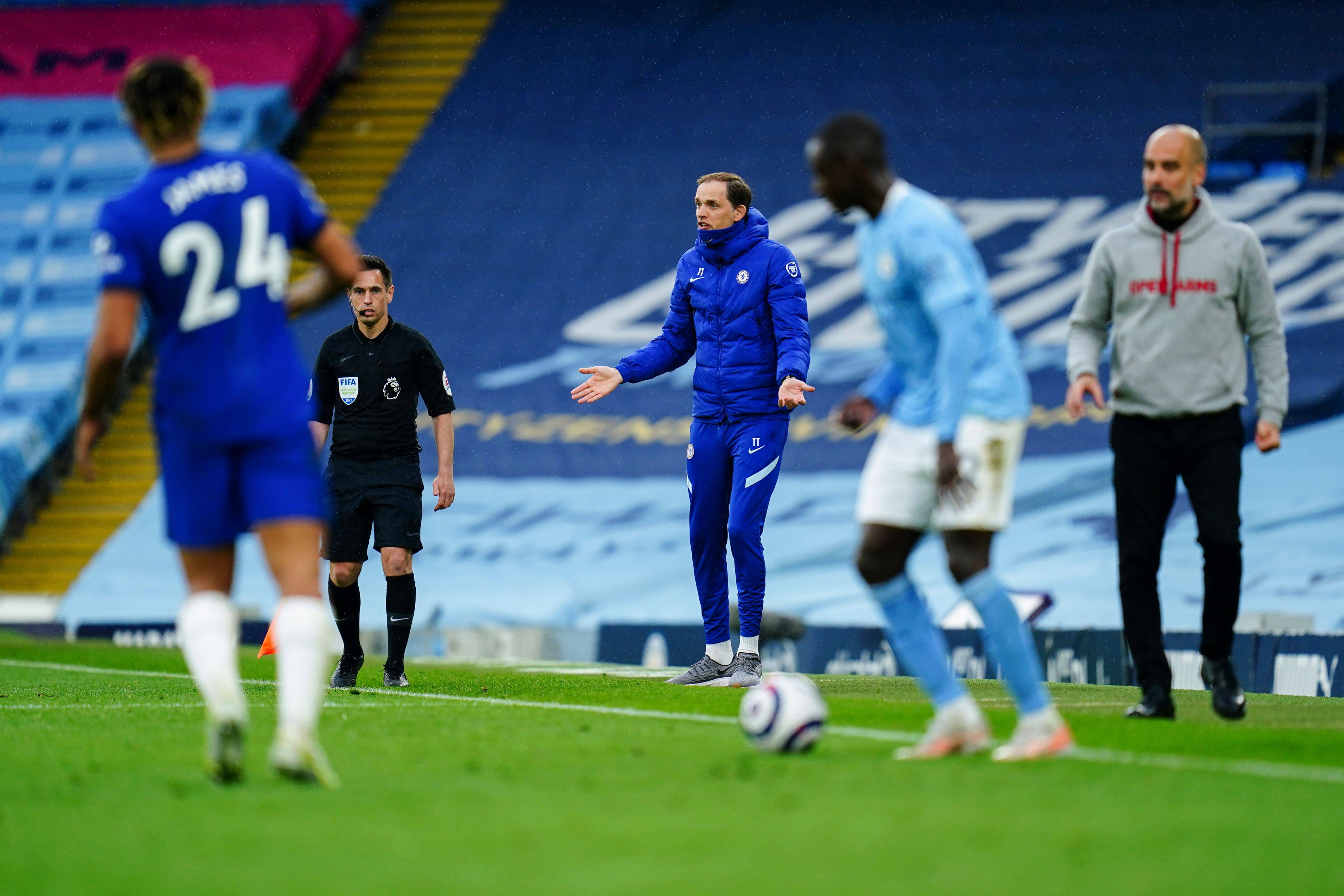 Analysis of this game might have been very different had Harry Kane's disallowed goal been called the other way, as it so easily could have been. The move typified Tottenham's tactical pattern in the early portion of the game and one that had created numerous chances: Heung-Min Son was instructed to drift into central positions from the left to take advantage of Leeds United's tendency to empty midfield.

However, by the end of the game Leeds had dominated and deserved their win, thanks largely to the fact Ryan Mason's 4-2-4 formation was simply too attacking for a team as high-pressing and energetic as Marcelo Bielsa's. In time, there is no reason why the team Mason picked could not work, but having barely had a chance to implement his plans on the training ground Spurs were far too porous in this system.

A two-man midfield, with little support from wingers Son and Gareth Bale, left Tottenham completely open to Leeds' quick breaks. Jack Harrison and Ezgjan Alioski easily dominated the left flank as Bale failed to do his defensive duties, leading directly to the hosts' second goal and numerous other chances. More importantly, with so few players in defensive areas Leeds were able to charge straight through the middle: 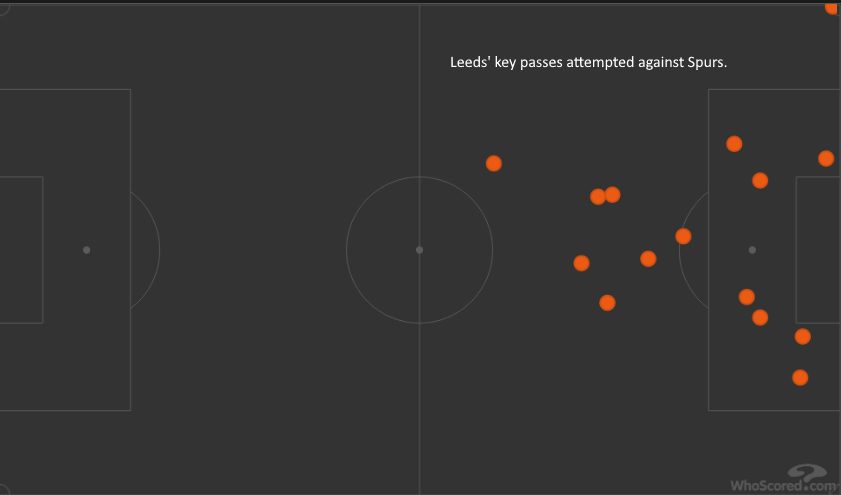 Sadly, it looks increasingly likely that Chelsea, Liverpool, and the Manchester clubs will take the Champions League spots despite a season in which Leicester City, West Ham, Everton, and Aston Villa all harboured realistic ambitions at one point or another. The brutal lesson we have learnt, from this weekend in particular, is that the superior squad depth at the 'Big Six' clubs makes it almost impossible to beat them over 38 games.

In West Ham's defeat to Everton, defined by a mistake by Craig Dawson, we saw the impact of Declan Rice's absence. The hosts just couldn't get a firm grip of the contest in midfield, while Dominic Calvert-Lewin's goal was thanks to a gap in midfield that would not have been there if Rice was playing.

In Leicester's defeat to Newcastle United, in which Steve Bruce's side counter-attacked ruthlessly through a disorganised back three, we saw what happens when their defensive leader – Jonny Evans – is absent. It generally only takes one key player to be absent for the under-dogs to come up short. 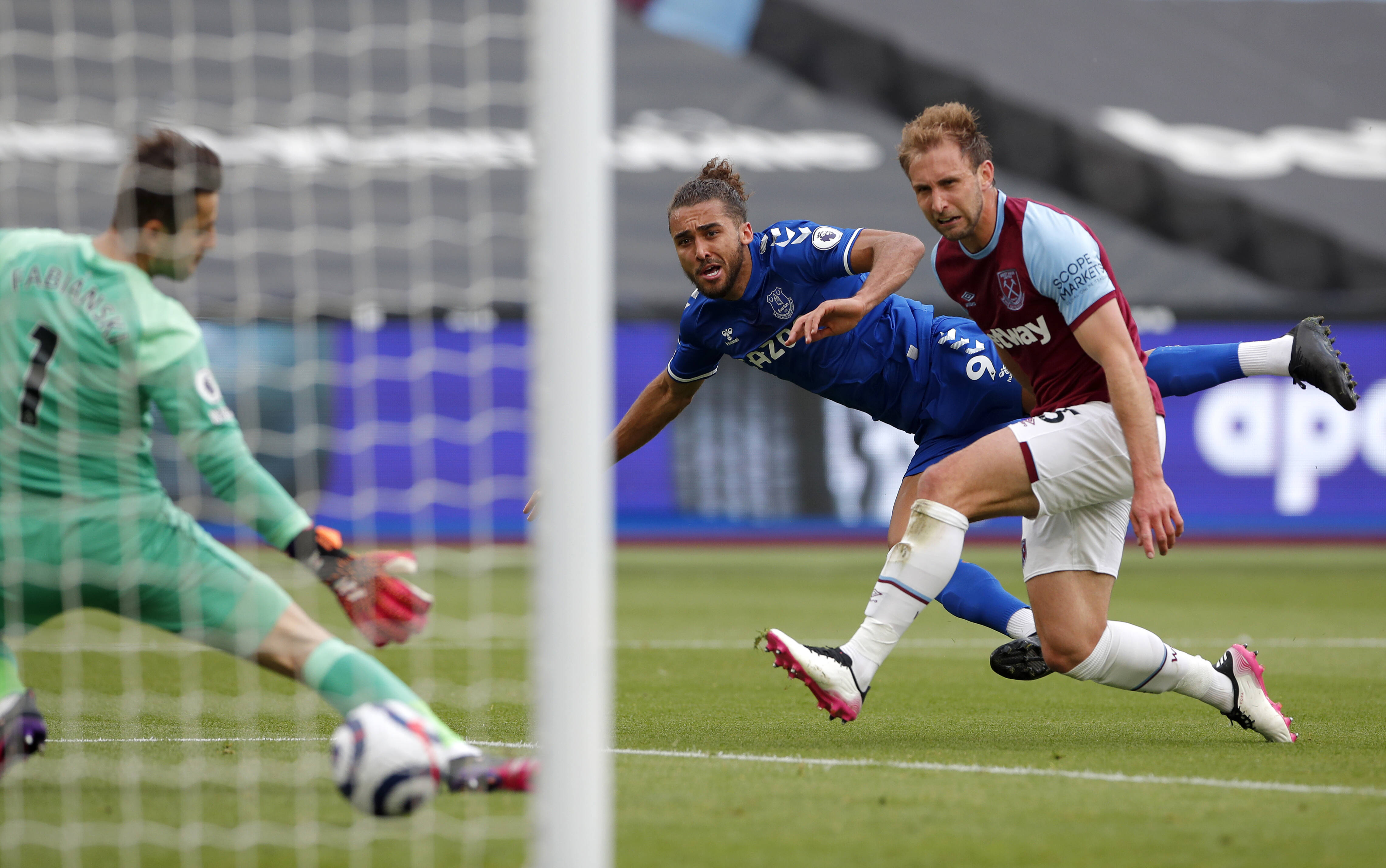 It became a routine win for the visitors, although there was one other interesting tactical note from this game. For the final 15 minutes Dean Smith played a very attacking 4-2-4 with dual target men, Wesley and Keinan Davis, leading the line and Ollie Watkins and Traore on the flanks. It was a bizarre system that aimed to ruffle United's feathers with their physicality, particularly around the weak Victor Lindelof, and it nearly worked.

Ultimately Man Utd were just too strong for Villa, but nevertheless it was intriguing to see Smith try something a little different. Wesley's return from injury gives Villa more options up front next season; maybe we will see a little bit more experimentation in 2021/22.