Ziyech? Kante? How Lampard has found his perfect Chelsea line-up for title challenge

Chelsea strung consecutive Premier League wins together for the first time this season prior to the international break. After a 3-0 win away to Burnley, they defeated Sheffield United 4-1 at home. Seven goals, six points, and Frank Lampard may have found his favourite line-up in the process. Here, we at Tribal Football break down his selection changes and how they influenced Chelsea's performances.

N'Golo Kante has started every Premier League game this season, but up until the trip to Burnley he hadn't taken on the No.6 role single-handedly. Previously, Lampard was pairing the Frenchman with Jorginho or Mateo Kovacic, or playing him as a box-to-box midfielder, but he now looks set to entrust Kante with the solitary holding position in a three.

The decision certainly paid dividends against Burnley and Sheffield United. Up against two-striker systems, Kante frequently dropped between the centre-backs to form a 3v2 during build-up play. But, rather than playing simple and slow, he kept the tempo high with quick passing and occasionally drove forward to commit a striker towards him and free up Thiago Silva or Kurt Zouma. 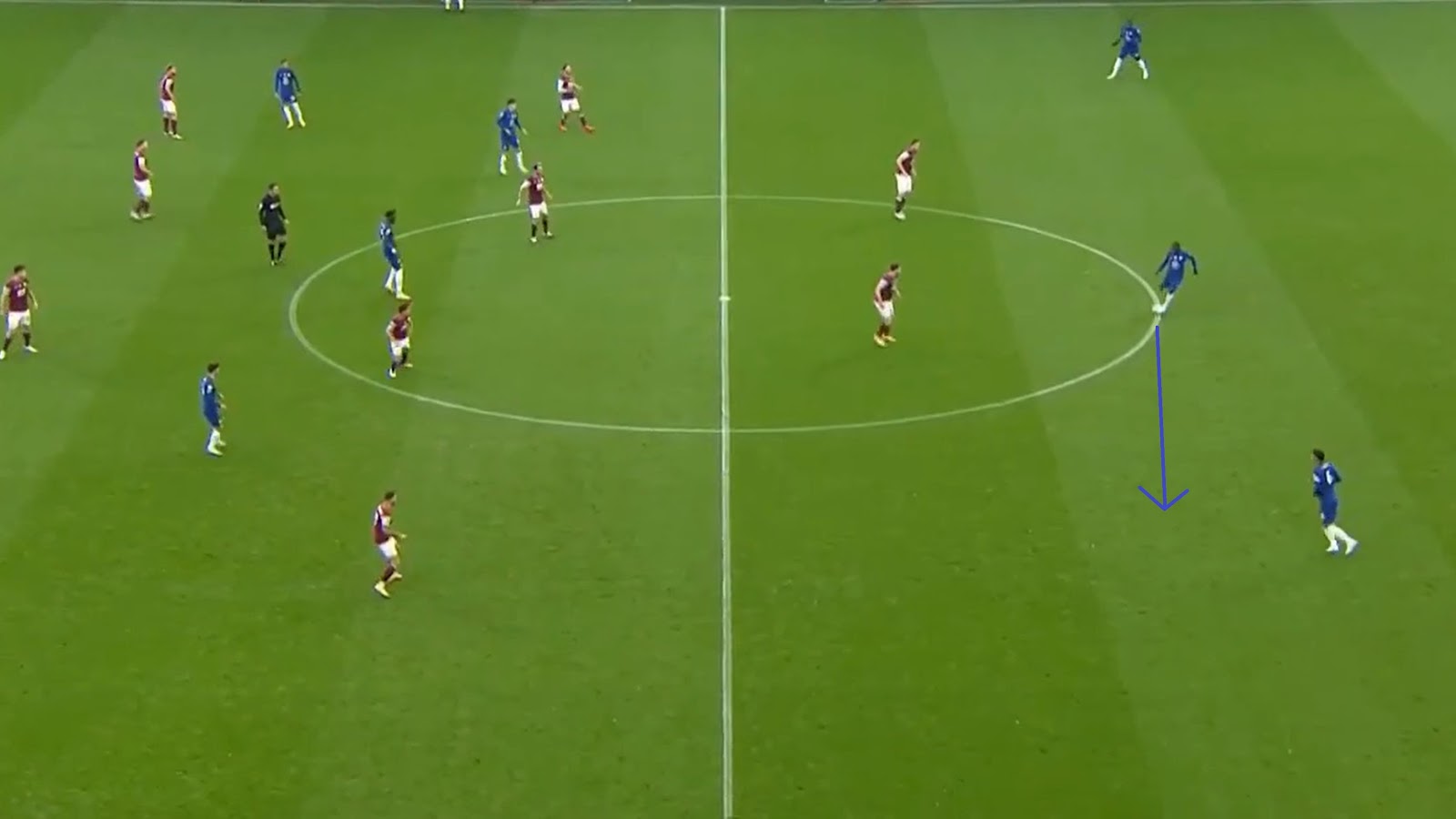 Kante was dynamic, only dropping when he saw the need, and he showed a good range of passing, not to mention reasonable accuracy on his weaker left foot. His combination of tempo, range and two-footedness is something Chelsea lack when they play Jorginho in the No.6 role

The stats demonstrate how well Kante did at the base of a midfield three. In these two games, he averaged 88.5 passes at a completion rate of 92.6%, 8.5 long balls (6.5 of which were accurate), and one key pass. By contrast, Jorginho this season has averaged 48 passes per game at a lower completion rate of 85.7%, averaging just 3.1 long balls and 0.6 key passes.

If there are still football fans who don't believe Kante is anything other than an energetic ball-winner, these matches surely were the last pieces of evidence necessary to prove otherwise. And the good news for Chelsea was that his defensive skill set meant the other midfielders (Mason Mount and Kai Havertz or Kovacic) could be a bit more adventurous.

Against Burnley and Sheffield United we constantly saw Chelsea's No.8s (particularly Mount) breaking the last line with runs from deep. When there were gaps opening in the opponent's defence, they would exploit them and offer for the ball in behind. Their freedom to do this was no doubt partly influenced by Kante's presence in defensive midfield.

THE ZIYECH AND JAMES PARTNERSHIP

Another change made by Lampard for the Burnley and Sheffield United games was the introduction of Hakim Ziyech on the right side of the front three. With one goal and three assists in these two matches, it's fair to assume we'll see more of him in future.

Chelsea haven't had many attacking midfielders like Ziyech, something his manager has referenced. "[Ziyech] gives us a different in terms of the left foot off the right side," Lampard said. "It's something we haven't had much of in recent years. The ability to find the last pass or the cross...to break teams down."

Ziyech operates more as an inside right than a winger. He gravitates towards the channel, from where he can get better angles for long-range shots, through balls, or bending crosses towards the far post on his preferred left foot. His first league goal for Chelsea, against Burnley, came from an inside right position, while he also showed his threat as a passer in the win over Sheffield United.

If Ziyech comes inside, Chelsea need width from their right-back, and they have got this from Reece James. Cesar Azpilicueta is a solid defender and a capable crosser, but James offers more as an outside right. He can dribble, underlap or overlap, pass well with either foot, and shoot from distance. In short, he's a more rounded attacking threat than Azpilicueta. And with him going down the wing and Ziyech coming inside, opponents have a hard time deciding who to prioritise. 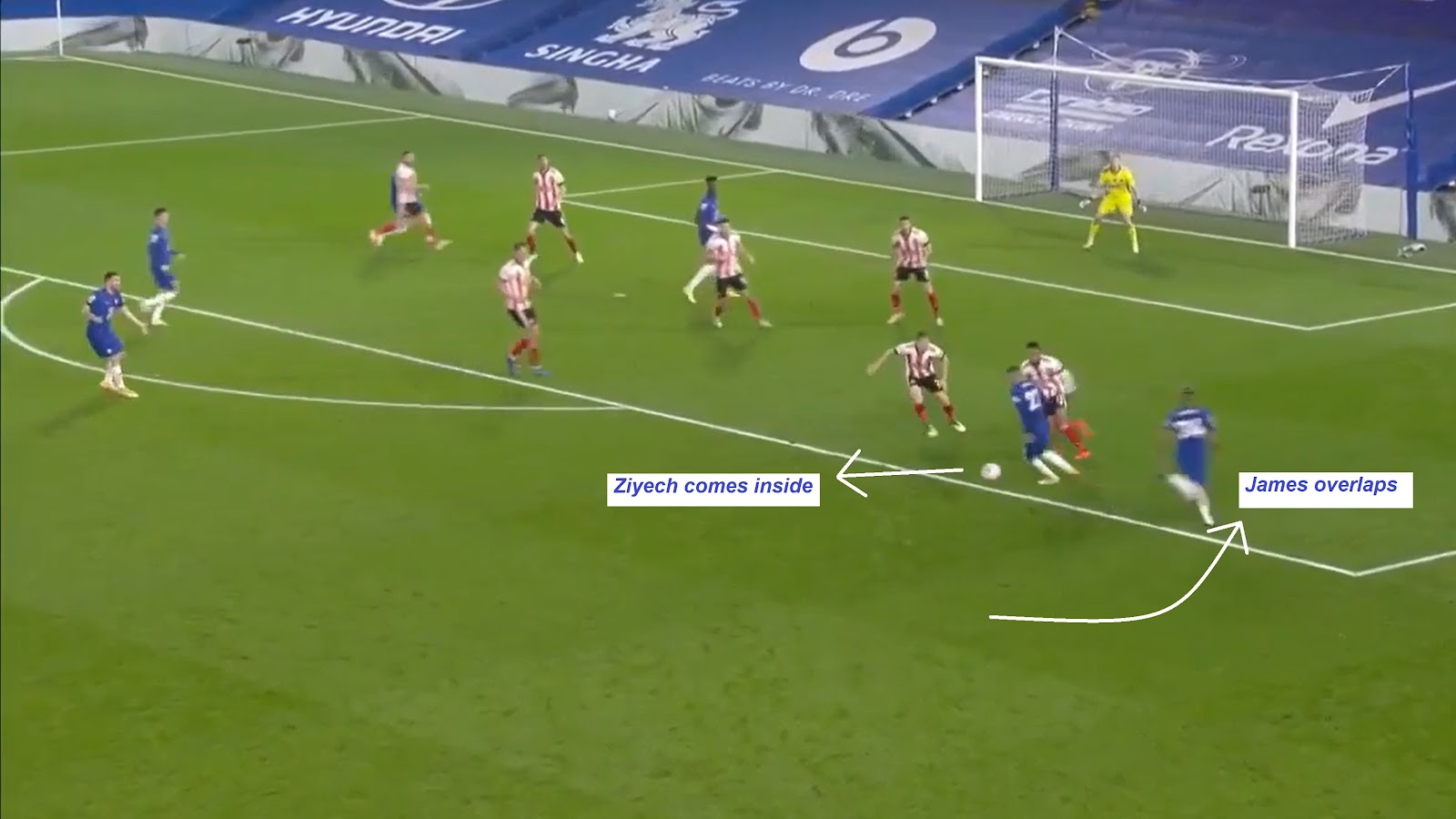 With James getting forward on the right and Ben Chilwell doing the same on the left, Chelsea have full-backs on each side that offer forward runs and good crossing, which in turn means their 'wingers' can come infield. Against open opponents, this could lead to lots of overloads and combinations in central areas. Against narrow opponents, the full-backs can offer for the switch of play and attack space down the sides.

Timo Werner started this season as Chelsea's No.9, but Lampard moved him to the left of the front three against Burnley and Sheffield United. This made space for Tammy Abraham to take the striker position. On a fundamental level, this ensured two natural goalscorers in the line-up. But the change also led to a slight adjustment in the team's attacking dynamic.

Thanks to Chilwell's presence on the left flank, Werner doesn't need to stay wide. He can drop into midfield like Ziyech does (albeit without the same passing, crossing or long-range shot threat), or make runs in behind the last line. These runs, performed from a slightly wider starting position, are difficult for the opponent to track because they often come on the blind side of centre-backs. It gives the opposition right-back a problem – stay and deny space to Chilwell, or follow Werner's run?

Werner is harder to pick up in this position, while Abraham brings something different to the frontline. He's stronger back to goal, with the physicality to hold off defenders and play lay-offs to midfielders. He consistently came short against Burnley and Sheffield United, offering a passing option to the centre-backs. 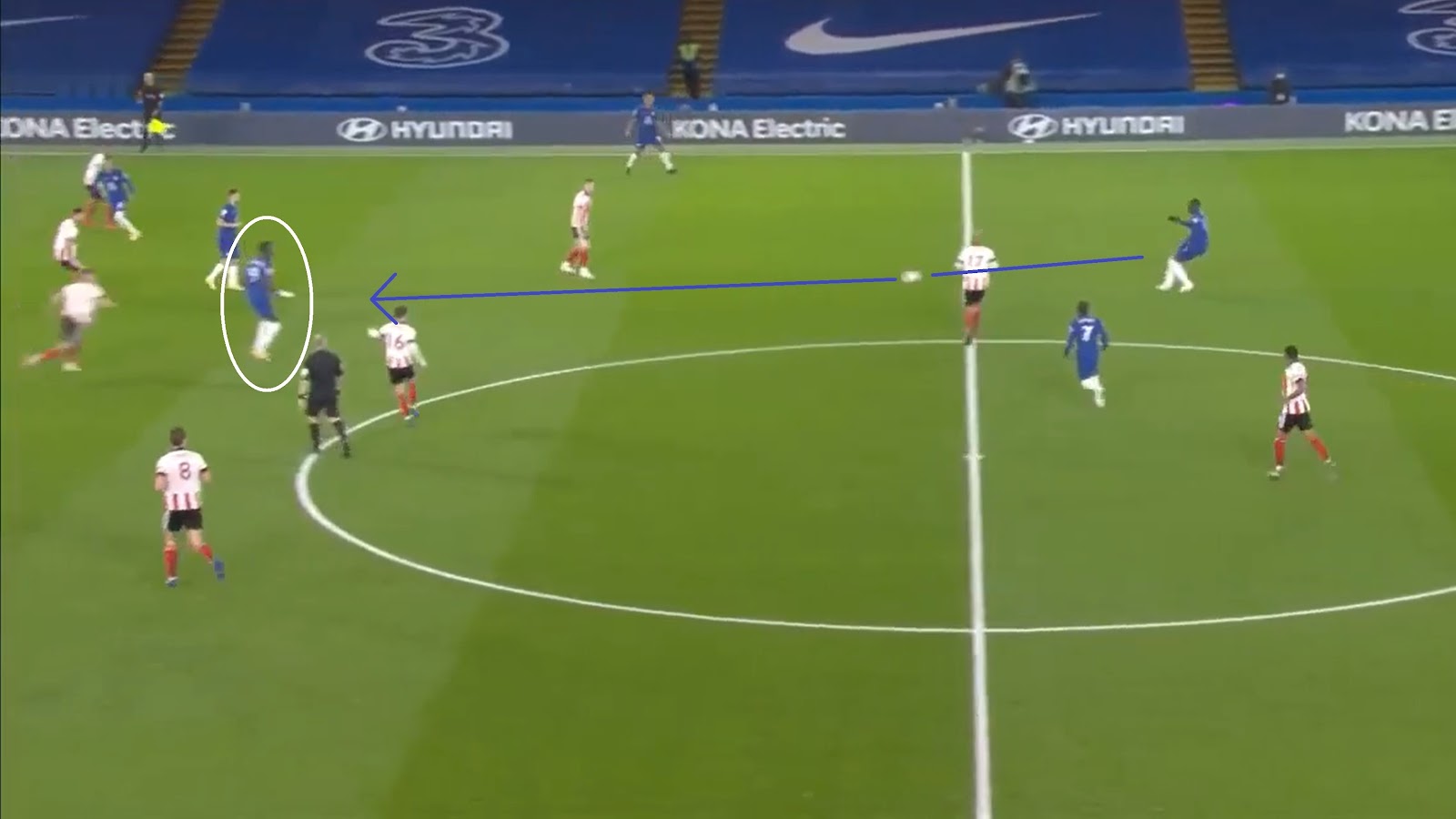 Against a low defensive block, Abraham also offers Chelsea a more direct route. He's good in the air, so can be hit with long balls as a means of getting up the pitch or with crosses into the box. With both full-backs putting balls into the penalty area, it makes sense to have someone of his stature and finishing prowess trying to finish them. He may not have Olivier Giroud's wrestling qualities, but he nonetheless remains a threat in these situations.

With Kante improving build-up, both full-backs providing quality final balls, Ziyech and Werner coming inside and threatening in different ways, and Abraham giving more variety to their attacking options, Chelsea were able to beat two of the Premier League's more defensive teams with relative ease. After an inconsistent spell, Lampard may have found his ideal line-up.