Why Real Madrid celebrate their titles at Cibeles

Real Madrid sharing titles with the fans at the fountain is a club tradition, one that truly cemented itself in the mid-1980s.

When Cibeles Fountain was constructed in the centre of Madrid in 1782, nobody knew that a couple of centuries later it would become the meeting point for Real Madrid fans after every trophy win. When Real Madrid secure a major title, fans gather at the fountain to see players wrap a club scarf or flag around the neck of the goddess Cibeles – 'Cybele,' in English.

Due to the unique circumstances of the coronavirus crisis, such a gathering wasn't possible when Real Madrid secured their 34th LaLiga Santander title in 2019/20. The club announced that the players wouldn't be visiting and local authorities urged fans to stay away both the fountain and the square – la Plaza de Cibeles – which surrounds it in the event of victory.

But all Los Blancos' other titles since the mid-1980s have been toasted with a party in front of the Greek goddess. Before then, small groups of both Atlético de Madrid and Real Madrid fans had visited the Plaza de Cibeles on occasion to celebrate major successes, in all likeliness due simply to its central location. In fact, hard as it is to believe today, it's widely believed that the first instance of such a celebration came after Atleti won the 1961/62 European Cup Winners' Cup final against Fiorentina, before fans of both capital city clubs and of the Spanish national team gathered at the fountain for other important victories over the following years.

However, it was during the 1980s, and the era of dominance for Real Madrid's so-called Quinta del Buitre team, that celebrating at Cibeles cemented itself as a distinctly Real Madrid tradition. They certainly celebrated there a lot, winning five LaLiga Santander titles in a row between 1985 and 1990.

Atleti's trophy drought in the 1980s and Real Madrid's trophy 'addiction' made the goddess a Madridista for life. By the time Atleti started winning again with a pair of Copa del Rey triumphs in 1991 and 1992, their fans had decided to move their celebrations 500 metres down the Paseo del Prado to Neptuno, 'Neptune's Fountain.' They left Cibeles exclusively to Los Blancos.

When Real Madrid do celebrate there, it's the captains who have the honour of dressing Cibeles up in club colours after a big win. Before Marcelo, the last captain who could experience that, Sergio Ramos, had done this several times, having won a horde of trophies from taking on the captain's armband in 2015 until leaving the club in 2021.

"It's a true platonic love," Ramos said of his relationship with the statue of the goddess in an episode of Movistar's Informe Robinson series. "Spending a moment with Cibeles is like when you see your mother again after going two or three months without seeing her. Whenever I drive by the fountain, I sit gazing at the statue for as long as the traffic lights stay red."

And this week it was Marcelo's turn, dedicating the club's 35th LaLiga Santander title to the goddess. 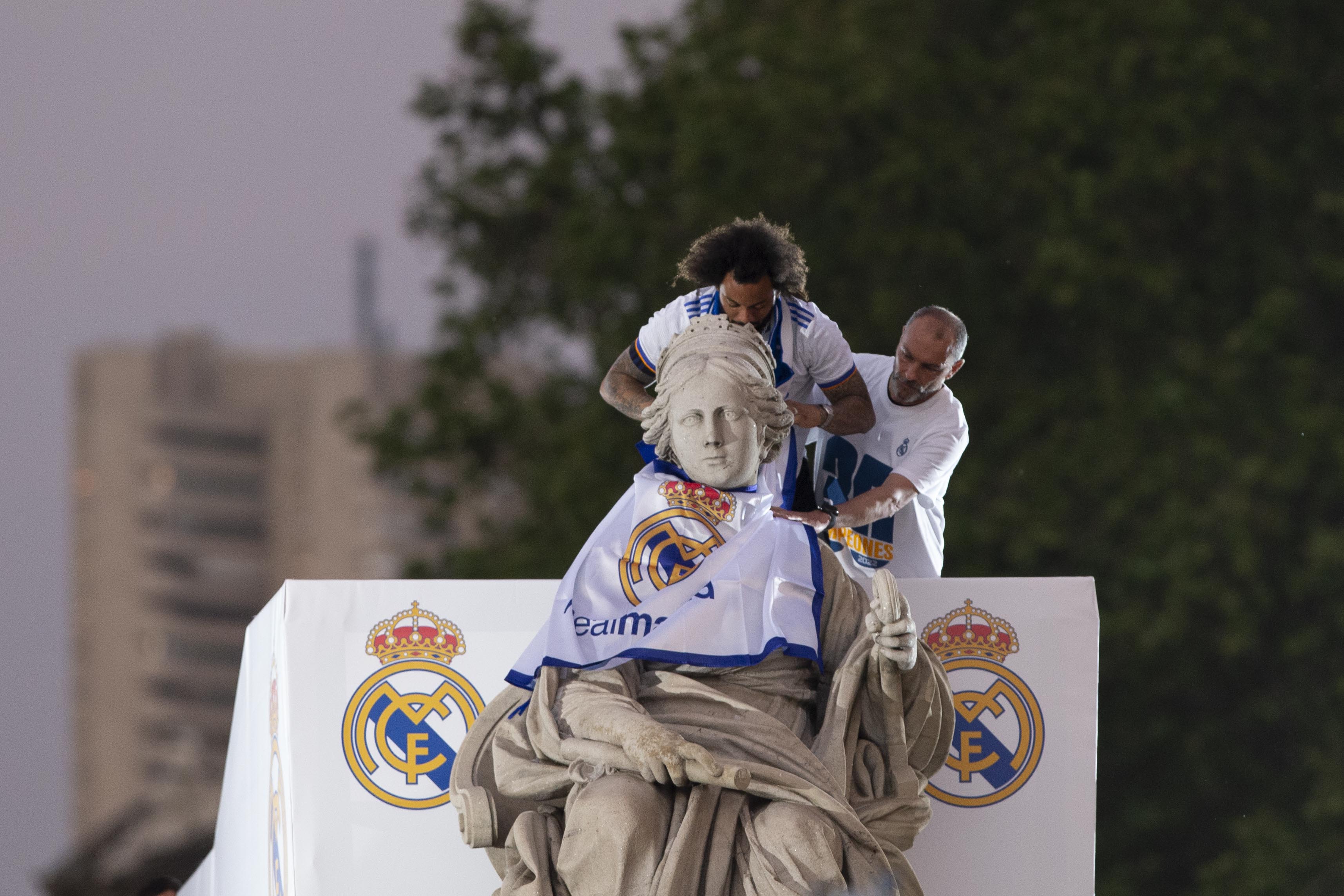