Why Levy & co sitting on Tottenham goldmine: If only Bale would snap out of it!

COMMENT: So that's it. It's over. Gareth Bale will leave Tottenham at season's end and return to Real Madrid. No late career revival. No Zizou revenge. He'll go back to Valdebebas with his tail between his legs...

Well, that's what appears to be waiting for the Welshman today. But nothing's set in stone - especially not in this game. Bale can turn things around. He can earn a deal from Daniel Levy, the Spurs chairman. And he can rescue a declining reputation.

For the moment, it's off. The chance of Real Madrid selling to Spurs currently a pipedream. With still 18 months on that contract, Real president Florentino Perez wants to clear Bale's wages off the books. And he was banking on Jose Mourinho doing what Zinedine Zidane couldn't and getting a tune out of the Welshman. But things haven't gone to plan.

Eduardo Inda's Okdiario let it all hang out earlier this week. Florentino's worst fears have been realised. Levy making it clear to his counterpart that Bale would be going back. If Marca is Florentino's official mouthpiece, Inda and Okdiario are the ones who help Madridistas read between the lines. This call was made. And for the moment, Bale will be seeing out the final year of his contract in Madrid.

Mourinho is being blamed in some quarters in England, but of course they're wide of the mark. The Spurs manager only experiencing what Zidane has struggled to manage over the two years since he returned to the club. Before his return to London, Bale and his supporters (including this column) could accuse Zidane of failing to bring out the best in the attacker. We could blame the toxic, clique-ridden locker room for Bale's isolation. But not anymore. Not after these past six months at Spurs.

On the training pitch. Inside the dressing room. Bale has been a positive influence about the place. There's been no complaints about the Welshman's approach or willingness to muck in. 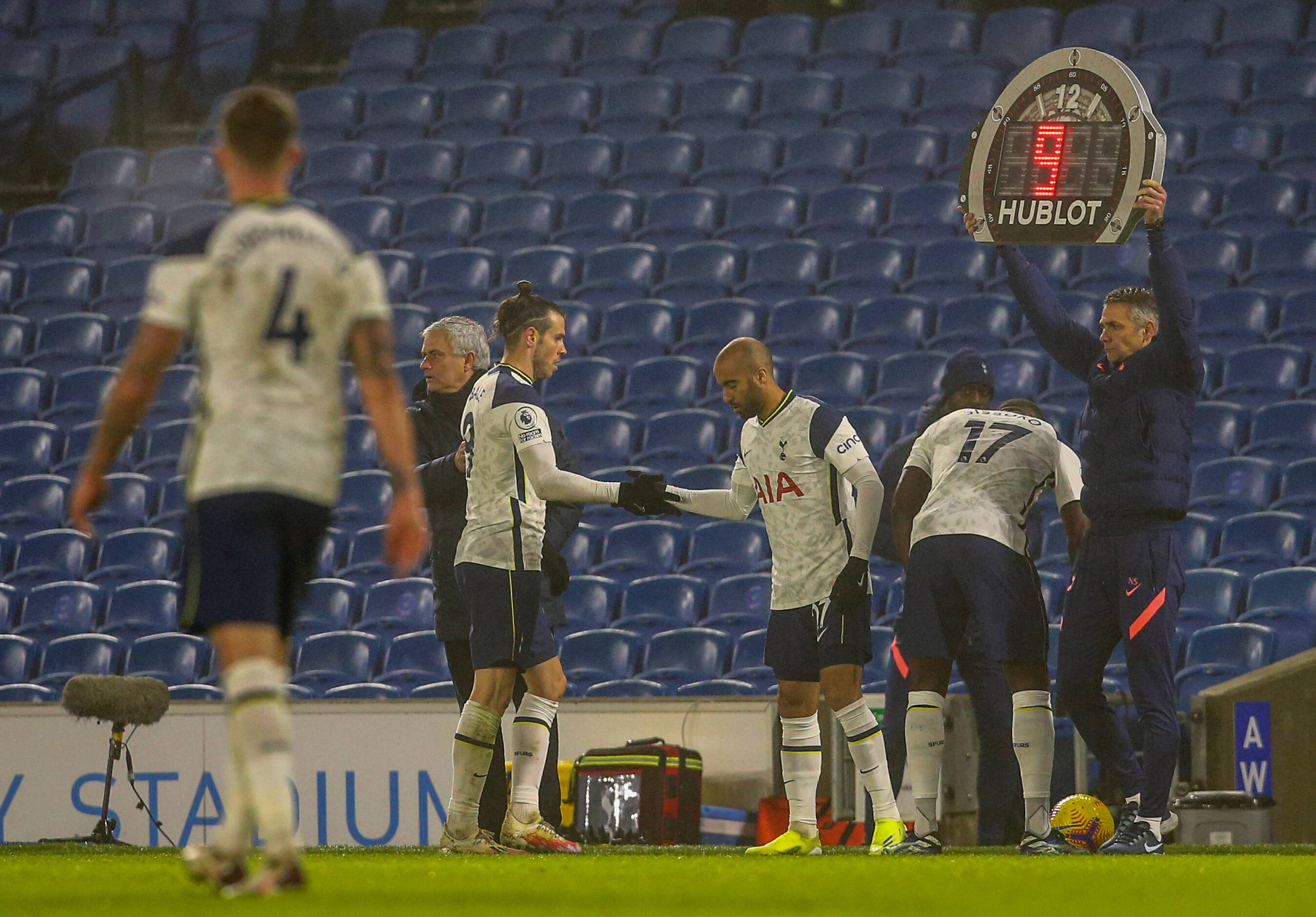 Bale hooked by Mourinho in defeat at Brighton

But on matchday, from the opportunities granted by his manager, Bale has fallen short. Glenn Hoddle, a UEFA Cup winner with Spurs, highlighted it early doors. Bale just wasn't "at it", declared Hoddle in the first weeks of Bale's loan; there "was a fragility" about the Welshman in the heat of battle. And it's what Mourinho is now admitting to long-time confidants in Portugal.

They're waiting for Bale to explode. The manager. The chairman. Even his teammates. They're baffled. Spurs have given him the platform. Mourinho has given him the time. His teammates their support. But something has held the 31 year-old back.

Mourinho's hot mic moment last month has been used by the usual suspects to hammer the manager. “You want to stay here? Or go to Madrid and play no football?" Mourinho relaying what he'd said to Bale to his No2 Joao Sacramento. How this can be construed as Mourinho monstering his No9 is anyone's guess, but his critics have magicked up a way.

Pull the message apart and you can sense Mourinho's exasperation. As we've mentioned, at Spurs Lodge Bale has everything he doesn't have at Valdebebas. A manager who wants him to succeed. A squad of teammates who all look up to and seek leadership from him. And a team that is on the ascendancy. Alive in all four competitions. Still a good bet for Champions League qualification. As Mourinho says, is Bale really unwilling to do all he can to stay where he is?

In contrast, by returning to Madrid he would find a team at the bottom of a needed rebuild. Humiliated in the Copa del Rey by lower league opposition. Out of the LaLiga title race. And needing to sell if that rebuild is to take effect. Again, you can understand why Mourinho is so vexed.

And that frustration must be shared by Levy. Make no mistake, the chairman and his backer Joe Lewis are sitting on a goldmine at Spurs. We can talk about the ascendancy of this Tottenham team. But this goes beyond what is happening on the pitch. In terms of marketing; in popularity; Tottenham are fast emerging as a new global force.

Not since Chelsea's emergence in the early years of Roman Abramovich have we at Tribalfootball.com seen such a sudden rise in popularity of a club. There's a thirst for Spurs content - any Spurs content - and it's being driven by personalities and on-field success.

In Mourinho, Levy has managed to place one of the great lightening rods of the game in charge of a dressing room which boasts the England captain in Harry Kane and arguably the greatest Asian player to succeed in Europe in Heung-min Son. Indeed for us, the surge in popularity of Tottenham has come from Malaysia and Singapore. Son's impact surely isn't just being felt here. Those in charge of marketing and strategy at Spurs must be seeing the same figures we are.

Of course, the cherry on the cake would be an energetic, all-action Bale. Rebuilt and revived in a Spurs shirt. The story would be marketer's dream. In terms of drawing power, this combination of Kane, Son, Bale and Mourinho would match up with anything anywhere in the world. It really is a goldmine Levy and co are sitting on.

And a key foundation could be the re-emergence of Bale. It's not over for him at Spurs. Not yet. Opinions can change. Contracts re-negotiated. Football can turn on a dime. Bale just needs to find a way to snap this 'fragility' he's suffering from.

Otherwise, he'll go back to the same hostile coach and the same cynical teammates at Valdebebas - and with his tail between his legs...