COMMENT: Abdoulaye Doucoure. Dominic Calvert-Lewin. Richarlison... that medical room at Everton is getting crowded. They're queuing down the hall. But with injury comes opportunity. And none more so than for one big money signing now finally clear of his fitness woes...

For Jean-Philippe Gbamin this has to be it: Watford at Goodison on Saturday. One appearance this season - a full 90 in the Carabao Cup win at Huddersfield Town - wasn't what we were expecting. The €25m signing from Mainz, a record sale for the Germans, had finally worked his way clear from two seasons of injury. From an Achilles rupture, to a knee injury, it just hasn't happened for Gbamin since his celebrated arrival in 2019. But now injury free and with a full preseason under his belt, it surely was time for Gbamin to prove right the decision of Marcel Brands and his scouts to bring him to Merseyside.

Indeed for this column, Gbamin was the major midfield signing Benitez had been denied by Financial Fair Player over the summer. Where predecessors Carlo Ancelotti and Marco Silva had been prevented from working with a fully fit Gbamin; for Benitez, a brand, spanking new midfield addition had dropped into his arms. At least, this was what it looked like on paper...

Instead, as mentioned, he's had that one appearance in the League Cup. And that's it. Gbamin was again in the squad for defeat to West Ham on Sunday, but when the moment came for Benitez to make a change, the manager turned to local lad Anthony Gordon ahead of the Ivorian.

No shame in that. For many Benitez, after the winger's performance at Manchester United, made an error in not starting Gordon on Sunday. The academy graduate building on a summer where along with Benitez's preseason, he also took it upon himself to do his own offseason training - which included spending time at Tom Owens' celebrated private academy on Merseyside.

But now as Doucoure is forced to the sidelines with a metatarsal injury, a fresh opportunity has opened up for Gbamin. Not quite like-for-like, but with his teammate facing weeks out, it offers Gbamin an extended chance to establish himself in Benitez's plans. Everything, though, will hinge on his form at Finch Farm. 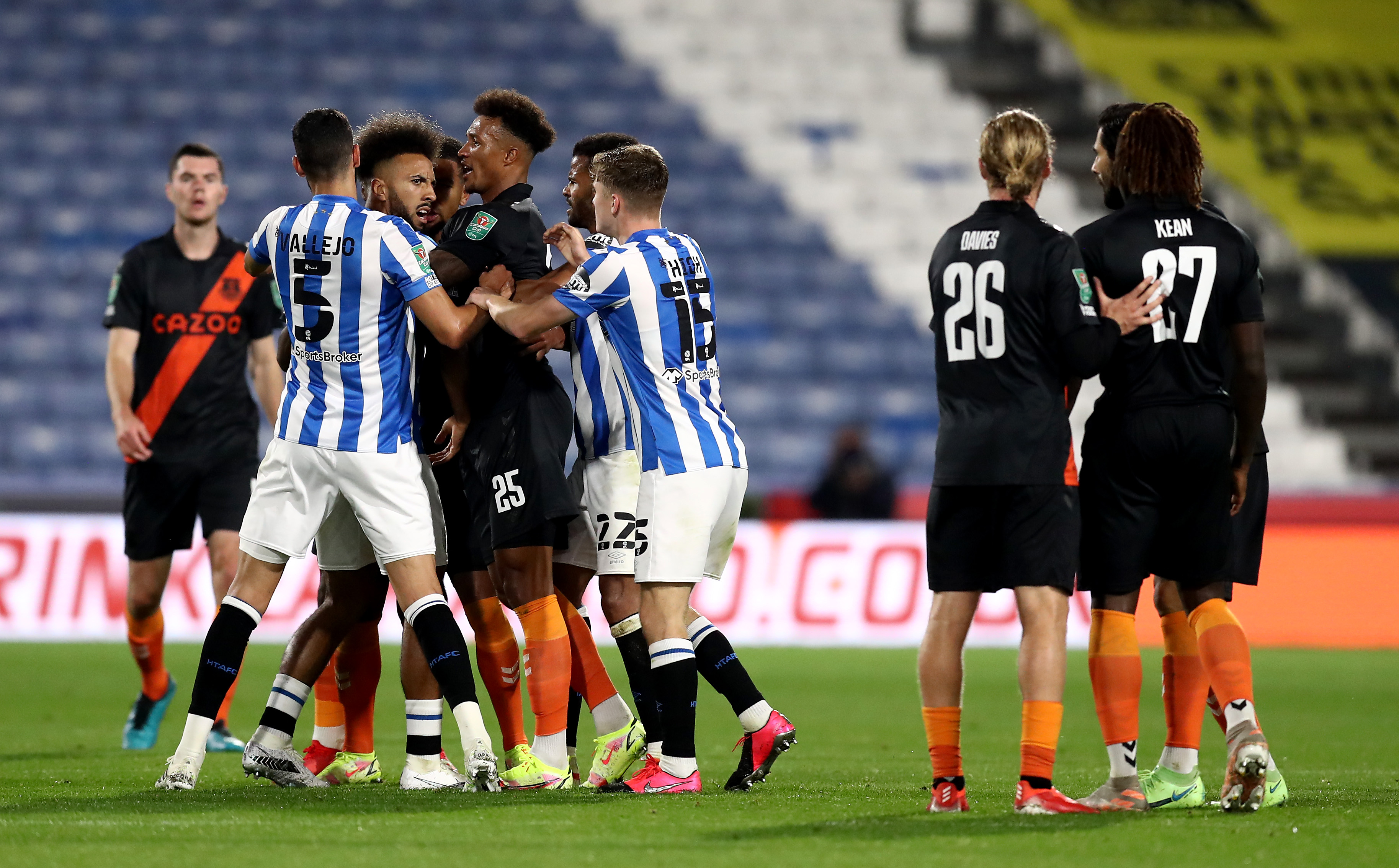 Gbamin in the thick of it at Huddersfield this season

Benitez, when first arriving, was looking forward to working with Gbamin. He knew about the former Lens prospect. He sought him out on the first day of preseason. Benitez liked his physical attributes, he could see a lot in Gbamin that he could work with and improve.

"So if you improve individuals you improve the team, and with experience and motivation and commitment from the players you can improve more."

But it just hasn't fallen for Gbamin. Even with a squad stretched to it's limit - and the player's known versatility - the 26 year-old has found himself overlooked. At Lens, they'd earmarked him as a centre-half - a future replacement for Raphael Varane after his move to Real Madrid. Three years ago, Mainz were convinced they were signing a potentially great fullback. Yet, for all his multi-position experience, Gbamin hasn't been able to force his way into Benitez's XI.

It must be said a driving ban he copped in September perhaps didn't help his situation. Gbamin's lawyer confirming at the court hearing that Everton would also be taking action. Benitez has kept silent on the topic, but you fancy the manager has dished out his own disciplinary action to go with the 14 month ban.

But you also hope Everton have heeded the words of the midfielder's lawyer when pointing out: "He's lived in the UK with very little in terms of friends and support although that's not an excuse for finding himself here" and “He has a child who is 15 months old, a son and his family are in France and Germany".

At Manchester United, we've had article after article, interview after interview, regarding Phil Jones' battle to return to action after his two years of injury. But there's been no such recognition for what Gbamin has fought to overcome in the same time. And unlike Jones, it's been achieved in a foreign country with a foreign language.

But this isn't about drumming up sympathy for Gbamin. It's football. It's circumstances. And just as the pendulum was swinging one way, it's now swinging in his direction. For Benitez. For Gbamin. With Doucoure's injury has come opportunity.

Now clear of his fitness woes, this is the chance for Jean-Philippe Gbamin to show us all what he can do.