What was the point? Why those Aubameyang sale leaks so destructive for Arsenal

COMMENT: Hang on. Hang on. This is bordering on the destructive. Less than a year after making him their highest paid player. After over a year of marathon negotiations. There's now some inside the board room at Arsenal willing to see their captain transfer-listed ...?

So the story goes there's some inside Arsenal prepared to cash in on Pierre-Emerick Aubameyang over the close-season. His form. His age. And those discipline issues. They're now a concern for certain members of Arsenal's top brass. Sources even telling Football Insider that within manager Mikel Arteta's backroom team there's a belief that Aubameyang is past his best.

Where these detractors were last summer is anyone's guess. Why they didn't pipe up before Aubameyang put pen to paper on his three-year, £325,000-a-week contract, only they can set us straight.

But what this does confirm are the concerns of the likes of Tony Adams and Paul Merson. Arsenal's transfer policy is slipshod. There's a disunity within the club over the direction of it's squad building. And that it can leak that the captain could be sold in the lead-up to as massive a fixture as Arsenal have this Saturday against Liverpool is proof that the place remains divided.

This column has been bullish about Arsenal this season. The Premier League campaign has stuttered. There's been questions raised about Arteta and his handling of William Saliba and his young strikers Folarin Balogun and Eddie Nketiah. But overall, you could see the progress. You could recognise a plan. But letting it be known that Aubameyang could now be in play is just ridiculous.

The size of the contract. The angst around trying to get him to pen the contract. Well, that's one thing. But for some inside the club to be now thinking out loud that Aubameyang could be moved on - barely two months after finally finding an end to the Mesut Ozil saga... it beggars belief. 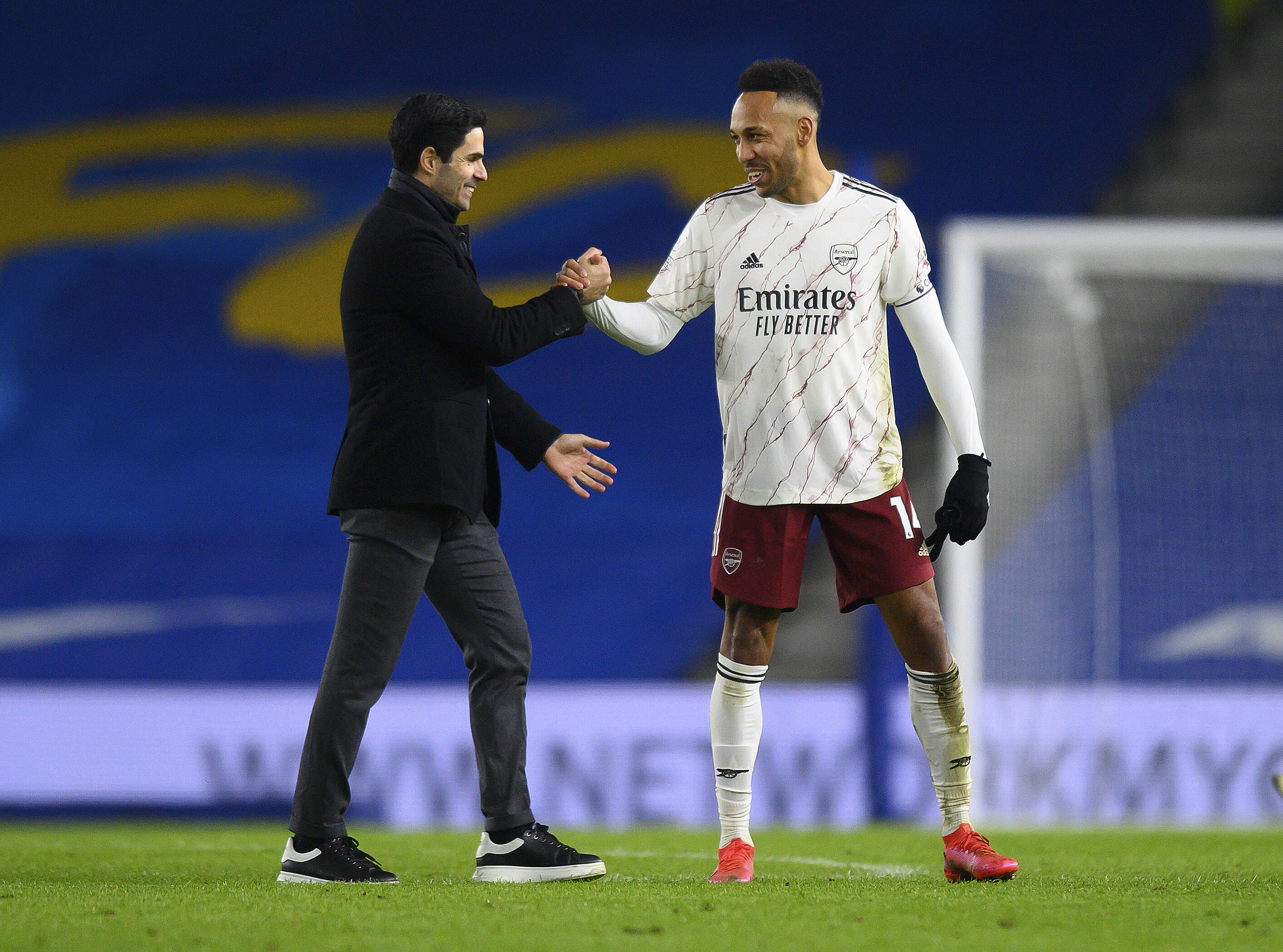 Arteta and Aubameyang still together

Indeed, it's madness. What else can you say? It's that Albert Einstein quote about repetition and different outcomes. It was only in January that this board managed to convince Ozil to take a hit on the final months of his record deal and accept a free transfer to Fenerbahce. After all the frustration, even at times hostility, towards the German and his unwillingness to move on, that Arsenal managed to persuade Ozil to depart finally gave the front office time to breathe.

Yet now the board... at least some members of the board... spy an opportunity to jump on the merry-go-round again. Another over-30s player. Another sitting on a goldmine. And some inside the club want to drag the fans through all that again.

For now, however, it appears a non-starter. Arteta has no wish to lose his top scorer. Yes, there's been tension between the pair, but Arteta knows what he has in Aubameyang. He's confident of still getting a tune out of the 31 year-old. And for all the criticism of Aubameyang's performances this season, the skipper still remains Arsenal's top scorer.

The wages, of course, are also an issue. But it's really Arteta who holds the greatest influence here. He championed Aubameyang's new deal. He's stuck by the veteran as he's battled for form. And even after his axing for the win against Tottenham, Arteta never hung Aubameyang out to dry. Again, it was those leaks from inside the club that let us all know about the captain's poor timekeeping - and his wobbler after being informed of his benching on the day.

We live on leaks here. We can't complain about that. But for a club of Arsenal's ambitions. For a manager as serious a football man as Arteta. This stuff must be unacceptable. And it clearly isn't just the dressing room. This willingness to let things slip out - always to the detriment of the club and individuals - runs right through the place.

Again, the idea that Aubameyang is unwanted by some, after investing near record money in him for the next three years... it's the work and planning of unserious people. And it undermines everything that Arteta is trying to put in place.

What's the point of it? Days away from the resumption of the season. A real six pointer against Liverpool. How else can you define the motivation behind such a leak other than to undermine? If the club - at least some inside the club - is letting it be known they're willing to sell, then that's only going to drive down Aubameyang's price. That Arsenal's star man could be shifted on is only going to give transfer targets extra pause for the thought. And that such conversations are being held amongst coaches is only going to drive a wedge between a suspicious Aubameyang and Arteta's staff.

This isn't just undermining, it's destructive. And Arsenal need to get a lid on it. These leaks are the actions of people not with the manager's - nor the club's - best interests in mind.