Super League clubs at war with EACHOTHER over break-up

Werner & Tuchel: Why they're both planning for long-term Chelsea future

COMMENT: There was no need to second guess Thomas Tuchel last week. The frustration, the exasperation, hits you smack in the face. Chelsea's manager clearly fed-up with the local press' rumour mill running away with itself...

Tuchel's reaction was natural. There was nothing rehearsed here. Timo Werner? Leaving? After just the one season in England? What on earth are you talking about? It's a wild rumour. A floater if ever there was one.

The story goes Werner and Chelsea's top brass have already had enough of eachother. He'll be shifted on this offseason. In a depressed market no less. That £48m paid last summer effectively written off. All that ground work last year. All the effort to burn off competition from Liverpool, Manchester United and Bayern Munich. Everything Chelsea did to convince Werner to choose them... After all, with a buyout clause in play, it all came down to which club could be the most persuasive. That Chelsea managed to win this race was credit to their management team. Yet now, apparently, they're happy to write Werner off...?

Yeah, you get the picture... as did the journalist who pushed Tuchel about the speculation last week.

"Stop reading, stop reading, what do you read?" an exasperated Tuchel responded, urging the reporter to stop following the crazy stuff that makes its way from social media into the football press. "Read a book.

"There is no book about Timo Werner. So read a book."

Werner isn't leaving Chelsea this summer. Not if he has anything to do with it. Or, even more importantly, his manager. Tuchel knows what he has on his hands. He knows his strengths. He knows where and how he plays his best football. These past weeks since Tuchel's arrival have been about building up Werner's self-belief more than anything else. And the Germany striker is responding. 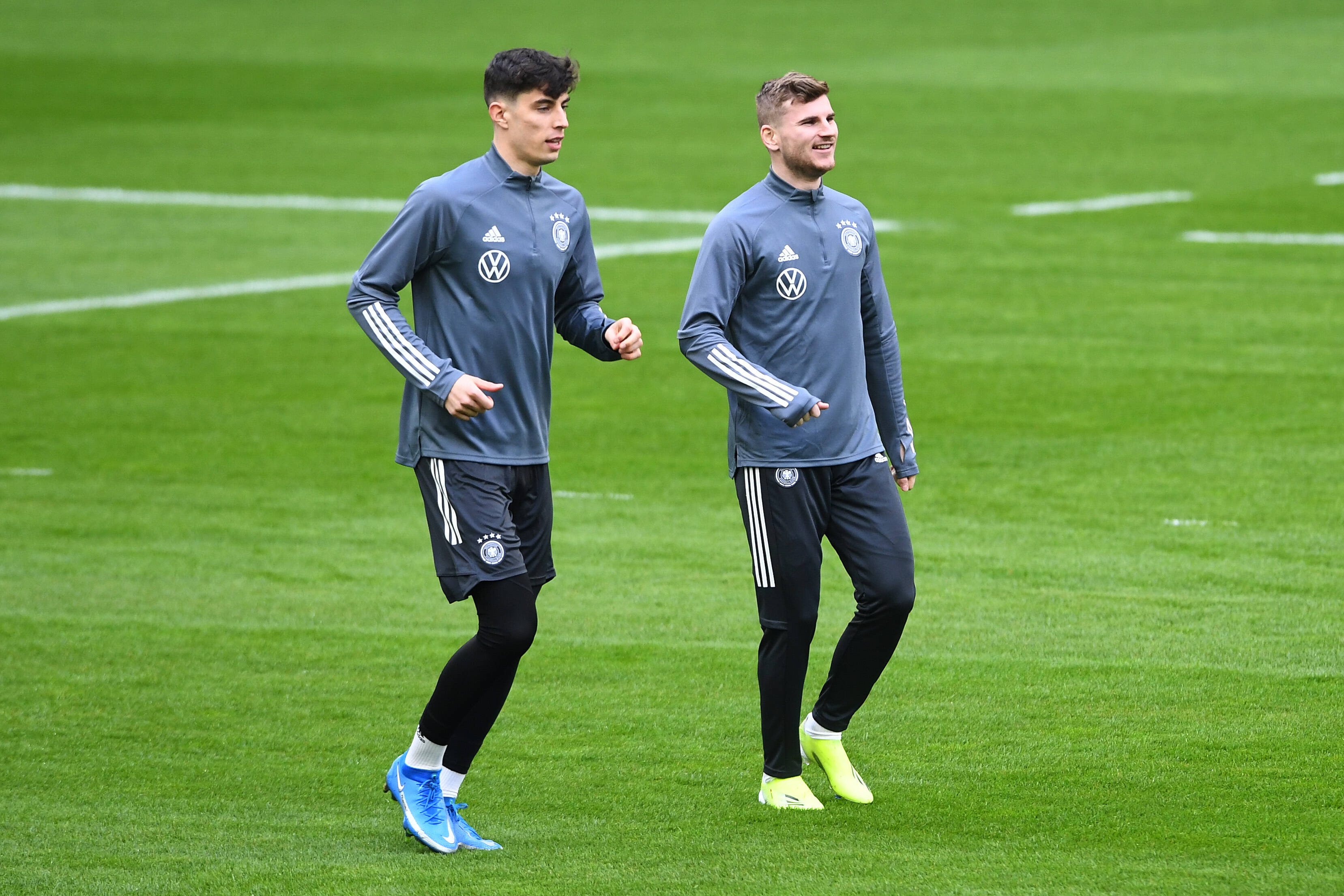 Kai Havertz and Timo Werner in Germany training this week

Indeed, back home, talk of Werner and Chelsea splitting up has been met with ridicule. And it's significant the claims around Werner being offered to Borussia Dortmund as a makeweight for Erling Haaland never originated from Germany.

Ten goals and ten assists so far this season isn't the stuff of a flop. Yes, it can be better. But 20 goal actions in 39 games isn't bad reading. Indeed, Werner is no Robinson Crusoe when it comes to Chelsea this season. Even N'Golo Kante has had his doubters this term. Though with Tuchel in charge, they've since disappeared. And in Germany, they see the same happening for Werner.

An assist for the win against Tottenham. Two for victory against Sheffield United and a goal in another win against Newcastle. All achieved around talk of Chelsea being prepared to listen to offers for Werner come June. As Tuchel suggested so clearly last week, it doesn't make sense.

And just to cement things, we had Hansi Flick, of European and world champions Bayern Munich, declaring Werner among his most "favourite players" and if he had his way, the former RB Leipzig striker would still be running around the Bundesliga in a Bayern shirt this season and not in England in Chelsea Blue.

It's significant Tuchel's latest media conferences have been peppered by his wish for Chelsea's counter-attacking to improve. Publicly, he's urged the likes of Hakim Ziyech, Kante and Kai Havertz to all move the ball quicker when in possession, particularly if the opposition are over-committed. It's a of play tailor-made for Werner - which his former coach at Leipzig, Ralf Rangnick, has been eager to point out.

"Timo is someone who needs trust. He only gets that if the respective coach knows him and relies on him," says Rangnick, who turned down the Chelsea job before Tuchel's appointment.

"The league is less important. But the club. From a purely hypothetical point of view, I would better see him in good hands with a club that is not necessarily defined by ball possession football.

"The best place to see him is where a team switches quickly or quickly counterpresses after losing a ball."

Southampton manager Ralph Hasenhuttl, who also worked with Werner at RBL, says similar: "The good thing for him, I think at Leipzig when I was there, is we concentrated completely on his qualities. Our quick transitions after winning the ball, it was perfect for our game."

As Chelsea's players continue to adjust to Tuchel's demands, you can see a power-based counterattacking system developing under the German. We've mentioned it before, but former Chelsea manager Glenn Hoddle says the key to the team's improvement under Tuchel has been his "runners" in midfield. Whether centrally or at wing-back, it's about developing those quick breaks - a facet of Tuchel's system that can exploit the strengths of Werner - just as Hasenhuttl and Rangnick have stated.

A new country. A new league. A new language. And the time needed to adjust dragged out because of everything that's happened in London this past year. As Thiago Alcantara, Liverpool's summer signing from Bayern Munich, explained so well this week: "It is something psychological. As in the day to day being able to do little in the city with the family, and more in a new city. You go from home to training and from training to home and you enter a dynamic in which it is just that."

It may take longer than expected, but in Werner, Chelsea will find themselves with a player on their hands. A striker as good as any in Europe. Tuchel knows this. It's why he was so frustrated, even exasperated, last week.