Vlahovic & Arsenal: Why landing super Serb would be watershed moment for Arteta

COMMENT: For the symbolism. For reinforcement. This is the one he wants. Nothing will say that Arsenal are back - and thanks to Mikel Arteta - than the arrival of Dusan Vlahovic this month...

Of course, if things had fallen their way, Vlahovic would already be with the Gunners and leading their line. Over five years ago, Arsenal made a serious attempt to ferry a 16 year-old, 6ft 3in, Vlahovic away from Partizan Belgrade. A 16 year-old who was already a first teamer with Partizan. But then Pantaleo Corvino jumped in...

Corvino, an expert on the East European transfer market, was then sporting director of Fiorentina, "I went out there on my own and convinced all parties to accept our offer of €1.5m - even though we couldn't bring him back straight away.

"As a minor and outside the EU, he couldn't be registered at the time. So we gave him a big salary to secure him. Many inside Fiorentina at the time were skeptical that I'd spent money on an unknown player and taken the only vacancy we had for reinforcements with a passport from outside the EU."

Five years on and Corvino, again, has been proven a market genius. The wily dealmaker has long left the Viola, but his determination will see Fiorentina sell for a club record. €60m? €70m? €80m? The figures being bandied about a far cry from the €1.5m Corvino managed to convince Fiorentina's board to part with less than five years ago.

And in London, they're willing to pay. Arsenal, after hesitating when Vlahovic was still a Partizan player, now showing no such uncertainty. Talk of wages and fee totalling £300m of no real concern. The money is there, it's now about convincing Vlahovic on what Arteta and his staff are putting together.

And it's a hard sell. For as much as we've seen Arsenal propel themselves into top four contention this season. As exciting as it is to see the club's academy graduates respond as they are to Arteta's management. For the other options Vlahovic has on the table, Arsenal and Arteta are no sure thing.

Juventus are involved. As are Inter Milan. Champions League certainties. Title contenders. Everything Arsenal haven't been these past few years. Vlahovic knows what he'd be getting if he was to remain in Serie A. 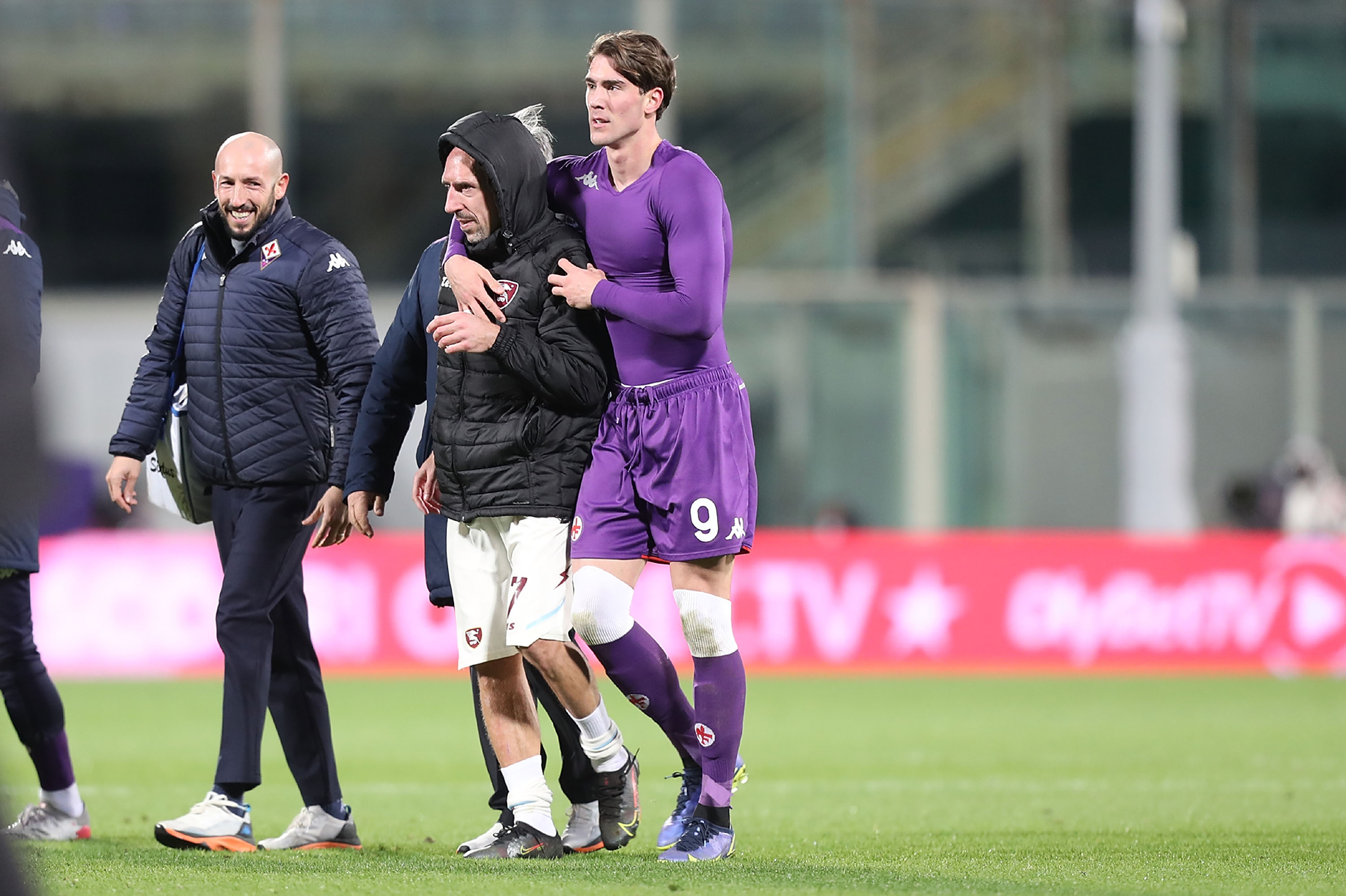 Vlahovic catches up with Ribery after facing Salernitana this season

Which is why Arsenal's push is so significant. Convince Vlahovic to buy into the Arteta project. Convince him to roll the dice and choose the London option. And it's a deal for Arteta to plant his flag on. One to show Arsenal.. this Arsenal... are more than just the badge. There's more about them than living off past glories. It's a team with a future - and for the here and now. Vlahovic's arrival would affirm that.

For Christian Vieri, Vlahovic was as good as any centre-forward in the game last year. The former Italy international declaring: "To whom do I give the title of the best player of the first part of the season? I say Vlahović, without a doubt. He is, along with (Erling) Haaland, the best purist in Europe."

Though 21, Arsenal would be signing a centre-forward to transform their game. Vlahovic in December matching Cristiano Ronaldo's Serie A record for the most goals in a calendar year. Francesco Baiano sees a lot of former Viola teammate Gabriel Batistuta in the Serb: "Like Bati he has incredible commitment. Vlahovic's improvements over the last year have been impressive. Like Bati, he feels the goal without even looking at it.

“They could shoot with a blindfold on and still be able to score."

At a struggling Fiorentina. Without the ties to England Haaland enjoys. Vlahovic doesn't enjoy the same press as his peers. His numbers say otherwise, but he is rarely mentioned in the same bracket as Borussia Dortmund's centre-forward, nor Haaland's great rival Kylian Mbappe, of PSG. But listen to those who matter and you can see why Arsenal are so determined to win this one.

Carlos Freitas certainly believes Vlahovic would enjoy a greater profile if he'd taken a different career route. Freitas was working with Corvino as they identified and signed Vlahovic. The former Viola director in no doubt about the Serb's future.

"I see him in a great European team," he declared. "If Dusan had gone to the Netherlands or Austria, maybe to Salzburg as Haaland, he would have scored 30 goals and had the same path as Erling. He is a 21-year-old with a personality I have never seen, he is destined to do great things."

Indeed, it's that "personality" which you fancy is also attractive to Arteta. Vlahovic is a football-obsessive. A career-obsessive. The striker famously shadowing Franck Ribery during the Frenchman's time with Fiorentina. From training to diet, Vlahovic pumped the veteran for everything piece of career advice he could before Ribery's departure for Salernitana.

"I don't like to talk about opposition players," says Bologna coach Sinisa Mihajlovic, "but since Vlahovic is a Serb, I will. I like him a lot, he has a lot of qualities, it is no wonder that he comes from Serbia, certain things are obtained there by birth. He is hungry, angry, never satisfied..."

Hellas Verona coach Igor Tudor has a similar take: "Vlahovic is one of the best in the world. He has everything between those two ears. Hunger primarily. That's what makes the difference."

"Hungry". "Angry". An Arteta player if ever there was one. Even the lack of PR chimes with Arteta's approach. Is it any wonder Arsenal are so aggressive in these negotiations?

For the symbolism. As a watershed. Nothing will say that Mikel Arteta's Arsenal are back than the arrival of Dusan Vlahovic.