Notti magiche. They were truly magical nights for all Italians...

The party began with the Azzurri's group hug to Gigio Donnarumma, who had not realised that he had saved the last penalty too, the decisive penalty, and has yet to end, three days after the final whistle of a match that will remain forever in the history of all Italian fans, but also English ones and all football fans in general. Italian fans have dreamed of this victory, they have dreamed of being able to celebrate this trophy and to be able to live magical nights like those of the 90s.

We told you about it, we started this journey by citing this dream of the Italian fans and the two days of celebration, with the team welcomed in Rome by many fans, with the team (with Matteo Berrettini, Wimbledon runner-up) invited at the Quirinale by the President of the Republic Sergio Mattarella. It seems like a dream: many Italian fans say they have not yet managed to realise that they have won this tournament. A bit like Donnarumma, the true hero of Roberto Mancini's national team. A wall both during the 90 minutes and with the penalty shootouts. It is no coincidence that he won the best player of the tournament award.

The video of the hug between Mancini and Gianluca Vialli went around the world, the former teammates and lifelong friends were crying, moved and happy for the great result they managed to achieve. It is a beautiful story, it really feels like a fairy tale. A fairy tale, so many Italian fans have lived it like this, some have been saying for weeks "we are going to win, it is written". The truth is that this extraordinary result was made possible thanks to the incredible work of Mancini, Vialli, Salsano, Oriali, Evani, Lombardo, Nuciari and Daniele De Rossi, hero of the 2006 World Cup and now also victorious as assistant coach. Mancini's Italy has achieved 34 consecutive useful results, it is a new record and it is clear that this victory is the result of a work started years ago. No team has played as well as Italy, no coach has been able to improve all the players present in the squad, including the reserve midfielders, often decisive for the result: Matteo Pessina, Manuel Locatelli, Bryan Cristante, who has been sent on the pitch by Mancini without fear in the Wembley final.

Gareth Southgate had much more talent in squad and this is beyond doubt. Jadon Sancho and Marcus Rashford entered the field only to shoot in the penalty shootouts, Jack Grealish entered during the match, Saka, Kane, Sterling, Mount... no point in making the whole list, but certainly the strongest team was the English one and for this reason it is natural that English fans expected victory, or at least they were convinced to be the favourites. We have all seen the videos of the English fans before the match and that optimism was justified by the quality of the players available to Southgate. 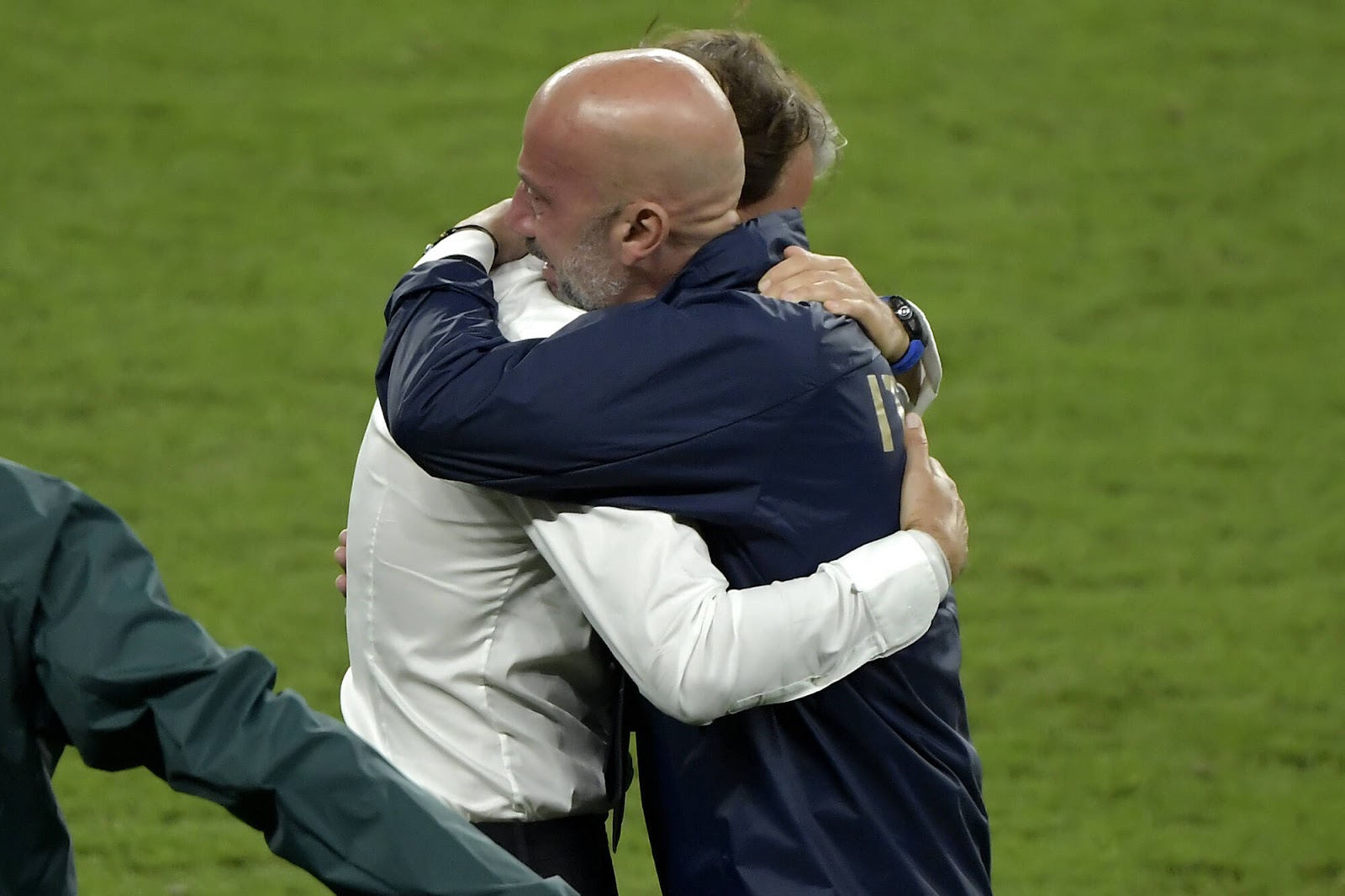 The English coach, however, was not able to get best out of his boys, he almost always played defensively, leaving the initiative to Mancini's boys, despite the early goal scored by Luke Shaw just two minutes after the start of the match. After Shaw's goal, Italian fans really feared that everything was over: the stadium full of English fans, an early goal, the "it's coming home" chorus sung continually by the whole nation, yet Giorgio Chiellini and his teammates have never stopped believing.

The equaliser was scored by Leonardo Bonucci, one of the pillars of the Italian team, for his defensive qualities but also because he is an undisputed leader. The starting forwards came out, Mancini finished the match with Berardi, Belotti and Bernardeschi, but until the end of the match they pushed for the winning goal.

It is impossible to not consider the absence of Leonardo Spinazzola, present at the stadium to support his teammates and on the pitch with two crutches at the final whistle to celebrate. Mancini was not only good at organising the team, making the defence impenetrable and improving the level of every single player, but he was especially good at creating a group, a family. Azzurri are united, they fought together for every ball, they fought together from the first to the last minute of every match and that kind of unity makes the difference.

Total trust, continuous support, sincere affection (as demonstrated by the victory dedicated to Spinazzola), a group that enjoyed playing together and fought for the same dream. We can assure you: all Italians are in love with this team, with this group, with these guys. Everyone has followed the adventure of these guys, everyone, even people who generally do not follow football. The impression is that this national team, this group created by Roberto Mancini, will remain in the hearts of all Italians, not only in the history of football. Surely winning at Wembley made the match even more epic. The hope of the Italians is that this victory, as important as it is for the fans, for the team and for Serie A and Italian football, is only the beginning. 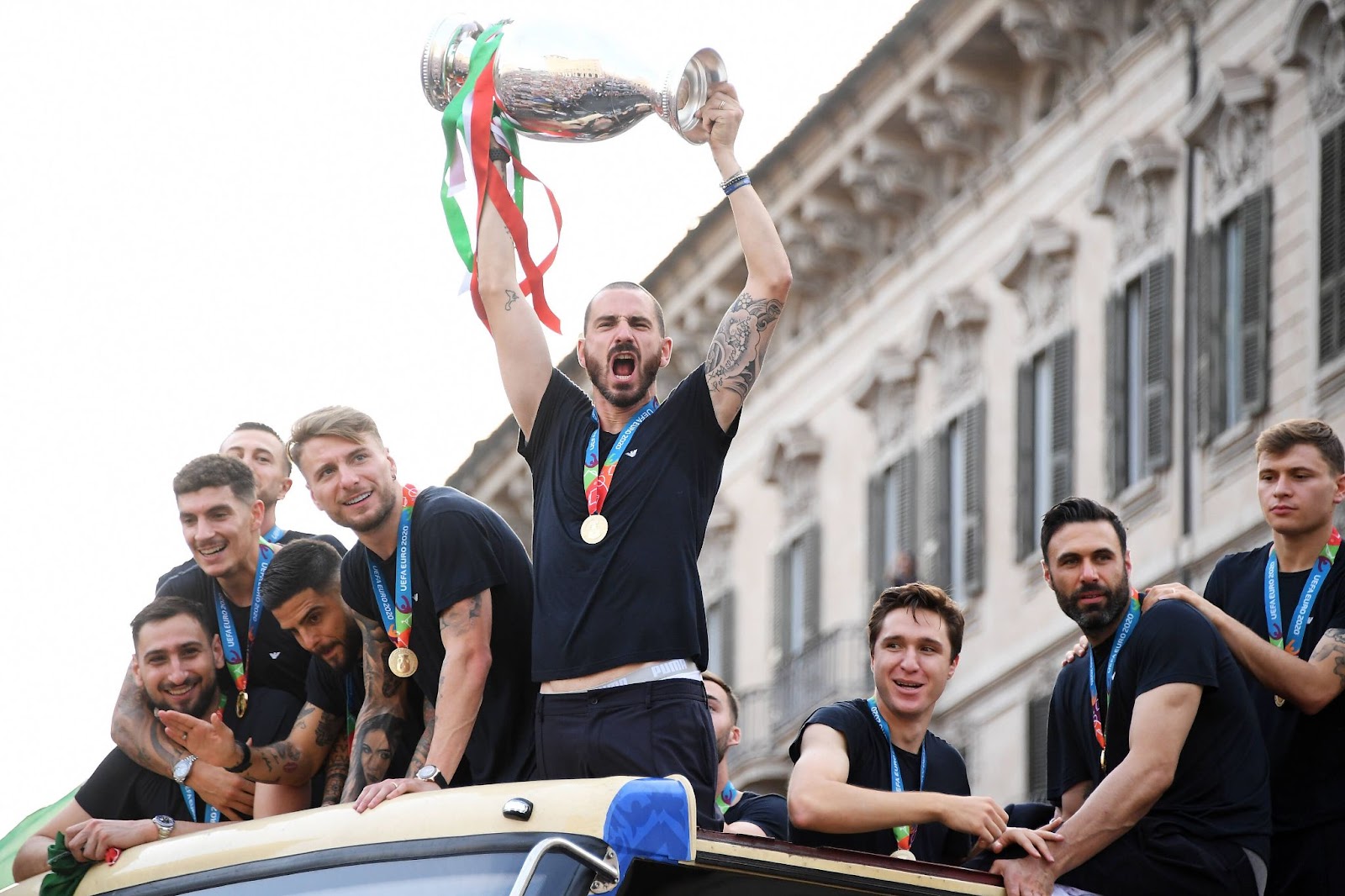 Donnarumma was the hero also during the final, but Mancini was able to rely on strong players, who proved to be as good as the players of the other big teams: Spinazzola was the best European left-back, Federico Chiesa (without a doubt this was also his European Championship, he played very well), Di Lorenzo, Bernardeschi (he scored important penalties, overcoming a difficult time), Locatelli...the list would be even longer, but all of them contributed to the victory and all of them have shown that they are great players.

We always believed in Mancini's national team, who once again proved to be a great coach, one of the best in the world. Chiellini has lifted the cup to the sky, Italian fans are crazy with joy and the parties will continue for a long time, both on the street and on social media, but the real hope is that these magical nights were only the beginning.