Kai Havertz explains how his versatility can benefit Chelsea

This Friday, the Champions League resumes with an exciting clash of European football titans, as Manchester City play host to Real Madrid. City won the first leg 2-1 in the Spanish capital, and so have the score advantage and a couple of away goals to boot. Here, Tribal Football analyses whether they can they hold out and make the quarter-finals for a third straight year.

Usually, a 2-1 away win in a Champions League first leg would give the winning team a wonderful opportunity to defend their lead. Having done the hard work, they could sit back with less responsibility to be the protagonist in the game, defend their own half, and spring counter-attacks onto an opponent chasing the tie. However, this may not be the case here.

Manchester City are not a defensive team in the traditional sense that they want to be the team with the ball, attacking the opponent, rather than the other way around. They had the minority share of possession just twice in the 2019/20 Premier League season, and exactly zero times in this Champions League campaign. Contrast that with Real Madrid, who had four minority shares of possession in La Liga action and have already had less ball than their opponent on two occasions in European games.

Pep Guardiola has an opportunity here to set his team up to defend and counter-attack, unleashing the speed and skill of Raheem Sterling, Gabriel Jesus and Riyad Mahrez on the break. But he probably won't do that, because that isn't his club's modus operandi. What is more likely is a strange dynamic whereby the team needing to score – Real Madrid – does not dominate possession and instead seeks to press and counter.

Zinedine Zidane has a tendency to set his teams up with intense man-to-man defending in big games, and it usually causes problems. He deployed this defensive approach to great effect against a slow Barcelona side in March, leading his side to a big 2-0 win, and he is likely to do something similar against City on Friday.

Indeed, Real's man-to-man pressing (seen in the below graphic) led to their goal in the first leg of this tie. Here, Karim Benzema has put pressure on ball-player Nicolas Otamendi, and Luka Modric is in the process of pressing the receiver Rodri. Vinicius Junior is ready to close down Kyle Walker if he gets on the ball, while in the centre Federico Valverde is staying close to Ilkay Gundogan with the same idea in mind. 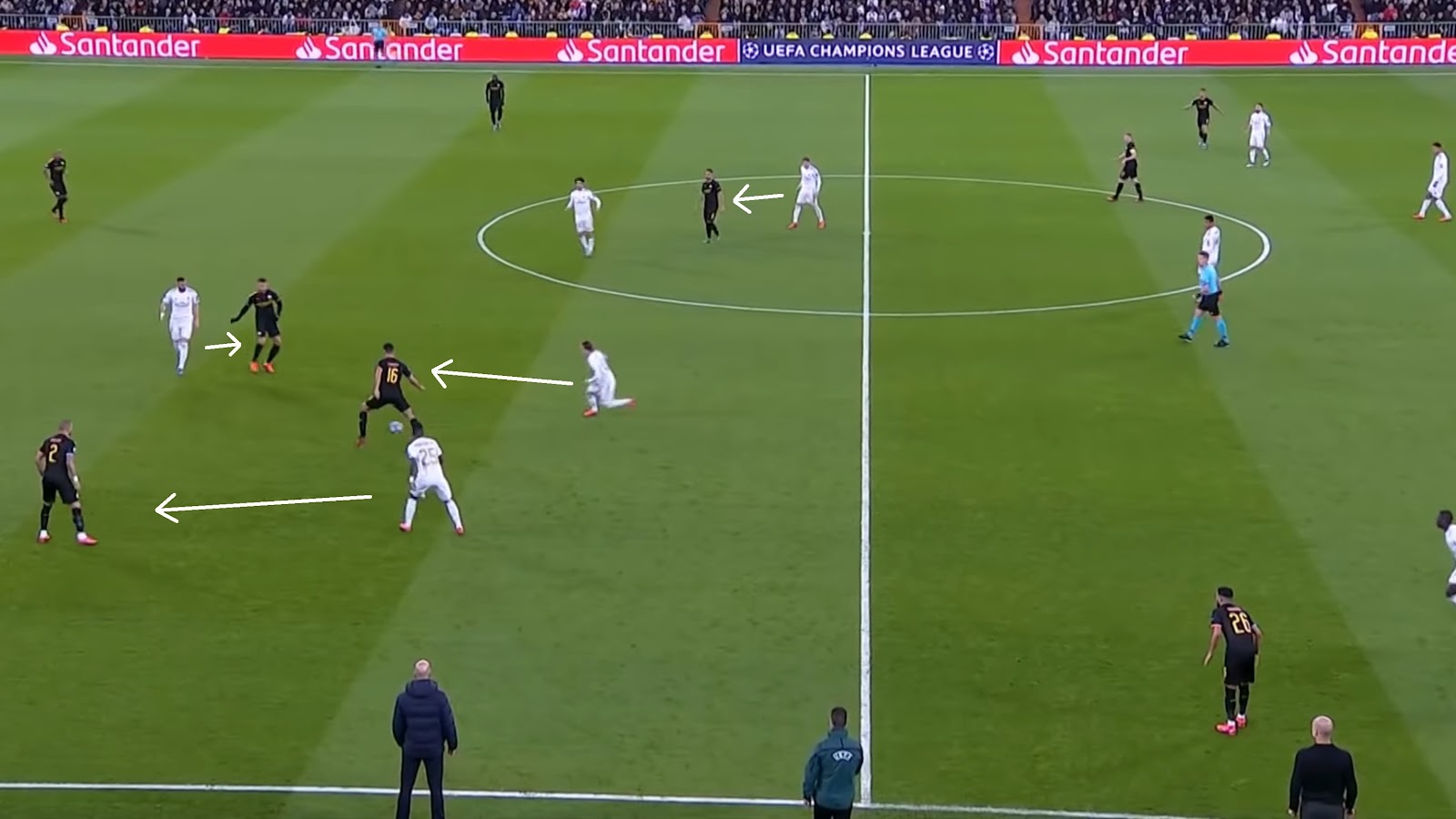 From there, Modric forced a turnover and Real counter-attacked, with Isco applying the finishing touch to give them the lead. This is something they may look to do in the second leg, especially considering how much success Arsenal had with a man-to-man defensive system in their recent FA Cup semi-final win over Guardiola's men.

In that match, Arsenal had Alexandre Lacazette drop back and support the central midfielders in essentially man-marking Kevin De Bruyne and Gundogan in Man City's build-up. This took away City's short passing options, forcing Ederson to go long from back to front.

Real Madrid may take some inspiration from that game and use a similar approach. If they do, they would be wise to find room for Valverde, whose energy, mobility and work rate make him a perfect choice in midfield for a press and counter strategy involving intense man-marking shifts.

Once they regain possession, Real will be looking for a frontline featuring an in-form Benzema and the now-fit Eden Hazard. The Belgian will probably line up on the left and look to come inside and combine with his strike teammate, leaving the flank free for Ferland Mendy to overlap into and provide crossing. Much will depend on the speed and precision of their counters, and combination play between Benzema and Hazard could be tough for City to stop.

Assuming Real do take the more defensive posture in this game, that will place huge importance on how well Eder Militao slots in alongside Raphael Varane at centre-back, considering Sergio Ramos is suspended after his red card in the first leg. Militao only started 10 league games in 2019/20, and his relative inexperience at this level may be something City want to target with the movement of Gabriel Jesus.

In the first leg, the Brazilian started out on the left-hand side. But it's highly unlikely that will be the case in the second leg. Guardiola will also surely want to find a place in his line-up for Raheem Sterling. A more natural winger, the Englishman always wants to dribble at his opposite man and when isolated in 1v1 situations his turn of pace can be devastating. In Madrid it was this very attribute that led him to get beyond Dani Carvajal and force a penalty for Manchester City's winning goal. 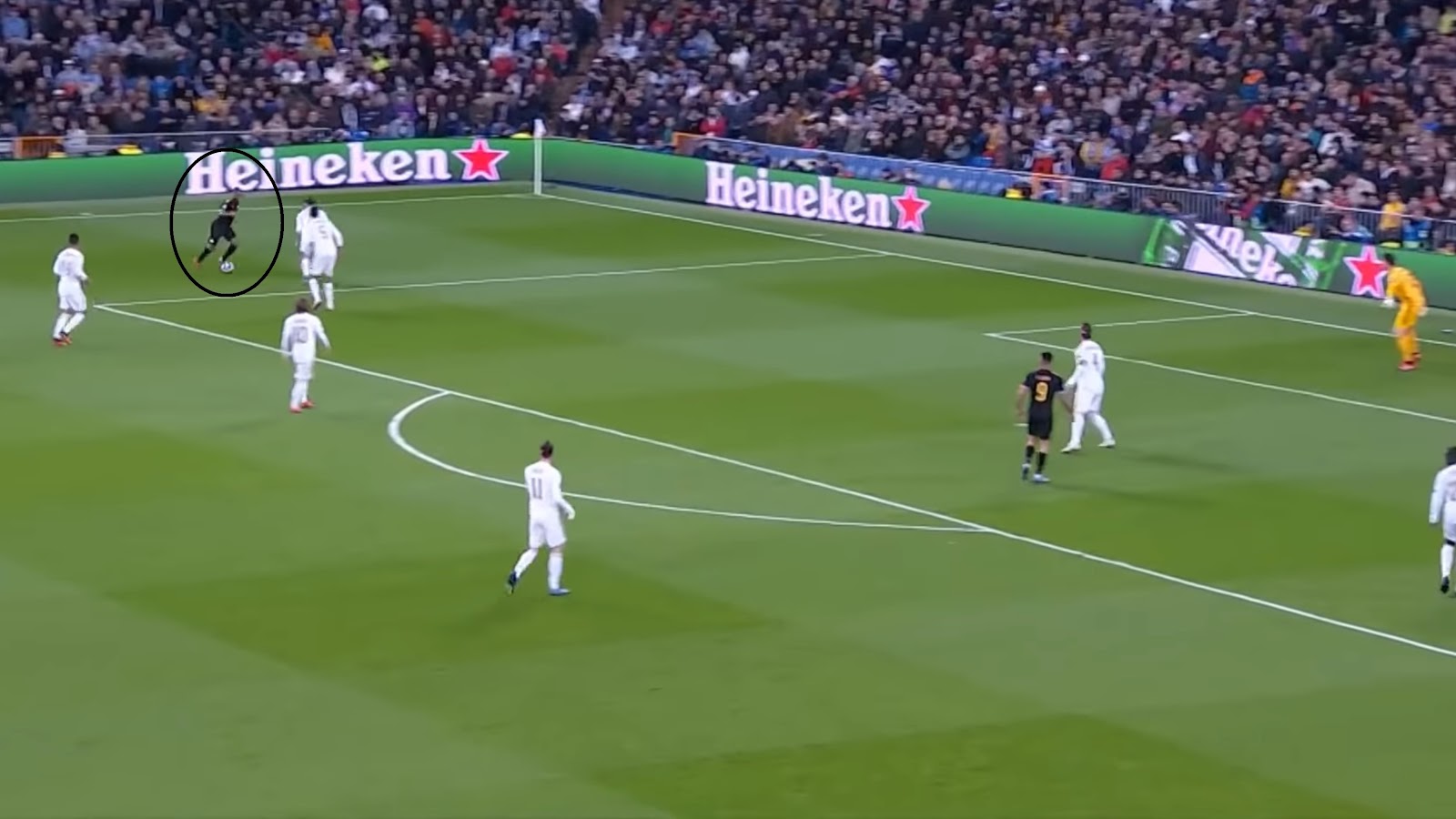 Real Madrid may well go with their preferred big-game man-oriented defensive approach, but City have the quality and variety to out-play this and get at their opposition's Ramos-less back line. If they can break the press, having players like De Bruyne, Mahrez, Sterling and Jesus dribbling and running in behind will be hard for the Spaniards to contain.

Given Real can also be quite loose with their attacking structure, there will also be transition opportunities for City to exploit even if they do dominate possession. With a one-goal advantage and two away goals in the bank, the Premier League runners-up should have too strong of a head-start to lose their clash with the Spanish champions.