COMMENT: David Luiz just let it slip. And to be fair, his words ring true when considering the past two months. Arsenal is in rebuild mode... again. Question is: are they treading water or slipping further under...?

Now well into his second month since coming off contract at the Gunners, Luiz offered a stark warning to the support of the planning going on behind the scenes. Trophies. Title challenges. They're not the priority. Not this season. The club has reverted to yet another transitional phase.

"Both of us decided to split," declared Luiz this week. "I came for two years and the aim was to win something, which I did (the FA Cup and Community Shield).

"Now, I think the club has a different project for the long term. They have different ideas. My idea is to win, win, win as soon as possible."

So he wasn't prepared to hang about. With age creeping up on him, the recently-turned 34 year-old wasn't interested helping usher through a team rebuild. Luiz is off. And to be fair to the Brazilian, from what we've seen of Arsenal's work in this summer market, his claims chime with the actions of the club's front office.

On paper, it's difficult to argue Arsenal are in a stronger position than this time last year. Perhaps in projection. Perhaps on potential. The most ardent Gunners fan can reason with the promise offered by their three notable signings this summer. But on paper, it's a slog trying to suggest Ben White, Albert Sambi Lokonga and Nuno Tavares have what it takes to catapult Arsenal into top four contention this season.

Bags of potential, sure. Players with a huge margin for improvement, no question. But for the here and now. For what is required to make sure a first season without European football in 26-years doesn't turn into a second. None of this trio offer any real confidence.

And management need to be careful. They've heaped a lot of expectation on these young shoulders, particularly £53m man White. Again, the potential is there. Good judges are convinced of it. But management are effectively asking a 23 year-old, with just the one full season of Prem football under his belt, to be their leading centre-half. To not only justify his price-tag, but to hold a back four together that has leaked like a sieve whenever facing top opposition. 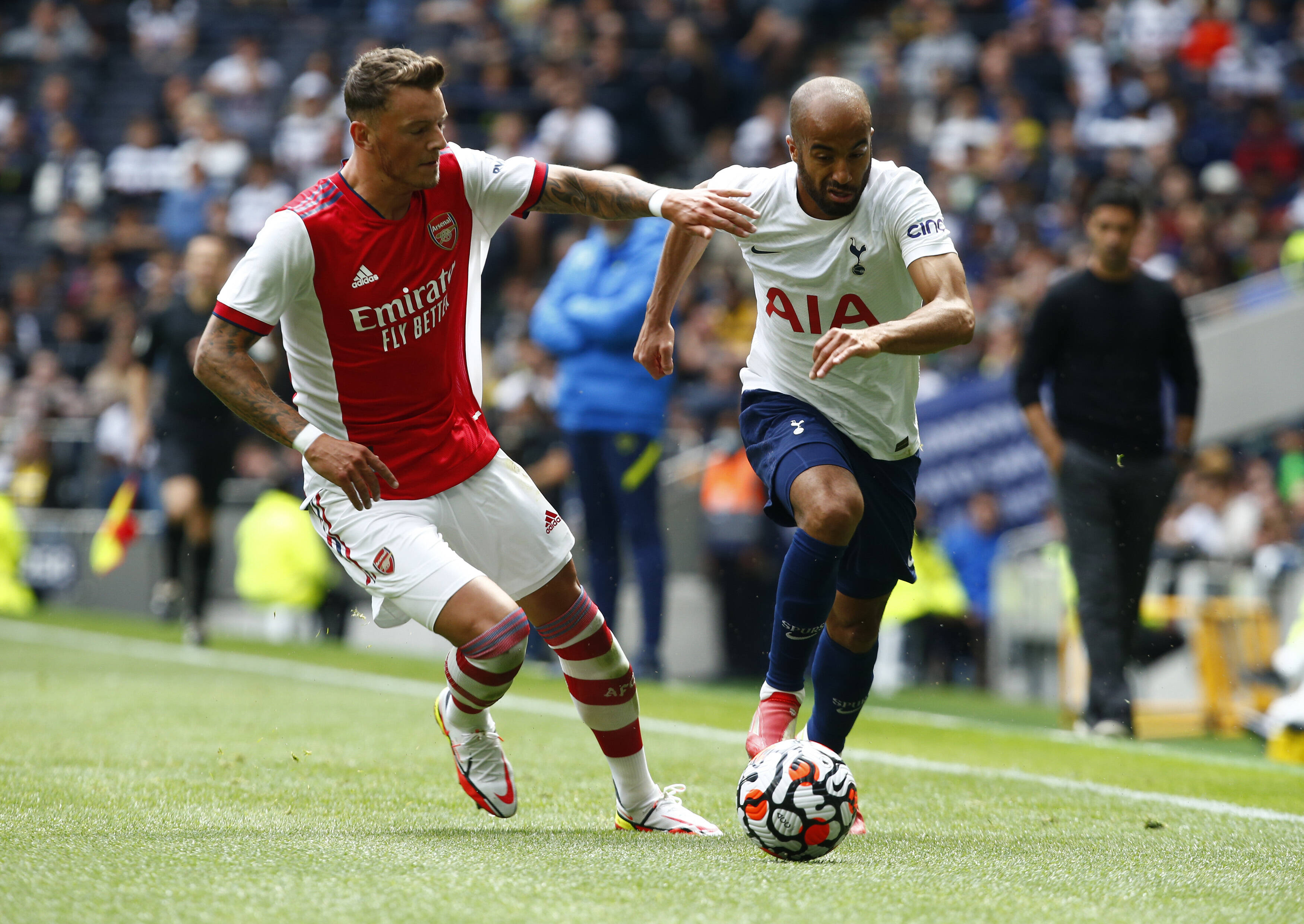 Ben White in preseason action against Tottenham and Lucas Moura

There's no Lewis Dunk or Adam Webster for White to work alongside at Arsenal. The kid is being thrown in the deep end - and expected to swim immediately.

For Tavares and Lokonga, expectations are eased - which is good for both teens. But for the team. For it's progress. There's nothing positive about it. Both youngsters will be introduced gradually by Mikel Arteta. The manager won't expect them to be matchwinners. But for a team that finished eighth last season, bringing through more kids isn't going to offer any quick fix.

So it'll be thrown back onto the Arsenal support. How they react. Online and IRL. Beyond any new signing. Beyond any new contract. The biggest factor weighing on Arsenal's progress this season will be the return of their support and the reaction of a full Emirates stadium.

There'll be a honeymoon - no matter the result at Brentford on Friday night. Fans will be simply happy to see their team in the flesh again. But it won't last long if things don't click for Arteta. Indeed, would the Basque still be manager if last season's results had been played out in front of a full home ground?

For some teams, empty stadiums worked against them last term. For others, it was a boost; a huge boost. And for Arteta's players, avoiding such a gauntlet has offered some breathing space this summer. With a sympathetic Gooners Boot Room in the media, the demands were softened. The criticism cooled. The support, particularly that toxic section of the fanbase, were kept at the margins.

But now they're back. And they'll be demanding. Of the players. Of the board. And of the manager. Arteta, now entering a third season in charge, is no longer the rookie appointment. The anger towards the Kroenkes over their Super League attempt is still smouldering. And there remains the tension between the support and certain players, including Granit Xhaka, who now appears ready to sign a new contract and stay.

We've argued this in previous columns and it still appears to be holding up. This Arsenal. The board. The front office. It's living off the badge. Off what the Gunners crest represents. There's nothing tangible this administration can put forward to suggest they're on a winning path.

And the club's actions this summer suggest nothing has really changed. At least not for the positive. As David Luiz let us all know this week, Arsenal are again in rebuild mode. Yet, even by treading water it won't be good enough given last season's campaign.