Both Tottenham Hotspur and RB Leipzig have undergone managerial change this season. Julian Nagelsmann took charge of the German club last July and turned them into Bundesliga contenders. Around four months later Jose Mourinho arrived at Spurs and galvanised them, taking them from 14th in the Premier League table to their current fifth-place position. Now the two teams and their managers are set to face off in a tactically exciting Champions League round of 16 clash.

This is Tribal Football's tactical preview of the tie.

Mourinho's first game as Tottenham manager was a 3-2 away win over West Ham. In that match, the way Spurs built possession was different to what was seen under Mauricio Pochettino. Right-back Serge Aurier pushed on down his flank, but the left-back stayed deep alongside the two centre-backs and formed a back three during build-up.

Two central midfielders played in front of this temporary back three, offering them short passing options, while Aurier and the left winger provided width. The right winger then came inside and played more between the lines along with the striker and Dele Alli. Essentially, Mourinho's 4-2-3-1 became a 3-2-5 when his team had the ball. West Ham couldn't cope with this, but they aren't the only ones who have struggled. 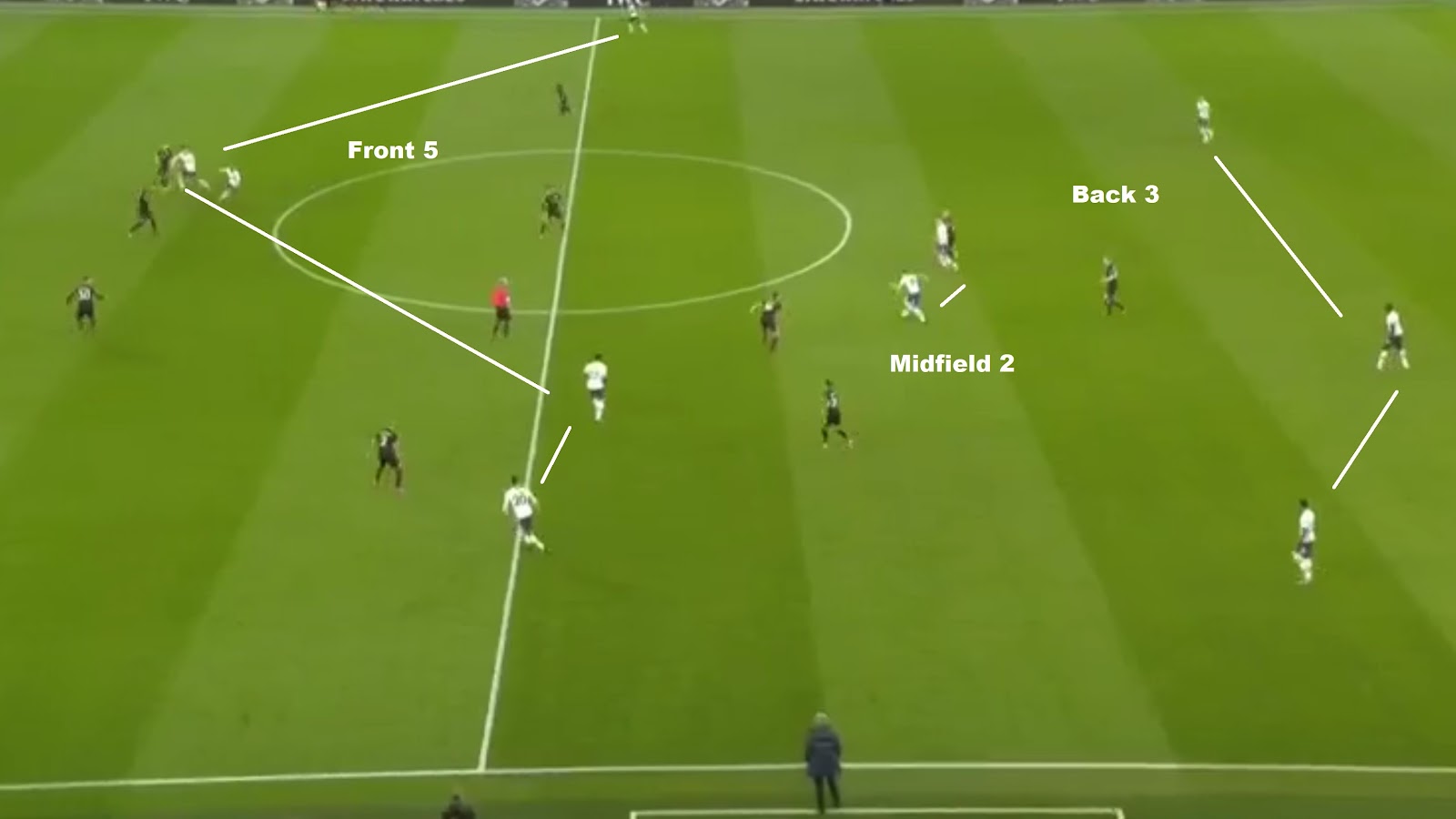 The back three gives Spurs an extra man in their first line of build-up, which challenges the opposition. In order to press Tottenham, the extra man must be accounted for – the opponent either commits an extra man to their pressing, or they completely change the of their press.

Fortunately for Leipzig, in Nagelsmann they possess a manager who is comfortable tailoring his team's pressing style to the opposition. This was seen recently in the 0-0 draw away to Bayern Munich, where Leipzig lined up in a defensive 5-2-3.

In that game Leipzig's wingers pressed Bayern's centre-backs from out to in, simultaneously cutting off the passing lanes out to their full-backs, while Dani Olmo covered one of Bayern's midfielders. Behind, Leipzig's central midfield duet of Marcel Sabitzer and Konrad Laimer stepped up to support the press, helping Olmo to cover Bayern's midfielders. 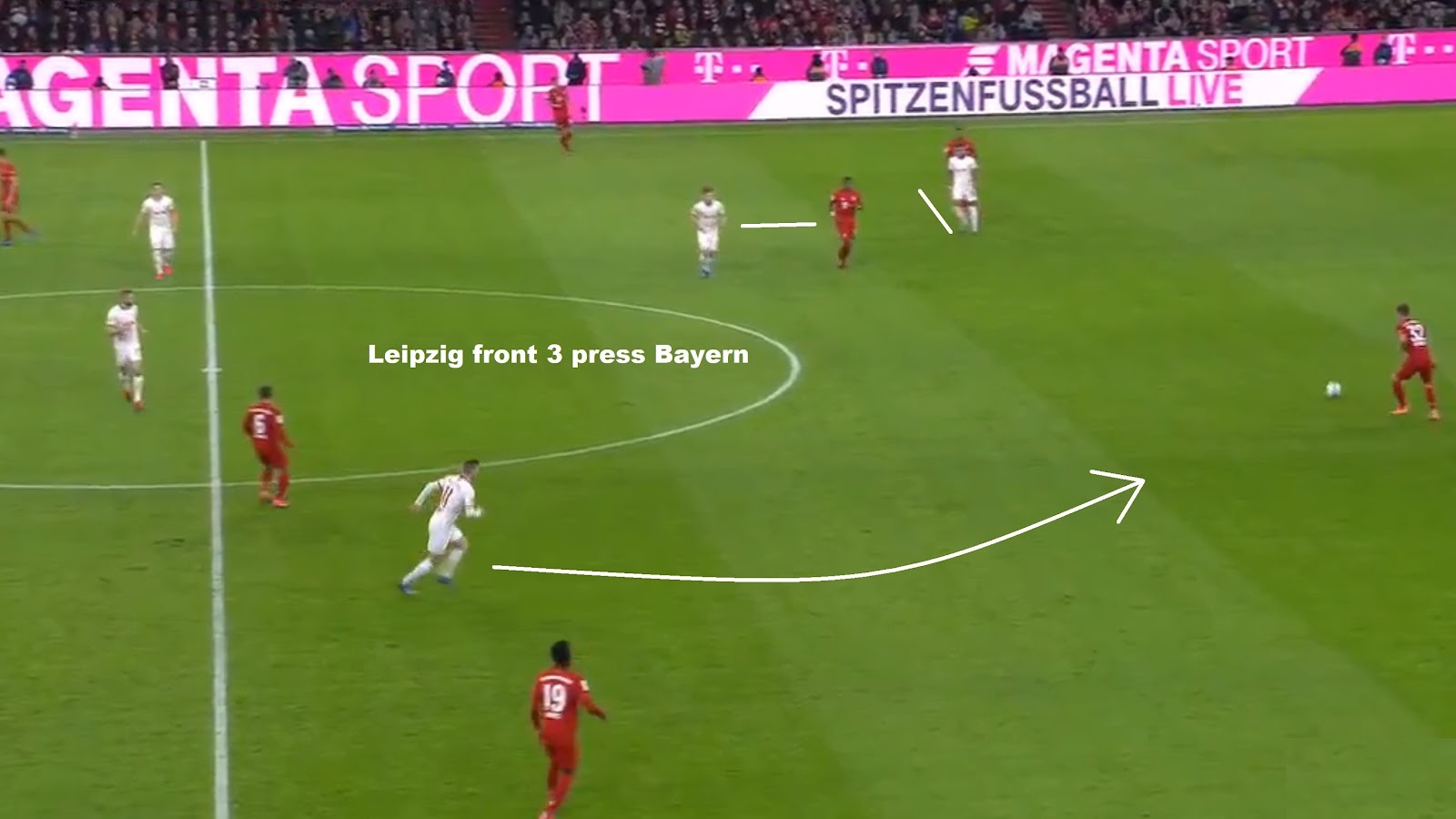 While he likes to tinker tactically, Nagelsmann may decide to stick by this 5-2-3 against Spurs – particularly for the first leg in London, where he'll want to secure an away goal or two to take back to Germany. As discussed above, Spurs build-up in what is essentially a 3-2-5 shape, so if Leipzig stick with the same system they used versus Bayern they will basically go man-to-man all over the pitch.

It's a risky strategy, but Tottenham's defenders aren't particularly dynamic or quick-footed, so isolating them and forcing 1v1s by applying man-to-man pressure from a front three featuring Timo Werner (no Bundesliga striker averages more tackles per 90 minutes than him) could force turnovers and create dangerous counter-attacking opportunities high up the pitch for Leipzig.

CAN SPURS GET IN BEHIND LEIPZIG'S BACK LINE?

As well as the change of attacking shape, Mourinho has altered the types of attacks Tottenham utilise. They are now much more comfortable going direct and bypassing midfield with long balls from back to front. These direct attacks are made dangerous by the players starting and finishing them.

When attacking, Toby Alderweireld becomes Tottenham's central playmaker responsible for launching the long balls over the top. He has an excellent passing range and can accurately pick out teammates over long distances, so he excels in these situations. It's no surprise that only three Spurs players – Son Heung-min, Aurier and Alli – have more assists than the Belgian in league action this season.

His accurate long-range passes over the top of defences aren't random balls into space – they are specifically targeted to find the runs of Alli and Son. Often cutting in from a left wing starting position, Son can be difficult for opposition defences to detect and his pace makes him impossible to catch if he gets a head-start on a defender. Alli's runs, meanwhile, are all about good timing and decision-making. He has a knack for ghosting in the channels between defenders to get in behind, and once in on goal he is a reasonably efficient finisher. 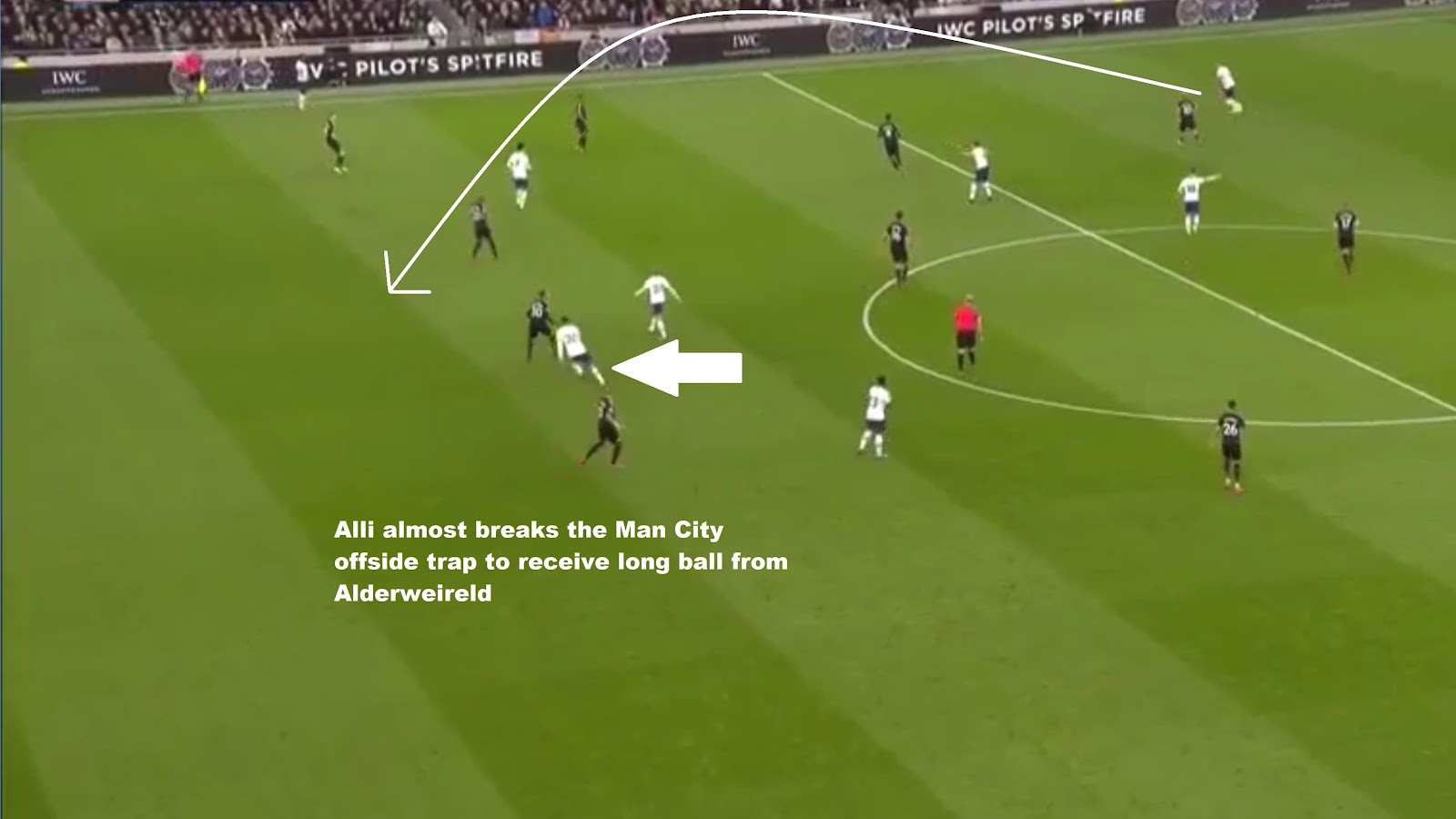 If Leipzig press the way they did against Bayern, they may give Alderweireld too much time on the ball to pick out these long passes for Alli and Son and Spurs could get in behind Leipzig's defensive line. In order to stop these attacks, Leipzig will have to have their central attacker – whether it be Olmo again or Werner – stay close to Alderweireld and press him aggressively when the ball goes his way. This could force him into shorter, sideways passes and take away Tottenham's direct attacking approach altogether.

HOW WILL SPURS DEFEND?

Under Mourinho, Spurs have generally defended in a 4-4-2 mid-block with a focus on retaining shape and pressing only on specific triggers like inaccurate, slow or loose passes from the opposition. Sometimes, as against Manchester City, they make even less effort to press, with their front two simply being positional and covering the opponent's No.6 to reduce their build-up options through the centre and force the opposition wide.

Against Leipzig, Mourinho may want his side to be slightly more assertive. While comfortable dribbling forward, Leipzig's main centre-back Dayot Upamecano can be panicked by pressure and make bad short passing decisions, particularly when forced onto his left foot. Pressing high could force him into giveaways and set up counter opportunities for Tottenham.