This week, we review the CONCACAF U-20 Qualifiers for the next FIFA U-20 Women's World Cup Finals this summer in Costa Rica. We also announce the 44th and last USL W-League team for this summer.

Next week, we will look at some interesting transfers during the winter transfer window in Europe.

This week, we review the CONCACAF U-20 Qualifiers for the next FIFA U-20 Women's World Cup Finals, to be held this August in Costa Rica, which were originally scheduled to be held in the country in 2020 but was postponed due to COVID. The CONCACAF final round of qualifying involved 20 teams and was held in the Dominican Republic. Oddly, three of the top four teams in each group advanced to the Round of 16—instead of the top two going to the Quarterfinals—and then were joined by four CFU qualifying stage winners; Bermuda, Cayman Islands, Curacao and Surinam, to start a 16-team knockout stage.

The U.S., Mexico and Canada, as expected, qualified for this summer's age group FIFA Finals, but the path was more convoluted than in past years and there were some surprises along the way, particularly with Puerto Rico narrowly falling 2-0 to Canada in the third-place match for the last U-20 World Cup Qualifying spot. We also look at some of the rosters, with sizeable numbers of players on some of the final four teams playing collegiately in the States.

Note: For the Finals this summer, Costa Rica is the host and has qualified along with the U.S., Mexico and Canada from CONCACAF, Japan, DPR Korea and Korea Republic from AFC, New Zealand from Oceania, and France, Germany, Netherlands and Spain from UEFA.

In the first stage, Group E saw the U.S. (9 points), Puerto Rico (6 points) and the host nation D.R. (3 points) advanced to the knockout stage over Nicaragua (0 points). The Americans were dominant with a 20-0 goals for/goals against record in their three games.

In Group F, Mexico advanced with a 13-0 goals for/goals against record and 9 points, while Panama (4 points) and Guyana (3 points) also moved on to the knockout stage over Honduras (1 point).

In Group G, Canada (9 points and a 16-0 goals for/goals against tally), El Salvador (6 points) moved on as well as did CFU nation St. Kitts and Nevis (3 points), while Trinidad and Tobago (0 points) were eliminated in yet another sign that the traditional powerhouse in the CFU needs to really invest in and reinvigorate their women's national team program from top to bottom. At the senior national team level, T&T still has a chance to qualify to the CONCACAF W Championship Finals (which doubles as 2023 WWC regional qualifiers) but Guyana holds the advantage with a much superior goal difference.

In Group D, Guatemala (7 points) and Haiti (5 points) were both undefeated and moved on, as did Jamaica (4 points), with Cuba (0 points). For the latter, Cuba's last place finish was a surprise and such a difference from their senior national team of late, which has been strong in their regional full national team CONCACAF W Champions/2023 Women's World Cup qualifiers.

In the Round of 16, the CFU winners from the preliminary round who were added to the 12 group winners all lost, with Curacao, Cayman Islands and Surinam surrendering 9, 13 and 14 goals with none in reply against Mexico, Canada and the U.S. respectively. Bermuda also didn't score a goal but lost only 2-0 to Guatemala, who scored a pair of goals around the hour mark. The format in 2022 for CONCACAF is an interesting concept and does give the CFU countries more games, but still is a bit cumbersome and adds to the length of the tournament—it certainly wouldn't be practical at the senior level, where group play in the Finals would decide all knockout stage teams. Perhaps, if CONCACAF wants to continue with this format at the youth national team level in the future, they could bring in the qualifying group winners into a second group stage to give them more games and a greater chance of success than facing the top four teams in the DR's group stage. As it was set up this time, all four nations had to travel to Santo Domingo for one game.

In the semifinals, U.S. repeated their 7-0 group stage win over Puerto Rico with another 7-0 victory as Simone Jackson recorded a straight hat-trick for goals number 5-7 as a second half sub. Michelle Cooper had a brace with 35th and 41st minute goals as well as an assist and then was subbed out at halftime for Jackson. For Puerto Rico, goalkeeper Ariana Anderson, who plays for the Dallas-area youth club Solar SC, performed well and had 14 saves. In the nightcap, Mexico defeated Canada 1-0.

In the Championship Final, the U.S. defeated Mexico 2-0 to win the title. The Americans have won six of nine previous Concacaf Women's U-20 Championships that have crowned a champion, the most of any nation, and reached the final every time, winning five of the last six titles. The U.S. has now qualified for all 10 FIFA Women's World Cups held at this age level (plus the 2020 FIFA U-20 Women's World Cup, which was cancelled due to the global COVID-19 pandemic). The first two Women's World Cups were staged as U-19 events in 2002 and 2004, and the USA has now qualified for the U-20 WWC in 2006, 2008, 2010, 2012, 2014, 2016, 2018 and 2022. Michelle Cooper led the tournament in scoring with eight goals followed by Canada's Olivia Smith and American Andrea Kitahata, who tied on second with seven. Mexico's leading scorer was Aylin Avilez with six, who was tied for fourth with Americans Simone Jackson and Avery Patterson.

Canada defeated Puerto Rico, also by a 2-0 score line, to capture third and the final regional FIFA WWC U-20 bid. Canada's head coach Cindy Tye—a native of Nova Scotia in the eastern portion of the country, said, "We came here with a mission to qualify and it was an entire team effort all the way through the tournament. We kept our processes consistent and that helped because we asked our players to be adaptable and flexible through a long tournament. It was also a credit to our staff and they kept things steady as the players just took it one step at a time and got better with each game. This tournament is just the start of this group's journey and we are excited to see where they will be when the FIFA U-20 Women's World Cup kicks off in August." This qualification success was the 14th time that Canada have qualified for a FIFA women's youth tournament since they were introduced in 2002, notably eight editions of the FIFA U-20 Women's World Cup and all six editions of the FIFA U-17 Women's World Cup. Canada will next compete in the 2022 CONCACAF Women's Under-17 Championship from April 23 to May 8 in the Dominican Republic. 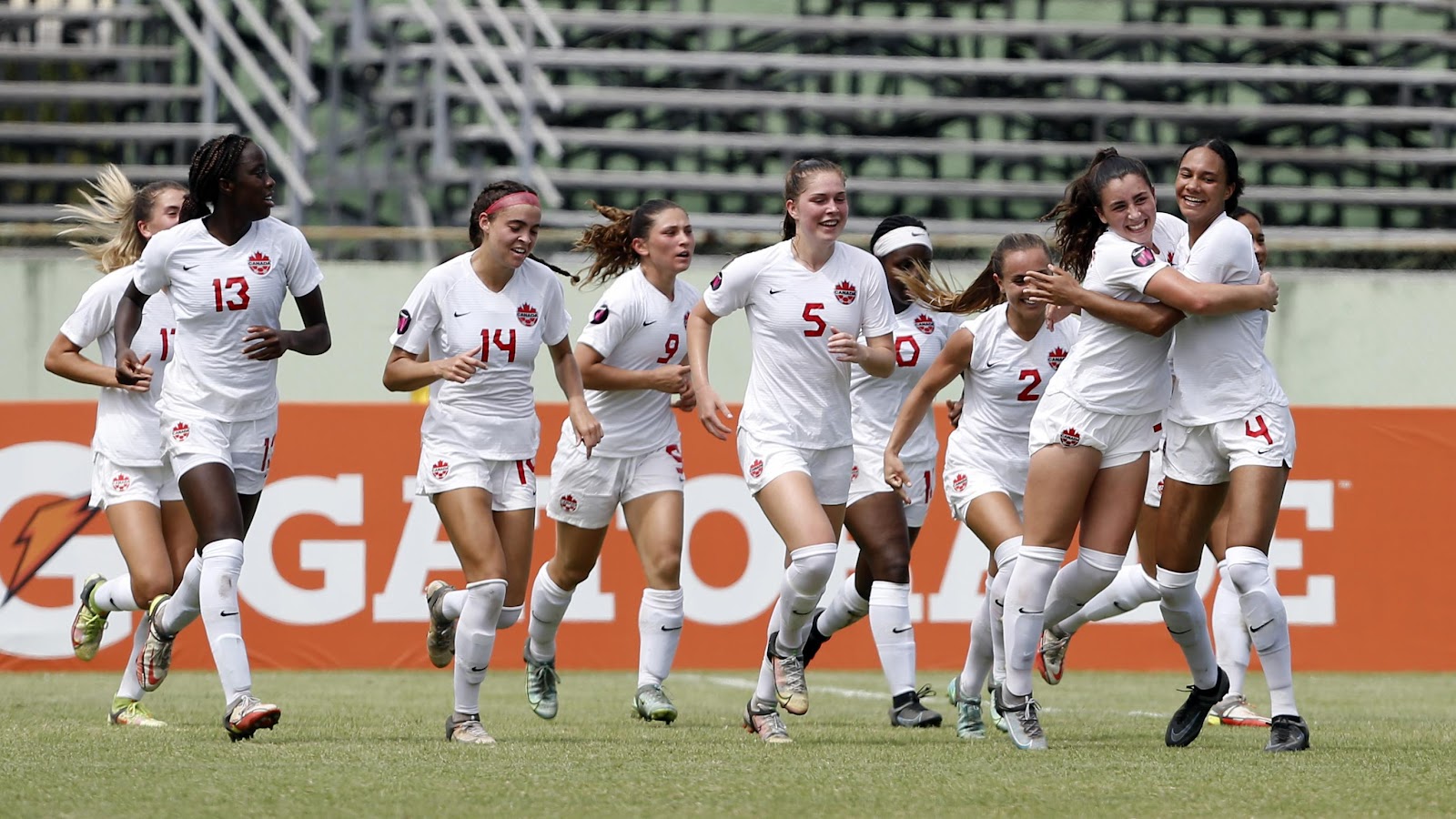 Canada's Women's National Team was successful in qualifying for the 2022 FIFA U-20 Women's World Cup in Costa Rica this summer in CONCACAF regional qualifying in March 2022, held in the Dominican Republic (Photo courtesy Canada Soccer).

The U.S. CONCACAF U-20 Championship roster was:

For runners-up Mexico, sixteen of the 20 players were based in Mexico, led by four players from Chivas Guadalajara. Two are based in England as midfielder Silvana Flores is with Tottenham Hotspur and defender Tatiana Flores plays with Chelsea. Two players compete collegiately in the USA compared with seven players were based at U.S. colleges in the 2020 tournament. Eleven players scored for Mexico at this tournament, led by midfielder Aylin Avilez with six.

This was Puerto Rico's second appearance at the CONCACAD Championship after making its debut in 2020. In 2020, PR finished third in Group D and fell in the Round of 16 on penalties to Trinidad and Tobago. For Puerto Rico, all but two on the roster were based with clubs or colleges (8) in the U.S., with three being teammates at Georgia Southwestern State University. Only two players are currently based in Puerto Rico, with one at the Puerto Rico Sol club, which we recently featured (see last month's: The Week in Women's Football: CONCACAF focus; NWSL sign Mexican internationals; Puerto Rico Sol breaks world record - Tribal Football).

For Haiti, who fell to the U.S. in the quarterfinals by a 6-0 score line, this was their sixth appearance at the tournament. Les Grenadières have reached the semis of the last two tournaments, finishing third in 2018 to qualify for the U-20 WWC and also finishing third by points in 2020. In 2020, Haiti lost on penalties in the semifinals; after drawing Mexico 1-1 through added extra time, the Haitians fell 4-2 in the shoot-out. Six players from this U-20 roster were called up to Haiti's senior National Team during the February international window: goalkeepers Nahomie Ambroise and Madeline Fleuriot, defender Maudeline Moryl plus forwards Not Ganthier, Milan Pierre and Meghane St-Cyr. Seventeen of the 20 players are based in Haiti, with 10 at the Academie Camp Nou. Two currently play in the USA at Miami's Weston FC (Ganthier) and the University of Maryland (Pierre) while one is based in Canada (St-Cyr).

Last month, we listed 43 clubs that would play in the USL W-League this summer for the first year of the league's relaunch, which ran for two decades from 1995 (after holding a four team finals tournament in 2014 in Cincinnati as a demonstration, which this reporter attended) and folded after the 2015 season; (see: The Week in Women's Football: NSWLPA reach historic agreement; USL relaunch; Asian Cup results - Tribal Football). The league has added one more team as their 44th side—McLean Soccer—and has closed the entry for any new teams for 2022. McLean Soccer was founded in the early 1980's in McLean, Virginia and has since become an integral part of Virginia's soccer landscape. The club consists of both a recreation and travel program. McLean Soccer is committed to ensuring that each player achieves their soccer goals, realizes their full soccer potential and ultimately, falls in love with the game of soccer. Currently, McLean Soccer has approximately 3,200 players, 1,200 of which are travel team players. McLean will join Christos FC, Eagle FC, Northern Virginia FC and Patuxent Football Athletic in the Mid-Atlantic Division.

Over the past 14 years, McLean Soccer has had 245 players commit to furthering their college careers at NCAA Division I, II, and III programs, many of whom have moved into the professional ranks. In addition, the club has had several players called into United States and Italian Youth National Team squads, as well as alumna including: Andi Sullivan (United States), DiDi Haracic (Bosnia & Herzegovina) and Marlo Sweatman (Jamaica), who compete at the senior international level.