The Thiago Effect: How Liverpool will be transformed by their new star man

Earlier this month, Liverpool signed Thiago Alcantara from Bayern Munich for a reported fee of £20 million. Bringing in a world class, Champions League-winning midfielder for what – in the luxuriant world of modern elite football, at least – is a relatively small sum should be considered brilliant business. However, Thiago is a completely different type of midfielder to what Liverpool had before, which means there are big questions to be answered about what his arrival means for the team.

How will he fit in to Jurgen Klopp's system? Will he improve Liverpool's chances of retaining their Premier League title? We at Tribal Footballwill answer these questions, and more, in this article.

Days after joining Liverpool, Thiago made his debut for the club, coming on as a half-time substitute for Jordan Henderson away to Chelsea. In theory it was quite an easy outing: by the time of his emergence from the bench, Chelsea were down a man and Liverpool were dominating possession anyway (they ended the match with a 61% share). However, these are exactly the situations and games Thiago was signed for.

With Chelsea even more passive in their defence than they were with 11 men on the pitch, Liverpool had a lot of time on the ball. Playing in the same position as his shirt number, No.6, Thiago could collect from the centre-backs and dictate his side's build-up. This represented the sort of role he will likely be asked to play going forward: against domestic underdogs defending in a low block, he can get on the ball and help Liverpool open up the opposition.

Thiago showed glimpses of both his qualities and his tendencies in his first half of football for Liverpool. He always looked for the ball, moving across and up/down to make himself available to Virgil van Dijk, Fabinho, Trent Alexander-Arnold and Andy Robertson. We see an example of this in the below sequence.

He initially receives inside left from Robertson. 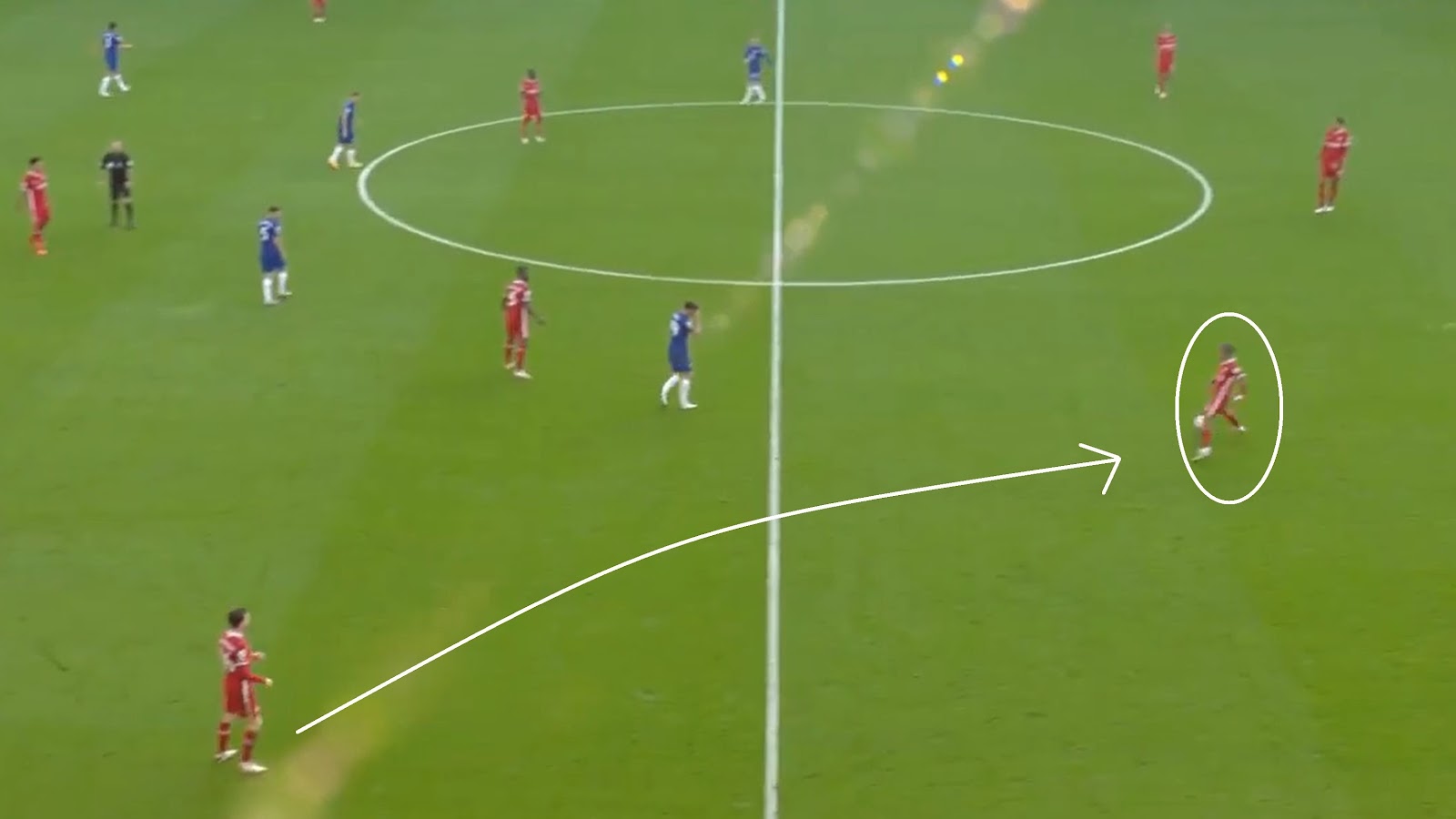 He then turns and exchanges with Van Dijk, before spreading to Fabinho on the right. 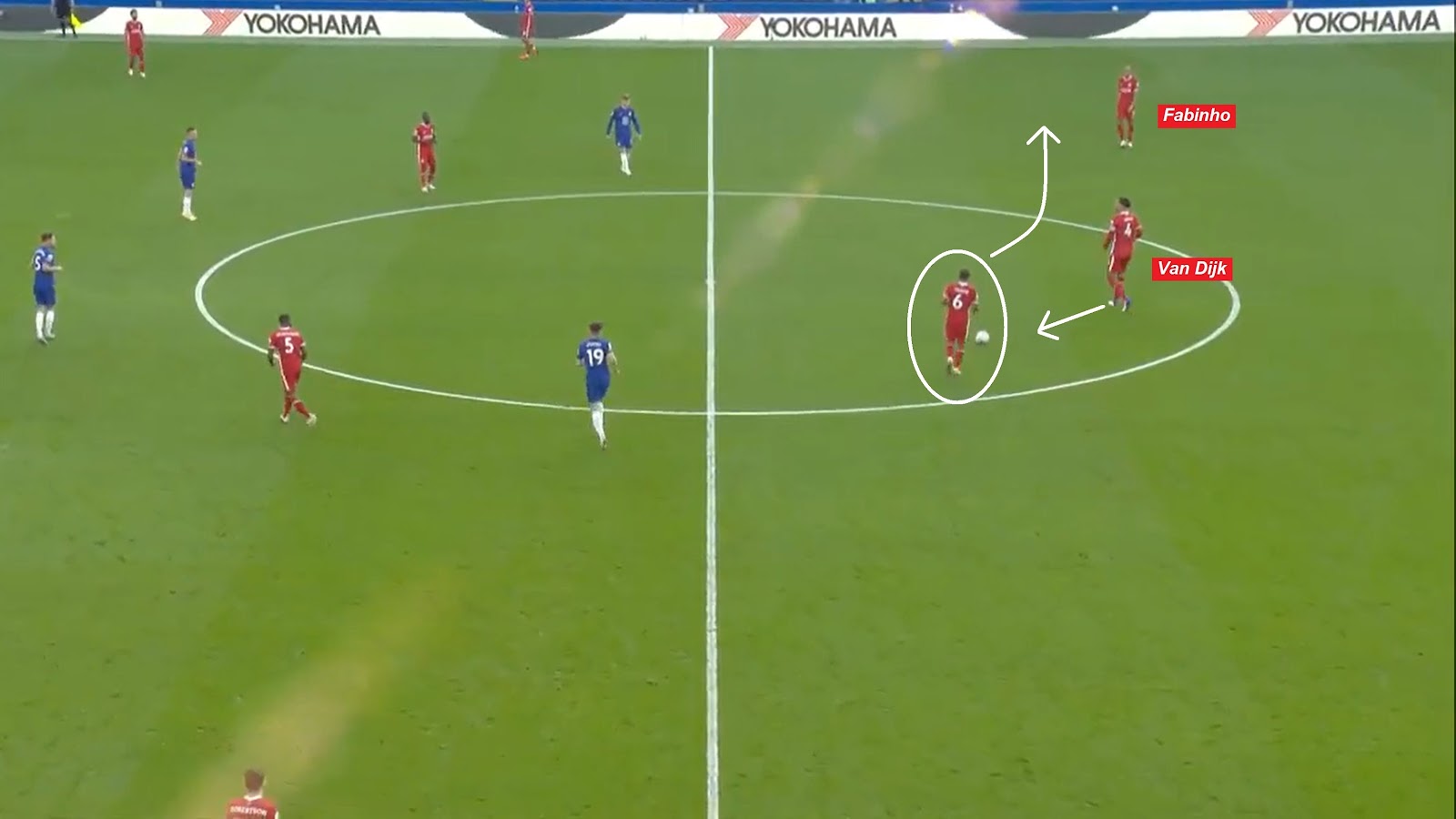 After Fabinho passes down the line to Alexander-Arnold, Thiago then moves over to make himself available for the pass inside from Liverpool's right-back. 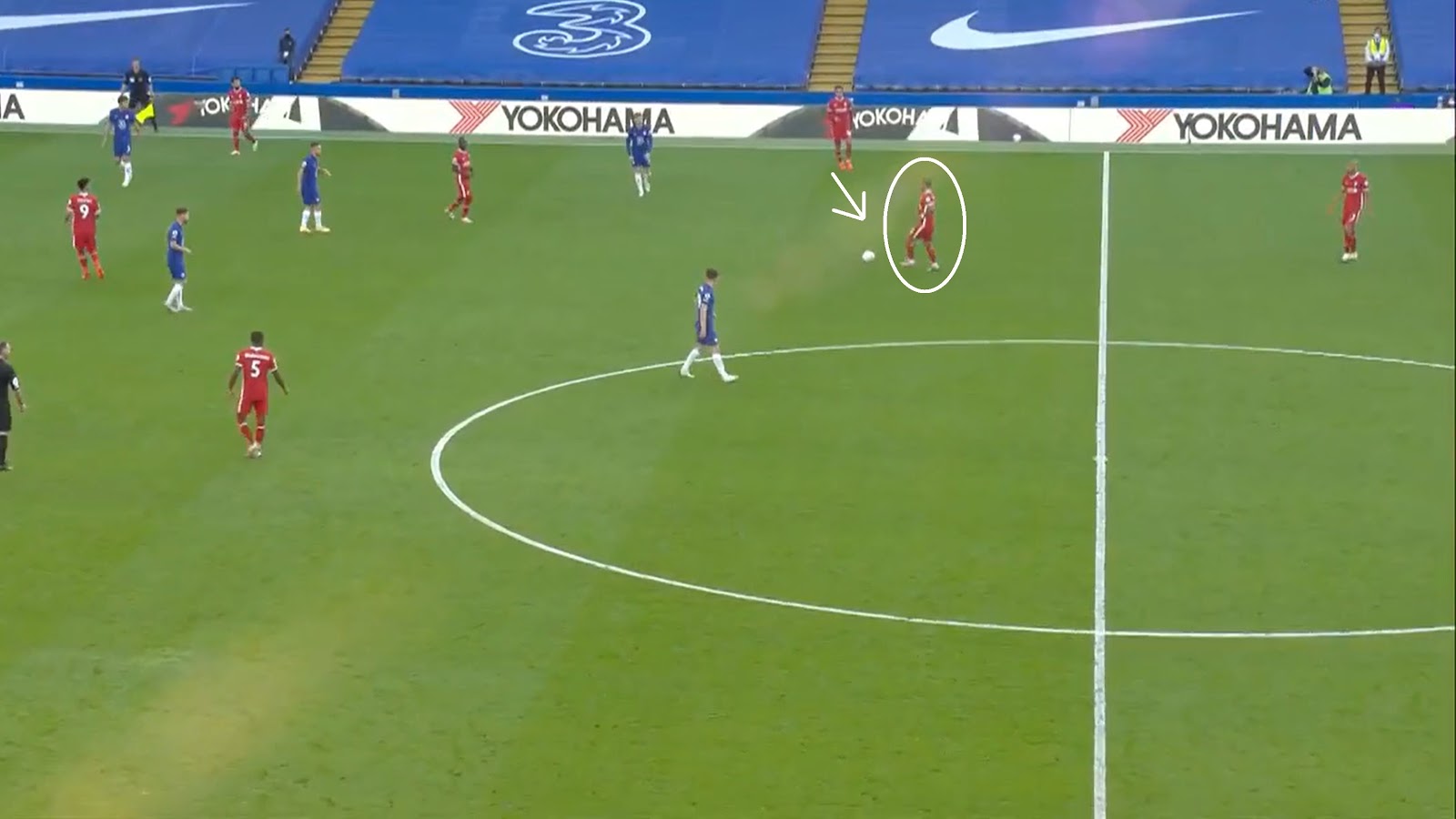 This constant shifting towards the ball, combined with a knowledge of how to find little pockets even in congested areas with opponents all around him, meant Thiago was able to receive and control Liverpool's build-up with his passing. Sometimes he went for quick one-touch play to keep the tempo high; at other times he looked to open up the game with a switch to the far side or with a more progressive ball. In these moments, his ability to disguise the pass was a threat to Chelsea.

Here he opens his body up as if to play a simple pass wide to Alexander-Arnold, but he actually plays the ball over the top of Marcos Alonso for the run in behind of Mohamed Salah. Alonso cuts it out, but only just. 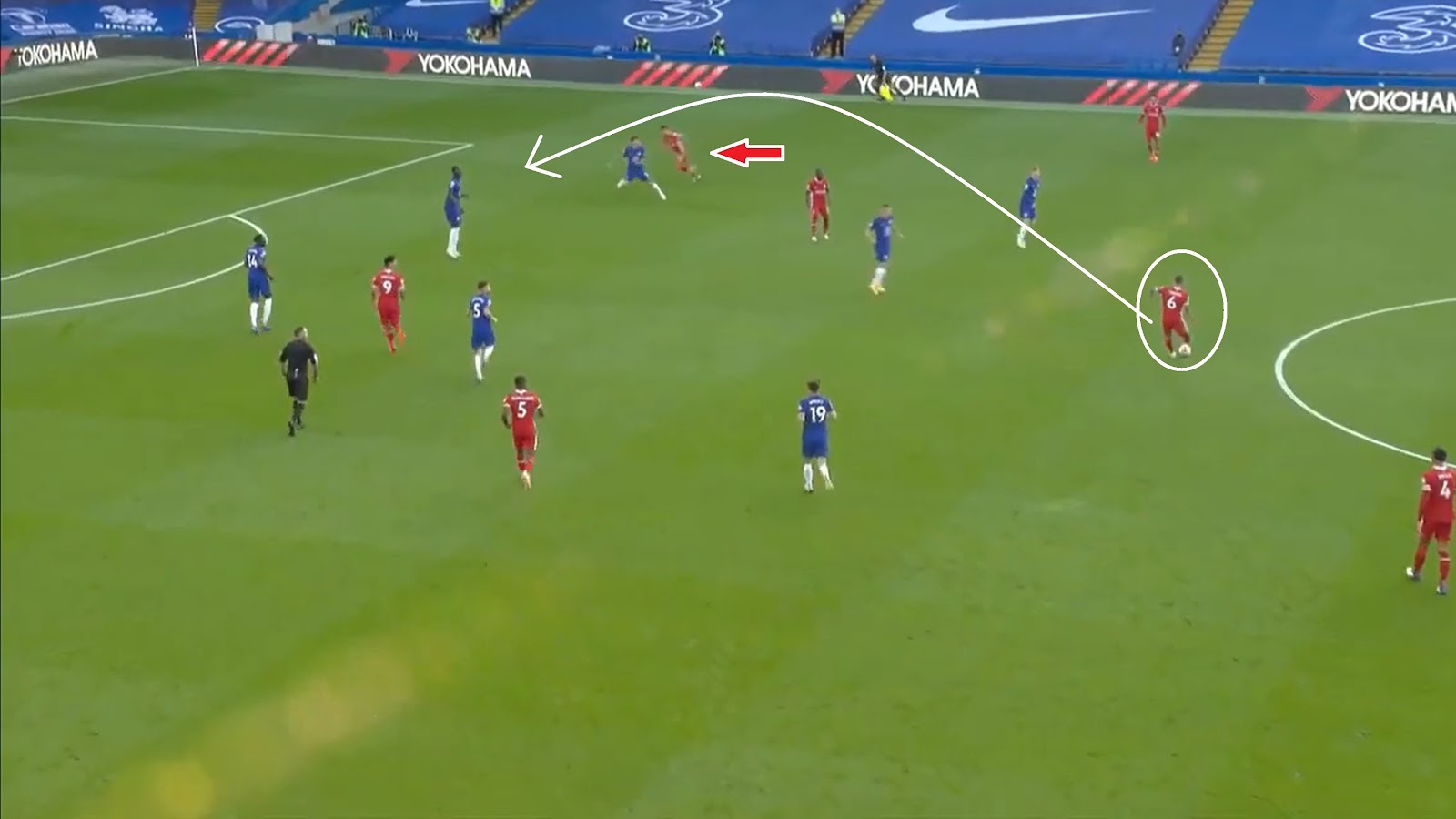 He does the same again here. Again he opens his body up as if to play the simple sideways pass, this time to Fabinho. In response to this, Chelsea left winger Mason Mount moves up ready to close down the Brazilian, which creates a gap in midfield. Thiago exploits this gap with a sharp ball into the feet of Salah. 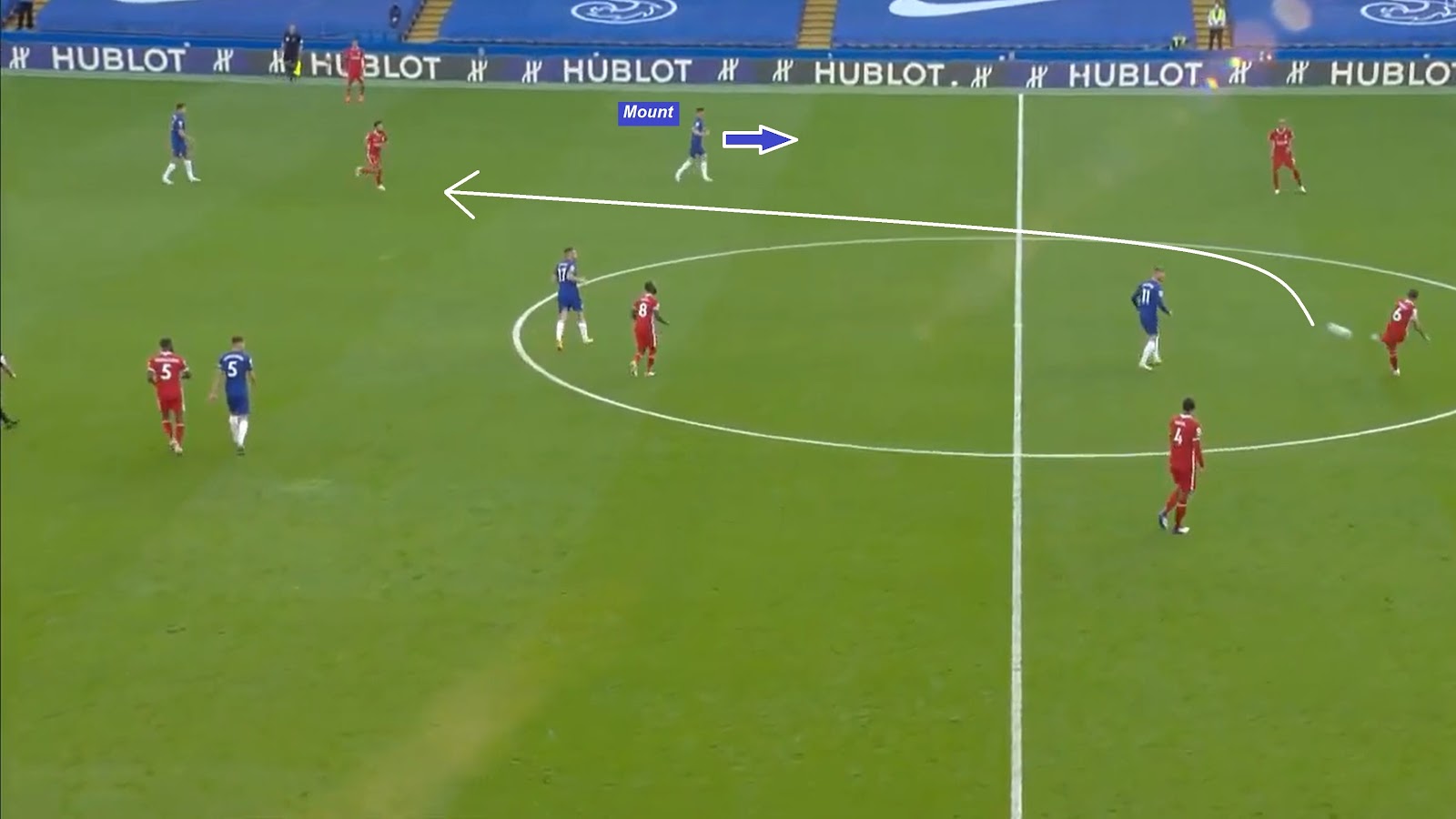 Finally, here his body language again keeps Chelsea guessing, only this time it creates a potential scoring opportunity. Again he opens his body up, and again this disguises his intentions. Instead of going sideways, he whips a cross in towards the far post area for Gini Wijnaldum's run. Perhaps deceived by his body shape, Chelsea's centre-backs fail to deepen to cover the ball over the top. Ultimately the pass is over-hit, but it's a nice idea. 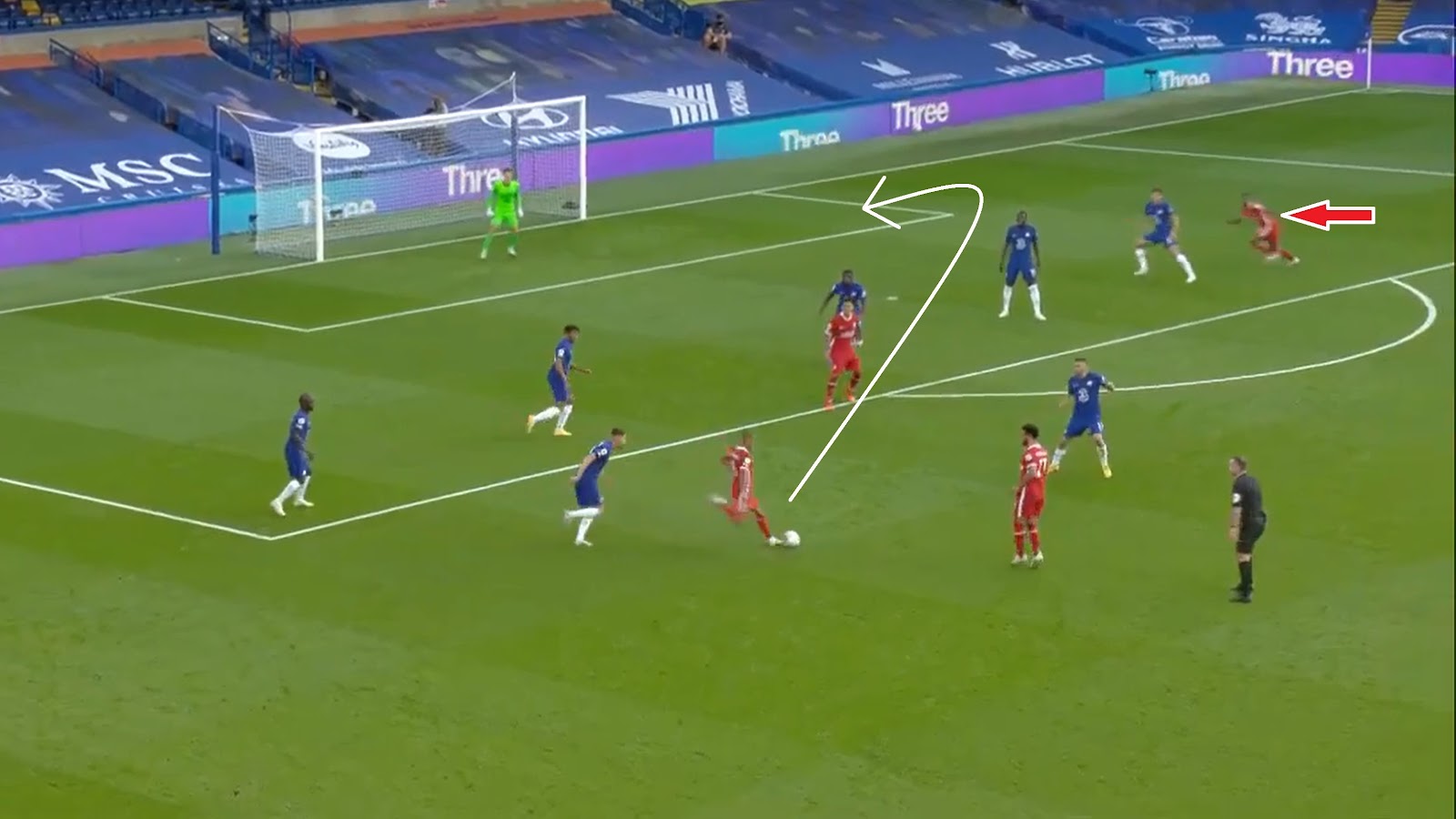 In one half of football, Thiago played more passes than anyone else on the pitch bar three players – Fabinho, Robertson and Van Dijk. According to Opta data he completed more passes in 45 minutes than anybody has since they started producing passing stats 17 years ago. His impact on the game was so important and so instant that Chelsea boss Frank Lampard assigned his main attacking weapon, Timo Werner, to a man-marking job. 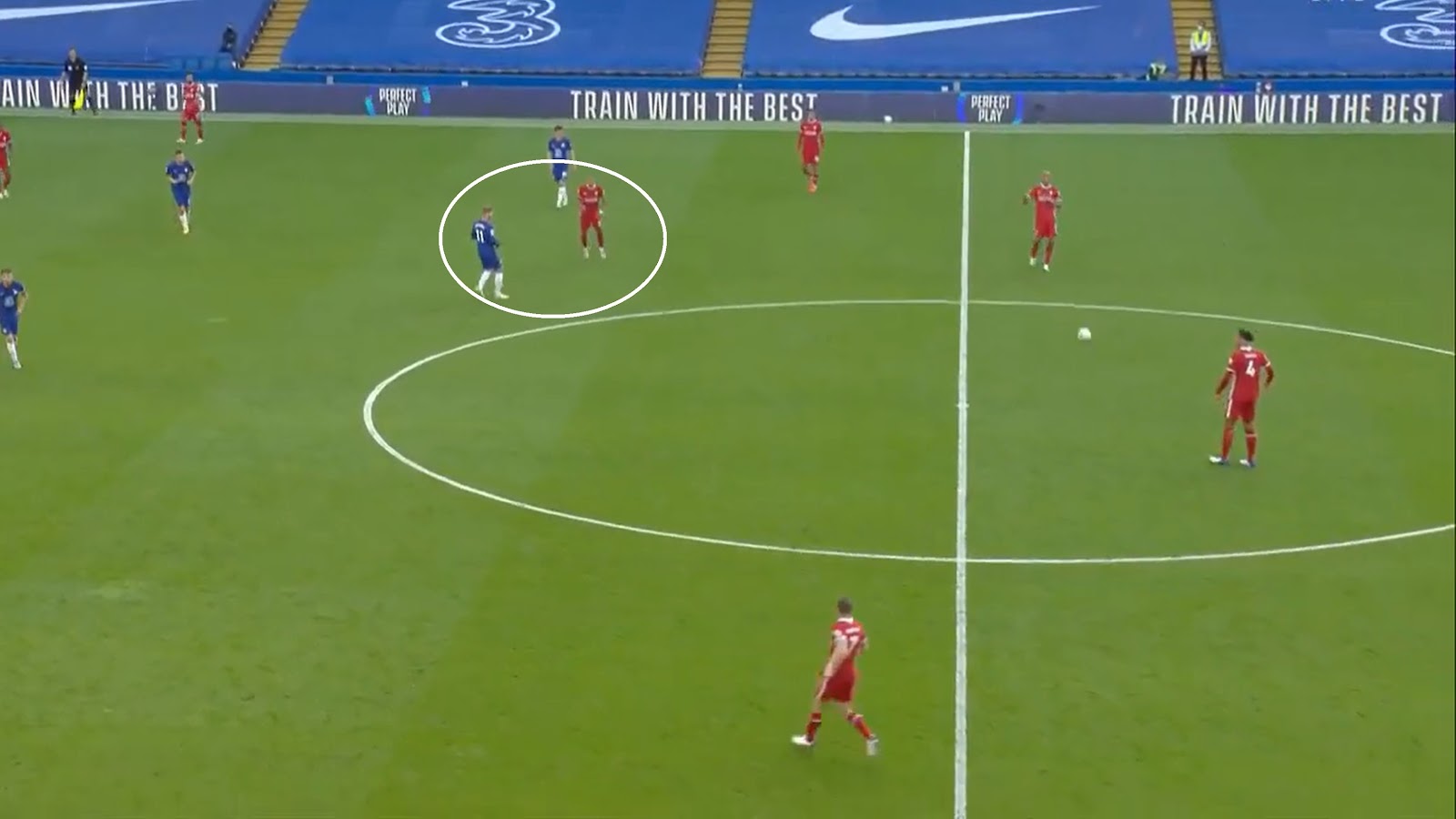 Werner had to follow Thiago wherever he went to try and either block him from receiving, or close him down when he did receive. It didn't really make much difference, but it did underline how quickly Premier League managers will have to adapt when Liverpool play their new No.6. 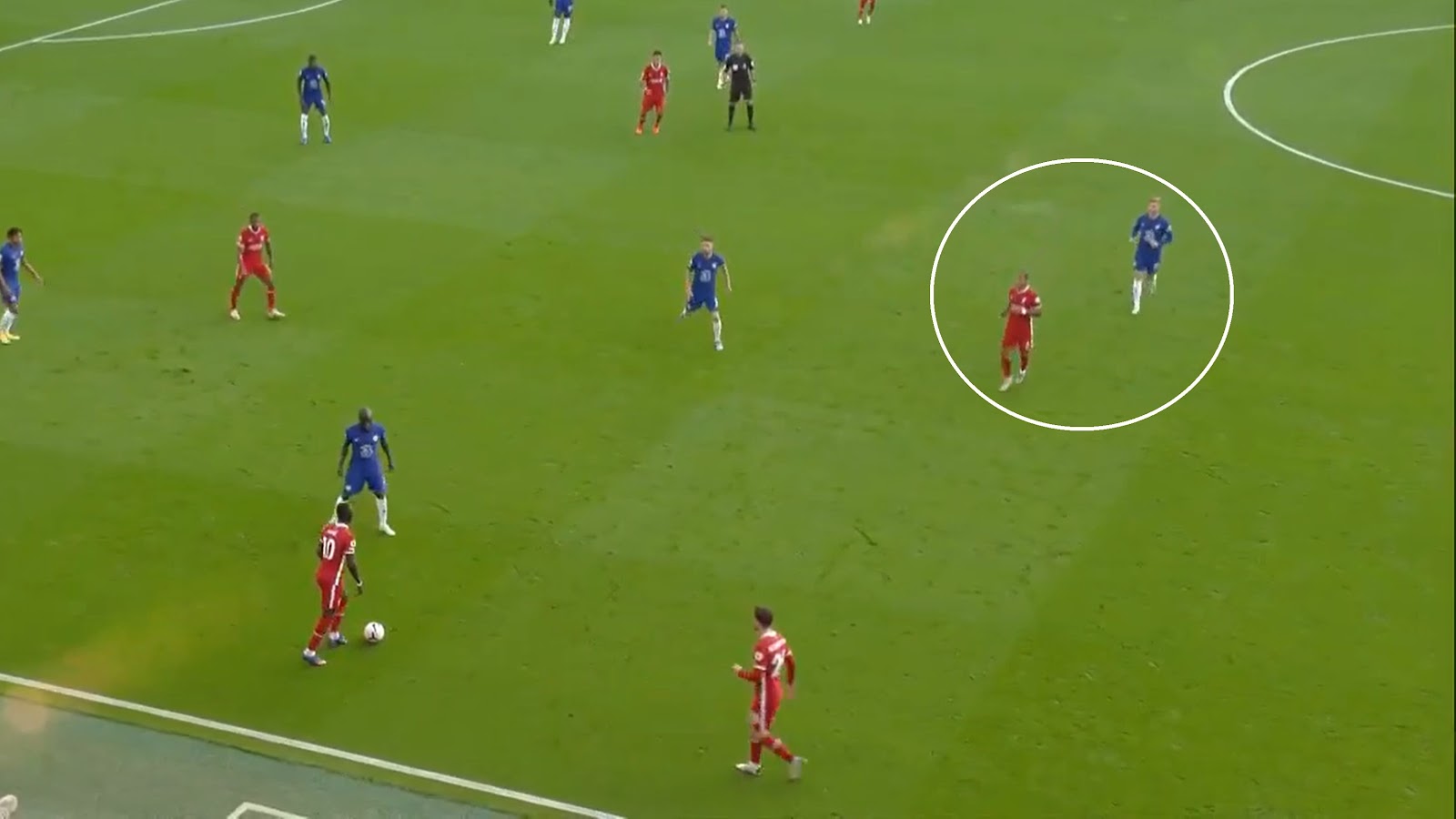 Thiago enjoyed a positive debut for Liverpool all in all, even if he did give away a penalty. One-versus-one defending isn't his strong point and it surely isn't what he has been brought in to do. That will be left to the likes of Fabinho and Henderson, who are both better in defensive duels with their combination of strength, frame, aggression, and reading of play.

There are clear differences between Thiago and Liverpool's other midfielders, too. Wijnaldum is more dynamic and likes to attack more, providing a threat in the air on crosses. Alex Oxlade-Chamberlain is more energetic and gives box-to-box support. Naby Keita is arguably the closest match, but he prefers to operate in more advanced areas rather than receiving from the centre-backs.

Comparing him to Liverpool's previous first-choice midfield three, Thiago may not be as defensively sound as Fabinho, as aggressive or influential as Henderson, or as impactful in the final third as Wijnaldum, but he is a better passer. Last season he averaged significantly more passes per game and played more long passes per game than the other three, whilst maintaining a 90.5% accuracy which was only (just) bettered by Wijnaldum with 90.8.

(For context, Wijnaldum also averaged 31 fewer passes than Thiago and kept things simpler, with fewer key passes and fewer long balls. All of this may explain why he achieved a slightly higher pass accuracy than Thiago.) 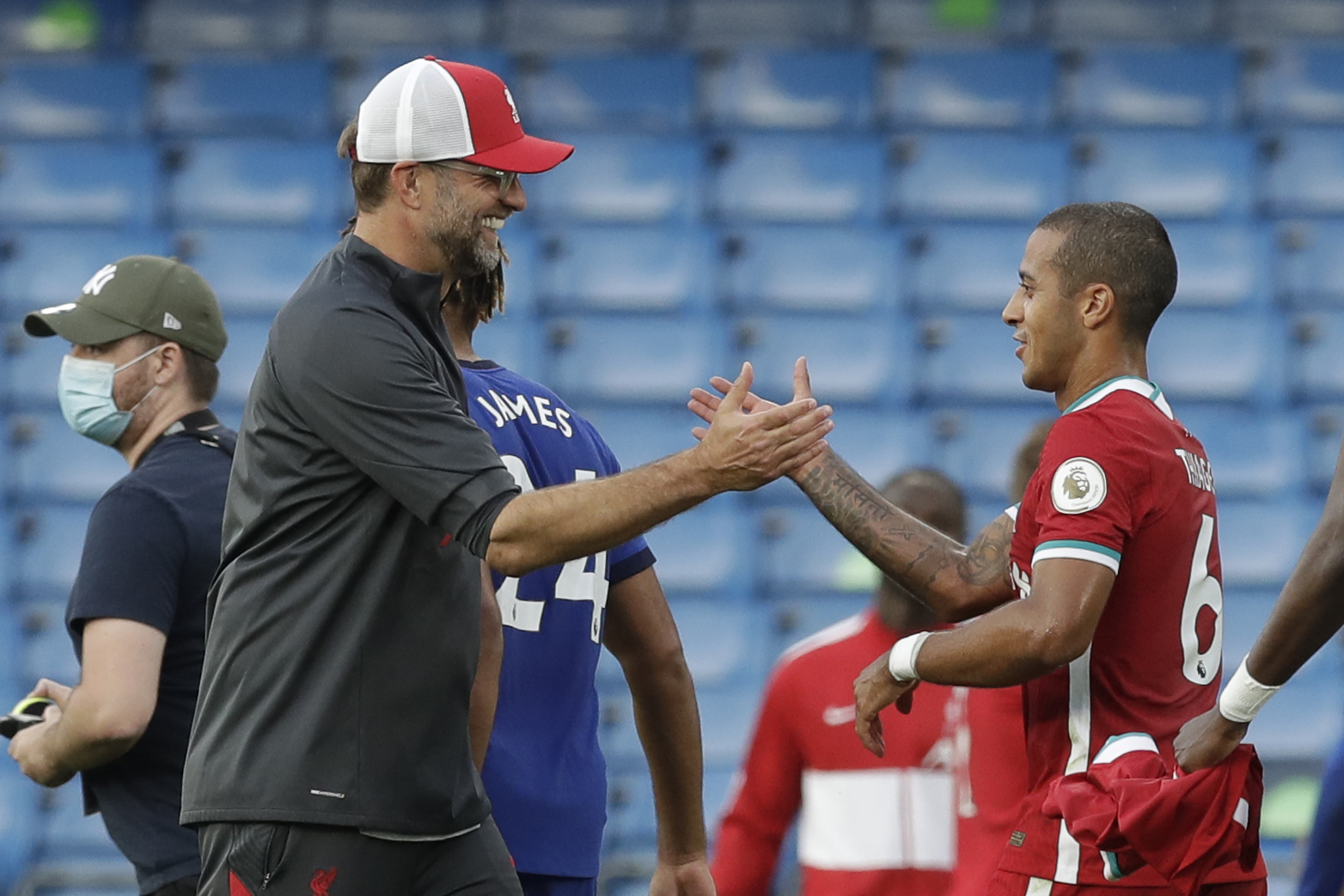 Klopp congratulating Thiago after his debut

While he didn't tackle as often as Fabinho or Henderson, Thiago did make more interceptions, averaging 1.9 per game. These defensive stats back up the notion that he isn't as strong in duels, but they also suggest he is capable when it comes to being in the right position at the right time to cut out passes. This shouldn't be a surprise – acting as a deep playmaker in a Bayern Munich team built on high pressing, he simply wouldn't have survived without possessing some defensive nous.

Considering his uniqueness when compared to his new teammates, Thiago's arrival must have some effect on Liverpool's overall style. Klopp's side have always been a high-tempo outfit utilising direct play, quick forwards, aggressive pressure, fast counter-attacks, and quality crosses. Now, however, they have a pivot who can orchestrate possession from deep and help them play forward in stages. But in order for him to do that, they need to go short from the back more often to get him on the ball.

This may mean fewer Van Dijk diagonals to find Salah over the top, and fewer flank-to-flank cross-field balls to release the full-backs into space. It may also mean fewer quick transitions and a slightly slower tempo of attack while Thiago probes. The key for England's reigning champions will be getting the balance right between maximising the playmaking skills of their new signing and maintaining the approach that has made them so successful.

In truth, they have sometimes lacked variety even during their success. One example was against Atletico Madrid in last season's Champions League second round, where Klopp's men huffed and puffed against one of Europe's most organised defences before being knocked out by swift counter-attacking.

Thiago can give Liverpool added unpredictability in possession, which may make them a more dangerous attacking outfit against these types of defensive opponent. And that may be the difference between them retaining their title and being caught up by Manchester City.

All data per WhoScored.com unless otherwise stated.