The Secrets of Success - World Cup Edition: How Low's Germany will dominate with proficiency and grace

Germany were the only team to pick up maximum points during the 2018 World Cup qualification process. They progressed through a group containing the Czech Republic, Northern Ireland and Norway, winning every game and joining Belgium as top scorers in the UEFA qualifying section with 43 goals. In addition to the impressive scoring record, they conceded just four times, keeping six clean sheets in their 10 games.

Having won the last World Cup and the 2017 Confederations Cup, Joachim Low's team go into this summer's finals among the favourites. However, results of late have not been so positive – they went five friendlies without victory, including a disappointing defeat to Austria, before getting their first win of the year against Saudi Arabia.

On top of the winless run, controversy was caused by Low's omission of Leroy Sane, who enjoyed an outstanding 2017/18 season with Manchester City. But this decision only confirmed two important points: that Germany have a huge amount of individual talent to call upon, and that Low knows exactly how he wants his players to line up going into the World Cup.

While recent results may suggest otherwise, no other team goes into the 2018 World Cup with better organisation than Germany. The only slight uncertainty regards the goalkeeper position, where Manuel Neuer is likely to start on the back of a season marred by injury. If the Bayern shot-stopper doesn't hold up, Barcelona's Marc-Andre ter Stegen provides world class backup.

Elsewhere Germany look settled. Low's 4-2-3-1 system is established, a brief flirtation with 3-4-3 against England aside, and the personnel to fill each role is equally clear. A back four of Joshua Kimmich, Jerome Boateng, Mats Hummels and Jonas Hector will be shielded by a double pivot of Sami Khedira and Toni Kroos, while line-leading Timo Werner will be supported by Thomas Muller, Mesut Ozil and Julian Draxler. 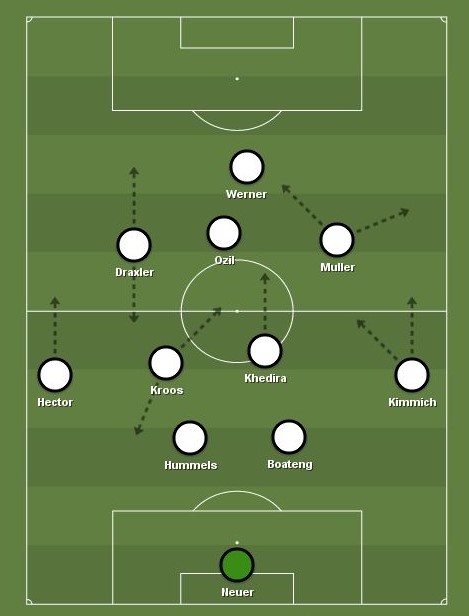 Germany have a strong positional structure which allows them not only to retain possession, but progress effectively through the thirds. The spacing between players is good and each player is aware to readjust his position when appropriate – if, for instance, Muller decides to drift wide, Kimmich will attack the right inside channel, not the flank.

Both full-backs tend to push on in the attacking phase, while Kroos drops back on the left of the centre-backs to form a three-man first build-up line. Khedira sits centrally just in front of this line, while the three attacking midfielders – Muller, Ozil and Draxler – shift vertically up and down the pitch in their respective channels. As a result of all this, Germany's 4-2-3-1 often looks more like a fluid 3-3-3-1 when attacking.

The positioning of Kroos is important to the team's build-up for several reasons. He, along with Khedira, helps to form a diamond shape with the centre-backs that is difficult for opposition teams to press due to the varying depths and widths of each player within the shape, as well as the multiple passing options available to each player. As seen against France below, should an opponent press Kroos, he can pass inside to Hummels or Khedira. 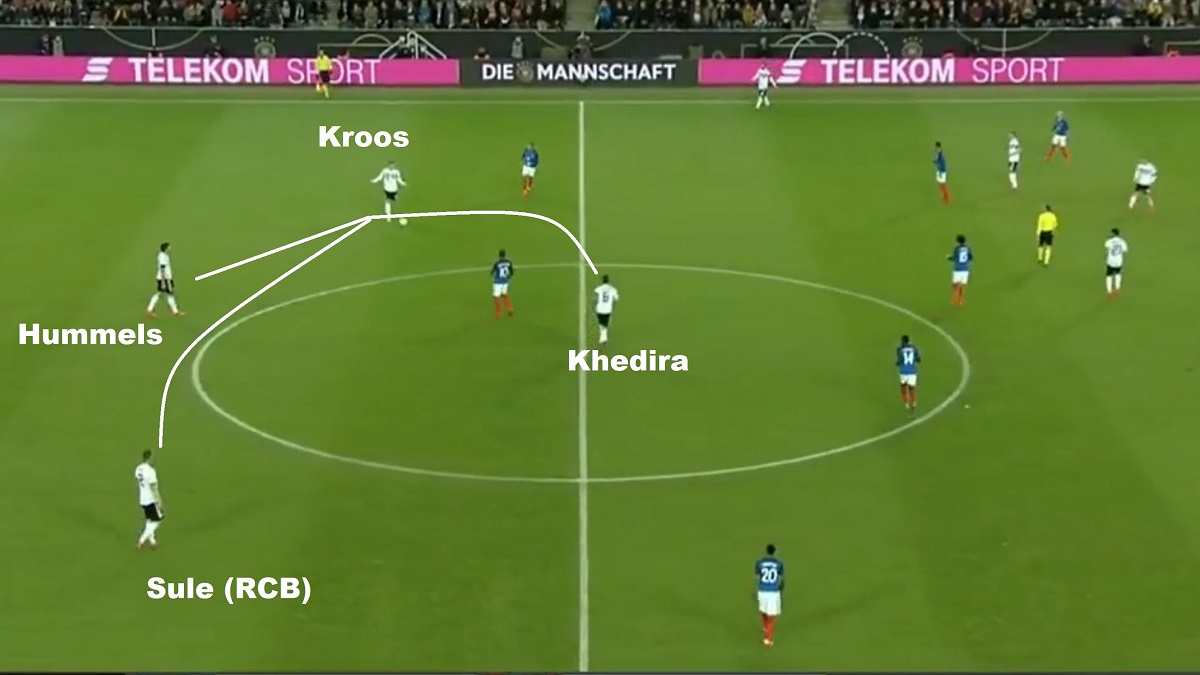 Kroos' positioning is vital in other ways, particularly against teams that do not press high. Against Saudi Arabia, he caused problems for the opposition's defensive scheme, as seen in the below graphic.

From his position in the left half-space he attracted the right-sided Saudi Arabia central midfielder out to press him. As depicted below, this only created space behind said midfielder. This space could be occupied by an attacking midfielder, who received possession and progressed the attack. 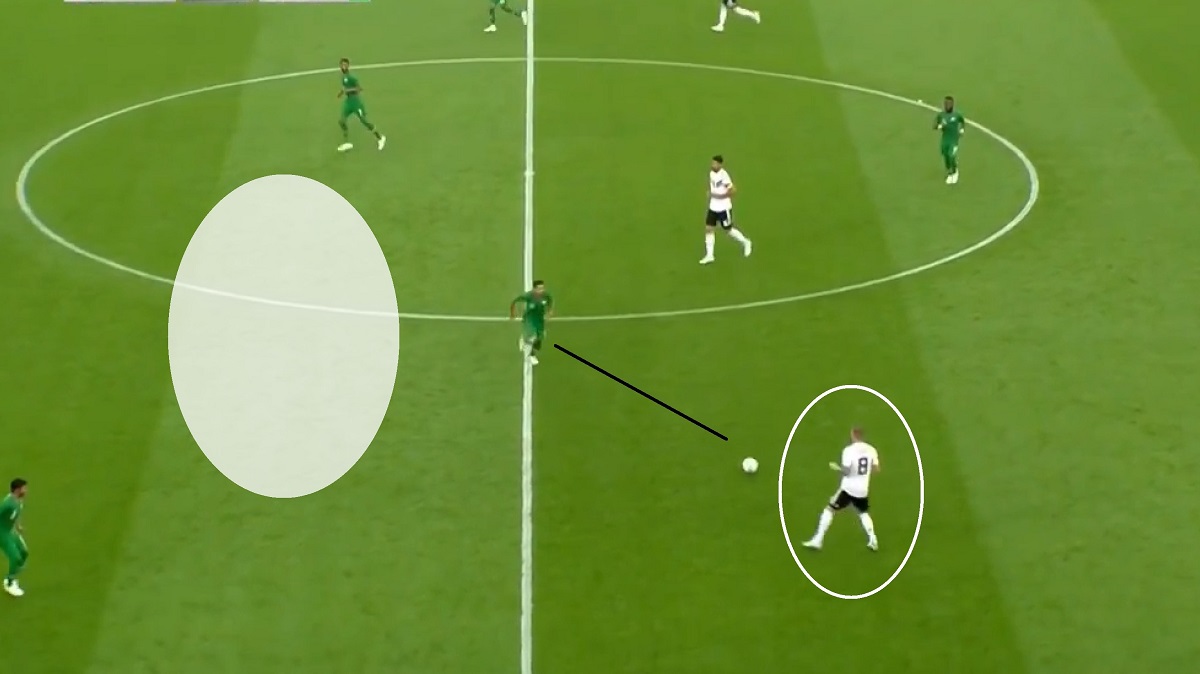 If, in the above situation, Saudi Arabia decide that their right winger should press Kroos, this leaves their right-back in a potentially dangerous 1v2 against Draxler and Hector, Germany's advancing left-back. Thus, by positioning himself in a certain way, Kroos creates a dilemma in the opposition defensive scheme that can lead to space opening up in higher areas for his teammates.

Should the opposition decide against pressing him altogether, he can dribble infield to commit defenders. Alternately, he can make use of his passing range, his position and the lack of pressure to access the centre or the left wing, or switch play to the right flank with a long ball.

While Kroos is the conductor, Germany are not entirely reliant on his positioning and passing to open up defences. Their possession game is well co-ordinated, with clear patterns in place for building attacks. The three attacking midfielders play key roles, with each one of the trident dropping deep in their vertical channel to help retain and progress possession. Their movement is difficult for the opposition defensive and midfield lines to track, meaning they often receive in time and space.

Germany do play sideways passes, though they play these passes with the intention of opening up gaps in the opponent's defensive structure to penetrate. Low's side also play diagonal balls out to runners looking to get round the outside of the opposition back line. The players making said runs then look to play cutbacks into the penalty area.

Germany aren't just effective at keeping the ball; they're also good at winning it back. Whenever they lose possession in the opposition's half they employ aggressive man-oriented counter-pressing in order to try and regain possession immediately.

If they don't succeed in counter-pressing they will settle into a medium 4-4-2 block in organised defence. One of the attacking midfielders, usually Ozil, will support Werner in the first line of pressing, while the other attacking midfielders form a midfield four with Kroos and Khedira.

Germany generally deploy a man-oriented midfield press, seen below. In this scheme, their main triggers for pressing are passes into central midfield, passes into the wide areas, or backwards passes. 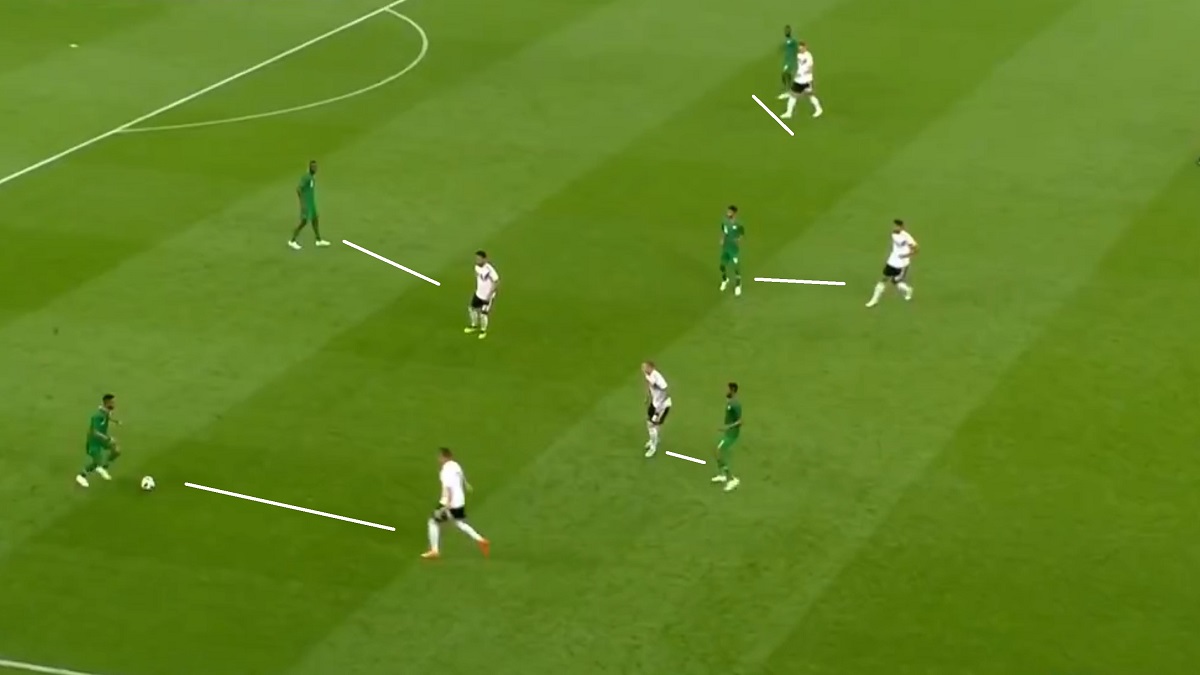 Once pressing is instigated, the back four move up to support, ensuring the space between the lines is reduced. This support is continued by Neuer, who comes well out of his penalty area when necessary to mitigate long balls over the top.

This pressing approach didn't work throughout the friendly against Spain, though Spain are a fairly unique international side; their players – thanks to immense ball control – are comfortable receiving with their back to goal and with intense pressure from behind. Against most other international sides – particularly those without a clear build-up structure or passing patterns – Germany's approach works well, forcing the opposition into an uncomfortably quick build-up.

With their aggressive pressing and strong possession game, Germany should have no trouble topping a World Cup group also featuring Mexico, Sweden and South Korea. They should also have what it takes to navigate their second round and quarter-final ties, though a potential semi-final clash with Spain represents a huge hurdle.