Accrington owner Holt demands FA punish Liverpool and Klopp: It's not THEIR football!

Barcelona senior players believe Setien changing too much too soon

Slimani pleads with Leicester to let him join Man Utd

The Secrets of Success: How Deschamps' France can convert potential into power

France qualified for the 2018 World Cup as winners of UEFA Group A, beating Sweden and the Netherlands to top spot and a berth at this summer's finals. Along the way a host of promising young players were given a chance by Didier Deschamps, meaning they enter the tournament with one of the most exciting squads in international football.

However, this is a growing French team, not the finished the article. Recent friendlies have only confirmed that, with some stodgy attacking showings suggesting there is plenty of work still to be done if Deschamps' side are to challenge the other three favourites – Brazil, Germany and Spain – in Russia.

France are likely to line up in a rough 4-3-3 system that often looks more like a 4-3-2-1 when attacking. Up front, Antoine Griezmann and Kylian Mbappe provide skill, pace and clinical finishing, though Olivier Giroud has not always looked on the same wavelength ahead of them.

There are similar personnel question marks elsewhere in the side

N'Golo Kante looks set to take up the deep-lying midfield berth, though he isn't ideally suited to the position. His high-energy approach would perhaps be better used in one of the more advanced midfield roles, with Steven N'Zonzi – who has more composure and a stronger passing range – coming in at No.6.

At full-back, both Djibril Sidibe and Benjamin Mendy's places are under some threat. Benjamin Pavard and Lucas Hernandez have played well in France's latest friendlies, but Deschamps will probably stick with his more experienced duo going into the tournament. 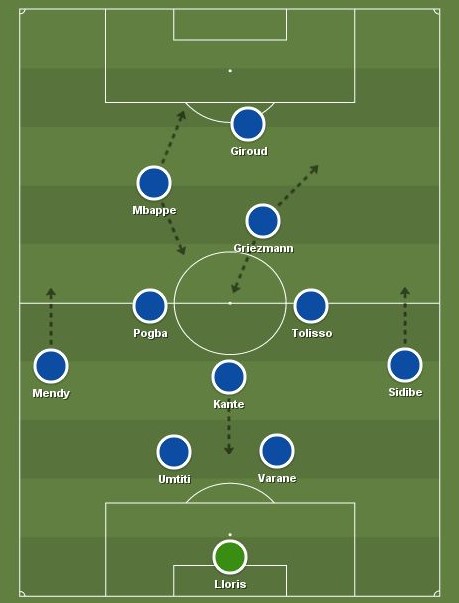 When building attacks, France's 4-3-2-1 offensive shape evolves primarily through the centre-backs splitting wide. Raphael Varane on the right and Samuel Umtiti on the left fan out, with Kante dropping deep into the central space in front of them, or between them. These movements allow both full-backs to push high down the flanks and offer wide outlets.

Deschamps' side dominate possession but do so in a fairly ineffective manner for notable spells that are punctuated by sideways passing from one full-back to the other via the centre-backs. This lack of progression is predominantly due to a poor positional structure.

The outer central midfielders often fail to re-position themselves as build-up develops. This, along with the defensive midfielder's tendency to drop back, leads to a lack of central presence, little to no connection between the midfielders and the centre-backs, and no possibility for combinations between the midfielders. All of this makes it almost impossible for France to progress possession through the centre, and so they are instead forced to go wide and around using their full-backs.

An example of this issue is seen in the below graphic. Against the Republic of Ireland, right-back Sidibe has no option but to pass back to Adil Rami, the right-sided centre-back. However, the three central midfielders (circled) are all covered and fail to adjust their positions either to become free or to simply reduce the distance between themselves and the ball-player. Under pressure and without any immediate out-ball, Rami kicks it out for a throw-in to the opposition. 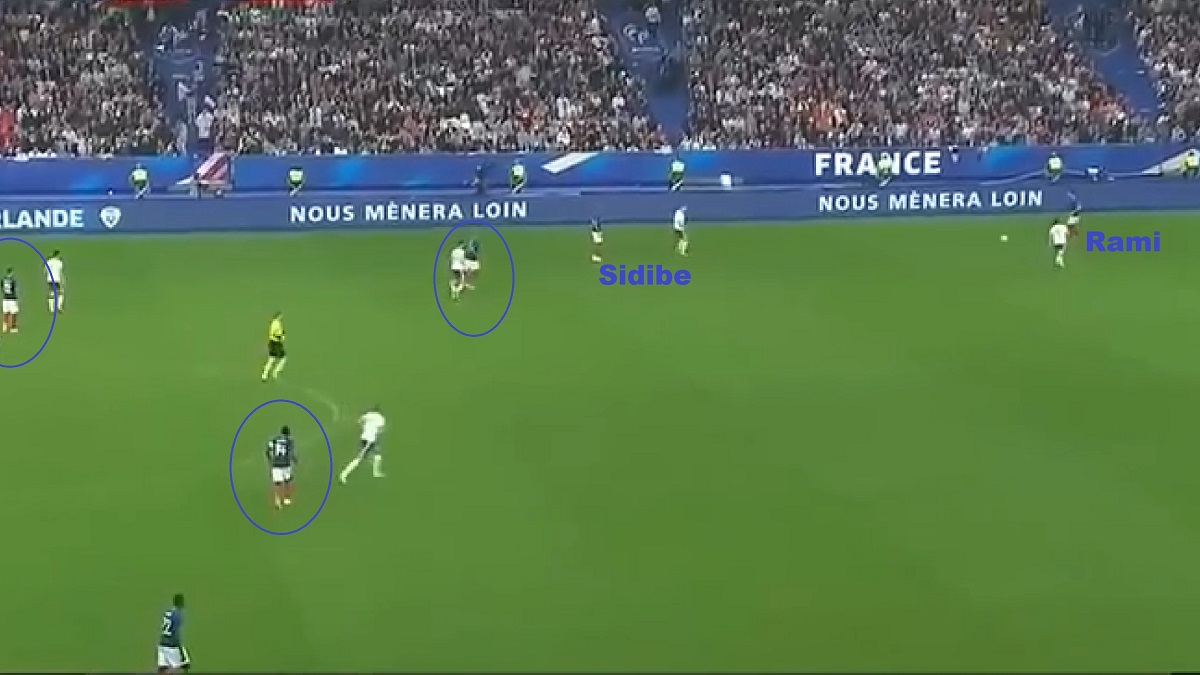 Due to the aforementioned possession issues, there is a great deal of responsibility on France's front three – mainly Griezmann and Mbappe – to drop back to create penetrative central passes for the likes of Varane and Umtiti to utilise. Griezmann is particularly influential in this respect, often drifting towards the ball from behind a distracted opposition midfield line to find space.

Mbappe also tends to peel off the front line and combines well with Griezmann between the lines. The 19-year-old forward, who enjoyed an excellent debut season with Paris Saint-Germain, looks to drag a marker with him before attacking the vacant space behind with a layoff followed by a quick turn.

In defensive transitions, France regularly employ counter-pressing to win the ball back immediately after being dispossessed high up the pitch. They tend to focus on pressing the opposition ball-player's passing lanes in such situations, as seen below against Italy. Here, Kante steps up to cut off one passing lane and Mbappe uses his body position to take away at least two other passing lanes. This, along with Griezmann pressing the man, aims to reduce the ball-player's time and options. 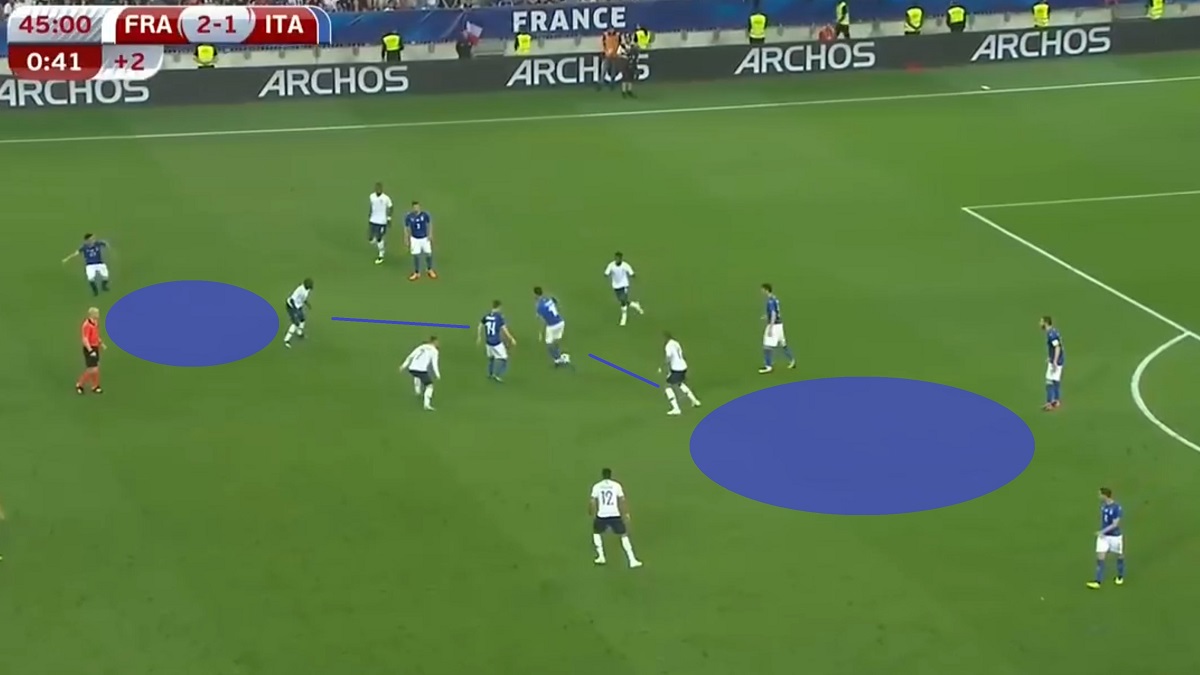 In organised defence France's 4-3-3 is fairly unique in that it doesn't turn into a 4-5-1. Rather, the frontmen remain clearly separated from the central midfield three, forming a narrow trident with a positional emphasis in that they look primarily to block passes into the centre.

The first line of defence can be played around thanks not only to the central orientation of Griezmann, Giroud and Mbappe, but their failure to provide consistent backwards pressing. However, if they are played through there is far greater aggression in France's man-oriented midfield pressing.

Deschamps' defensive structure is not without its flaws, though the mobility throughout the line-up helps to paper over many cracks. Several players – Kante and Blaise Matuidi being the best examples – are able to cover ground quickly and intelligently, which helps to make up for any defensive gaps that may appear.

When they win the ball back, France look to make full use of their aforementioned pace, springing immediate counter-attacks. Mbappe looks to attack the opposition back line, with Griezmann supporting centrally. Meanwhile, both full-backs look to bomb on down their flanks. The speed of these runs, as well as the quality of the individuals executing them, is difficult for opponents to deal with.

The below graphic illustrates the chaos France can cause in such situations. Kante wins the ball in midfield and instigates a counter-attack. Griezmann (circled) supports the counter from deep while Mbappe (top right) looks to attack the highlighted space behind a USA centre-back who is facing the ball. Sidibe, the right-back, attacks the highlighted vacant space behind a USA midfielder who, again, is drawn towards the ball. 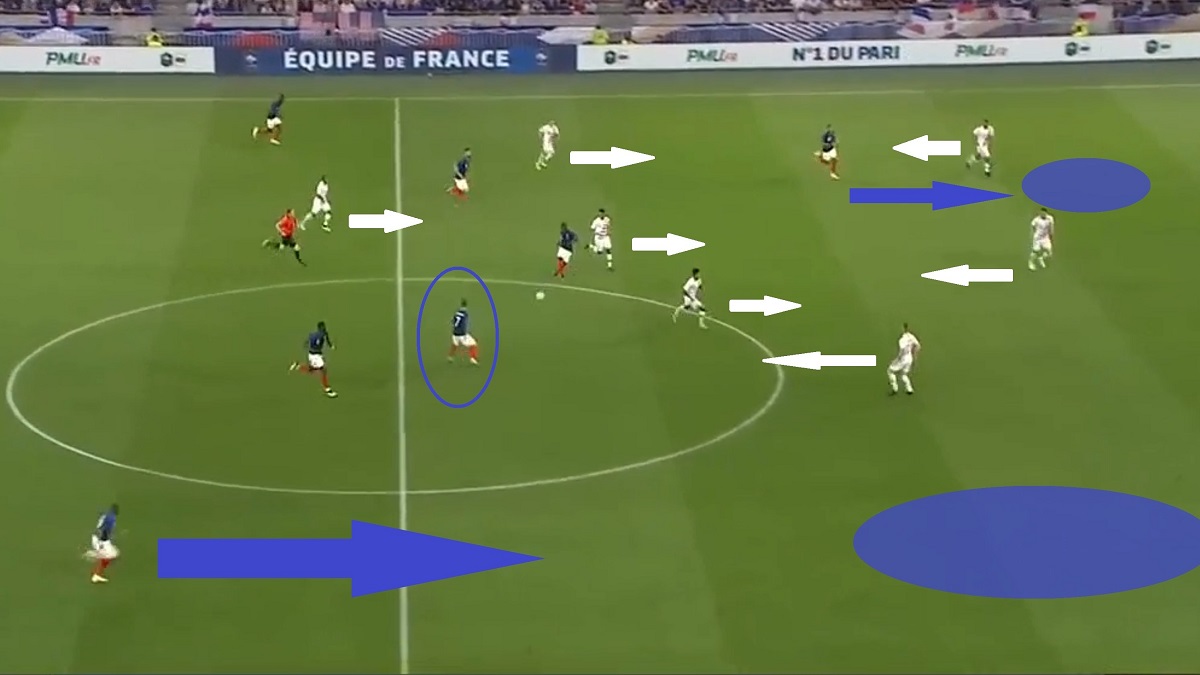 With runs being made in different areas of the pitch and on different lines, at high speed, while the creative Griezmann supports from a deeper space, there are a variety of threats developing simultaneously that the opposition defence must cope with, and they do not have much time to work out how to do so.

France may have a hard time taking maximum points from a World Cup group containing Denmark, Peru and Australia, especially as their rigid possession game will likely be tested by resolute deep defences. However, if they can navigate their way beyond the group, their transition game could do damage to just about any rival in the tournament's knockout rounds.