The Bruno Lage effect: How detailed and efficient tactics have Wolves pushing for Europe

It has taken an unusually long time for Wolverhampton Wanderers to get recognition for the superb season they are having. It is only now, after winning five of the last six Premier League matches to move within six points of the top four with two games in hand, that Wolves are starting to get some attention.

This is partly because those games in hand have made the league table, and Wolves' position, difficult to read. It is partly because our opinions tend to stick early in the season and Bruno Lage lost his first three games in charge. But most of all, it is because Wolves just aren't very interesting to watch.

There have been just 41 goals in their matches. They have kept 11 clean sheets and failed to score on nine occasions. It is no coincidence that this sudden flurry of attention coincides with their goals per game rate having climbed from 1.5 to 2.6 over the last five matches.

Wolves don't tend to get much time on highlights packages. Often there are very few highlights to show, and because of this their tactical style under Lage, a clear evolution from the Nuno Espirito Santo years, has not been talked about as much as it should.

Lage has consistently deployed a 3-4-3 formation this season and indeed there are many similarities with how his predecessor approached things. After a more expansive and high pressing start to the season led to consecutive defeats Lage decided to drop things back and focus on compressing space, rather than hunting the ball down.

Wolves will press immediately after losing possession, but only briefly, before forming a ruthessly-organised midblock that minimises space between players and looks to hold the opponent at arms' length. The line is 20 yards higher than it was under Nuno and yet there is no denying it is a conservative system by modern standards; per FBRef, Wolves rank third in the division for pressures in their own third and 20th for pressures in the final third. The pattern is clear.

Their success this season is largely the result of just how effectively they are coached in this approach, playing far less open than in the 2020/21 campaign – as evidenced by the fact their PPDA has dropped significantly, from 19.93 last season to 14.34, which is still the third highest in the division.

However, understat.com calculate Wolves' xGA (expected goals against) as 30.62, suggesting they 'should' have conceded 12 more goals than they actually have – a difference almost twice as large as any other Premier League team is out-performing their xGA. Perhaps, then, they have got a bit lucky with their opponents' poor finishing, although it might also reflect just how good Jose Sa has been. 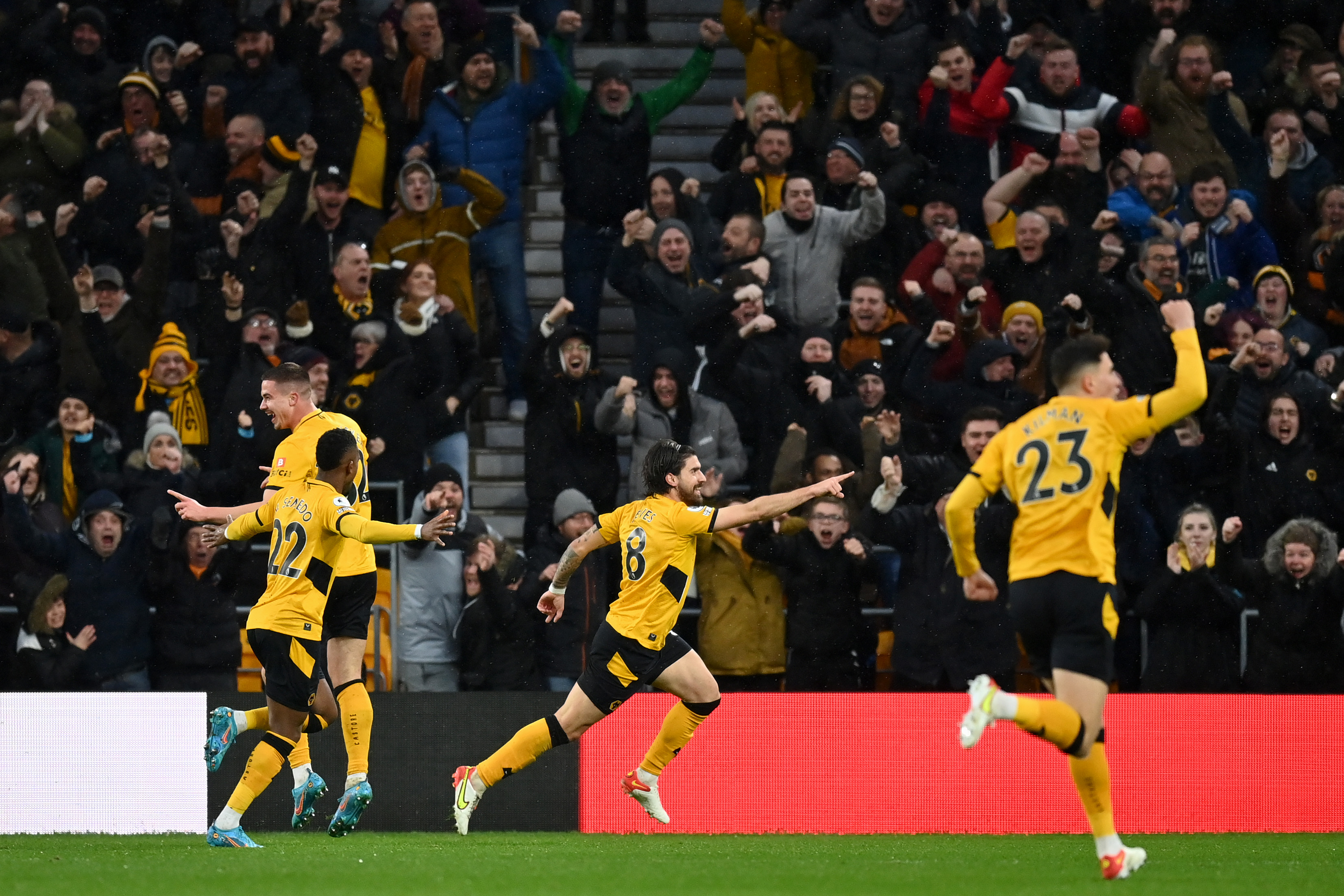 Ruben Neves scores for Wolves in victory over Leicester

On the ball, Wolves are very different to how they played under Nuno. The long balls and percentage passes, the reliance on directness, have all been replaced by a desire to play neatly through the lines. There are many signs that Lage coaches in meticulous detail, such as the fact Wolves often play the same three- or four-point moves to progress the ball. It is likely Lage believes in 'automatisms': set-plays in which specific movements and passes are drilled repeatedly in training.

One common feature is for Wolves to build down one flank, packing the wing with bodies to create neat triangles and drag the opponent out to one side, before switching the play quickly to get an overload on the opposite flank. It is also common to see the centre-backs play sharp vertical ground passes into the two inside forwards, while Raul Jiminez is more of a creative presence than a target man these days.

It is noteworthy that Wolves rank 19th for crosses (15 per match) having been second last season – a clear example of how Nuno's directness and old-school has been replaced by a desire to retain possession and pass carefully into the final third. As with the defensive work, this is all about control: Lage's team are strangling matches, either by sitting off and shuffling across in those compact lines, or by holding possession and slowing things down.

It has led to a lack of goals at both ends, and yet something has shifted over the last few weeks. Most obviously, Adama Traore – the man almost single-handedly responsible for Wolves topping the charts for dribbles (12.6 per game) – has moved to Barcelona, removing that renegade option from the bench that had allowed Lage to keep things tight at 0-0 and wait for Traore to shake things up.

Elsewhere the change would appear to be largely a regression to the mean, judging by Wolves' xG numbers, coupled with the good form of Raul Jimenez and Daniel Podence, the latter adding a final ball to his game over the last few weeks.

Unfortunately it is unlikely to be enough for Wolves to qualify for the Champions League. Had we not had the postponements that make the table difficult to read, Wolves would probably be behind Man Utd, Arsenal, and Tottenham Hotspur, and while Lage's side are currently working at their peak those other three are all gradually improving.

Nevertheless Europa League qualification is well within their grasp, thanks to a detailed and efficient tactical methodology based around absolute control. Lage, and Wolves fans, certainly won't care that it isn't thrilling to watch.