It was another eventful week in the Premier League, with three red cards, controversial decisions and a fiery North London derby.

Liverpool and Manchester City once again showed who is boss and it was a case of more frustration for both Manchester United and Chelsea.

We here at Tribalfootball look at the top performers from Matchday 4 in the Tribal Football Team Of The Week. 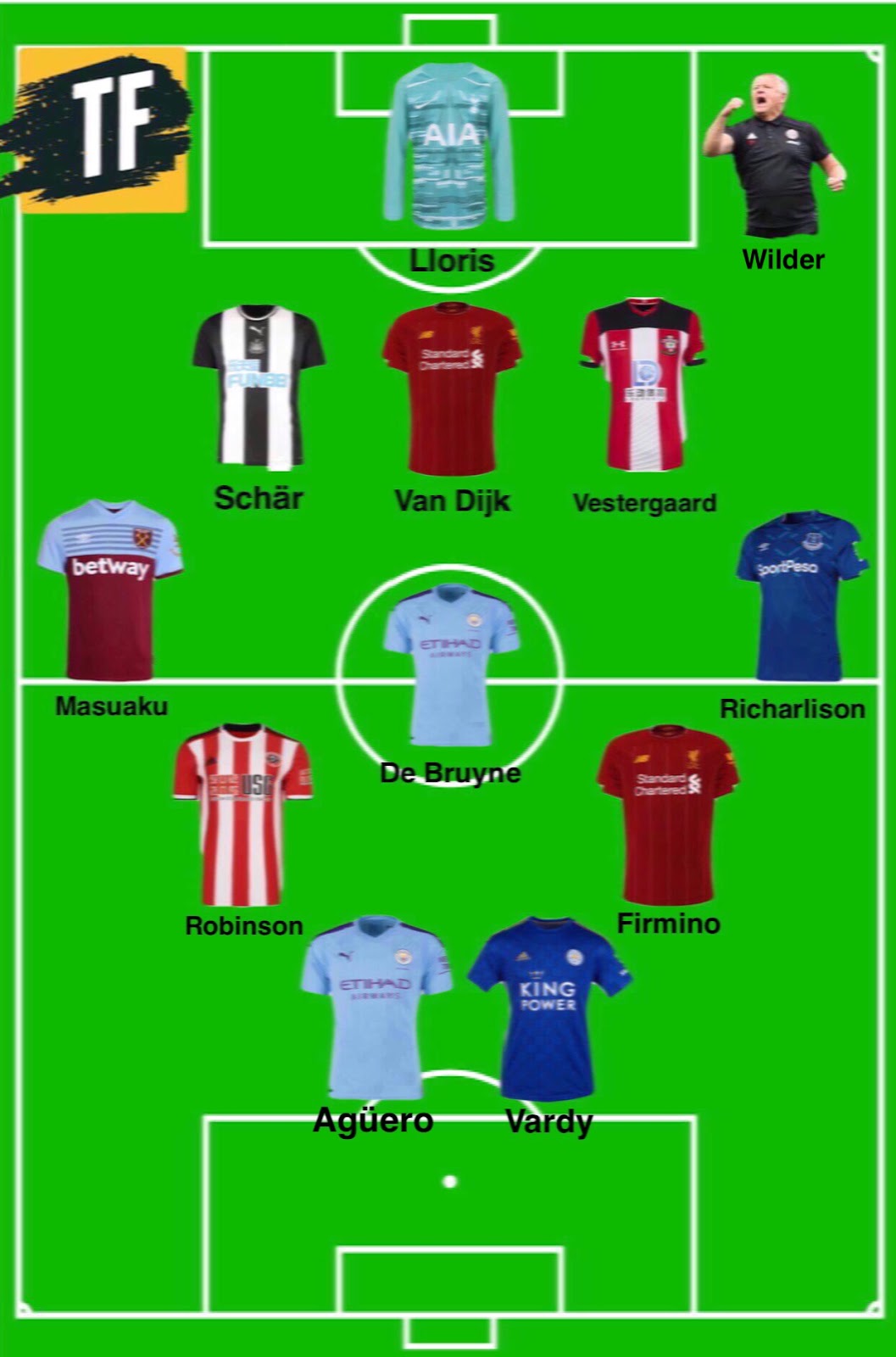 Despite conceding two goals in the London Derby, the Frenchman was huge between the sticks at the weekend, claiming a point away from home.

Lloris made a huge 6 saves, the majority of them incredibly sharp as well as playing 12 accurate long balls. It it wasn't for him it could've been a dower day for the Tottenham faithful.

Vestergaard produced a dominant performance against Man United as they held out for a significant point. The Danish defender stood large at 6'7'', making 5 interceptions, 4 interceptions and a couple of crucial blocks.

At the other end of the pitch, from a corner Vestergaard rose highest and headed the ball into the back of the net to secure a point.

It took a different performance from the Swiss to make it into the Team of the Week. Rather than the unbreachable centre-back who kept out Tottenham last week, Schär's creative prowess was on display against a lackluster Watford.

Keeping Watford toothless after a fortuitous early goal, Schär was key to Newcastle moving the ball forward and in one of his many forays forward, found his way into the box and expertly dispatched the equaliser.

It was only a matter of time before the favourite for the Ballon D'or made his way into the team of the week. It was an unsurprisingly robust performance from the Dutchman who was a rock in Liverpool's 0-3 win over Burnley.

Keeping the hosts to only 2 shots on target, Van Dijk had a massive 11 clearances and won 12 aerial duels.

In the hammers 2-0 win over the canaries, it was the pacey Congolese wingback who lead the way at the London Stadium. Masuaku was strong both in defence and going forward. One of his dashing runs down the left wing saw him put the ball on a plate for Sebastian Haller to open the scoring.

Everton's Brazilian Richarlison was damaging down the right hand side for Everton in their 3-2 win over Wolves at Goodison Park.

Richarlison scored both the opening goal and the closing goal to snatch all 3 points at home. He had 3/3 shots on target in the game, 2 dribbles, 4 accurate long balls and 1 key pass.

It is often hard to recognise the outstanding performances of individuals when they perform at a high level, on such a consistent basis. This is largely the case for the whole Manchester City side, who's 4-0 drubbing of Brighton is nothing short of expected.

Kevin De Bruyne was again one of the stars for City, with the opening goal of the game along with an assist for an Aguero goal. He had 4 shots on goal in total, 2 key passes, 4 accurate long balls and a pass accuracy of 88.2%

In the blades inspired second-half comeback, it was Callum Robinson who was the main catalyst for Sheffield United's unlikely point at Stamford Bridge.

He scored the Blades first goal and put a dangerous ball into the box which Zouma deflected into his own net to level the scores. In total, Robinson had 4 shots on goal and operated at 100% passing accuracy.

This week it was time for the Brazilian to be the focal point of Liverpool's devastating front line. Firmino had 5 shots on goal, won 4 aerial duels, registered 2 key passes and 3 dribbles. Along with that he assisted the 2nd goal Mane goal and scored a lovely goal from outside the box to put the game beyond doubt.

His goal meant that he was the first Brazilian in the history of the Premier League to score 50 goals.

Although the goals never seem to cease under Aguero's reign at the Etihad stadium, it appears that Kun was back to his best on the weekend. Scoring 2 absolute peach goals along with an assist, Aguero highlighted his dangerous presence as the spearline of the City attack.

Aguero is hitting a purple patch of form, off the back of 29 goals in his last 23 appearances at the Etihad.

Jamie Vardy was typical Jamie Vardy in Leicester's 3-1 win over Bournemouth. Dashing in behind defences with clinical finishing is what has seen him rise to the top level of Premier League strikers.

Vardy scored two great goals, the first and exquisite long range volley over the oncoming goalkeeper and the second a fist time shot to ice the game.

With the difficult proposition of being 2-0 down to Chelsea away from home, it took a gutsy performance to peg back such a lead. Wilder had to sacrifice his defensive mentality, bringing on two strikers and while keeping the Blues goalless managed to score 2 goals.

It was definitely an important point for the Blades after a disappointing loss at home to Leicester last week.

Another substitute making an immediate impact off the bench this time at the Etihad. Bernardo Silva came onto the field in the 77th minute and only after seconds of being on the pitch put the ball past Matt Ryan compounding Brighton's misery at 4-0.

Put through by a long ball from Ben Chilwell, Jamie Vardy charged cleared of the defending pack. With the ball bouncing and the keeper off his line, Vardy decided to volley the bouncing ball from well outside the box, lobbing the ball over the keeper into the unguarded net.

It may be one of the most controversial calls of the weekend at Selhurst Park. 1-0 down away from home, Aston Villa gallivanted forward in the 95th minute in an attack on goal.

The Villa talisman Jack Grealish with the ball at his feet dribbled his way into the area and passed the ball out to Henri Lansbury who curled the ball into the far corner to level the scores. However the goal was subsequently chalked off as Grealish was booked for diving, after playing the pass but before the ball was in the back of the net.

It was a huge decision that could have damaging effects for Villains.